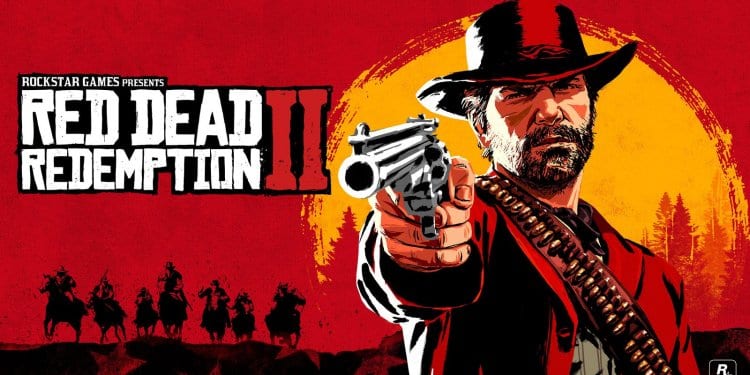 Red Dead Redemption 2 is a game years in the making and I will say without a doubt is an absolute masterpiece. RDR2 is the prequel to Red Dead Redemption and takes place in 1899, a time when the Wild West was dying and civilization was spreading. You play as Outlaw Arthur Morgan and have the capability to use a wide variety of guns from both the Wild West days and the new century sneaking up on the outlaws. 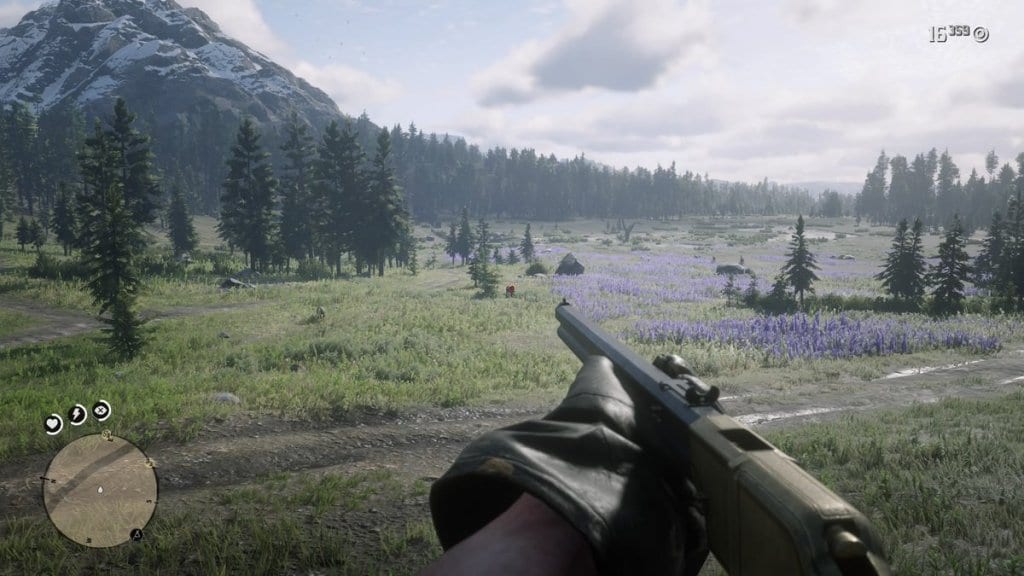 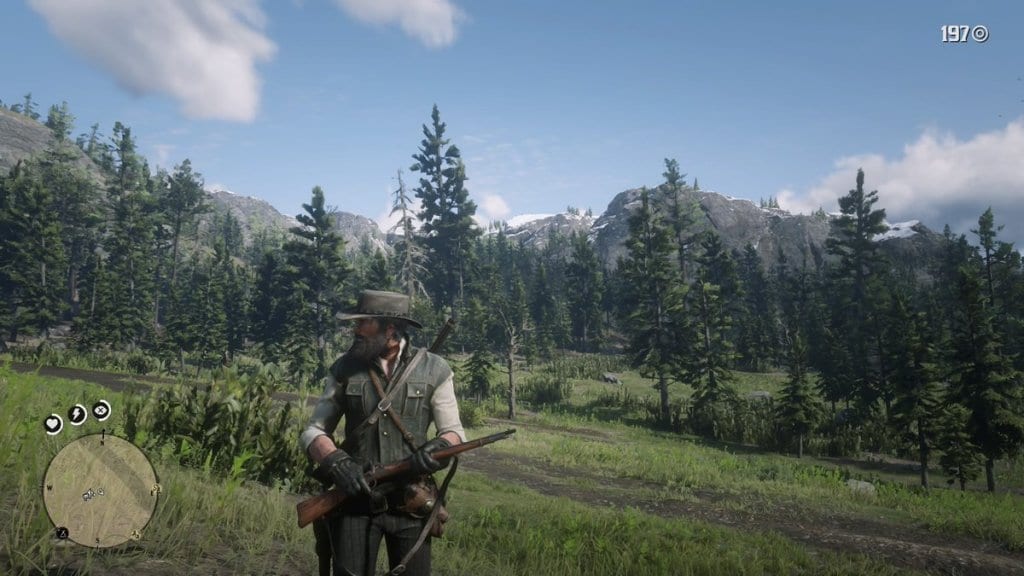 Red Dead Redemption 2 does suffer from the same problems all guns have, and that’s nonsensical stats, especially when it comes to accuracy and power. You expect a rifle or shotgun to do more damage than a revolver. However, why does Revolver A do more than Revolver B when they use the same ammo? This applies to rifles and shotguns as well. As realistic as the guns of RDR2 they still have to be balanced to create a fun and rewarding game.

Enough of that, let’s look, and talk about the guns of Red Dead Redemption 2.

Called the Cattleman in the game this classic revolver is the most common gun in the game. It’s Arthur Morgan’s starting weapon. You can add a longer barrel for a Calvary model and you can also find several special models with slightly different stats and radically different looks. 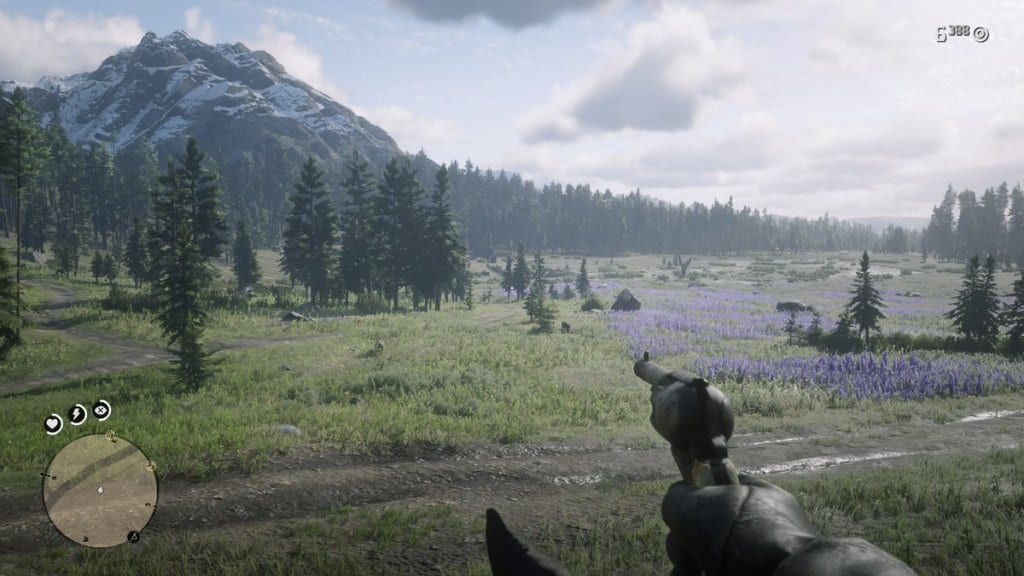 In game, it’s an average gun that doesn’t excel at anything. The Colt SAA is an absolute legend when it comes to the old west and revolvers in general, Colt still produces them in very limited numbers to this day. 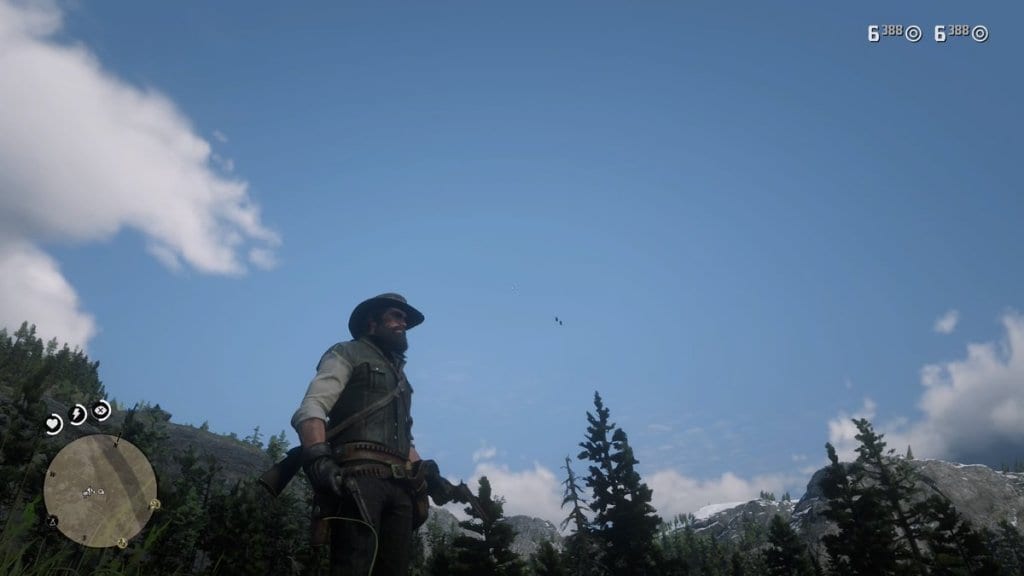 The Scholfield is another gun that’s easy to get relatively early in the game. This gun was always an underrated weapon in my opinion. Originally built by Smith and Wesson for the Russian empire. This gun was named after Major George Scholfield after he made several changes to fit cavalry needs. It does more damage than the Cattleman but has a slower fire and reload rate which makes no sense. A break top gun would theoretically be faster to reload and there is no reason it would be slower to fire. 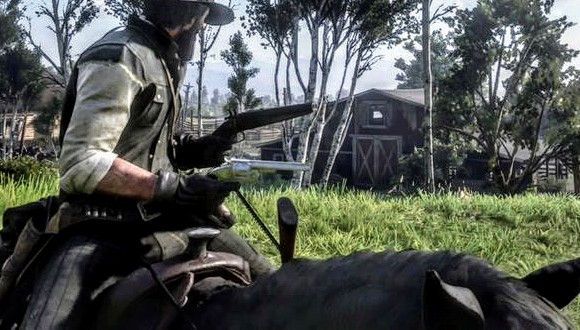 The Colt 1892 Army and Navy Revolver

The Colt 1892, is known as the Double Action Revolver in the game. This was the first double action revolver used by the United States military. Famously this was the gun in use in the Philippines that failed to stop charging Filipino rebels.  It sports a much faster rate of fire, and when dual wielded can be quite handy. 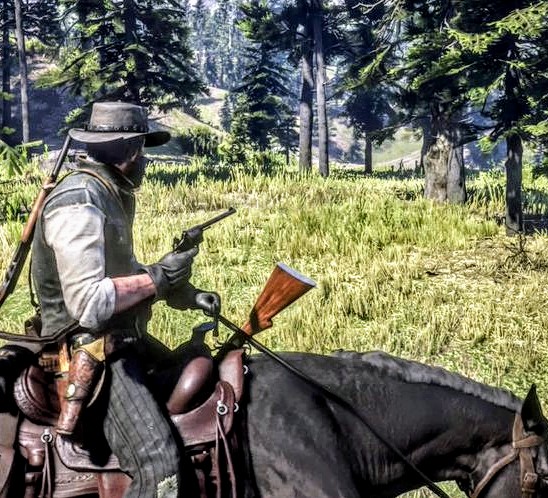 The C96 is an oddball with its automatic action and high-velocity round in the days of 45 Colt revolvers. It was an early semi-automatic pistol that saw worldwide use. This gun was adopted widely in military and police service, from France to Turkey this gun served around the world. In the game, you can get a special model in chapter 2 and its a rapid firing, quick reloading gun. 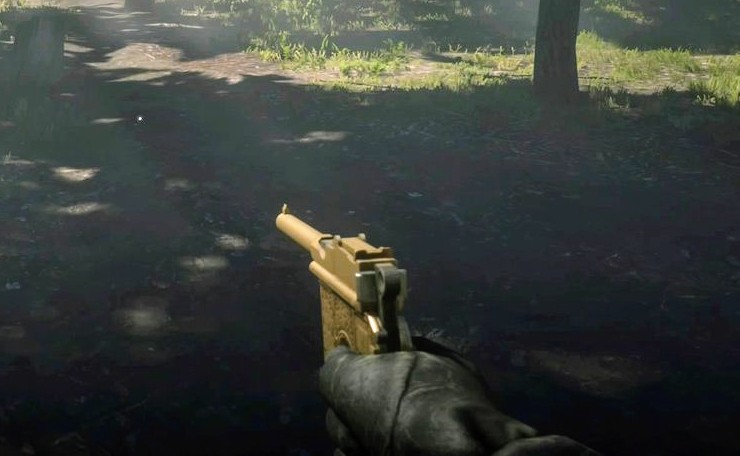 The C-93 is the definition of over-engineering in action. This is the daddy to the famed Luger pistols and was the first mass-produced semi-automatic pistol. It used a removable box magazine and was rapid to reload in the days when most shells had to be manually ejected from revolvers. An odd sight in the game and I doubt it was as common as the game makes it appear to be in the western states in 1899. 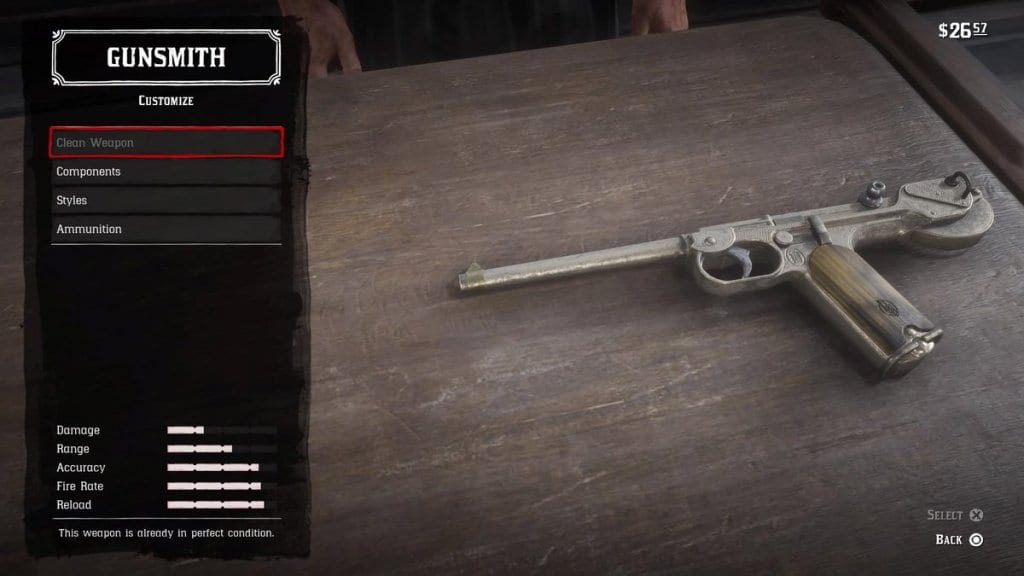 By 1899 the Volcanic Repeater would have already been a useless relic, but its an odd cool looking gun so I get why it’s in the game. This gun and the Volcanic rifle did go on to inspire the legendary Winchester rifles and set up Smith and Wesson to become a powerhouse of a company. In Red Dead Redemption 2 this gun holds 8 rounds, does decent damage and is fast to reload. 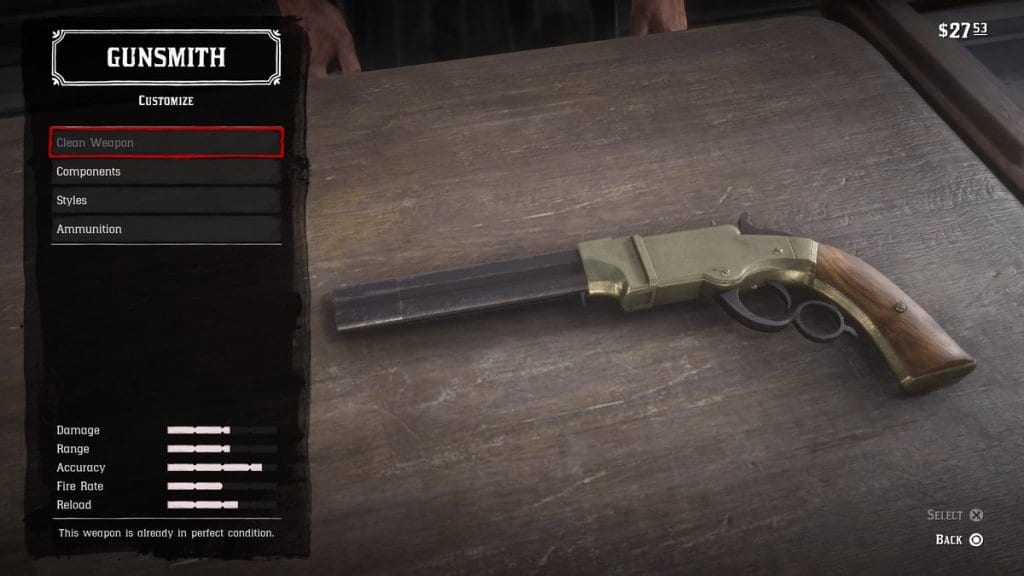 The Spencer 1860 Carbine is the first rifle you receive in-game and is called the Carbine Repeater. Early on in the game, this gun sold me that the game would be great. The Spencer Carbine is a lever gun, but the lever only functions to extract, eject, and load the next cartridge and the hammer has to be manually cocked, and the game got this right. The gun is also loaded through the stock and in-game is one of the fastest reloading rifles.

By 1899 the Winchester 1866 would have been replaced by any of the various Winchester lever guns, especially the perfection that is the 1894 lever action rifle. The gun was produced up until 1899 and was a bit cheaper than later models, so maybe this is the reason why. The cool Yellow Boy receiver gives it a visual flair though that is recognizable. It’s the second lever gun you receive and will likely be one of your most used weapons. 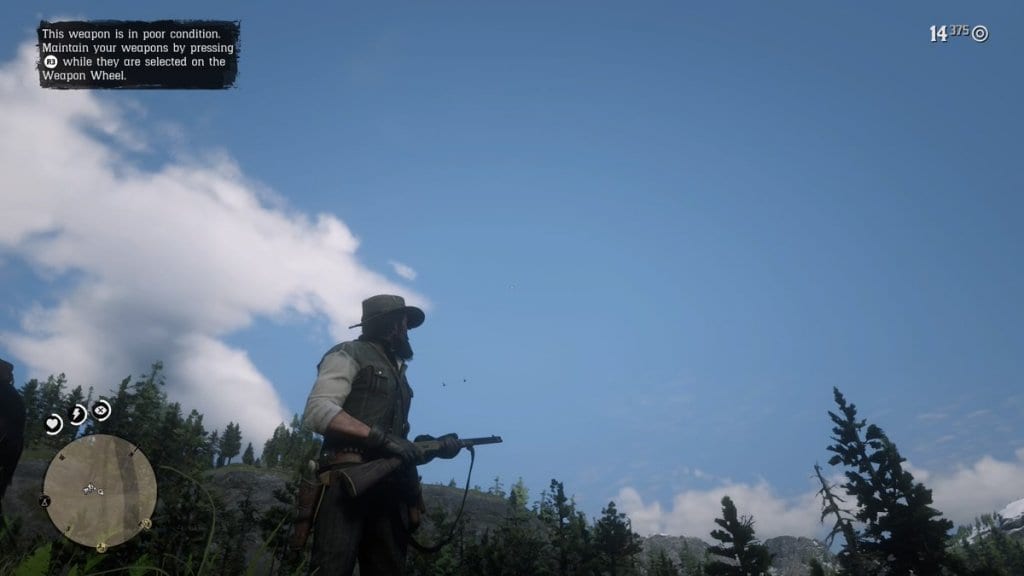 The Henry would be even rarer in 1899 than the 1866 Winchester. The Henry 1860 was produced until 1866 and was used in small numbers by the Union. The gun was revolutionary at the time and one Confederate officer once said, “It’s a rifle that you could load on Sunday and shoot all week long.” The Henry 1860 is the final lever action gun you unlock and allows you to add a short scope. 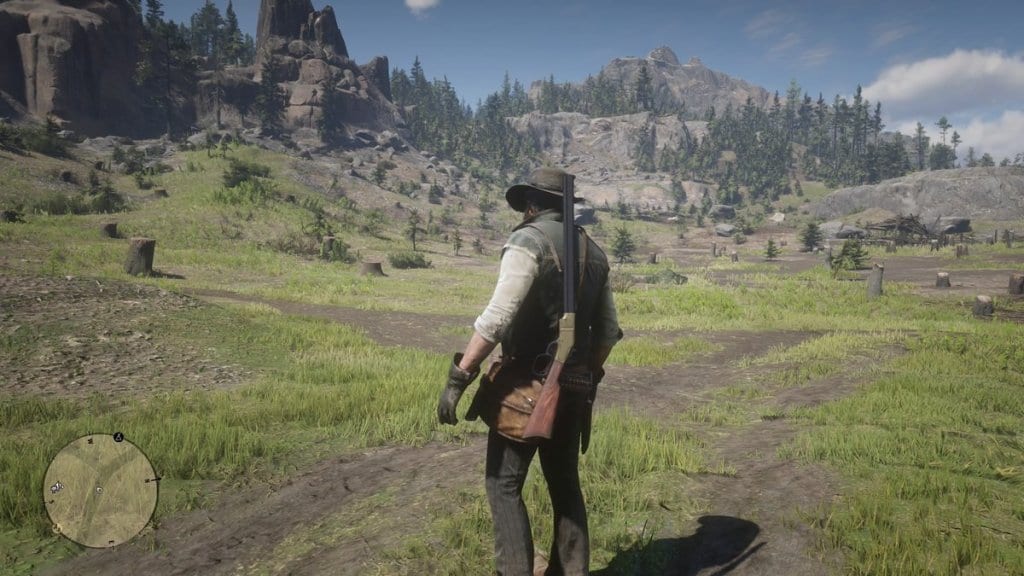 The Remington Rolling Block is a breech-loading rifle that was incredibly robust and strong. It was produced from 1867 to 1918 and was likely produced for so long due to the fact it could withstand the pressure from smokeless powders that were coming to be at this time. The rifle as the first de facto sniper rifle and it comes with a scope.

The Springfield Trapdoor 1873 was the first standard issue breach loader issued by the United States Army. By the events of 1899, the army would be using the Krag Jorgensen rifles. The 1873 was a very potent rifle that saw plenty of use outside the military with hunters due to its power, accuracy and affordable design. This gun is a great powerhouse for long-range shots and excellent for hunting.

The Winchester 1890 is called the varmint rifle, has its own ammo type, and in the game is designed for hunting animals like rabbits without destroying their pelts. Like the real 1890 its a pump action and by Varmint ammo they mean small rimfire rounds, likely 22 LR. It’s not a great fighting rifle, does poor damage, but is accurate, reloads fast and is a fun hunting gun. 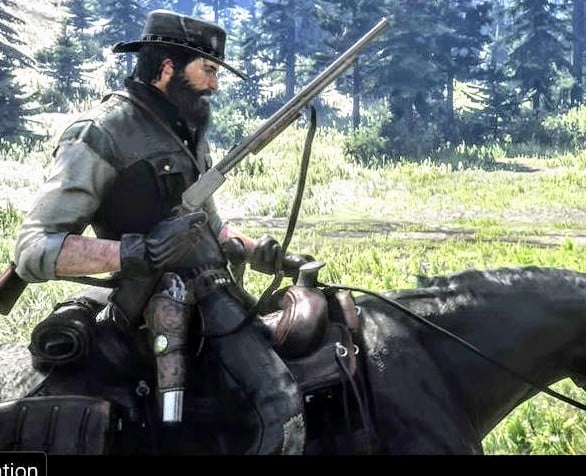 Our first of two guns that are anachronistic for the timeline. In 1899 the long rifle variant would be available, but this particular short carbine model came to be in 1938. In the game, it is your upgraded sniper rifle and you first the receive the gun on a rooftop to cover some friends in a firefight. This is the rifle used to assassinate President Kennedy. 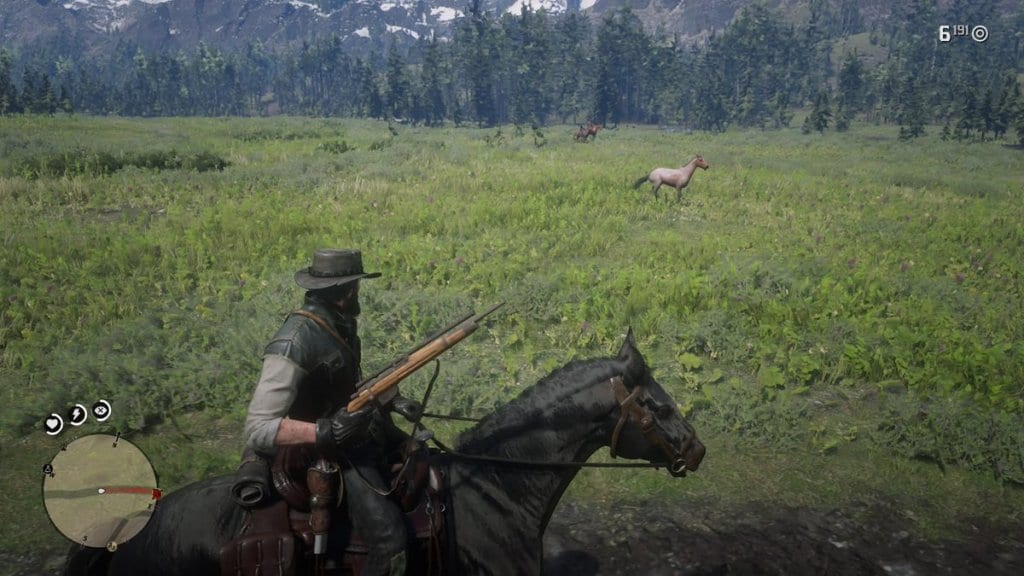 In 1899 this would be the gun in use by the US Army, however, in Red Dead Redemption 2 they use lever action rifles oddly enough. A fellow outlaw and former soldier oddly enough wields a Krag Jorgenson rifle throughout the game. This bolt action rifle is powerful but slow to fire compared to a lever action. It’s as powerful as a Springfield rifle, but faster to cycle through 5 rounds. 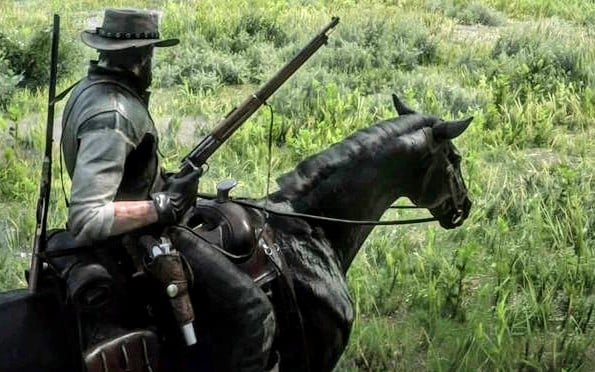 The first shotgun you receive is a simple double barrel sawn off. It’s impossible to determine what company or design it is as side by sides were incredibly common and built by tons of small manufacturers. The closest model I could find that looks similar enough is the Remington 1899. This is a powerful, albeit short range tool. It uses a handgun slot and this does open up the ability to dual wield when you receive the second holster. When dual wielding they are fast firing with 4 rounds of power.

The sawn off with a stock, and a set of longer barrels. The double barrel is a potent shotgun for the beginning game and it has a decent range, but a very low capacity. Identical to the sawn-off in many ways. Likely a Remington 1899. 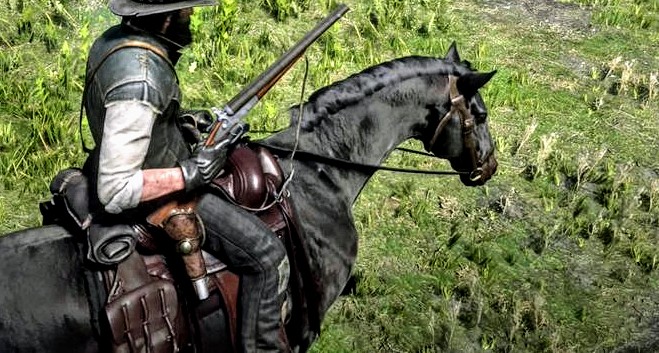 My all-time favorite shotgun is the pump shotgun, which is clearly a Winchester 1897 slide action shotgun. This was the first successful pump action shotgun based on the earlier 1893 design. At the time of the game, this would be the latest and greatest in shotgun technology. Red Dead Redemption 2 really missed out on making this gun capable of slam firing. You can fan your Cattleman, imagine doing basically the same with a shotgun. 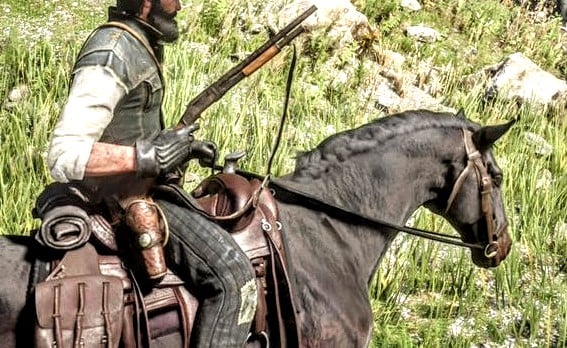 Winchester had a reputation for lever action guns and wanted a lever action shotgun. John Browning wanted a slide action, but Winchester was paying the bills so he designed a lever gun. In real life the Winchester 1887 was a step forward for shotguns, but it was heavy, bulky, and a bit ungainly. In Red Dead Redemption 2 it’s the most powerful shotgun and holds the most rounds, it makes you a real Terminator if you get my drift. 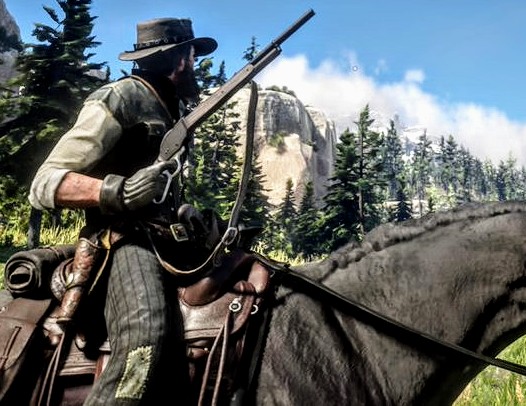 Known as the Semi-auto shotgun the Browning Auto 5 wasn’t in production until 1902. It offers the fastest firing rate of the shotguns, and when loaded with slugs its basically a semi-auto rifle. It’s really easy to go through some shotgun rounds with this gun, and it’s devastating in a  firefight. Even if it doesn’t make sense it’s a neat addition to Red Dead Redemption 2. 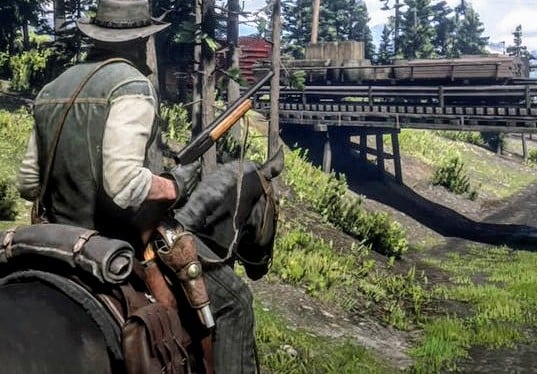 Red Dead Redemption 2 is a massive game with tons of things to do involving guns. From robbing banks to herding cattle and hunting your gun is used throughout the game. Little details like correct ammo in bandoliers is a nice touch, especially since the ammo starts to disappear as you start shooting. The wide variety of guns has good balance and if you like one gun over another you never really have to switch from your favorites. I used the Sawn offs well into the game, and never faced a penalty for preferring beginning guns versus later game guns.  As the game expands into multiplayer online modes we may see more and more guns arrive with DLC, but for now, we have our hands and saddlebags full.