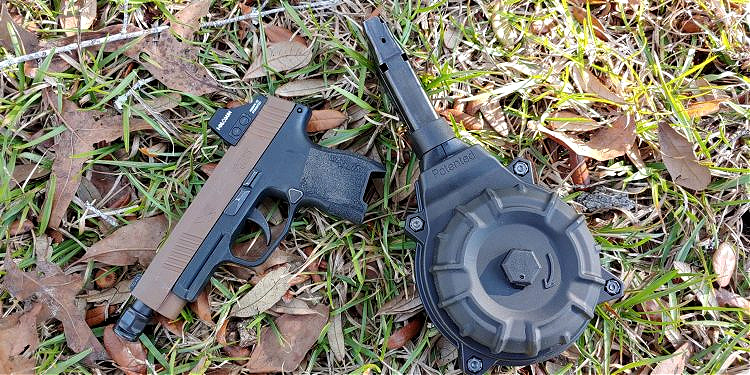 I love a lot of things in the gun world, especially silly stuff for guns and extended magazines, including drums. When you can combine those two things, you get stuff like the drum magazines for the SIG P365.

I know what you’re thinking; why the hell would I want a drum for a subcompact concealed carry pistol? Well, that’s a good question. A P365 Drum is easily the most outrageous thing you can add to such a pistol. 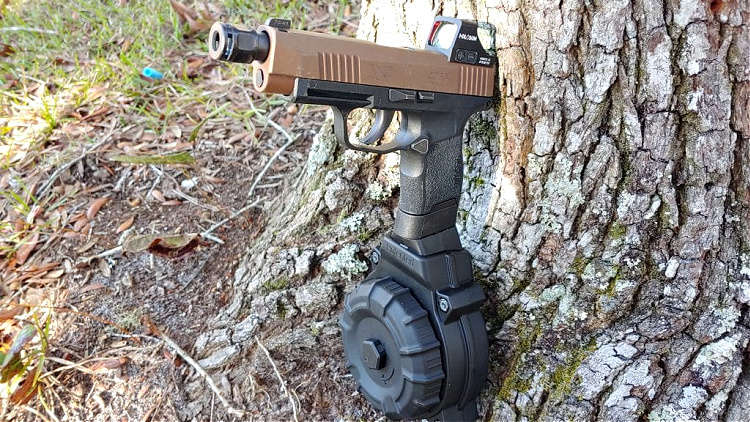 It’s almost like a Subcompact pistol monopod. How else would you provide covering fire with a concealed carry pistol?

We aren’t doing squad support with a Sig P365, and the average concealed carry engagement is not likely to drain the 10 to 15 round magazines the P365 uses. So what’s the purpose of the P365 drum? Well, Uhm, I can’t think of one, to be honest. That doesn’t mean I can’t love and appreciate a 50 round drum shoved into my compact pistol.

Breaking The P365 Drum Down

Who makes such a monstrosity? Well, ProMag, actually. They make more than one P365 drum what you see here what I’ve dubbed drum XL. It holds 50 rounds of 9mm. ProMag also makes a smaller 30 round drum.

You may think 30 rounds sounds more reasonable, and those thoughts are driven by the fact we are talking drums.

A drum for a pistol is silly. A drum for a subcompact pistol is stupid. If you are willing to purchase stupid, then you might as well go the whole hog and get the 50 round drum and be a man about it. 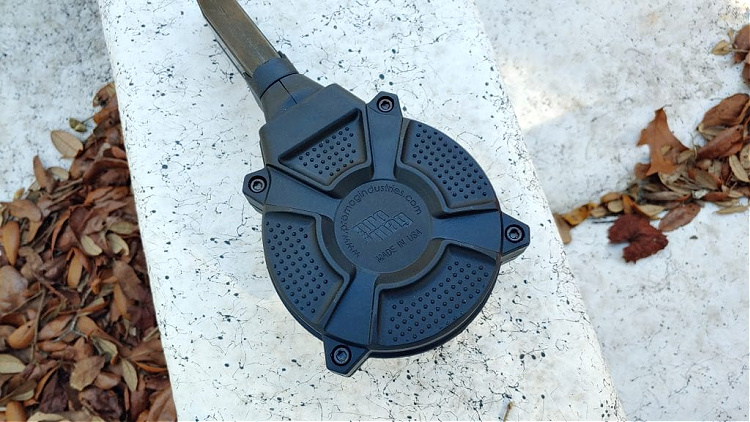 ProMag, yep ProMag, makes the drum and its surprisingly robust.

At the base of the magazine is a finger extension/grip filler. It’s removable if you want to use the drum in a P365 XL instead of a P365. With a Sig P365, it’s wise to keep the extension in place, so the drum doesn’t swing back and forth and hamper reliability.

Loading this mother trucker isn’t super hard. ProMag produced a Glock drum years ago, and they somewhat mastered the easy-load design. To load the drum, you need to push the lever upwards, and this will drag the follower downward.

You then drop in a few rounds and release the lever. Repeat the process, and the lever continually ratchets the rounds and follower downwards. 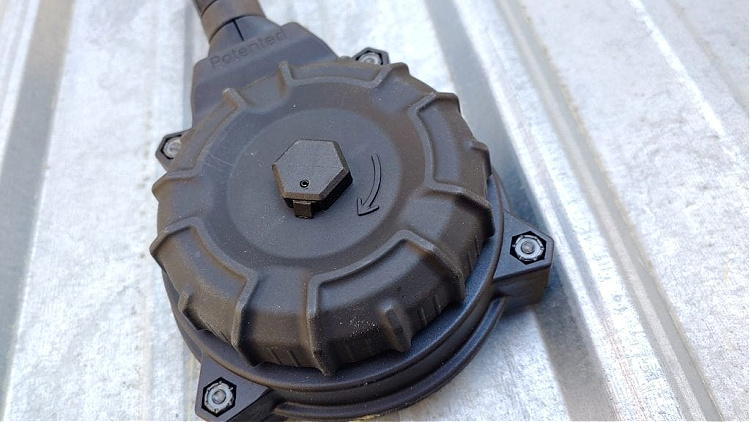 This device allows retraction of the follower to load the ammunition.

Loading it is simple in terms of how it works. Like most things, the practical aspect of loading the P365 drum is harder than the theoretical explanation. Holding the drum while trying to press the lever up and load rounds makes me wish I had a third hand. The ratcheting action makes it easy for rounds to be dropped in without needing to workout your thumbs.

Can I leave the Sig P365 Drum Loaded?

Drum magazines are notoriously tricky. Most older designs could not be left loaded or tensioned. AK drums fabulously need to be wound up to work and then untensioned for storage purposes. Modern drums from Magpul can be left loaded without issue.

With all this in mind, I wish I had an answer for you. I’ve left the drum loaded for 30 days before writing this review, and it functioned without issue with all 50 rounds. Those were brass cased Winchester White Box 115 grain loads. 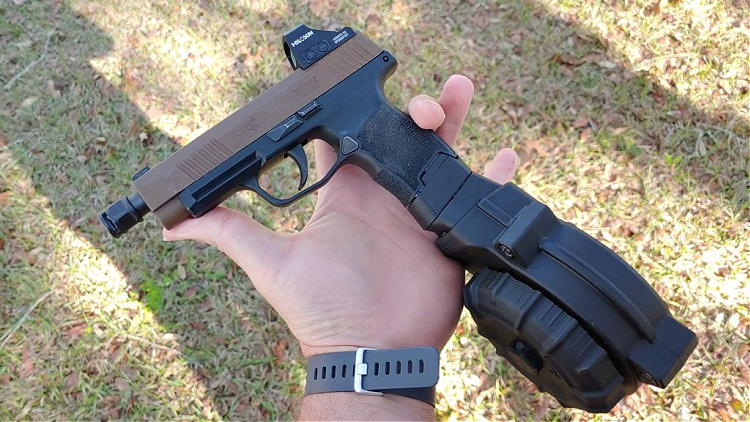 Look upon this wonder and appreciate its silliness.

However, I can’t seem to find an answer. ProMag mentions nothing about leaving it loaded on their website, and online seems to be a wasteland of non-answers. You might get away with it, but ProMag is also a budget magazine company.

I wouldn’t leave the drum loaded if I wasn’t reviewing the item for you. I also don’t see a reason why I’d leave a drum loaded. Leaving a Magpul D-60 makes sense for an AR15, but I can’t see a situation outside of the zombie apocalypse where I’d need a drum for a Sig P365.

The million-dollar question is, does the P365 drum work? By work, I mean, is it frustration-free, does it jam, misfeed, and fail? One of the most prevalent reasons that a firearm can fail is due to the magazine.

To test the P365 drum, I gathered three boxes of various ammo. The first is the aforementioned Winchester White Box I locked into the magazine for thirty days. The next is Barnauls steel cased, and finally, Winchester Forged steel case ammo.

These three types of ammo represent different quality points that shooters will likely encounter. The drums were fired fully loaded, and I noticed a few things when the drum was both empty and loaded. 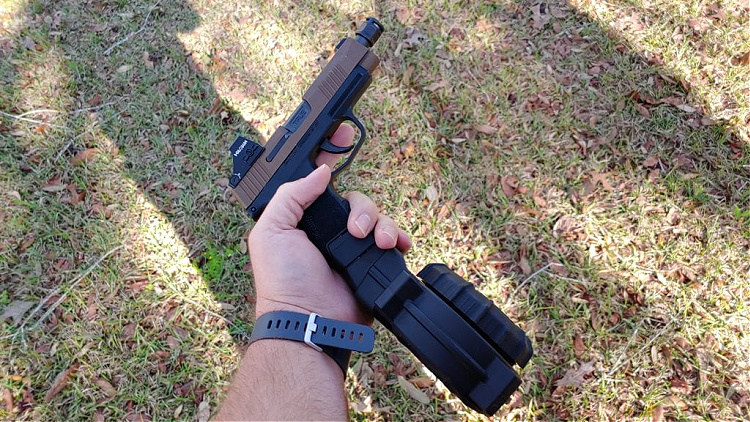 Good luck tucking this beneath a shirt for concealed carry.

First, the drum will not fully seat when fully loaded with the slide forward. It’s too much pressure, and you can either load with the slide locked to the rear or drop a few rounds from the drum. Second, when empty, the slide cannot lock to the rear.

On the reliability front, I fired at various rates of fire for various drills. Not wanting to waste ammunition, I used the P365 drum as a monopod to zero my Holosun 507K at ten yards. This was a slow-fire event and was a good start overall. After that, I did some double taps, cadence drills, and more. 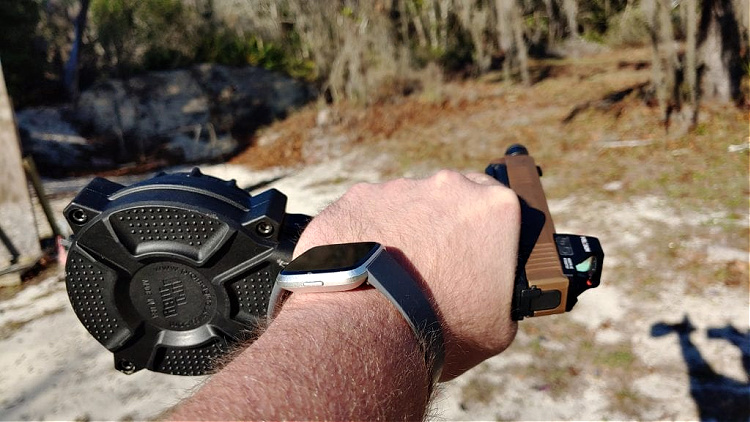 Extendo means I gotta run a gangster grip at least once.

I did this for all three ammo types, minus the optic zeroing. With the WWB and Barnauls, I had zero issues with the drum. All 50 rounds fed flawlessly and zoomed from gun to target with grace and humility.

With the Winchester Forged, I got two malfunctions where the round failed to rise far enough to feed. My corrective action was spinning the ratcheting crank and letting it go. It seemed to give the rounds the boost needed to feed correctly.

Winchester Forged is, without a doubt, the crappiest ammo I’ve ever fired. It’s super dry, dirty, and I like to keep it around for testing purposes. It’s worse than Tula in quality and will make the best guns tap out. It did what I expected from a drum built by Promag.

The loaded drum’s weight seemingly exceeds the weight of the gun itself—that extra weight and where it’s placed results in an interesting feel when the weapon is fired. The muzzle climb feels more exaggerated, and I think it’s because the drum creates additional momentum as the gun recoils.

Shooting the P365 drum side by side with a standard magazine shows a clear difference in how the weapon handles. It’s odd, but I experienced a similar feeling with the KCI Glock drum, so I figured it out pretty fast. 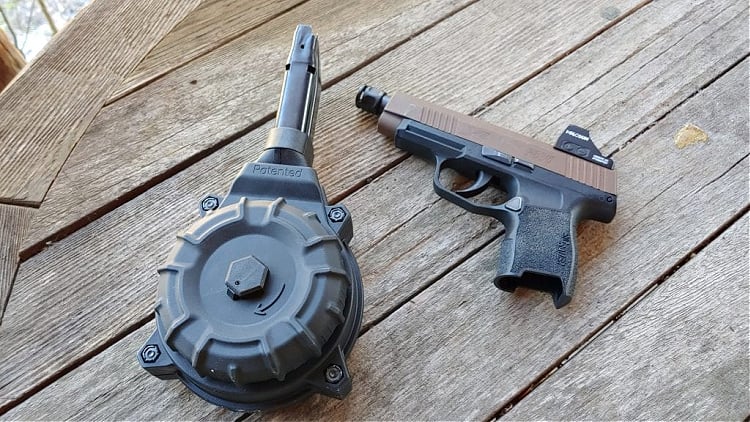 ProMag makes both a 50 round drum and a 30 round drum, just in case you can’t decide.

Other than that, the experience is like any other, except now your pocket pistol weighs as much as a Desert Eagle. I think we need more drums for pocket pistols. Like, can we get a 380 ACP drum for my LCP? What about a Beretta Bobcat drum? Why are we not investing in these technologies, people? 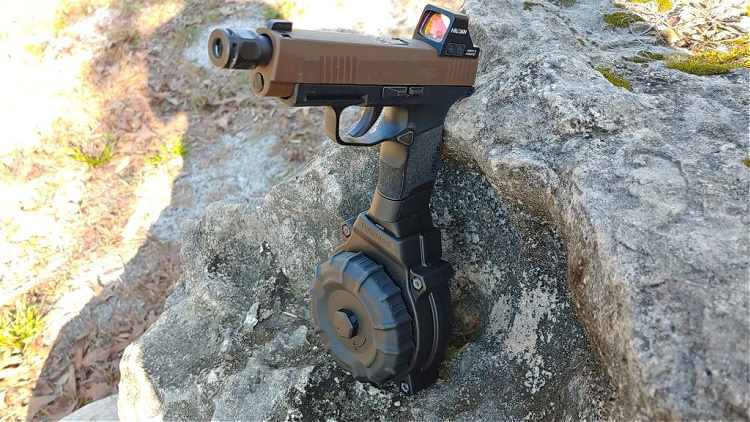 The loaded drum weighs more than the gun itself.

Is there a reason I’d suggest you obtain a P365 Drum? Well, there is certainly not practical reason. If you need to lay down suppressive fire with a pocket pistol, you might’ve brought the wrong gun or went to the wrong gunfight.

However, from a fun perspective, I say go for it. It’s silly, unnecessary, but I can’t help but grin when I load the drum into the Sig P365. It’s kinda like an ugly child, but I can laugh at it to its face.