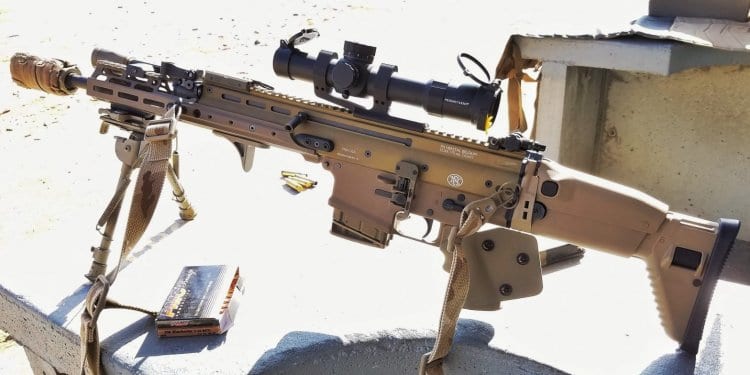 I’ve been looking to put an LPVO (Low Powered Variable Optic) on my SCAR 17s for some time now, but that hasn’t been easy as one might think.  The first LPVO I mounted was a disappointment and couldn’t even get zeroed because it broke in less than forty rounds of 7.62×51 ammunition. The SCAR 17s is notorious for breaking optics due to the way it manages recoil. It is known for being a very low recoiling platform for the 7.62 NATO cartridge…for the shooter that is, but the recoil has to go somewhere and that results in a lot of broken glass.

My long-range shooting experience is very minimal, though it’s a skill that I plan on improving upon. The majority of my training and experience with rifles have been focused on close quarters to short range, not exceeding 200 yards. Dan Brokos of Lead Faucet Tactical taught some (basic) scopes carbine skills out to 300 meters at RECOIL Magazine’s Summit in the Sand in late 2017. It was a lot of fun and I wanted to continue on with shooting at greater distances. I know there are a lot of people out there who are at thinking about getting into it as well. If you’re one of those, know this – the most important part of your setup is almost certainly the optic atop the rifle. Arguably even more so than the rifle itself, though that’s obviously a very significant part of a “scope rifle” ensemble!

Primary Arms is well-known for their “glass” (scopes), with a reputation quality budget optics that are great for plinking, competition or hunting. They’re also the manufacturers of the ACSS system, a reticle I have been wanting to try.

I originally purchased a SCAR 17s for close and medium range engagements from point blank (if necessary) to around 700 yards, and I’ve set it up to be adaptable for target bench or prone shooting to dynamic shooting. The Primary Arms Platinum 1-8×24 seemed like an excellent choice for an LPVO. 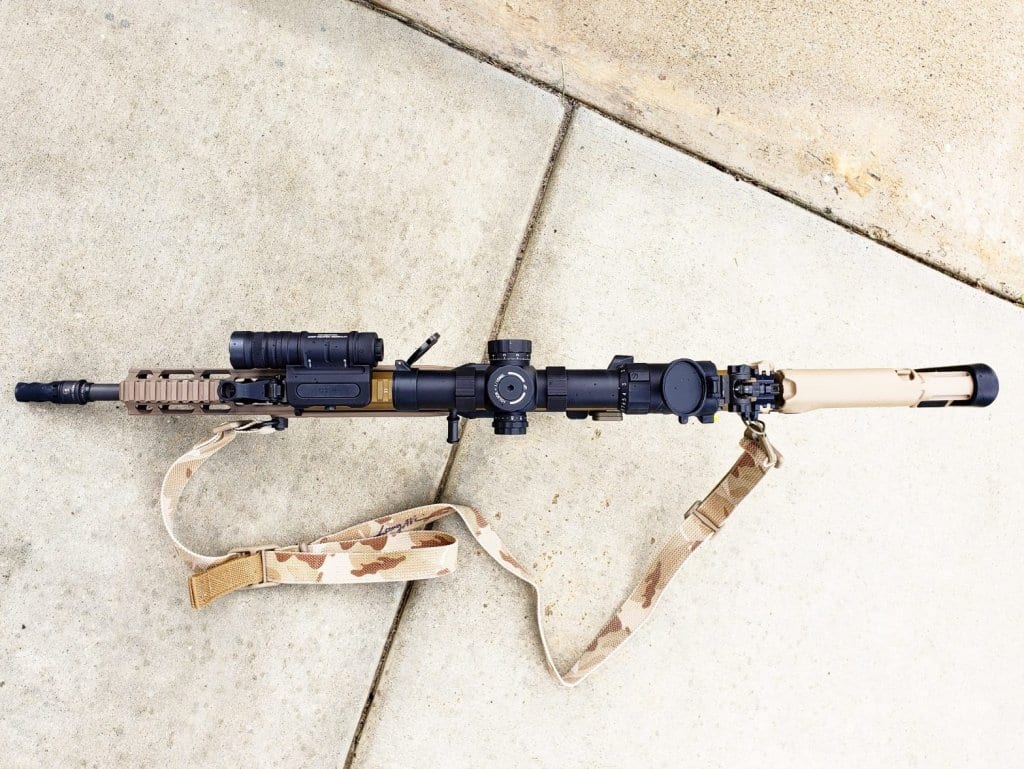 Primary Arms sent me the Platinum optic with the proven ACSS reticle that is calculated for the 5.56×45 and 7.62×51 cartridge. It came in some nice packaging along with an Aero Precision lightweight scope mount. Out of the box, the high-quality workmanship can be seen throughout the exterior, when looking through the clear glass. It looks beefy with it’s 34mm tube and when you pick it up, it feels solid and built like a tank. Weighing in just under 27 ounces, it isn’t the lightest LPVO, but it isn’t too heavy either, given that it magnifies to 8x. Yes, it is much heavier than an RDS but it allows you to see your targets at a further distance and get you PID in cases where you need to do a threat assessment.

One of my favorite features is that this is a First Focal Plane (FFP) scope, meaning that the reticle is etched on the front lense. I prefer FFP over Second because the reticle is true throughout every level of magnification and at 1x, the reticle is a smaller dot that acts like a red dot sight. The elevation and windage turrets are oversized with the ability to lock in place or out of, easily without tools. You do so by pulling up on the outer top half of the turret to make your adjustments and push it back down to lock it in place. Once you’re zeroed, used the hex wrench provided to reset the markings on the turret back to zero. 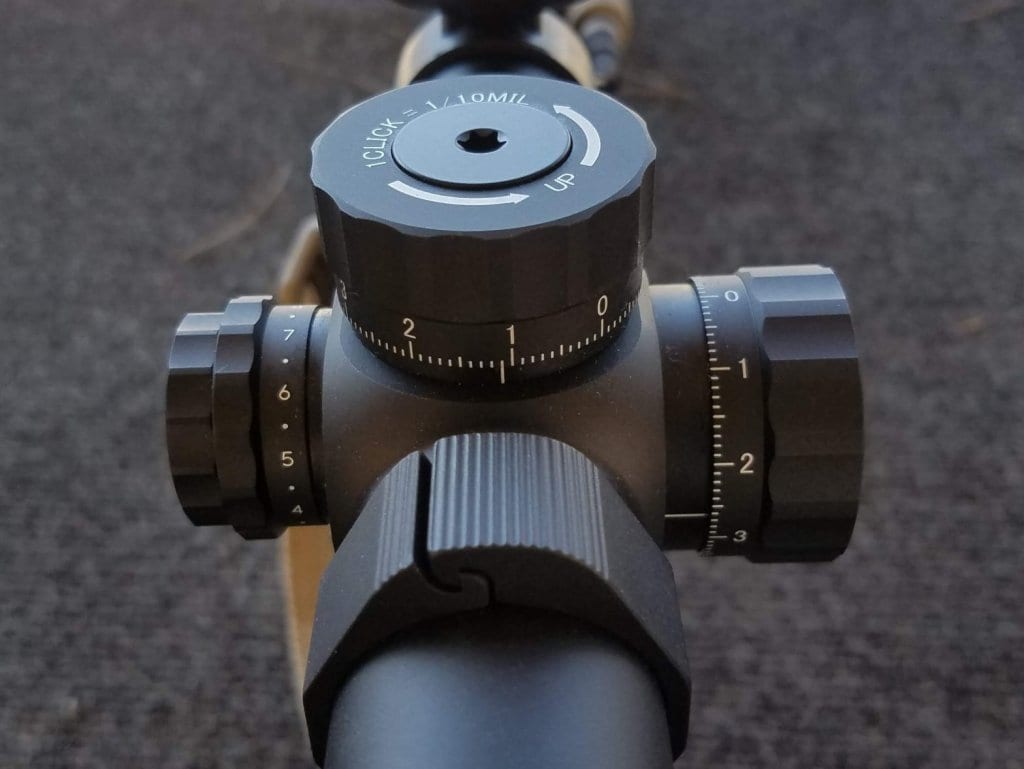 Zeroed in. (I then removed the caps and reset it so the 0 is centered.) 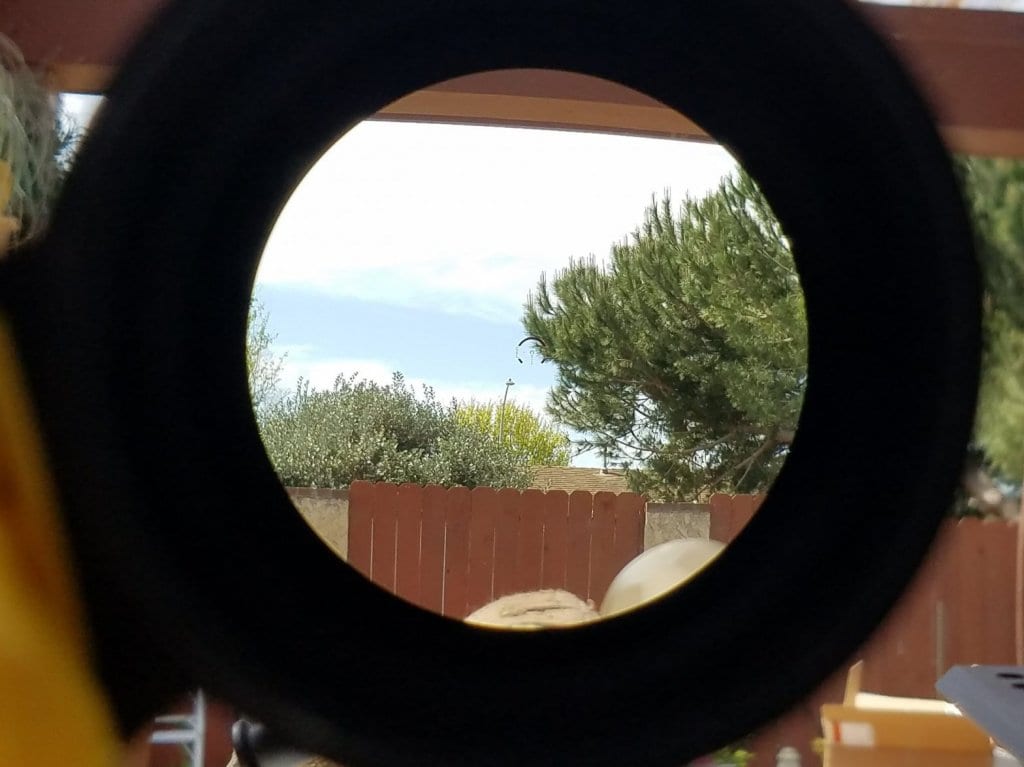 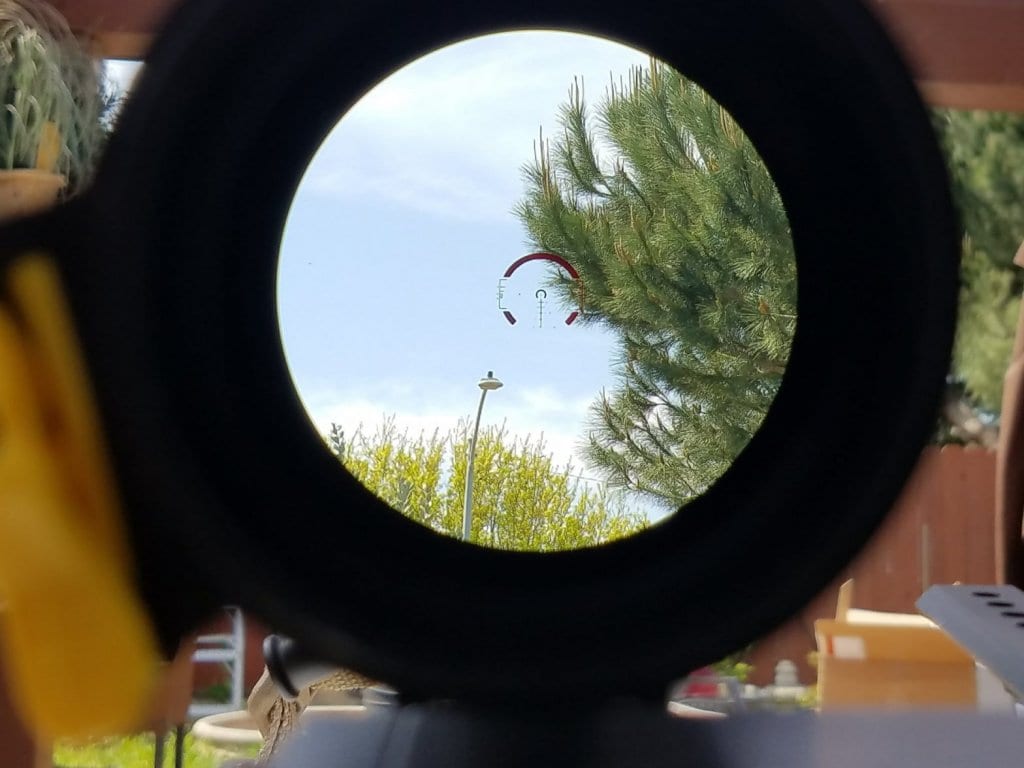 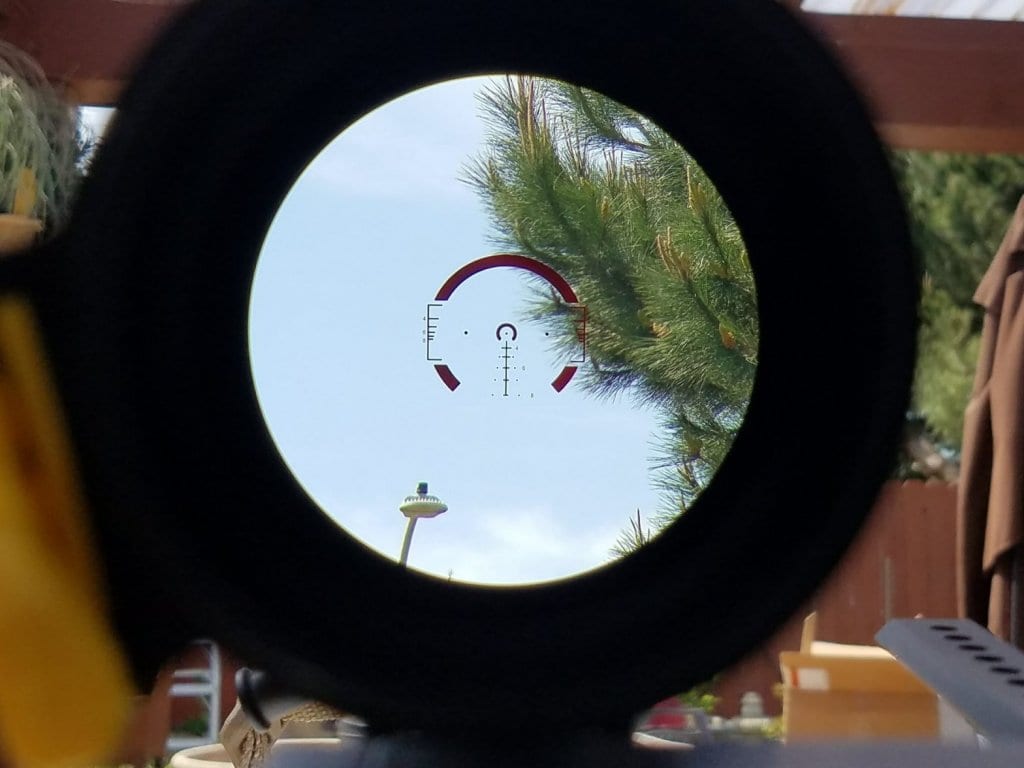 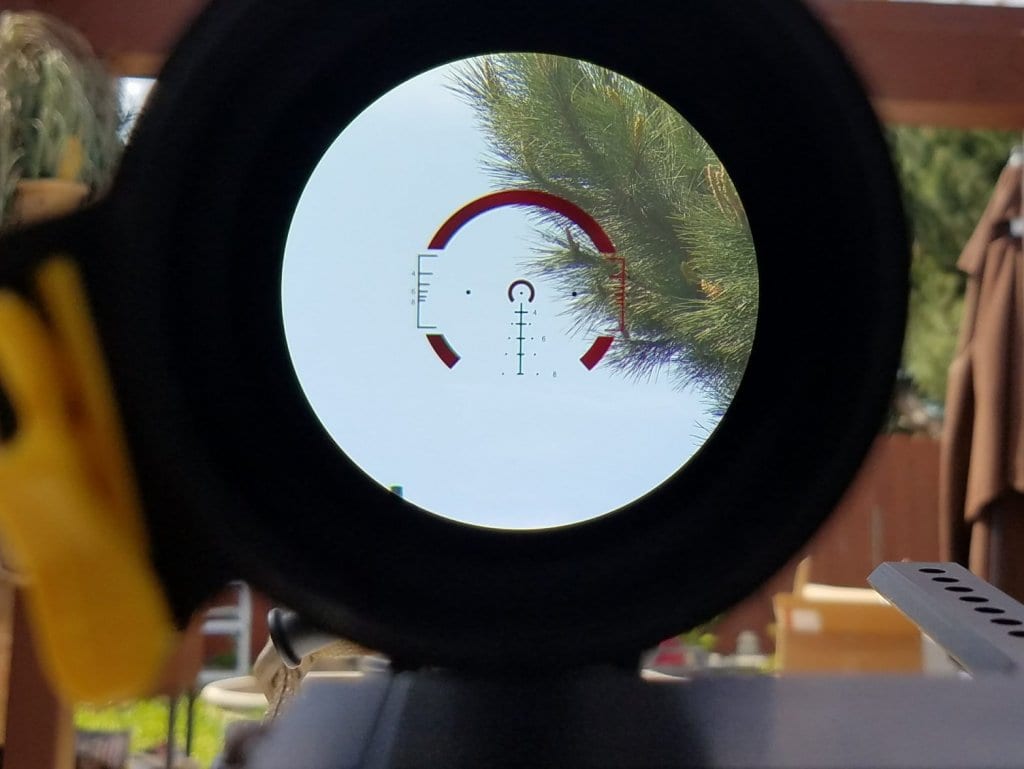 ACSS stands for Advanced Combined Sighting System, it is a reticle system designed by Dimitri Mikroulis of Primary Arms. I have chatted with Dimitri online, he is extremely knowledgeable with long range shooting and was always helpful with sharing his expertise to answer questions that I had. The ACSS reticle makes your life easier when shooting at distance. It does so by taking the math out of the equation for the shooter, which I’m a fan of because I suck at math. It has smartly built in auto ranging, a bullet drop compensator, wind holds and target leading. A lot of those features aren’t necessary for everyone, but it is nice to have for those that need them. If you’re dealing with two-legged threats, you’ll need to know how far they are from you and come up with a firing solution before they beat you to it.

With ACSS, specifically on the Platinum 1-8x, there are two methods to gauge distance; placing the horizontal BDC lines to match up with the shoulders of the target or use the height brackets on the sides. The shoulder measurement is for the average male at 18 inches and the height is based on a 5’10” male. Every ACSS reticle is designed specifically for each scope. The guys at Primary Arms then go out and test them with various ammunition loads to confirm each BDC. They’re doing all the math for you, which saves you time and ammo. 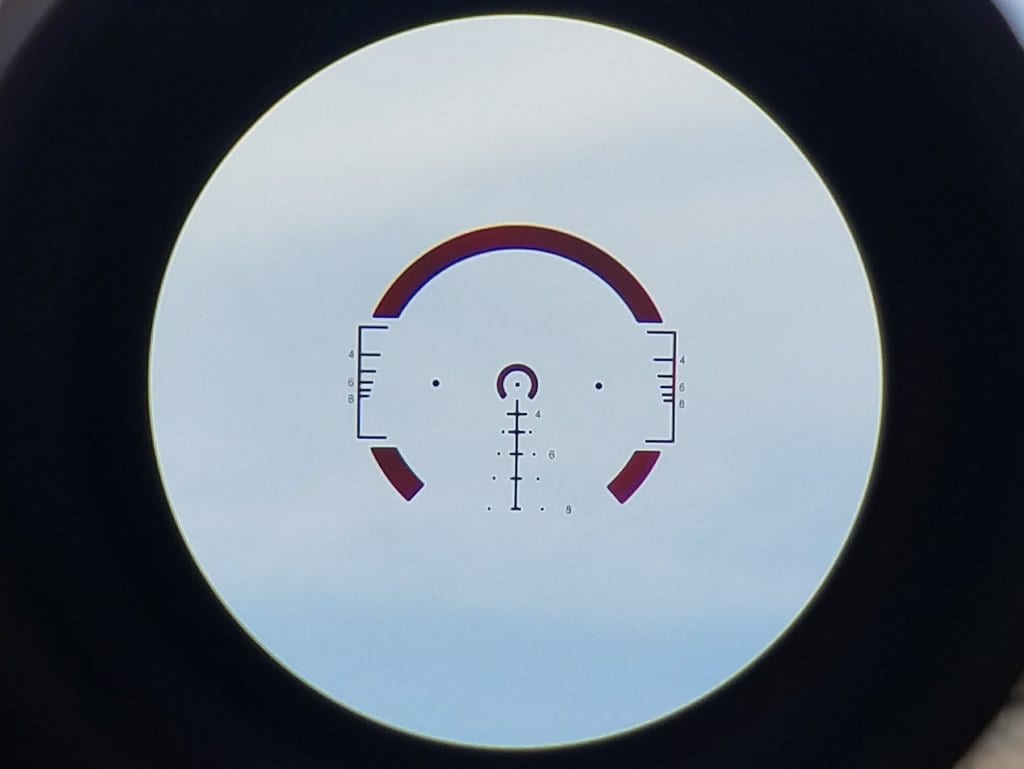 The ACSS at 8X through the Platinum 1-8x.

A lot of my friends who shoot long range told me to go shoot steel at known distances to learn the hang of things. That’s exactly what I did. I went to the Angeles Shooting Range in the greater LA area, which is the perfect place to learn and have fun. I usually dread public ranges out of the fear of getting shot by some idiot who can’t follow the four simple rules of gun safety but this range has plenty of safety officers on hand to get on those who go near the shooting benches during line breaks. The rifle range at Angeles lets you put out paper targets at 50, 100 and 200 yards and has steel targets placed at 200 to 600 yards in 100-yard increments. 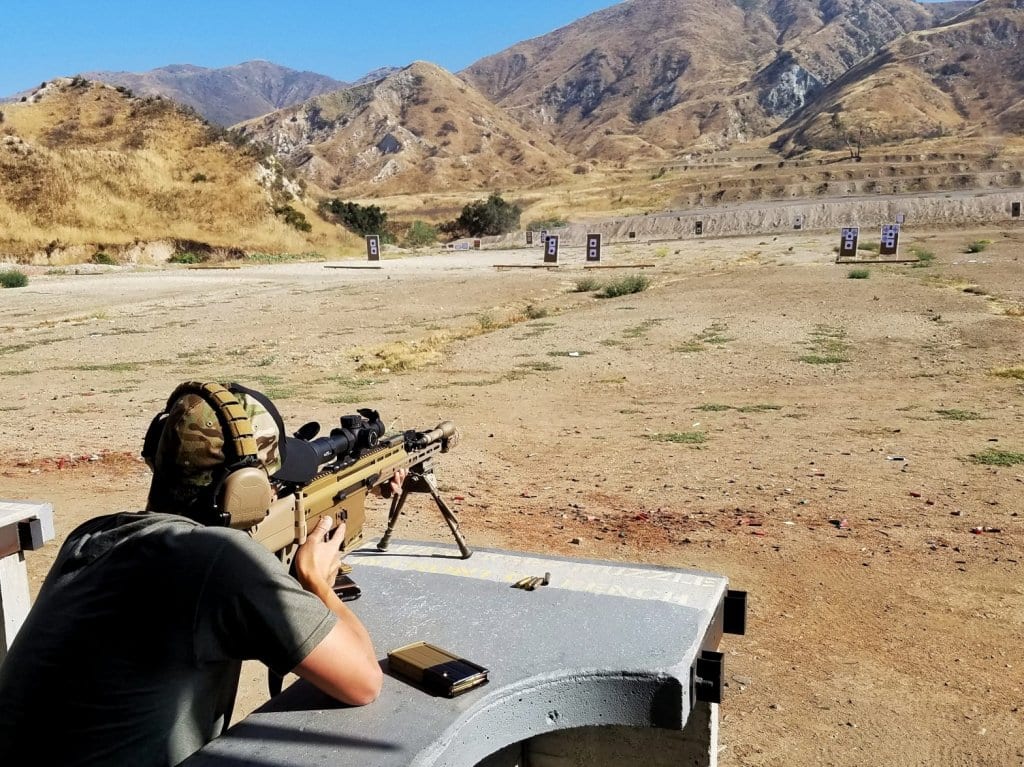 The nice thing about Primary Arms is their customer service. If you send a direct message to the @primaryarms account on Instagram, Dmitri is usually always reachable to answer whatever questions you may have. He gave me some tips on zeroing the Platinum 1-8x; zero it 1″ high at 100 yards and confirm the BDC at 300 and 400 yards. I did just that in a quick zero, my point of aim and impact was 1″ high at 12 o’clock. Using the BDC, I was ringing steel with ease out to 500 yards, rarely missing my target. The times I did miss, it was my fault or I didn’t account for some minor wind changes. The glass was clear and it was easy to see the targets, it’s not the best glass I’ve looked through, but it’s very decent and usable. 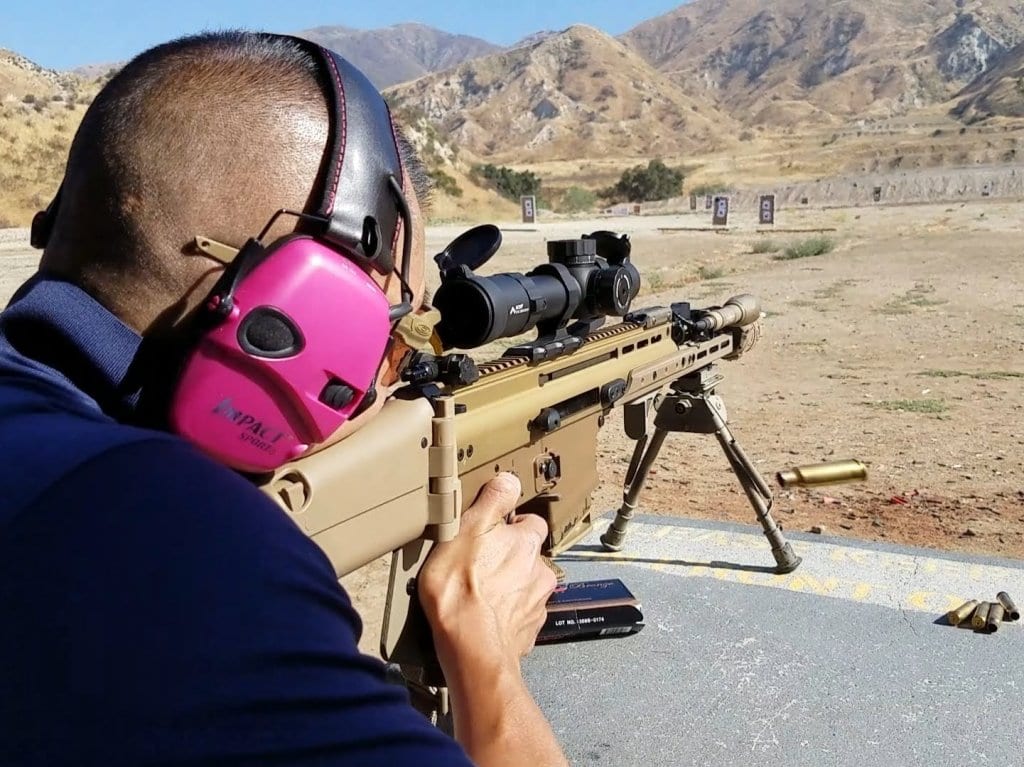 Having a friend at the range is a win-win! They can call your shots with a spotting scope and makes is easier to zero and confirm hits.

I did not utilize the ACSS reticle to its full potential since everything at this range was at known distances and it was mostly clear of any wind.

It survived a few hundred rounds on the SCAR 17s that day and proved very effective at distance. Next up was to see how does at 1x magnification and close range work. 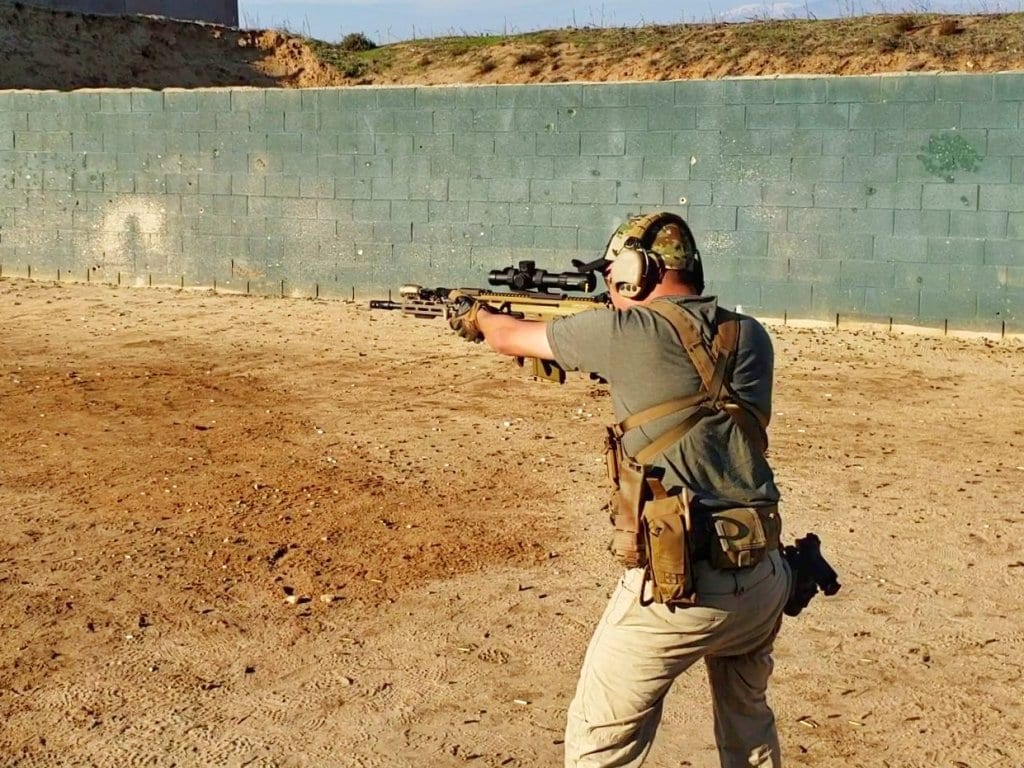 Closing in with the SCAR 17s.

The SCAR 17s is not the ideal CQB weapon system in any regard, especially with a full-length barrel. It is quite hefty and bulky, not to mention that the 7.62 NATO round is overkill at these distances. However, it can be done if need be. I ran several moving drills at 25 yards and closer at paper targets with the Platinum 1-8x dialed all the way down to 1x. It was nice and bright out with some shadows coming off the side of the range wall, I had the illumination dialed all the way to the highest setting. It isn’t Aimpoint bright but I didn’t have issues finding the horseshoe reticle which resembles a dot at 1x. LPVOs are not parallax free like 1x red dots, as you’re looking through a tube. Your head placement needs to be in the right spot to have a good FOV through the scope. It takes some practice and training to perfect. The focus ring at the rear of the scope helps you get a clear image that is unique to each shooter. 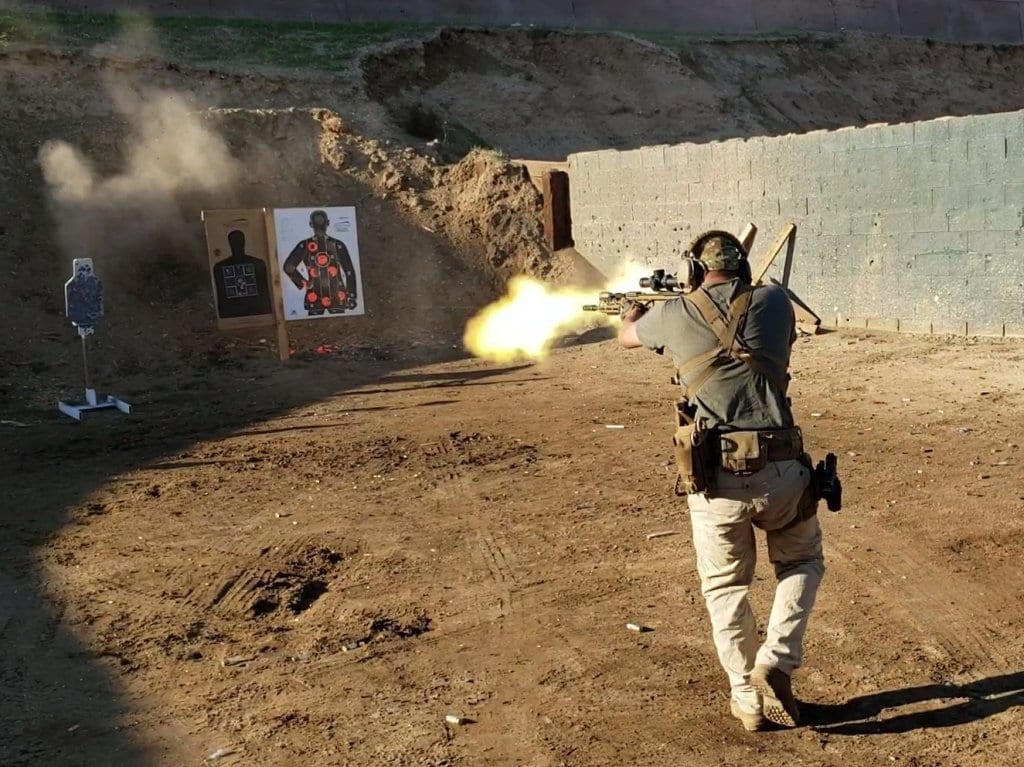 I was able to run the Platinum 1-8x at medium and close range effectively. The ACSS reticle takes care of a lot of the math and makes it easy to get hits. For what I am using it for it fits all of my requirements. The center dot at 8x can cover smaller targets at a distance which could be a problem for someone who wants more precision. There is a newer version with the Raptor ACSS reticle which replaces the dot with a chevron point.

At the time of writing this, there have been many additional models with newer reticle options in which I will include links to at the end of this report. My reticle is considered the traditional ACSS, with BDC out to 800 yards with wind holds. It is still available in a Silver finish. The Raptor and Griffin reticles are more precise with the Griffin having BDC holds out to 1,000 yards. 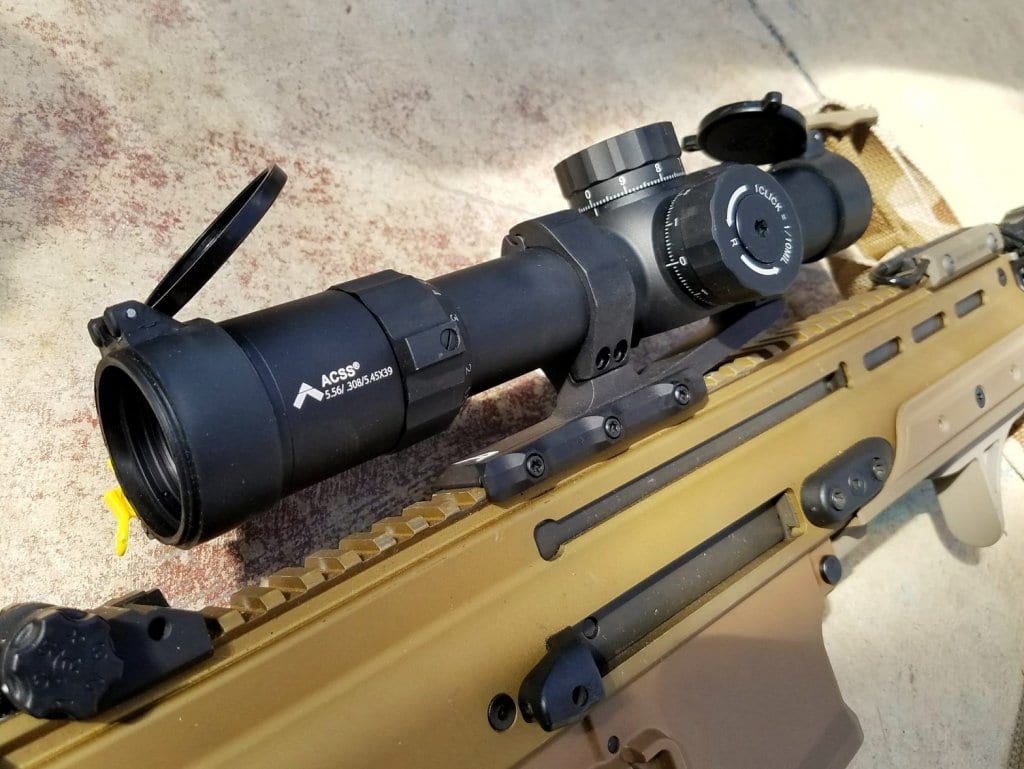 Bottom line, the Platinum 1-8x fills the void between a budget optic and the higher end optics out there. The Japanese glass is very clear and crisp, however, when you look through a comparable Leupold scope, it doesn’t come close. The Leupold is much clearer and brighter, but it is at a price point that is three times the MSRP of the Platinum 1-8x; out of the range for most shooters who aren’t using it for professional applications. At $1,299.99, the Platinum 1-8x is a great option to look at, it is durable and full of features, especially with the ACSS reticle and Lifetime warranty through Primary Arms. It is truly hard to beat with all of that being said.

Note: the behind the scope photos were made possible with the Nexus U Mount. It’s a solid piece of kit that will make it easier to get images or video on your rifle. 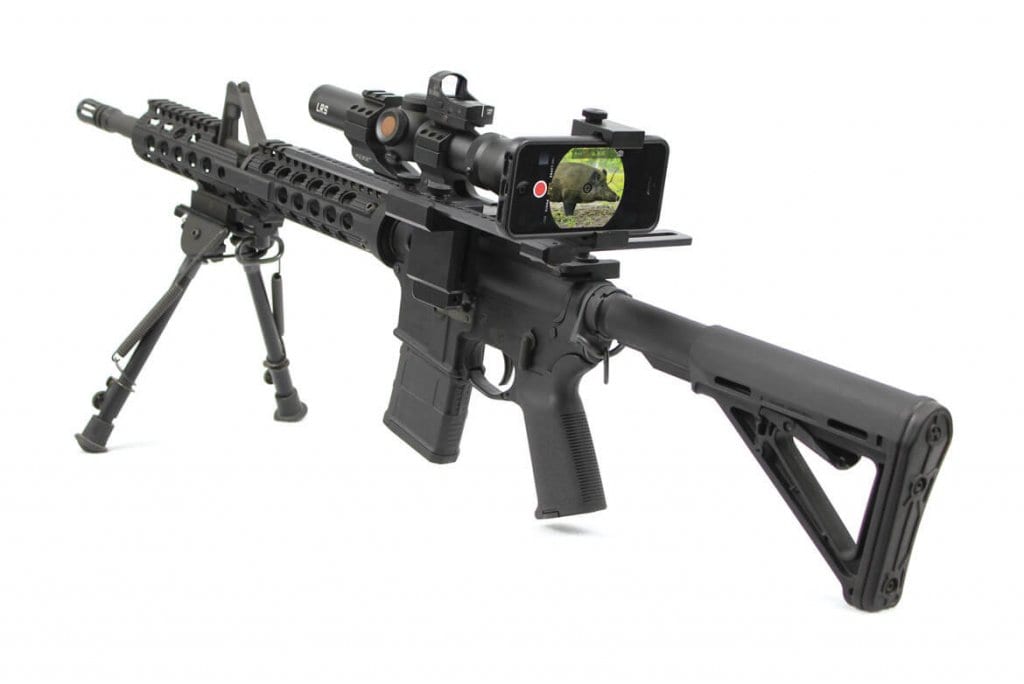 Fifty Shades of FDE is a full-time LEO in California with about a decade’s service in a very large metropolitan agency. He’s a husband, father, and firearms enthusiast. He is a supporter of the Second Amendment and a proponent of law-abiding citizens’ right to defend themselves with concealed carry permits. He runs his @fiftyshadesofFDE page on Instagram and writes gun/gear reviews on www.fiftyshadesoffde.com – when he’s not writing for The Mag Life, of course.