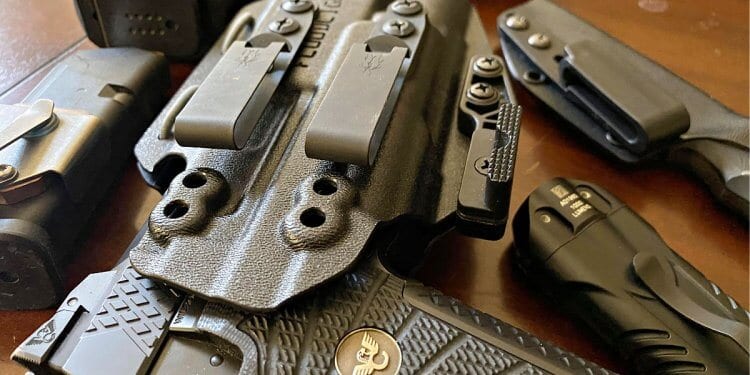 Locating a true “universal holster” for a handgun has always been difficult, and getting hold of a quality universal holster next to impossible. Happily, finding a decent multi-pistol holster is much easier now than it was. Recent advances in holster design have mitigated this somewhat, as has the development of smaller, more robust weapon-mounted lights (WMLs). These new designs are typically one of two styles: they’re either predicated on a looser tolerance that accepts a variety of holster frames, or they’re based on seating the geometry of a specific weapon light. The PHLster Floodlight is one of the latter options and is, in my opinion and experience as of this writing, the best of them.

WMLs have come a long way in the last decade.

The ability to affix a high output, compact-sized light has become commonplace not just for duty but also for concealed carry as well. Gone are the days of the D cell Maglight and end-users can have 1000 lumens at their fingertips in a lightweight and robust package that can be attached to most modern pistols. This variety leaves holster manufacturers forced to keep up with not just new firearms being released, but also the various combinations of all those weapon styles paired with each of the various lights.

PHLster saw this as an opportunity to try something new. Choosing the two most popular weapon-mounted lights, they chose to design a holster that was based around retention of the light body instead of the weapon itself. This allows for a holster that can be used with most popular handguns as long as it is attached to either an X300 or a Streamlight TRL-1 and thus the floodlight holster was born. 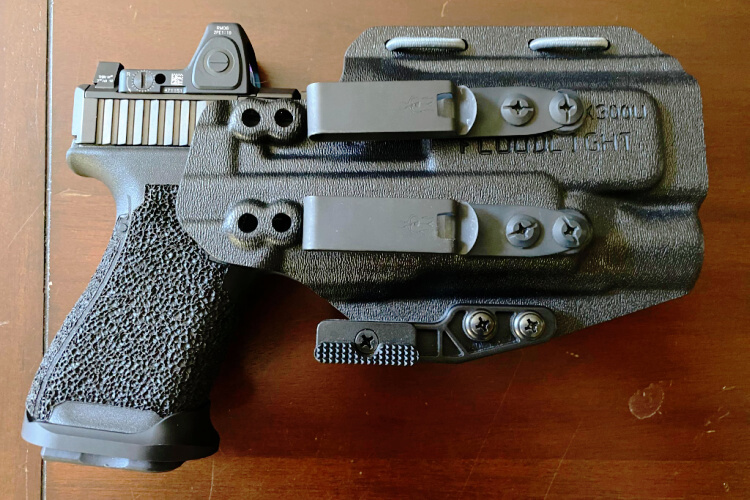 As an instructor and writer, I try my best to sample as much as I humanly can within the constraints of my limited budget and product availability. I have tried a variety of weapons light from various manufacturers and in the end, the one that has proven itself time and time again both in my past operational life and current civilian life is the venerable x300 from Surefire.

With said, I have a number of pistols from different manufacturers that all are currently running an x300. One particular model was problematic: I had a difficult time finding a holster that would fit my CZ SP01 and Shadow 2 with Surefire affixed.

As I try to explain to most people in my classes, it’s not that you have a hard time concealing or carrying your chosen pistol because of the pistol, it’s (typically) that you haven’t found the right holster yet. Unfortunately, people get married to the first holster they purchase and if it does not work for them, they then won’t carry or use that pistol. I have certain guns that I have rotated through a half dozen different holsters before finding one I like for my chosen purpose.

Don’t let the holster be the reason you don’t carry.

I had seen the PHLster Floodlight holster at the Agency Arms party at SHOT a couple of years ago where PHLster had a table set up, but hadn’t taken the plunge in trying one out. I had my apprehension about a “universal fit” holster. Would it rattle and shake? Could I get actual retention of the pistol or would it be like dropping the pistol into a square cardboard box and hoping for the best? Some of the unique things about the Floodlight are that it is ambidextrous and fits pistols with slide mounted Red Dot Sights (RDS), compensators, muzzle devices, and suppressor height sights. They currently make them in both IWB and OWB configuration. 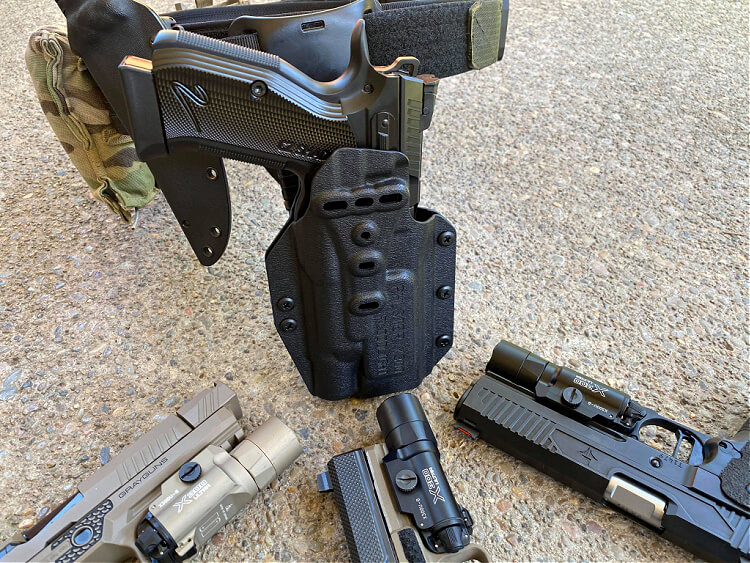 One holster many options… as long as it includes an x300.

The Floodlight confirmed fit list (that I’m aware of, as of this writing):

The first Floodlight I ordered was for Outside the Waist Band (OWB) so I could mount it to Safariland QLS fork and have a good “spare” holster if something went wrong with one of my others. I just figured I would fit it to my Shadow 2 and hope for the best.

For OWB, the holster shows up with multiple sets of various sized rubber washers for one side of the two-piece design to adjust the fit of the holster to your preferred pistol. The instructions are pretty idiot-proof, and it fits the gun surprisingly well. With having it fit to my Shadow 2, theSP01 fits a little loose but its good enough for range use. It wouldn’t take but a minute to bust out the other washers and swap them out to get a better fit but I’m just leaving it for now. 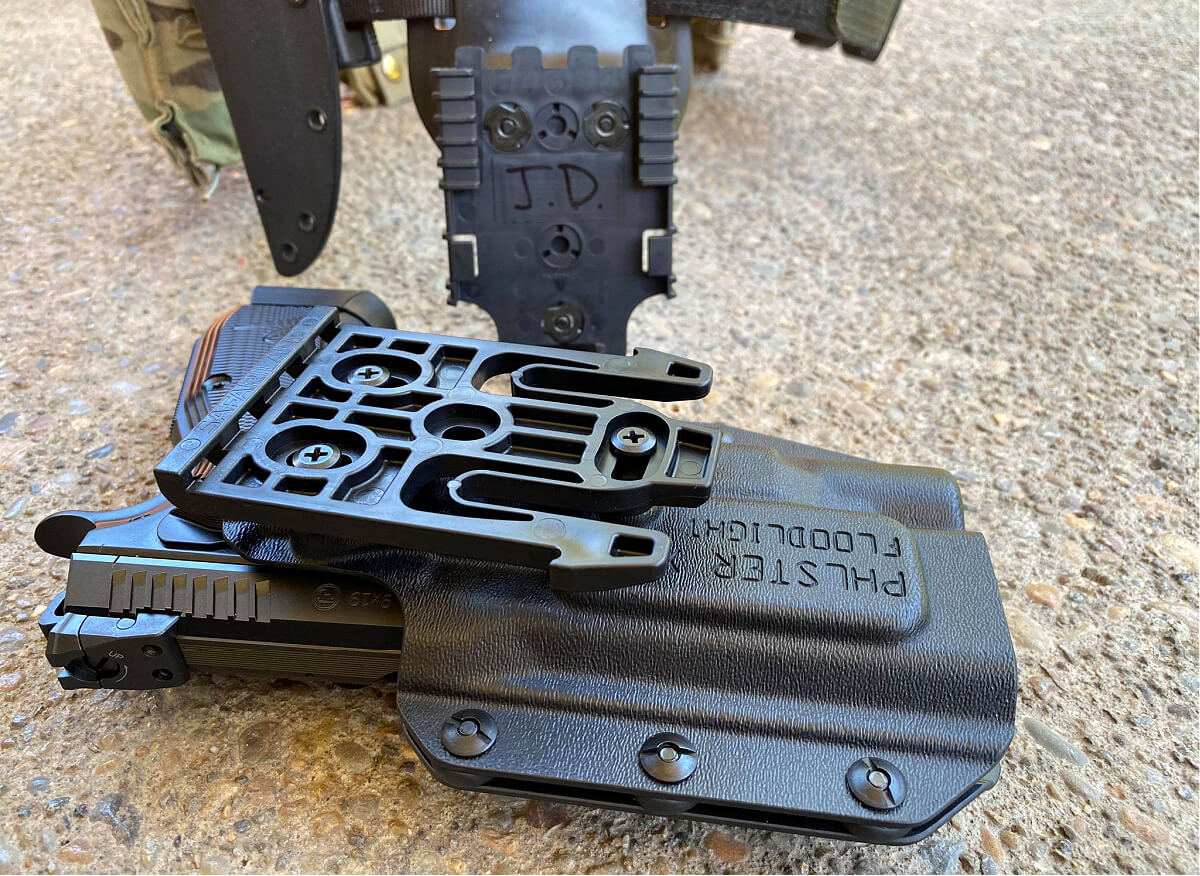 The Floodlight attaches to both G-code holster hangers or the Safariland systems like the QLS (pictured). 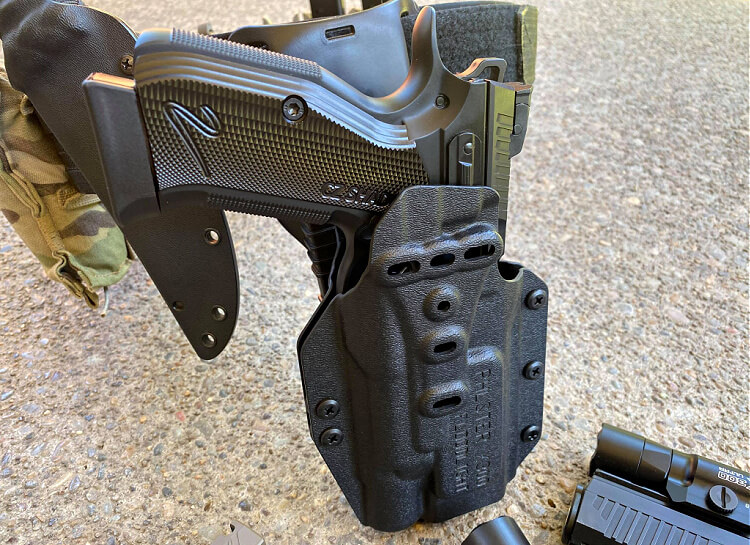 The PHLster kydex seems a little thinner than I’m used to but does a good job of holding the pistol. We will see over time how it holds up. PHLster offers a No Questions Asked lifetime warranty for their products, so it is nice to know they stand behind their stuff. I would be curious to try to get one wrapped and see how it feels, similar to what many people do to Safariland holsters but that’s strictly aesthetic so I’m not terribly worried about it. The holster is predrilled for either attaching to G-Code or Safariland holster hangers and comes with a Blade-Tech Tek Lokbelt attachment as well.

The holster in IWB comes with soft loops but has the option to add on Discreet Carry Concepts Mod 4 1.5” kit which has proven worth the money.

After playing with the OWB floodlight I decided to give the IWB version a try as well. The IWBversion is also a two-piece design and comes with two soft loops as well as hard plastic clips that can be swapped out if you prefer. It also comes with a concealment wing that helps keep a lower profile and limit printing while carrying concealed.

There is an option for Discreet Carry Concepts Mod 4 1.5” kit that I also sprung for to add to my holster. The two versions (IWB versus OWB) vary slightly in how they hold tension to the pistol. The OWB one uses various sized washers to attain a weapon specific fit while the IWB version uses a bungee routed through one side. The other side is held by screws and washers which can be tightened to adjust the tension of the holster around the light. I adjusted the holster till I had a nice distinct click as the pistol gets seated and I can turn the holster over and the gun does not fall out with light shaking. 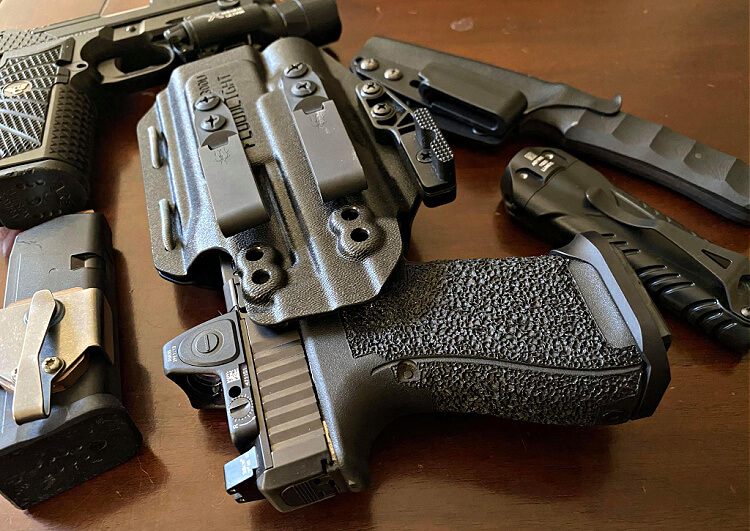 Pictured with my Gen 5 Glock 19 from Agency Arms with an RMR, the Floodlight allows for RDS as well as suppressor height sights”

Typically, I carry either an Agency Arms gen 5 Glock 19 with an RMR, a Wilson EDC X9, or a GrayGuns p320 Xcarry in Appendix Inside the Waste Band (AIWB). Three very different pistols that I was not carrying with a light attached. The length of these guns allowed me to sit easily without them digging into my thigh or crotch in their respective holsters, and I was a little nervous to add a bit of length to them all with the light.

Through some extended use now with all of the above-mentioned pistols I have to say it is still comfortable and it is nice to be able to just use the same holster for all of them. The guns all slide in with a distinct click and the feel of each of them doesn’t change as I sit and move while wearing the holster, as the holster shape is the same. The discreet carry clips firmly secure the holster to both my Lead Devil and Ares Gear belts that I rotate between.

Just for the hell of it I also fit various other pistols from my safe into it to see how they all fit including a railed 1911, full-size Triarc 2011, full-size RDS compensated P320, P226, and Glock34 and RDS 17 with and without threaded barrel and they all fit with a nice distinct click into the holster.

Read another perspective on the Floodlight from PHLster!

After my initial apprehension about the concept, I have to say I am pleasantly surprised. It is not an easy thing to pull off a holster that works as well as these do with as many pistols as I tried. If you don’t desire position retention for duty like that of an ALS holster, the floodlight should be an option you give serious consideration if you want to run a light full time.

If you are a one gun person and carry and shoot the same gun all the time then the options that it offers may or may not be for you. There are hundreds of kydex makers ready to fulfill your every desire in any color and pattern your evil little heart could desire.

For somebody who may rotate between a couple of platforms, runs a light on all of them, and wants the same feel and comfort daily regardless of the chosen pistol, then this may be exactly what you are looking for.