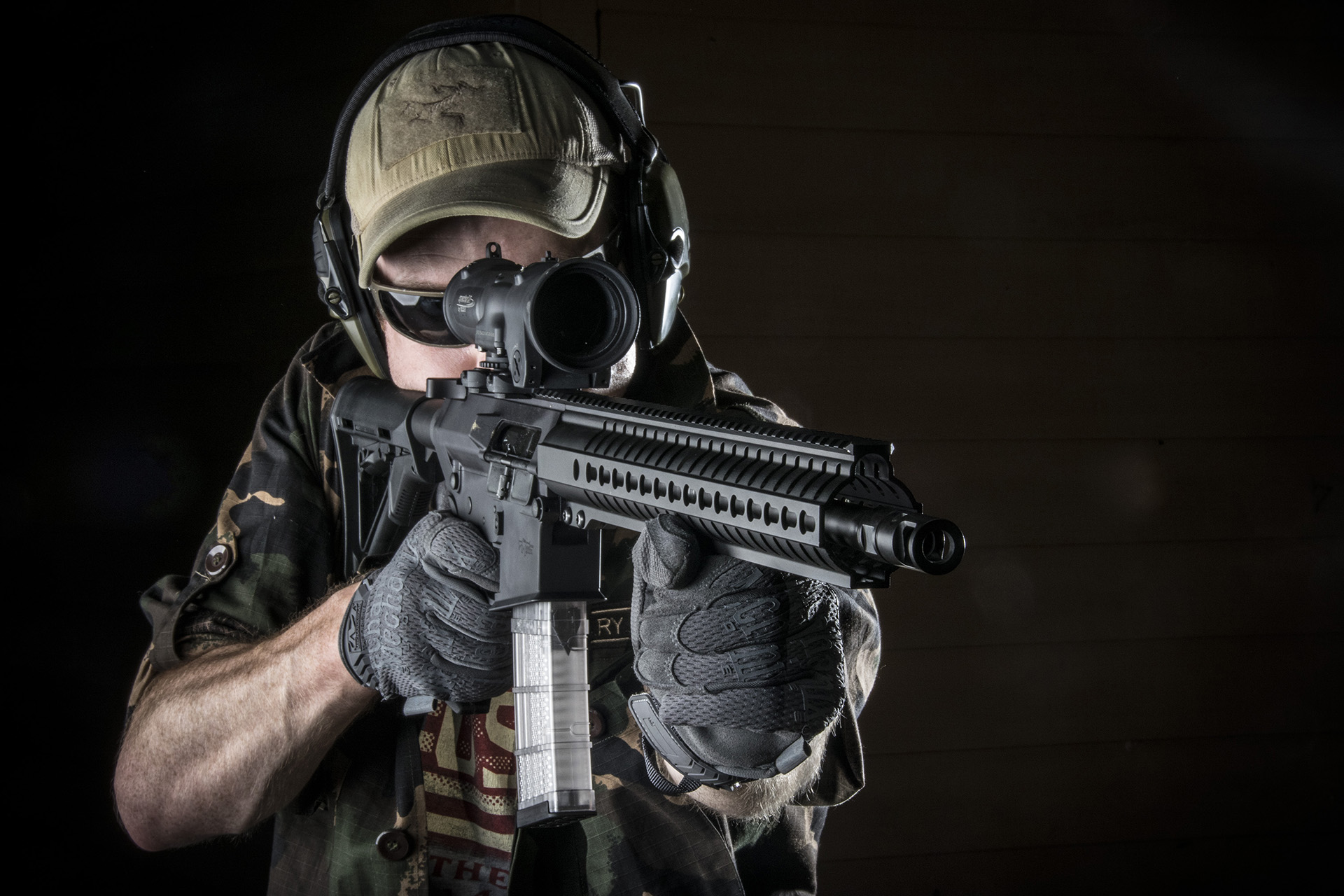 While some internet tough guys pretend they’re ‘Ministers of death, praying for war’, the reality of having to use a firearm for home defense is a grim and terrifying one. Making the decision to defend one’s home and loved ones with lethal force seems like an obvious choice for many gun owners, but it isn’t so cut and dry for everyone.

Personally, I couldn’t live with myself if I had the chance to stop any terrible harm befalling my family – and while that may be the most ethical choice for me, it’s one that gun owners shouldn’t take lightly. Taking a human life, no matter how justified, takes a toll on our souls, or for you more agnostic readers, on our psyche.

Though the cost of saving the lives of you and your family may be more material.

Even if you’ve steeled yourself to the idea of that, courts are full of easily influenced jurors and blood-thirsty prosecutors, though the extent of which greatly depends on your home state – Texas for instance is a different world compared to California when it comes to gun and personal defense laws. Also, even if you’re found innocent, unscrupulous family members of your assailant will go after every cent you’ve ever earned.

Once a shooter has made the choice to at least consider the use of deadly force, they must fully commit if they truly care about the outcome.

Think of it like the meek drivers who slowly attempt to merge into fast-moving traffic before getting slammed by a semi. While their milquetoast mentality buys them a few moments more on this Earth, their reluctance to take the initiative ultimately leads to disaster.

Does that mean shooters should pounce at the thought of engaging in a firefight with every mysterious sound they hear in their homes? Not at all – it means being prepared both physically and mentally are equally as important.

When you awake at three in the morning to the sound of your daughter screaming in fright and the icy sound of shattering windows, it’s too late to ponder the moral quandary of having to shoot a man.

If you’re wondering what on Earth that has to do with picking a magazine, it’s all related. Though for me, I believe I would be remissed to not mention the cold, hard realities of the situation. That said, part of being prepared for dangerous situations at home, is having good, reliable equipment.

If a shooter is worried about their equipment not performing, they aren’t 100 percent focused on the task at hand. This is true for competition, target shooting or home defense; though each requires a unique approach and solution.

As I mentioned in my AR15 magazines guide, extended magazines are great for competition use, but their ungainly weight and added length/bulk make them a poor choice for navigating the tight hallways of a residential home.

The key to picking the perfect home defense magazine is to set out certain practical ideals for the magazine, and choose a solution that meets or exceeds as many of those metrics as possible. For this guide, I’m going to use my own metrics, but I’ll present them in such a format that they can be tailored for other shooters.

The five areas I use to narrow down my selection are reliability, durability capacity size and weight.

“But Jim, you forgot price!”

I didn’t forget price, I intentionally excluded it.

When picking any product that could potentially save your (or someone you love’s) life, cost should be the least influential aspect. After all, would you skimp on a life jacket or seat belt for your child because it was a hundred bucks more than you budgeted for?

So we’ll start with reliability. This is an important concept for basically every firearm decision you ever make, save for collectors and such. An auto-loading firearm is an expensive, awkward, single-shot piece of junk if its magazines aren’t feeding correctly.

The best way to determine which magazine runs best in your given firearm is to test dozens of variations and eliminate them based on your personally experienced failures, while minimizing as many variables as possible. So shooters should load the same ammunition they intend to use in a home defense scenario. Also, be sure to clean the gun between tests.

This is prohibitively expensive for most shooters, so I normally suggest narrowing down your selection to three examples: what the military uses, (if a military uses the gun) what competition shooters use and what the factory ships the gun with.

The US Military issues their rifles with STANAG aluminum magazines, but soldiers often purchase polymer Magpul PMAGS, making both of these an acceptable solution. On the competition side, Magpul and Lancer L5 Warfighter magazines rule the day. As for factory magazines, most tactical rifles today ship with Magpul PMAGS for two reasons: they work, and they’re inexpensive.

So we’ve got our selection to USGI Aluminum 30-round magazines, Magpul PMAGs and Lancer Systems L5AWM mags.

Further narrowing down the selection process, let’s take the next metric into consideration – durability. My personal favorite test for this is as simple as it is effective: a drop test.

Get somewhere high enough to drop your fully-loaded magazines approximately ten feet onto concrete. (Note: do not throw them, you want to let gravity determine their velocity, not your arm strength)

Inspect each magazine for anything other than cosmetic damage, and discard any with cracks.

For me, this resulted in the elimination of the USGI aluminum magazine, whose body deformed and prevented the magazine from fitting any magazine wells. The Magpul magazine regurgitated about a half dozen rounds and showed minor scuffing, while the Lancer lost a single cartridge and scrapped its baseplate.

Since these magazines will reside at my bedside, this test was sufficient to determine their ability to withstand abuse. If I were going to deploy somewhere with mechanized infantry, I’d like test how well these mags tolerate being ran over by heavy vehicles. To point here is to always tailor your test to the target environment, and make sure not to go overboard. If my favorite magazine melts inside a hot oven or stop .50 BMG rounds, that doesn’t invalidate an otherwise completely reliable performance.

Also, after these durability tests, be sure to use a fresh example for home defense: there’s no sense in taking chances on an invisible crack or hairline fracture. Though you should obviously run your unsullied version through your chosen home defense firearm a few times just in case.

With reliability and durability out of the way, it’s time to address capacity and the directly-related issue of size. For the foreseeable future, the larger the magazine, the more rounds it holds…at least until we manage to capture tiny black holes to provide endless streams of ammunition.

As such, picking an ultra-capacious magazine tends to have diminishing returns; especially if the host firearm has a sizable magazine well like the AR15. More on that in a moment.

For now, I take a page from the Roman architectural playbook and subscribe to a golden ratio of magazine-to-rifle size.  Unlike the Roman ratio, mine is a nice easy whole number – one.

I try to make the magazine extend no further than the lowest handing portion of the firearm itself – this obviously doesn’t apply to tube-fed firearms. For guns like the traditional-stocked Ruger Mini-14, this is a little tricky as the stock only extends downward far enough to accommodate a 10-round magazine.  But, extending past that isn’t as big of a concern since the Mini has such a low profile.

For the more prolific AR15, I try to pick magazines that don’t extend past the pistol grip if possible. I do this because it makes shooting from either a prone or supported position much easier. From the prone, this means not having to balance the rifle on its magazine. For shooting supported or from cover, it’s one less protrusion to get snagged while manipulating the rifle.

Keeping your defensive tool compact means making it more maneuverable in close quarters and tight hallways. It also makes you more mobile. Another contributing factor to this is weight.

One can subscribe to my ratio theory and still have a tremendously capacious magazine – just look at the Beta Company drum. It barely protrudes past the pistol grip and holds a whopping 100 rounds of 5.56mm ammo.

It’s made of plastic, yet it weighs a freakin’ ton, because it holds a ton of ammunition. This is fine, if you’re not concerned with moving around with your firearm. So shooters who either don’t have children or family members residing in their homes can pick as high a capacity magazine as their budget or local laws permit.

But if there is even a small chance you’ll be forced to venture out from your bedroom to rescue children or elderly relatives, this weight can be a curse. Manipulating a long arm indoors is already pretty difficult. Add extra bulk and weight and the logistics of flipping light switches and turning door knobs while one-handing a fully-loaded carbine becomes daunting.

This advice, like most I give, is situational, and carries a caveat. Ideally, when dealing with an armed home invader, shooters should take a defensive position in their bedroom facing the only means of egress. Then, call 911, explain that someone is in your house, you’re armed and are currently in fear of your life.

Most importantly, nothing in your house is worth dying for that isn’t alive – if you can help it at all, stay put. It’s always easier to defend than attack.