Delta Force, SF veteran, firearm trainer, and all-around hilarious guy Pat McNamara, aka Pat Mac, wrote a book a while back called T.A.P.S. on firearm training. The book was less about how to shoot a gun and more about how to build a training plan for police and military units. There is still a lot of good information and a lot of good and creative drills. One of the simpler drills is something called the Spray and Pay drill. You read that right. It’s Spray and Pay, not “spray and pray”.

The idea of the drill is to mix both accuracy, stress, and physical activity together to make shooters perform to an established time and accuracy standard. If they don’t do well, then they pay. The drill is very adaptable, with Pat giving you an example of how to run it and then letting you run it by yourself and adapt it as necessary. 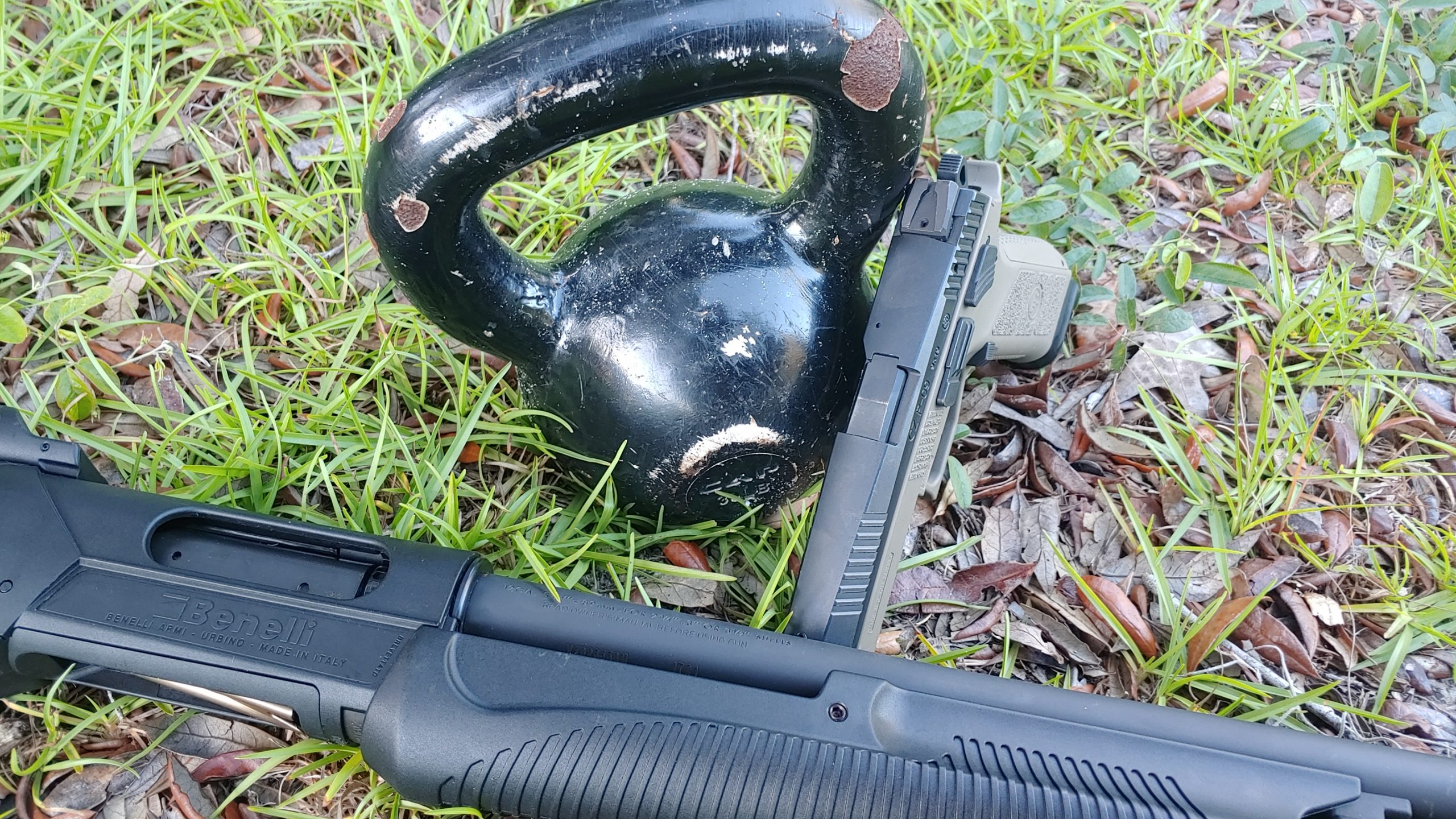 This can be a competitive drill with multiple shooters or a solo drill. With at least one other shooter, it’s a fun way to train and compete. Competition often adds another level of stress, and stress inoculation can be a very good thing.

Spraying and praying here is counterproductive.

Adaptability is the name of the game here. You can run this drill with a rifle, a shotgun, or a handgun with various different tweaks to the rules and standards. You can set your own standards and shoot it how you see fit. The setups I’m detailing are what I’ve found to be solid ways to train. A shot timer, and ears and eyes is a must-have for all drills.

For the rifle and pistol runs, you’ll need your weapon, one rifle magazine, one pistol magazine, and five rounds of ammunition per run. In terms of targets, you can want mannish-sized targets with a smaller defined area inside of them. Something like an IPSC target works great, with the A-Zone being your smaller target. If that’s not available, you can attach a 3×5 index card to any target to get that small defined area.

For a shotgun run, you’ll need your weapon and three rounds per run. The targets change, and you can be adaptable. I like to use clay pigeons for the shotgun because cardboard and paper get destroyed easily when blasted with shotguns. The pigeons are already small and easy to use. If they aren’t available, you can set up three targets similar to the rifle and pistol runs.

The title Spray and Pay should tell you a little bit about what you’re doing here. If you spray, you’re gonna pay, and you pay with physical exertion. Pat Mac says you have to run a lap for any shots fired outside of the A-zone. For adaptability’s sake, you can transform that into burpees, box jumps, kettlebell swings, or something similar to atone for the sin of missing. Whatever it is, ensure it’s difficult and punishing to encourage you not to miss.

Shooting the Spray and Pay

The drill with your rifle is almost identical to the drill with your pistol. However, we are going to increase the range to 25 yards. You’ll start in the low ready, and on the beep, you’ll fire five rounds. Same rules for this version of the Spray and Pay. Any shots outside of the A-zone (or substitute) and any shots remaining result in you paying.

For the shotgun, we are back at the 15-yard line. Loaded with buck or birdshot and in the low ready. At the beep, engage with your three rounds on the three targets in five seconds. Any shots that are missed or remaining result in you paying.

We mentioned physical exertion being your payment for the Spray and Pray. Depending on the state of your own physical fitness, this can vary quite a bit. The most important thing is not to be lazy about it. Make it five kettlebell swings per miss, two 25-yard sprints, or four alternating Turkish getups. Don’t do a single kettlebell swing per miss or saved round unless that’s all you can do.

Make yourself pay and pay hard. If you don’t, then the drill doesn’t matter, and you aren’t getting the most out of your training. It becomes a compounding problem as the pay you pay, the more likely you are to spray, so you better keep it tight.

We can flip that around and look at the par time. I feel five seconds is fairly generous for each of these runs and if you’re faster than five seconds, make it four, or three, or whatever causes a challenge for you. Don’t cheat the drill, and don’t cheat yourself.

Make It Even Harder

Ditch the timer for a target turner from Caldwell Shooting Supplies. Pat Mac mentions the use of a target turner in the original Spray and Pay drill, and it’s great for this setup. The Caldwell Target Turner is affordable, easy to find, and useable for rifle and handgun variants.

Instead of a timer, set up the Target Turner and get it at a speed that’s challenging. When it turns towards you, you have till it turns away to land those five shots. The visual, rather than audible go signal can be a trip when you’re so used to hearing that beep. It’s good to break habits sometimes and be a little surprised.

Getting Shooting (And Sweating)

The Spray and Pay drill is perfect for these hot summer days. It’s pretty fun and gives you a little dose of stress. Training alone is fine, but a little competition amps things up. No one wants to be the guy running laps or doing all that lifting. Well, except maybe for Pat Mac himself.

This drill and its adaptability are a lot of fun. You can make it as easy or as hard as it needs to be and can train yourself with a degree of stress behind every shot.

Shoot the drill ten times, and you’ve expanded 50 or 30 rounds depending on the platform and will either be a crack shot or dripping with sweat.