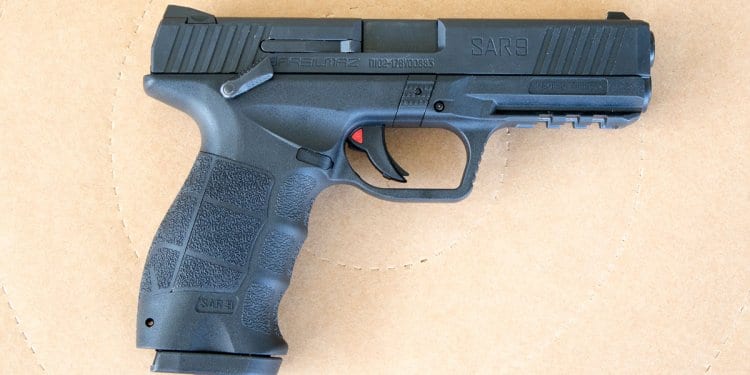 For some time now, some pretty nifty firearms have been coming to the US out of Turkey, including some very decent handguns.  Now they are joined by the SAR9 pistol manufactured by Sarsilmaz, and imported by SAR USA. 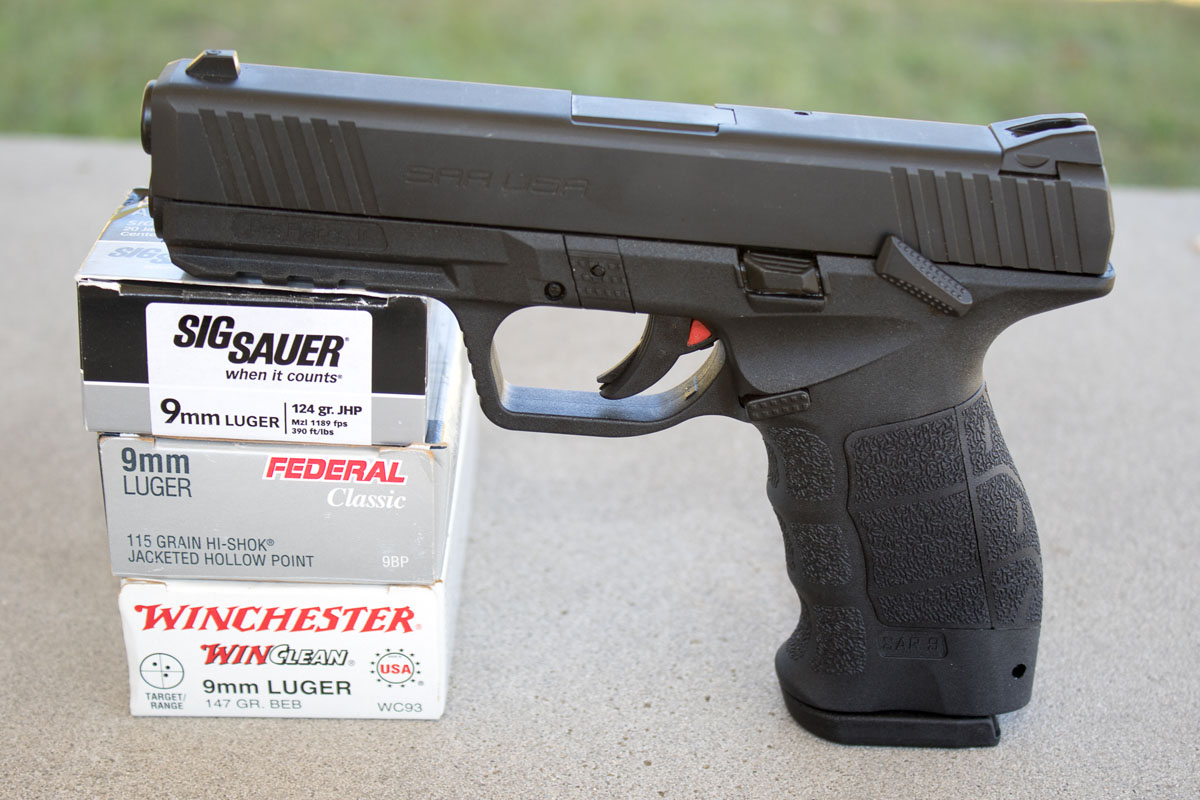 “And an HK on the bottom, judging by the grip insert treatment” finished Ray, a retired Special Forces Command Sergeant Major.  About all I could add to that was that the SAR9 had just a touch of 1911 DNA too, in the form of a safety that worked for a shooter much the same as John Browning’s masterpiece. Though witness holes only go up to 15, SAR9 magazine actually holds 17 rounds.

As is currently in fashion in the American market, the SAR9 has an accessory rail, and also well-designed slide grasping grooves both fore and aft on the slide.  Your reviewer is not a fan of front grasping grooves, but that is of course subjective. Caliber is 9mm Luger, barrel length is 4.4”, and unloaded weight is 27.1 ounces. Its fixed sights are all steel, the rear dovetailed in, and come with three white dots. Suggested MSRP is $449, but one in-the-know source expects that its out the door price before taxes will probably come down to around $399. 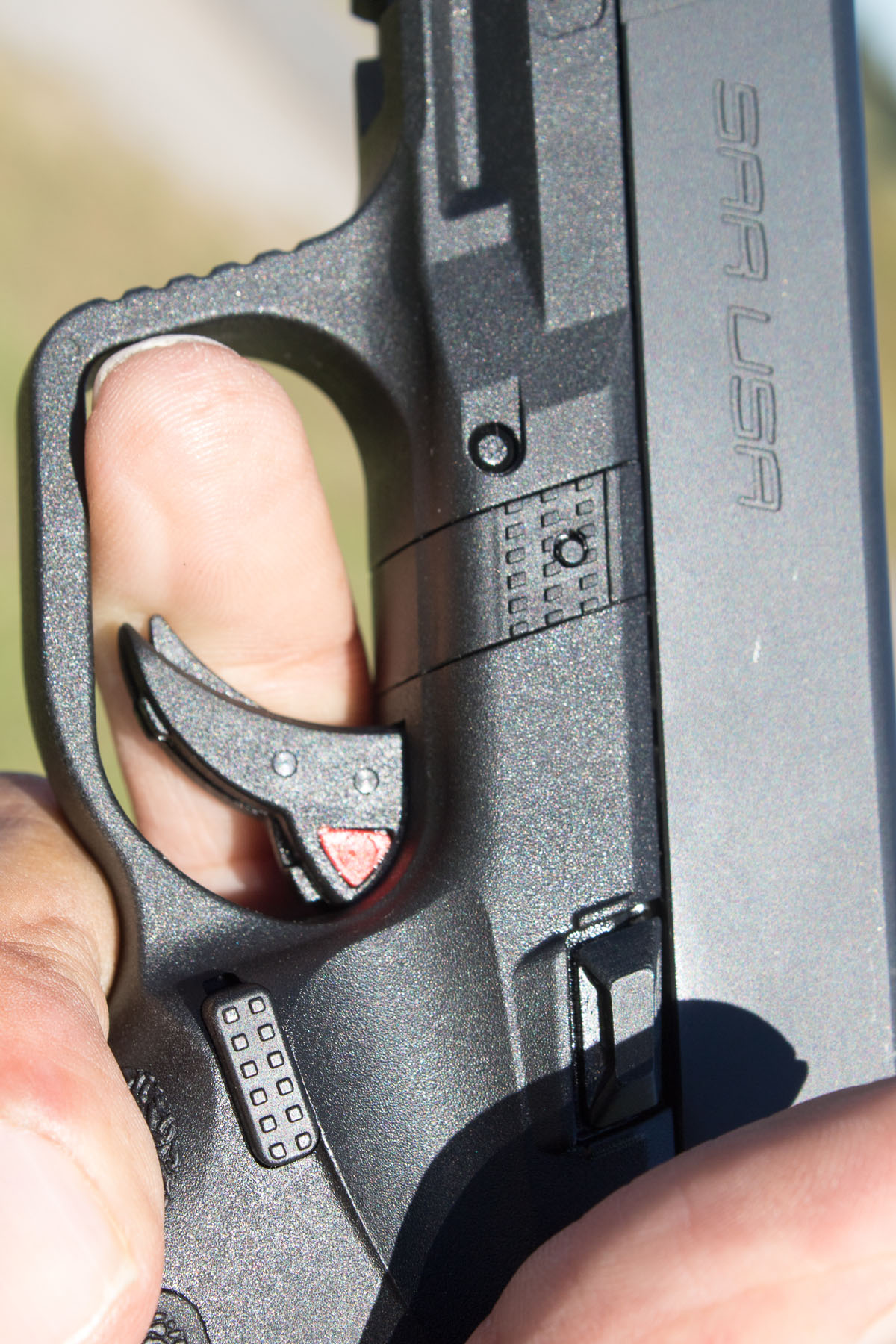 Grip configuration of SAR9 reminds many of H&K, and was liked by all who participated in test. Note thumb safety, here “on safe.” I try to test a handgun with the three most popular bullet weights in its caliber. The SAR9 being chambered for 9mm Luger, a/k/a 9X19 and 9mm NATO, that meant 147, 124, and 115 grain.  For each I used ammo that has earned a reputation for accuracy. The 115 grain choice was Federal’s famous 9BP, an “old school” standard velocity jacketed hollow point that earned a better stopping record on the street than anything else of its kind, and was also chosen by great shooters like Tom Campbell for accuracy-intensive matches such as Bianchi Cup.  With the SAR9, in punched five holes in 2.45”, with four of those in an inch and a half and the best t here in 1.30”.

This very consistent performance with all three bullet weights averaged out to 2.55” for five-shot groups, and 1.03” for best-three clusters. In a world where “four inches at 25 yards” is widely quoted as “acceptable service pistol accuracy,” I am more than happy with the accuracy of the SAR9. Glock 17 Gen4 and SAR9: which is which? Hint: look for ambi thumb safety levers, a SAR9 feature. All in all, I liked the SAR9, my only real complaint being the difficulty in manipulating the thumb safety. 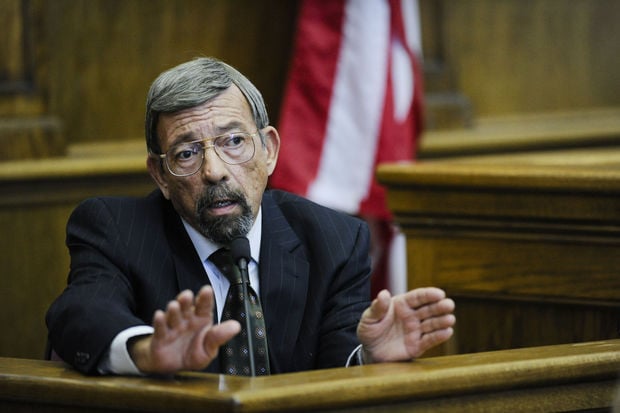 AMERICAN HANDGUNNER since the 1970s, and has published thousands of articles in gun

magazines, martial arts publications, and law enforcement journals. He is the author of some

twenty books on firearms, self-defense, and related topics, including “In the Gravest Extreme”

and “Deadly Force,” widely considered to be authoritative texts on the topic of the use of lethal

The winner of the Outstanding American Handgunner of the Year Award in 1998, Mas has won

the title of Five Gun Master in the International Defensive Pistol Association. He served 19 years

as chair of the Firearms Committee of the American Society of Law Enforcement Trainers, and

Educators and Trainers Association. In addition to teaching for those groups, he has also taught

shooting cases since 1979, and served as a fully sworn and empowered, part time police officer

for 43 years, mostly at supervisor rank. Ayoob founded the Lethal Force Institute in 1981 and

served as its director until 2009, and now trains through Massad Ayoob Group. He has

appeared on CLE-TV delivering continuing legal education for attorneys, through the American

Law Institute and American Bar Association, and has been retained to train attorneys to handle

Criminal Defense Lawyers. He also appeared in each episode of Personal Defense TV