New guns and gear are always introduced at the National Rifle Association Annual Meetings (NRAAM,) and this year is no different. Many companies have announced and are showing new firearms and accessories at the big event in Atlanta. While I cannot possibly list every new thing that has been introduced, I do want to hit some of the highlights for you.

The new XD-E was one of the major announcements to be made at NRAAM. For about the last week, Springfield Armory has been teasing the new gun with videos and other marketing pushes.

The new XD-E is a polymer-framed, single-stack pistol that appears to blend elements of the XD Mod.2 and XD-S lines with that of a Sig Sauer P225. That might sound confusing, but let me try and explain.

Unlike the normal XD family of pistols, this gun has an external hammer and a double-action/single-action trigger. This means the first pull of the trigger pulls the hammer fully to the rear before releasing it to fire a round. When the slide cycles, it automatically cocks the hammer meaning follow-up shots are made in single action mode.

This kind of firing system requires a decocking lever to return the gun to a double-action mode. However, unlike a normal decocking lever, this one also pulls duty as a manual safety. Press it up and it is in “safe” mode. Press it down and it will decock the gun. Other than it being frame mounted on the XD-E, this is similar to the Smith & Wesson 3913 that was a popular carry 9mm back in the 1980s.

Like the XD-S pistol, this gun has a 3.3” long barrel. It is chambered in 9mm and comes with two magazines: one is 8 rounds while the other holds 9 rounds. On top is a fiber optic front sight and a two-dot rear sight.

Since this is a single stack pistol, it is relatively thin. The company lists the grip width as 1”. I suspect that the ambidextrous safety/decocking lever increases the width.

Unlike the XD-S, Springfield Armory opted to include the utterly ridiculous “Grip Zone” markings on the XD-E. Introduced with the XD Mod.2 line, the inclusion of the words Grip Zone on the pistol grip has been widely mocked by shooters since its debut. It is baffling to me why they would include it on another line of guns.

The new XD-E pistols will have a suggested retail price of $519. No word if Springfield Armory has plans to later introduce a .45 ACP version of this gun.

This is one of the more exciting new products that I’ve seen coming out of the NRAAM this year. The Silent-SR (pronounced “silencer”) ISB is an integrally suppressed barrel assembly for the Ruger line of Takedown 10/22 firearms.

Ruger uses a 16.12” legal barrel length, but with an effective barrel length of only 10.62”. The internal baffle stack is removable by the shooter for cleaning. The baffles are made of 17-4 stainless steel for a long life. The barrel and front cap are also made of stainless steel.

What kind of performance can you get from this suppressor assembly? According to Ruger, standard velocity .22 ammo averages a little over 113 dB. Of course, ammunition selection, elevation, and other factors can play into how much noise the gun will make when fired.

Since it was designed as a complete assembly, you just snap this barrel onto the receiver of the gun as you would any standard 10/22 Takedown assembly.

Suppressors tend to be expensive partially because they are made in relatively low numbers. Rarely does a suppressor achieve an economy of scale that allows them to be very inexpensive. However, Ruger is selling these at a very attractive price: only $629. Yes, a .22 LR suppressor can be purchased for less, but this is a complete barrel assembly that quickly snaps onto the gun. This, combined with the BX-25 magazines, definitely lets you know this is a company that has moved well into the 21st century. 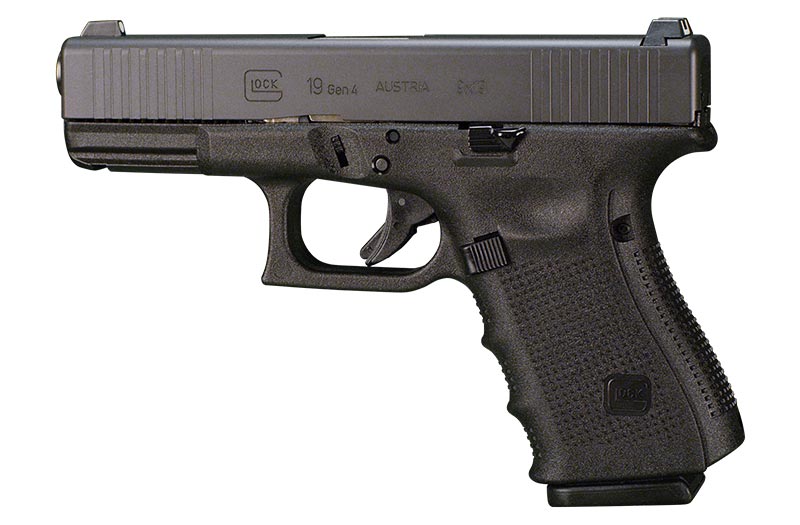 Glock announced at NRAAM that it would offer a number of special runs of guns this summer for its customers. There is nothing revolutionary in this crop, but there are some nice options if you are in the market for a new Austrian gun.

The one that made the biggest splash at the NRAAM announcement was a Gen4 version of the G17 and G19 pistols that has forward slide serrations. These are the same style as the serrations that have been seen on the near-mythical G17M pistols that are supposed to be in the hands of some law enforcement agencies.

However, unlike the G17M, these guns still have the finger grooves that a lot of shooters have complained about since the third generation pistols were introduced during the last century. These pistols will also have metal sights good and and “extended controls.” Based on the photos, the extended controls appears to mean the gun has an extended slide stop. These will come with standard capacity Glock magazines.

These guns vary in price depending on which model you are looking at. According to the company, the guns should begin shipping on June 1.

CMMG showed a new line .45 ACP firearms at the NRAAM. These new guns are part of the MkG45 Guard line that includes a pair of carbines, a PDW, and a pistol.

Patterned after the AR-style rifle, the MkG45G uses a completely different recoil system to operate the guns. CMMG developed a special Radial Delayed Blowback system that causes the bolt to turn while moving to the rear. This allows the gun to absorb some of the rearward force.

The result of the RDB system is less felt recoil without going to a gas operating system. Additionally, the guns are lighter than they otherwise would be with a straight blowback system. Since a significant amount of recoil energy is used up in the radial system, a lighter buffer and buffer spring can be used.

As they ship, the guns should be very reliable with standard pressure .45 ACP ammunition. If you prefer to run +P ammo, the company is also offering a bolt weight kit to fine-tune the reliability. This same kit is also useful if you decide to attach a sound suppressor to the gun.

The suggested retail prices on these guns start at $1,299.95 for the base model carbine. You can read more information on these guns in James Grant’s article here.