Before I wrote this, I only knew two things about New Jersey. First, it’s where The Sopranos took place. Second, it’s called the Garden State. Now, I’ve added a third thing by reviewing and conducting the New Jersey Police Subgun qualification course. For brevity’s sake, we’ll call it the Subgun Qual. It is fairly simple and can be done with your subgun, PCC, rifle, or braced pistol.

I love this qual course because I like shooting PCCs and subguns. I always have, and with the limitations of my home range, these guns are just perfect for me. Before diving into the subgun qual, let’s talk about the gear you’ll need to rip and roar through it.

Kitting Up for the NJ Subgun Qual

The qual calls for a selective fire or semi-auto subgun. I went with the FourSix once more. You’ll need at least 60 rounds of ammo and a 50-yard range. You’ll need a single target, and the course requires the use of an FBI Type Q Target. You can switch up if necessary. I would still use a smaller than average target because the Q is smaller than your normal man-sized target.

The subgun qual calls for cover, so find something you can hide behind. As always, you’ll need your eyes, ears, and shot timer.

Unless you have a 60-round magazine, you’ll likely need a spare mag and the means to carry it. I carried it via a belt pouch and called it a day. The course of fire doesn’t call for reloads in any particular string. Instead, the subgun qual notes that:

“Mandatory reloading may be forced anywhere in the course at the discretion of the supervising firearms instructor. Otherwise, ammunition management is the participant’s responsibility, including “secondary weapon transition techniques.”

We start up close and make our way back to the 50-yard line. Setup your own reloads throughout the course of fire. I tended to practice my reloads at the 3, 5, and 10-yard lines. You’ll fire several strings at this range, and I did a reload on the last string at each yard line. Let’s kick it off.

At three yards, the target is basically in your face. You’ll start from a low ready position, and on the beep, you’ll aim and fire a double-tap. You’ll repeat this drill two more times.

This might seem like Deja Vue, but at the five-yard line, we start in the low ready and aim and fire a double-tap on the beep. Repeat the drill two more times. Yep, fairly identical, but the next drill changes it up.

From the seven-yard line, you’ll start in the low ready. You’ll aim and fire a double-tap into the body and a single shot to the head at the beep. You’ll repeat the classic failure to stop drill for the subgun qual one more time.

Oh boy, deja vue once more. From the low ready, aim and engage the target with a double-tap. Repeat the drill two more times. The subgun qual seems to love double taps to the torso at multiple ranges. This is why I implemented reloads for these yard lines.

String 1: Yep, 20 rounds at 25 yards. It’s a long stage of fire, but a good one. The first string is very simple. At 25 yards, you’ll start in the low ready. At the beep, aim and fire one round. Repeat this drill four times.

String 2: it’s time to use cover. For this string of fire, assume a kneeling position behind cover. On the beep, you need to roll out and fire two rounds on target. Repeat this drill one more time.

String 3: you’ll be behind cover but now standing. You can peak over or peak around the strong side of cover for this drill. On the beep, roll out, and fire two rounds on target. Repeat this drill one more time. 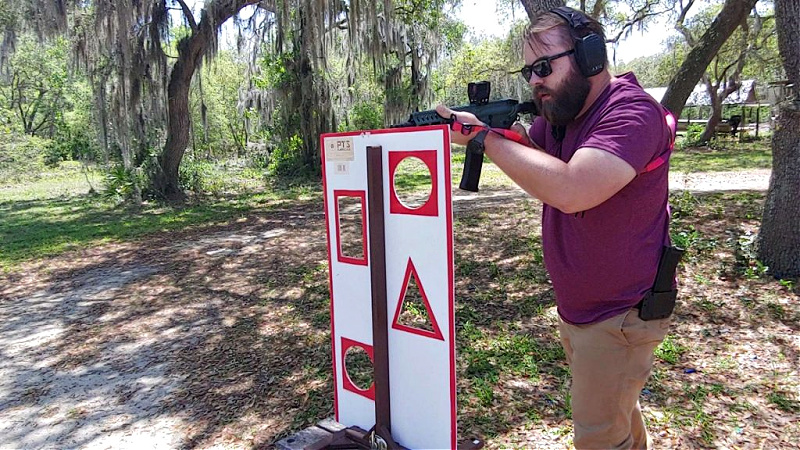 String 4: we are sticking behind cover and going back to the kneeling. This time we are on the support side of cover, or the weak side, if you will. At the beep, roll out and fire two rounds. Repeat this drill one more time.

String 1: assume a good prone position. On the command to fire, engage the target with two rounds in four seconds. Repeat the drill one more time.

String 2: you’ll need cover for this position, and you’ll assume a strong side cover position. On the beep, roll out and fire two rounds in four seconds. Repeat this drill one more time.

The Subgun Qual Is Over

The qual is fairly long as far as these things go, and it implements lots of different ranges and multiple positions. The use of cover is a very nice touch as well. It’s quite diverse in the exercises practiced. If you implement reloads or transitions to a sidearm, you can spice it up even more. Add in the long-range shots and heavy use of cover, and you get one of the better police quals.

The only thing I’d change is the fact you shoot four identical stages at different ranges. I like the tight 1.5-second time constraint, but I think we can mix it up. Why not do a failure to stop drill, or work headshots at five or ten yards? It seems like a waste of time and space throughout the drill’s course of fire.

Even so, the subgun qual is fairly fun and not too tough. The times aren’t tight, but they aren’t loose either. You’ll need to keep moving and not take your time with the drills, especially if you toss reloads in.

What do you think? Should New Jersey also be known for subgun quals on top of their mafia shows and gardens? Let me know below what you think, and if you run the subgun qual, share your thoughts on it as well.