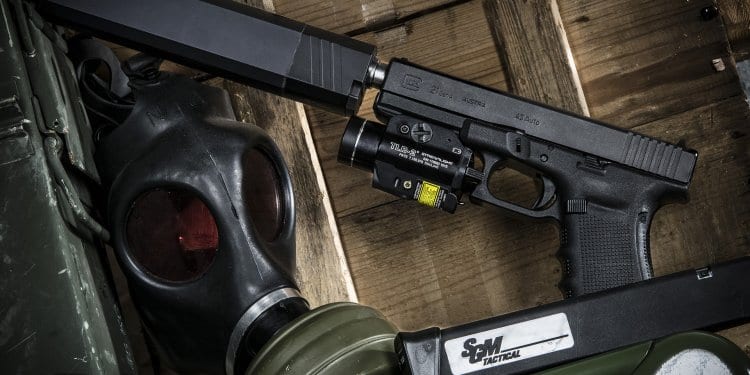 May’s magazine of the month, is the extended .45 Glock stick-mag from SGM Tactical. Formally known as Surefire Gun Magazine company, SGM Tactical made a name for itself selling affordable, standard-capacity, polymer Saiga 12 shotgun magazines in the early 2000s.

These were well received by Saiga enthusiasts, and eventually led to the company venturing into new products like their flush-fitting Glock magazines in various calibers ranging from 9mm para to .45 ACP. Previously, the only option for extended Glock magazines were imported ones that lacked any metal reinforcement, or high-quality, high-priced factory examples in 9mm.

Factory-made extended mags were limited to 9mm, as they were initially designed for the select-fire version of the Glock 17, the Glock 18. These were prohibitively expensive, and only functioned with 9mm Glock pistols. Shooters with other calibers had no recourse until SGM brought their new products to market.

Though they aren’t limited to simply functioning in Glock pistols. Several pistol caliber carbines like the Kriss Vector are designed to utilize the ultra-durable, ubiquitous polymer-bodied magazines. Indeed, due to their durability and reliable feeding, these magazines have become the gold standard for pistol caliber carbines. The fact that they also function in Glock safe-action pistols isn’t just an added bonus, but an integral piece of a bigger, logistical plan.

Preppers and pragmatists alike can appreciate a carbine and pistol sharing not only caliber, but also magazines. This makes keeping both fed during times of upheaval and uncertainty dramatically simpler.

Logistical boons aside, these SGM magazines are a fantastic investment and a great way to extend your shooting/practice sessions at the range. They increase the Glock 21’s magazine capacity from 12 to 21 rounds of hard-hitting .45 ammunition. This makes them ideal for home defense scenarios, where racing hearts and adrenaline rushes make accurate fire challenging.

When coupled with a quality tactical light, expanding defensive ammunition, and a sound suppressor, this makes an ideal home defense tool – one with a proven record of fight-stopping capabilities that won’t damage shooter’s hearing or dangerously over penetrate. Shooters looking to keep their Glock or .45 ACP-caliber carbine fed should take a serious look at SGM Tactical’s extended magazines.