The Mossberg MC1sc isn’t the first name you think of for EDC pistols. The company has made handguns in the past, most notably the Brownie. If you’re unfamiliar with the old Brownie, it is worth a google. Talk about fun guns….

The new Mossbergs aren’t so dramatic. They will be instantly familiar to most of us and were on day one of their launch. The first big difference you’ll notice is the make itself.

So what makes this a worthwhile project for Mossberg? First, it is the expansion of the brand. They dominate the shotgun scene, and are making inroads with their rifles—why not take a bite out of the pistol market?

The overall design of the MC1sc

There’s a nagging feeling eating at me. It is the logical feeling that the more rounds a magazine holds, the better I like it. Many of the single-stack subcompact 9mms on the market now hold a similar number of rounds. And the MC1 fits right in there. But there are a couple of notable guns that are similar in size that offer an increase in magazine capacity. And that’s been a huge competitive problem for the single-stacks. 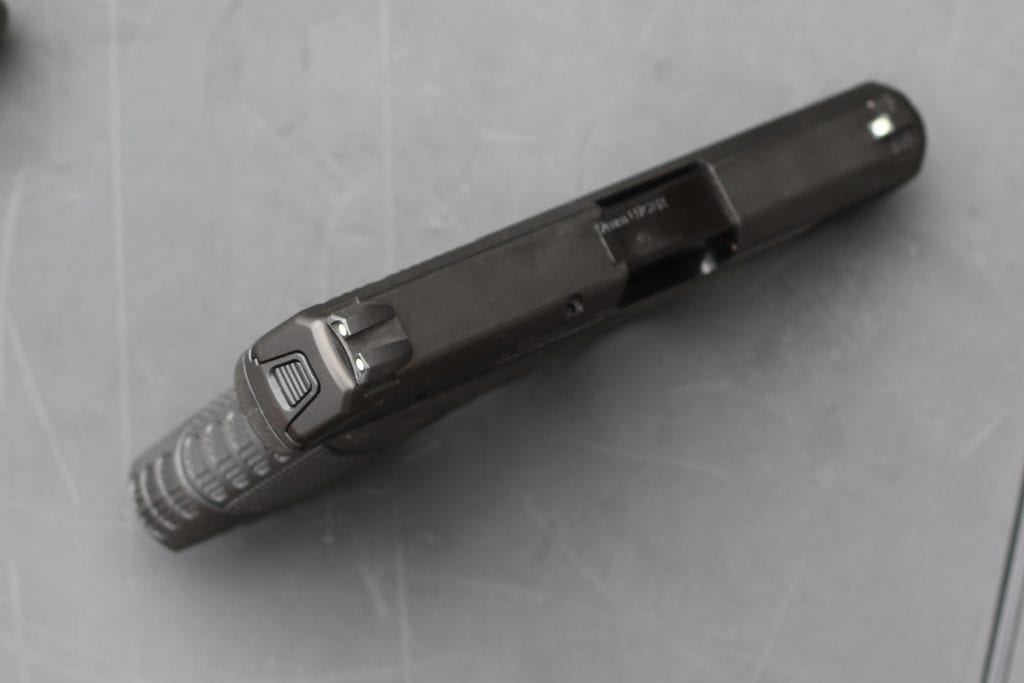 The Mosberg MC1sc is thin.

Does that make the guns like the MC1sc instantly obsolete?

Not really. The MC1 has a number of selling points. The first is its price. This version lists for $435. In a normal market, the street price would be lower by a good bit.

The MC1 is an effective tool at a reasonable price. That can’t be overlooked for a number of reasons. First is the very nature of an impulse buy. In this market, when there are so few guns on shelves at your local dealer, you may need to act fast when one is available.

The second is the precious nature of fetishized handguns. The MC1 has not yet created the devoted fan base that both loves and loves to modify guns. Glocks, Hellcats, even Shields now—they all have a cult-like group working hard to customize guns. Supply being what it is and a soaring demand has kept the price on those guns high. Not the MC1. 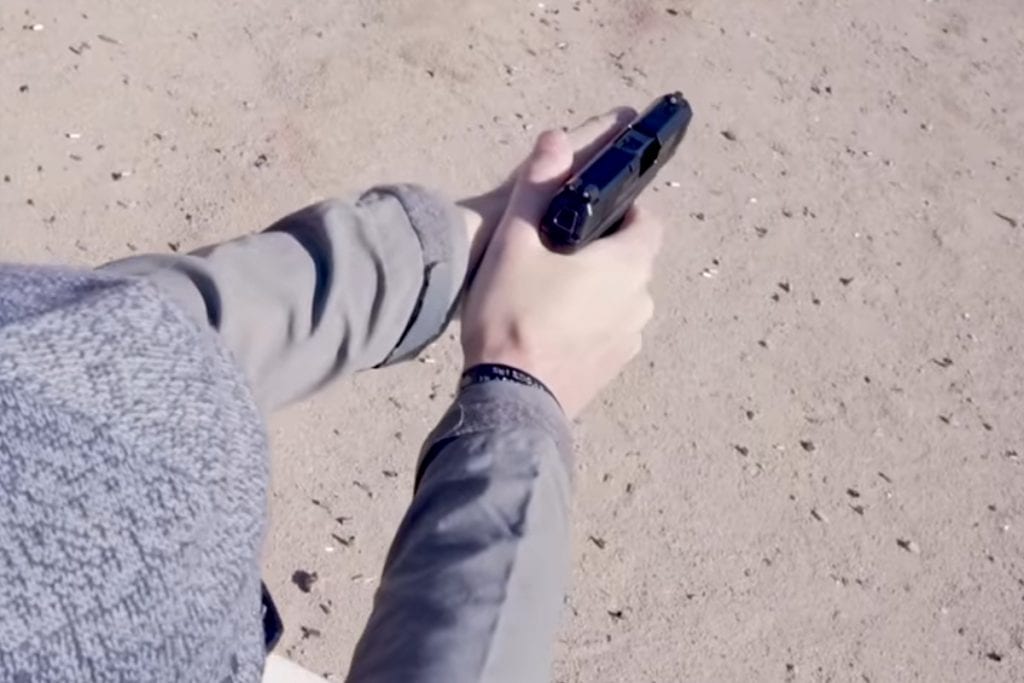 There’s enough real estate on the gun to get a good grip.

Let’s break some of this down. First, the grip is slightly contoured to fit a good-sized hand. It is subtle but effective. 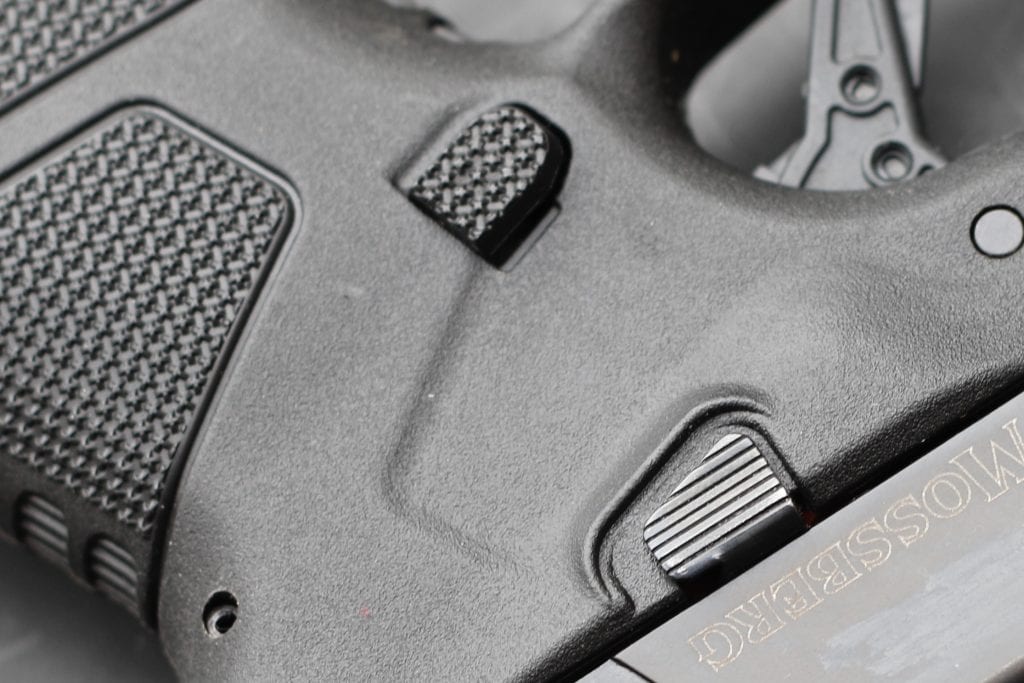 Note the slight indentations around the controls. This is subtle but easy to feel.

The grip textures on the frame are nothing to crow about. They are sufficient for control. On the positive side, they aren’t so aggressive that they’ll impede your draw or hurt your hand. The grip feels good in the hand and is easy enough to control if you have decent hand strength. 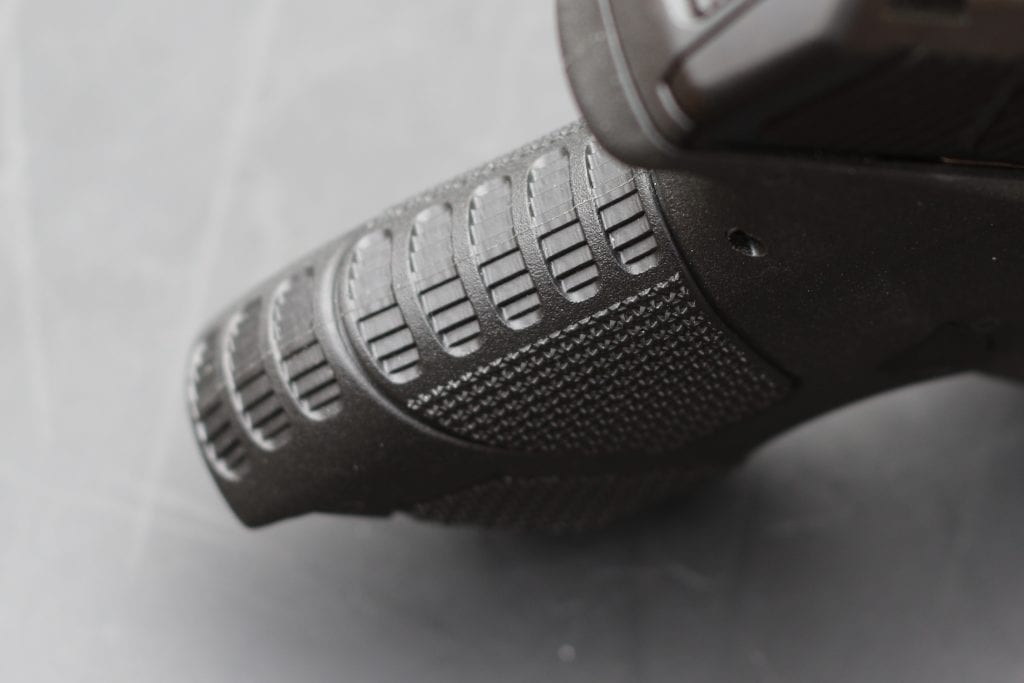 The grip on the back of the swollen grip. It is hardly aggressive.

The slide, though, is well-executed. There are serrations on the front and the rear. The thin lines are reminiscent of those on the classic Browning designs. They provide a great texture without being too aggressive. And the shallow depth of the cuts makes them easy to insert into a holster, which keeps them from catching and pushing the slide out of battery. 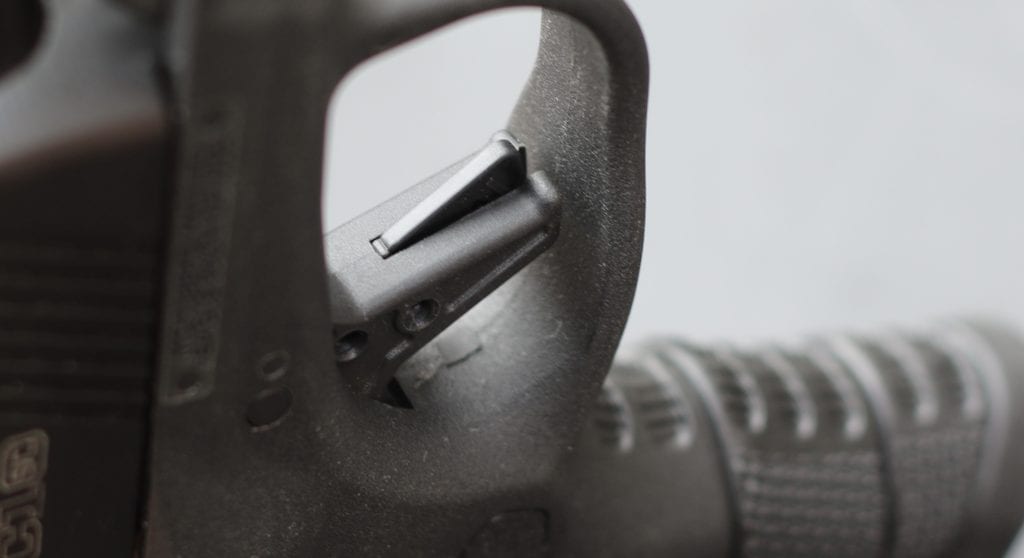 Check out the flat trigger.

One of the more jarring elements, visually, is the polymer trigger. It has a wide shoe, which is easy to find, and it has integrated blade safety built into it. When the lever is depressed, the trigger is free to fall.

Mossberg advertises a 6-pound pull. I was measuring slightly above 6 pounds. All told, though, the trigger is well done. There’s hardly any over-travel. And that 6-pound pull is ideal for a defensive handgun.

The trigger pull is crisp. It breaks clean. Why you dry-fire it, you can really feel the break. There’s a predictable amount of travel before the reset. All told, it gets the job done.

Very few guns come with such easy-to-read mags. The clear plastic and red follower make counting rounds a breeze. Mossberg calls these Clear-Count magazines. The gun comes with a six-round mag and a seven-round that is slightly extended. 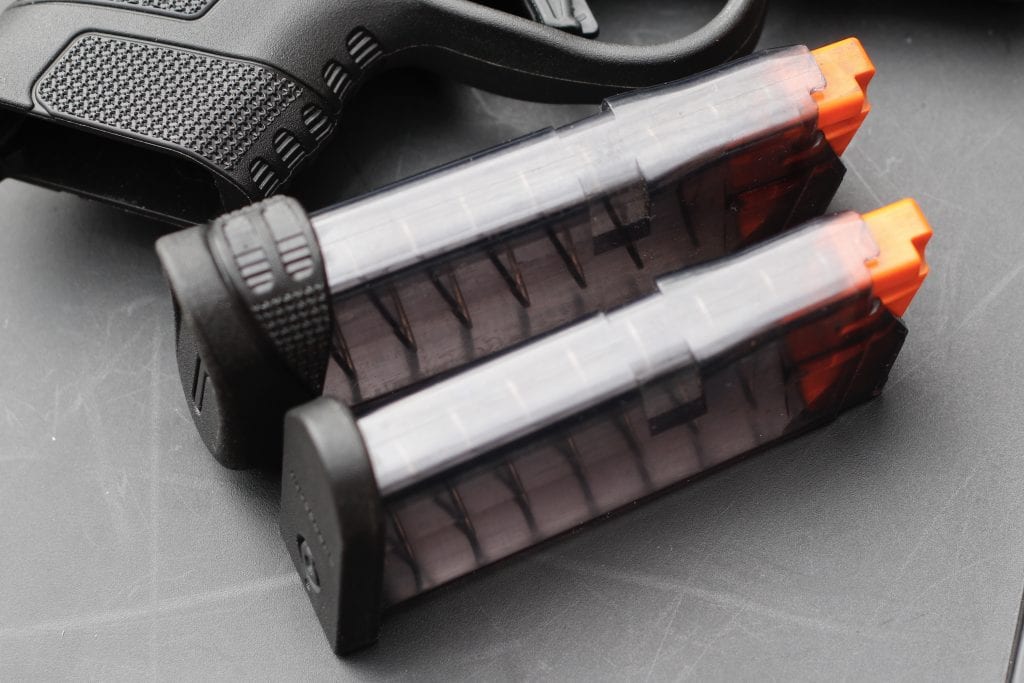 And they take Glock 43 mags. I’ve tested the fit and function and had no trouble. They insert easily, drop free, and hold the same number.

Glock 43X mags will work, too, and that will increase the capacity to 10 and extend the mag bit out of the bottom of the MC1.

There are other options, too. The popularity of the Glocks has made mags for the MC1 easy to find. One thing to note: the ProMag Glock 48, 43X 9mm 50-Round Drum Magazine makes IWB concealment far more complicated.

Back to the MC1sc—the followers are easy to see. If you, like me, can’t count to six in a stressful situation and need that quick-check of the locked slide to determine between empty and jammed, this is a boon. 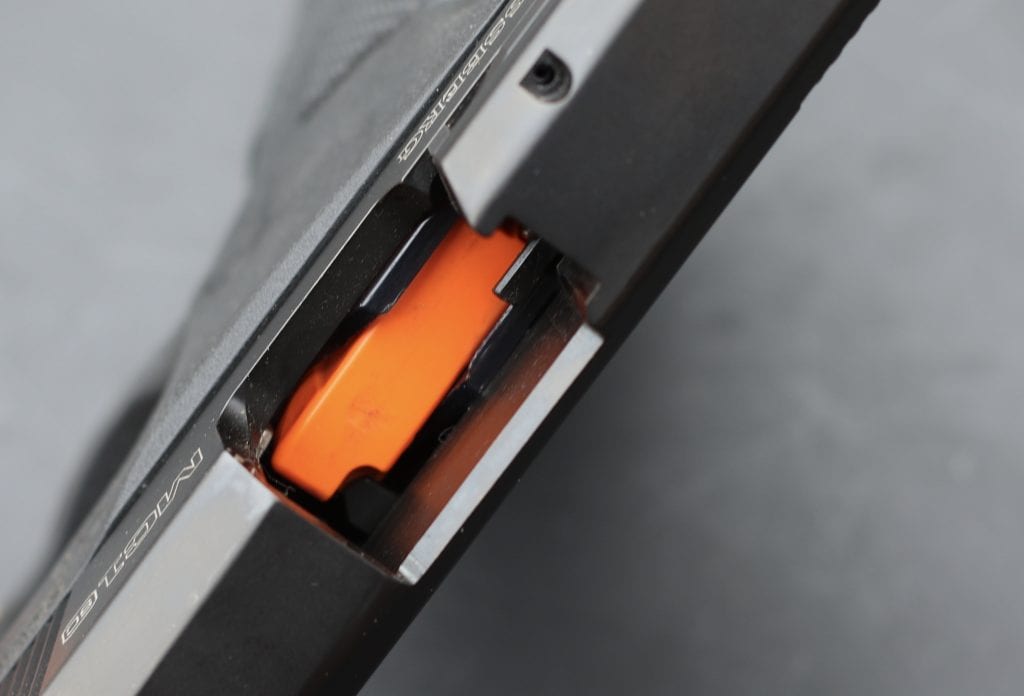 That orange is easy to see.

And the mag release itself can be swapped from the right side to the left if you’re into that sort of thing. 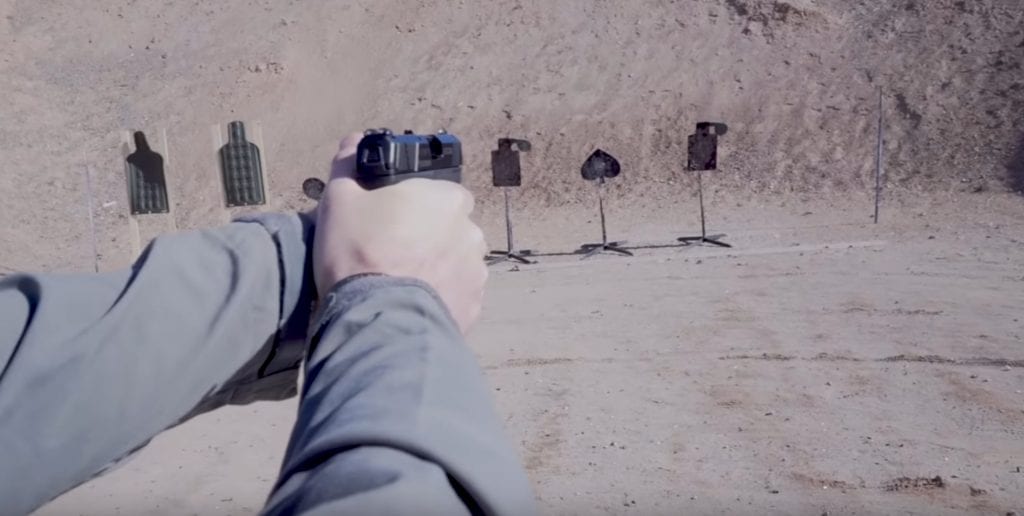 Running the MC1sc against steel.

Mossberg makes solid shotguns. After the recent sale of Remington, the 500 and 590 are poised to be the most utilitarian pump shotguns on the market. And the most accurate .223 bolt action I’ve ever owned was a Mossberg Patriot. The MC1 is following in that tradition of reliability and will deliver rounds downrange as effectively as any short-barreled 9mm can. 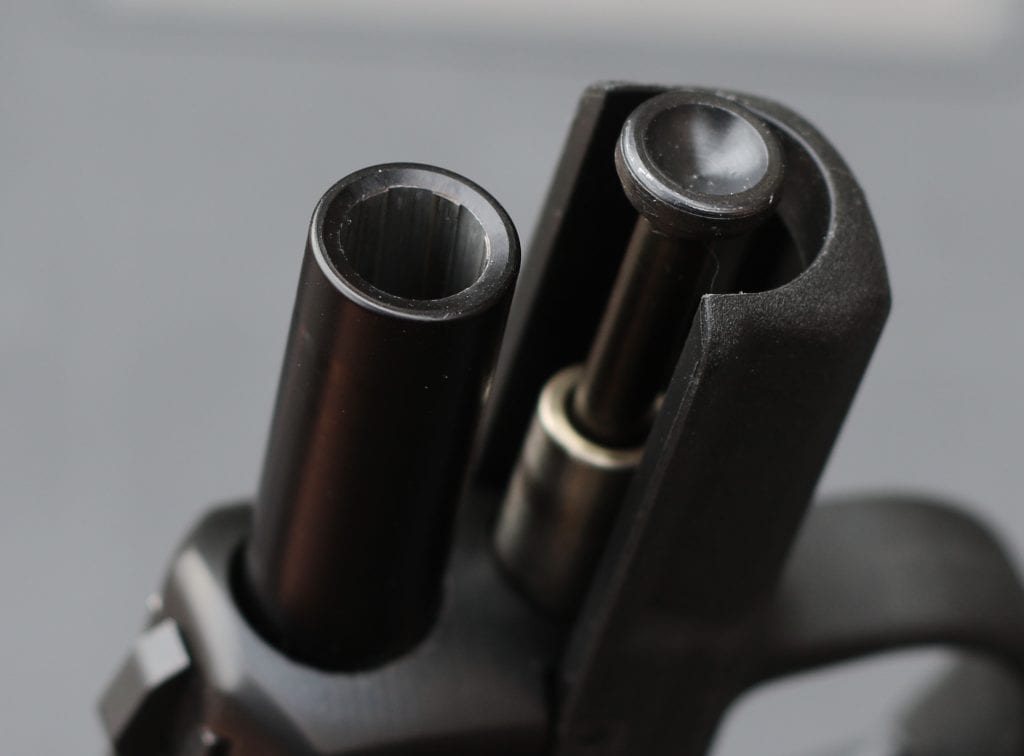 The barrel has a slight crown.

That said, keep your expectations modest. This isn’t a knock on Mossberg—not in the least. Physics always wins, and short barrels aren’t known for one-hole accuracy.

The recoil impulse is easy enough to manage. If you are making a lateral move from a similarly sized pistol, the MC1sc won’t be any trouble. If you’re moving down in size from a compact or full-sized 9mm, the MC1 will likely feel a bit jumpy.

After you’ve run through what’s left of your supply of 9mm, I’d advise giving the gun a good cleaning. And Mossberg has built in a very convenient safety measure here, too. The striker unit has to be removed from the slide before the slide can be removed from the pistol, and you can do both without having to pull the trigger.

Pulling this pin will also make the gun safe, too, if you need that extra element of safety. 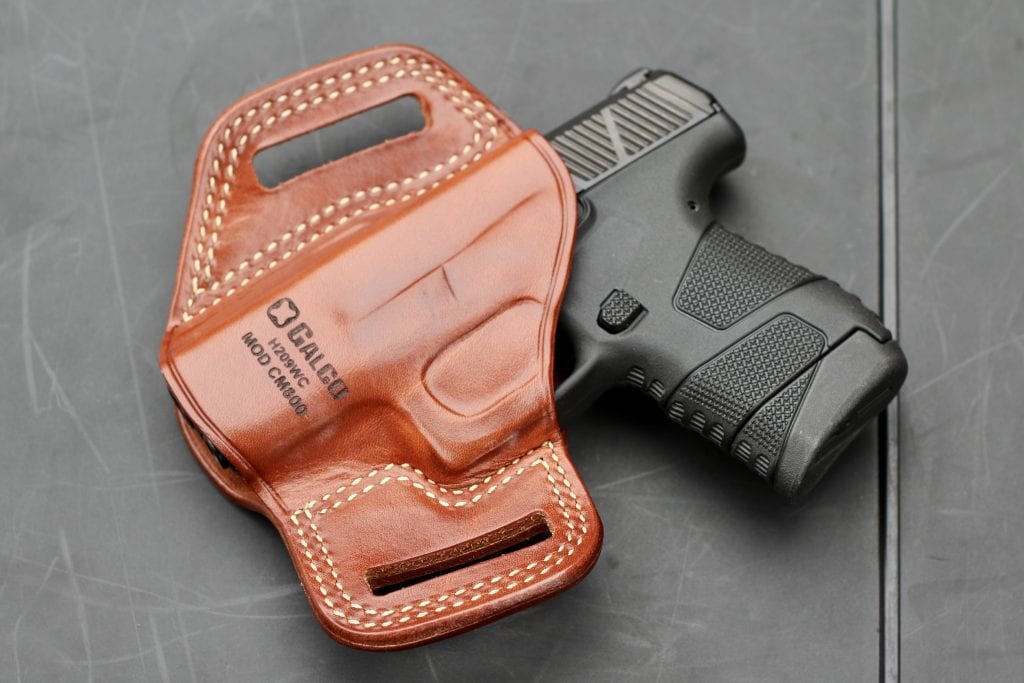 The gun fits in the Galco holsters that are cut for the G43.

So is the MC1sc relevant?

If I were judging this gun based on the available round count, I’d say it has limitations. But there’s more to this design than just that. And the whole package—including the humble price-tag—is perfectly in line with what I expect from Mossberg.

And if you want something more, there are options. The MC2 jumps up the round count (with the obvious addition of some extra length and width.

Mossberg offers the MC1sc in a number of colors. Two-tones are common, and there’s a FDE model now, too. 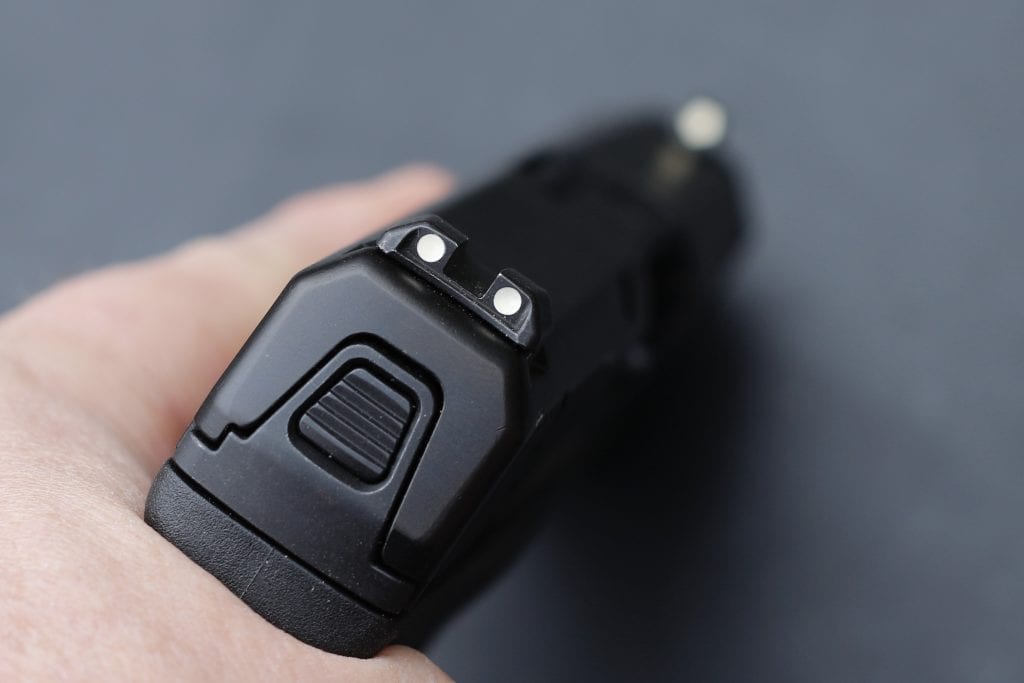 If you want to upgrade the sights, there’s a factory option that includes TruGlo Tritium Pros.

Like many of the guns in this class, the MC1sc has a dedicated laser from Viridian. Their E-Series lasers allow for push-button activation and are useful for cutting down time-to-target, especially in low-light situations.

And lastly, Mossberg has a version of the MC1sc with a cross-bolt safety. While I’m not a fan of manual safeties on EDC guns, some want them. And the cross-bolt is a reliable system, if not a common one for guns like this.

In the end, I think there’s an argument to be made for the MC1sc. Like some of Mossberg’s other designs, it is understated but effective.