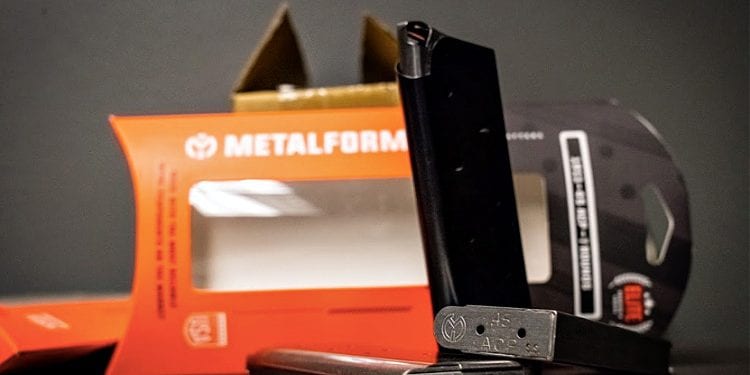 Got a Government-sized 1911 chambered in .45 ACP that needs some extra mags? We’ve certainly got plenty for you to check out. But first, take a look at the mags that came with your gun. Chances are, they’ve got an ‘M’ stamped into the baseplate, which means they were manufactured by Metalform.

Does that matter? Well, it might, depending on what you’re looking for.

Just look at what 1911Tuner has to say about them on TheHighroad forum:

“Back in 1999, I ordered a hundred of’em…evenly split between stainless and carbon. All of them are 7 round with the standard flat follower with the speed bump…as per original design.

I kept 72 of the magazines for my own use, plus a couple spares in each version just for a backup…and I’ve used’em hard. At one time, I carried all of them to the range an average of twice a week…preloaded…and emptied them all. I wasn’t gentle with them. I slammed’em home and let’em bounce on the ground when they were jettisoned. I take them apart for thorough cleaning once a year.

Last month, the welds gave up on the floorplate on one magazine. One magazine failed in 11 years. I salvaged the follower and spring.

None of the magazines has failed to lock the slide on empty except in the case of a broken slidestop lug…and that’s happened twice in two Colts…once per gun…that have seen hard use since 1991 and 1992 respectively. Not the fault of the magazines.

Would I recommend Metalform 7-round magazines? Absolutely. As far as the one that failed…If I send it back, they’ll send me another one…but I probably won’t bother to do it.”

At GunMag Warehouse, we have a very large selection of Metalform magazines with a wide variety of designs for everything from duty use to concealed carry, competition shooting, and more.

To further distinguish the models we have available, you can choose between flat, round, skirted, or pro followers. Do you want a welded base plate or one that’s removable so you can upgrade to your preferences? What are the differences anyway?

Just in case you’re not sure which follower or base plate to get, here are the details.

What is a flat follower?

The flat followers are the original Colt design followers and provide for that classic 1911 magazine look and function. The material is a high-strength heat-treated stainless 400 series, which provides for long-lasting performance and rigid slide lock action.

This one is a stainless steel 7-round mag with a welded base and flat follower.

How is a round follower different than a flat follower?

The Metalform round follower is an anti-tilt design resulting in fewer potential nose-diving issues while chambering a round. 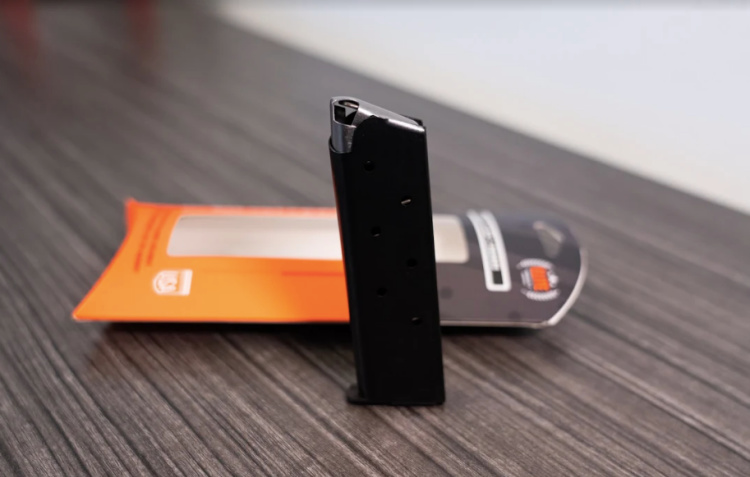 The round follower assists with a smooter chambering of the final round.

The average recreational user may not see any significant performance differences but this is the preferred follower for competition shooters of Metalform’s .45 and 10mm offerings.

Ok, so what is a skirted follower?

The skirted followers are just another designation for both the round and Pro follower designs. They have the long front round skirt that stays down below the front of the magazine after the last round has been chambered and provides the anti-tilt feature

One more — what is a Pro follower?

The Pro-Follower is a specific flat-front skirted follower used in Metalform’s 7-round  and 8-round .45 magazines only. This follower is extremely robust and reliable, made from the same high strength heat-treated 400 series stainless material, and will provide for years of reliable performance

What is the difference between a welded base plate and a removable baseplate?

The welded base plates have a flush fit, so they are more easily concealed. Removeable baseplates make it easier to get into your magazine for cleaning, and you also have the opportunity to upgrade the magazine.

Now that those details are cleared up, here are the Metalform magazines that’ll fit your Government-sized 1911 chambered in .45 ACP,  in 7,8, and 10-round capacities. Choose from black cold-rolled steel or stainless steel.

Which one is right for you?

7-Round Metalform Magazines for Government 1911s in .45 ACP 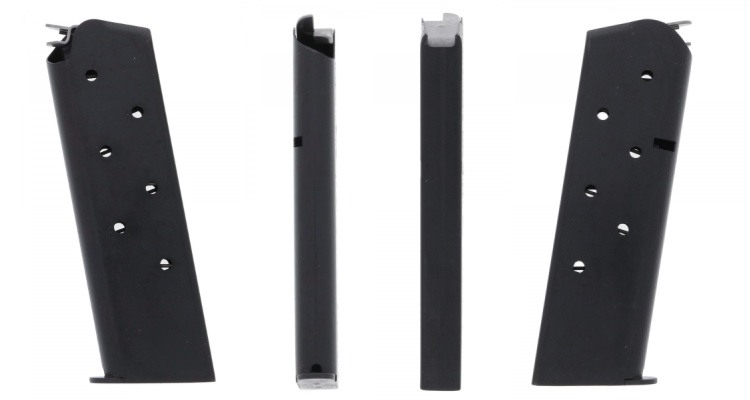 This combat-ready magazine has an upgraded flat follower and welded base plate.

2. Metalform Standard 7-round magazine with Welded Base & Round Follower 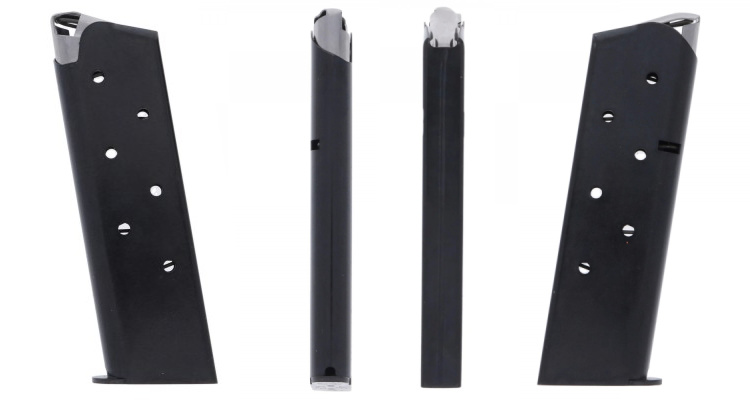 With a rounded follower for smoother feeding and a welded, flush-fitting base for easier concealment, these Cold-Rolled steel Metalform magazines are a practical choice for concealed carry and trips to the gun range.

Like Daniel says, this is an all-around great magazine with nice follower action.

3. Metalform Standard 7-Round Magazine with Removable Base and Flat Follower 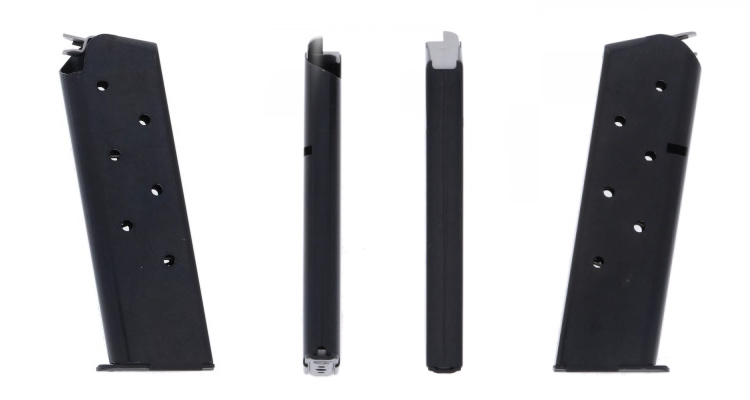 Built from cold-rolled steel with flat followers, withness ports, and a removable base plate so it’ll be easy to get in there and clean it out or replace the basepad. 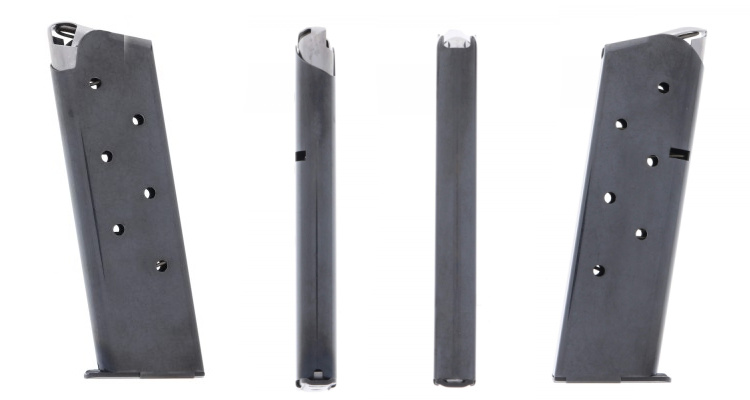 With the removable baseplate, these Metalform magazines are a flexible upgrade for your 1911 Government pistol in .45 ACP.

5. Metalform Standard 7-Round with Lanyard Loop

Often considered a vestigial remnant from back in the cavalry days, some say the lanyard loop is still useful in modern times. With some paracord attached the mag can be easily recovered if it’s dropped, especially in water, fine sand, dense brush, and night ops. 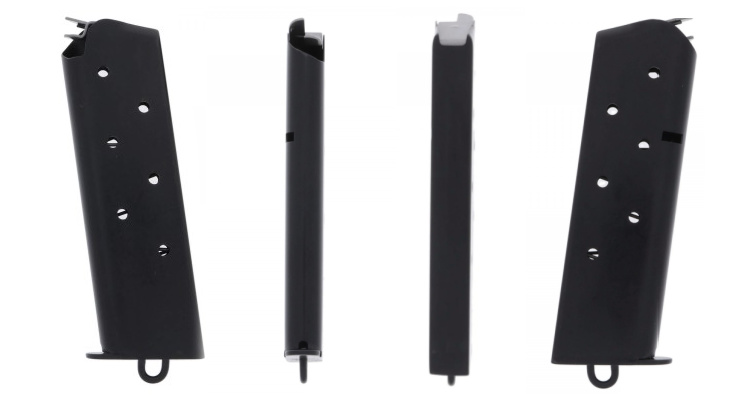 This one has a flat follower. There’s a bonus use for the lanyard, too. Just watch:

6. Metalform Standard Stainless Steel 7-Round with Welded Base & Flat Follower 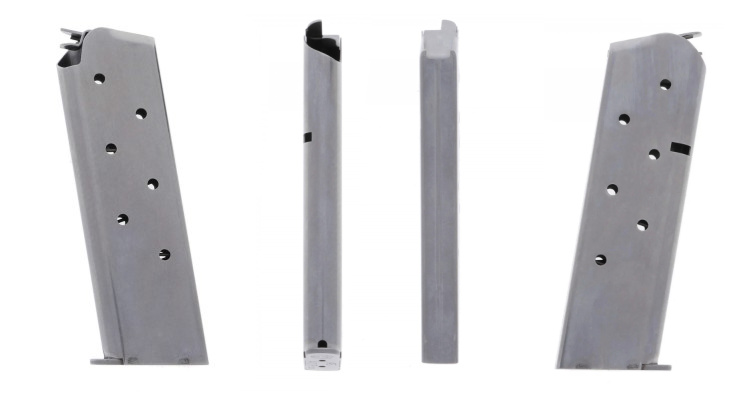 Featuring stainless steel construction with a welded, flush-fitting base and a classic flat follower, these Metalform magazines deliver refined quality and maximum reliability.

7. Metalform Stainless Steel 7-Round with Welded Base & Round Follower 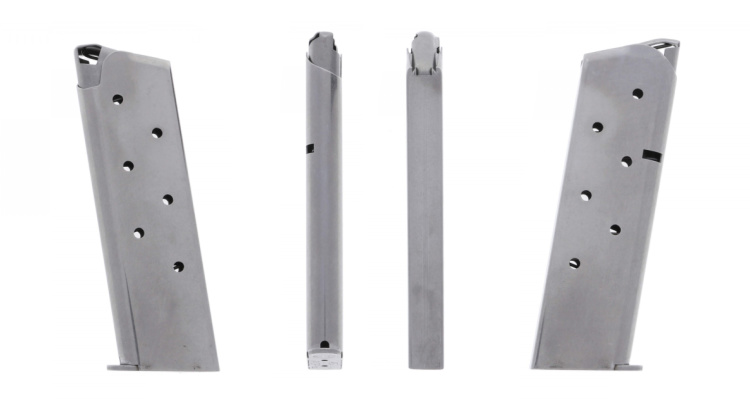 1911 Government Commander 45 ACP Stainless Steel 7-round Metalform Magazine with Welded Base and Round Follower. 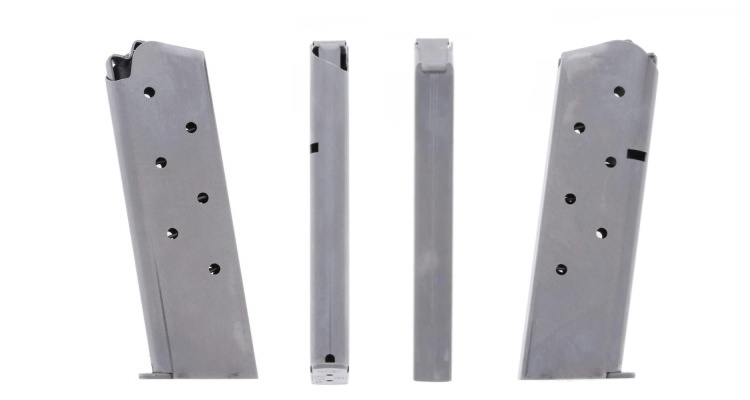 9. Metalform Standard Stainless Steel 7-Round with Removable Base & Round Follower 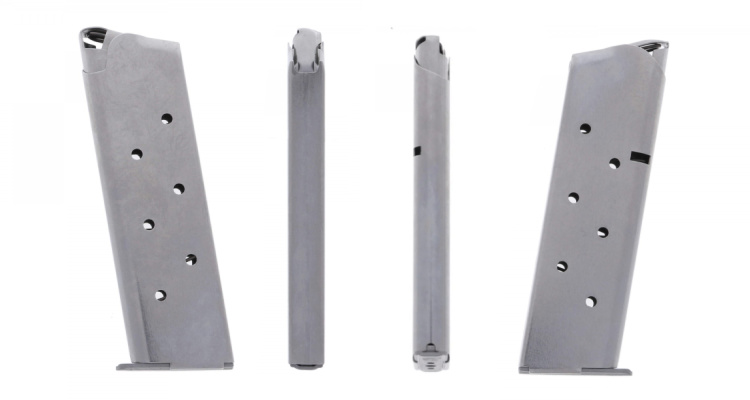 These magazines feature durable steel construction with wide-cut witness holes, removable base plate and a round follower for more consistent feeding.

Comment from William S.: “The Metalform 1911 7 shot stainless steel magazine with round follower and removable base plate is the top of the line, in my opinion, that is available.”

8-Round Metalform Magazines for Government 1911s in .45 ACP

We have two models of these 8-round mags, black and stainless steel. The polymer magazine baseplate is removable with the little flares to it so you can reach up, grab it, and rip it out of the magazine well for emergency manipulation, clear stoppages, etc. The edges of the follower are rounded just a little bit to give more reliable feeding. 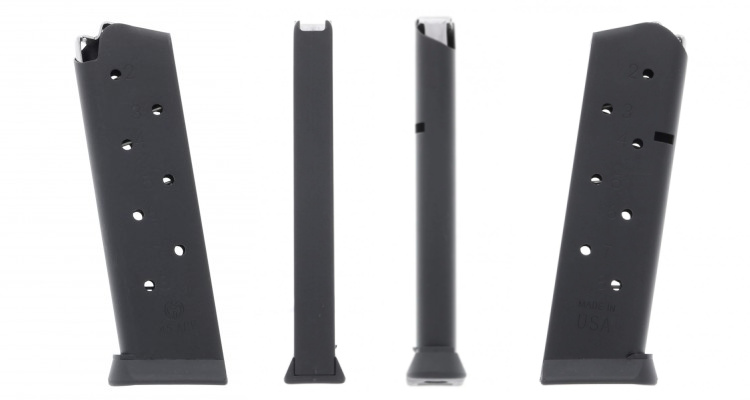 This Metalform 8-round magazine (SKU 45.746BN) is coated with black nitride coating (good for night ops) and comes with a removable base and Pro Flat Skirt Follower.

11. Metalform Stainless Steel 8-Round Magazine with Removable Base & Pro Follower 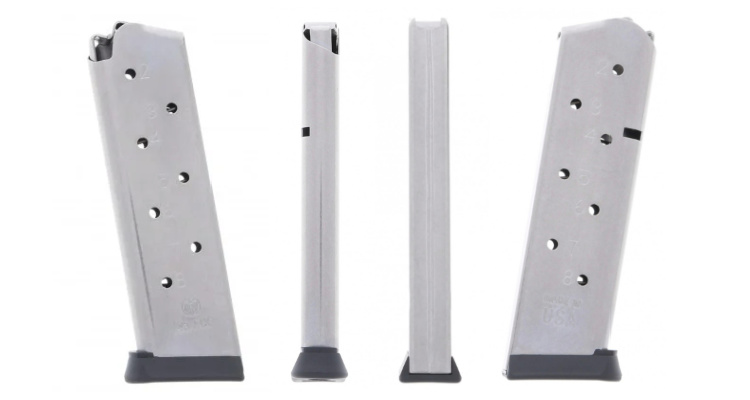 1911 Government .45 ACP stainless steel 8-round magazine with removable base plate and Pro Follower

See them up close in this video:

James B. says, “They came quickly and used them This last weekend. Worked totally great. No problems at all.”

12. Metalform Extended 10-Round Magazine with Welded Base & Round Follower 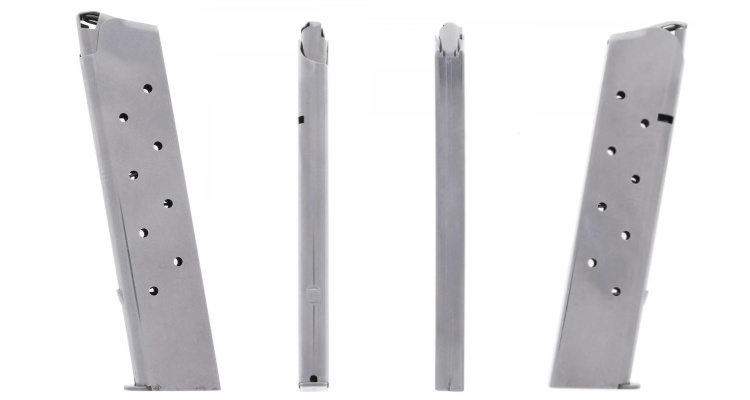 It’s not going to be as concealable but you’re getting a couple more rounds with this one.

Shopping for 1911 magazines can be confusing. Read this!