As 2016 winds to a close, many of us are trying to finish up our holiday shopping and planning for family that is coming into town for a visit. A lucky few of us have the time to slip quietly into the woods for some hunting. Me? Well, I am neck-deep in 2017 SHOT Show preparations.

For those that may have forgotten, the Shooting, Hunting, and Outdoor Trade Show is just a few weeks away. Companies are scrambling to get all of their new products ready to show and writers like me are trying to stay on top of all the press releases, rumors, and assignments that are flying left and right.

Based on the rumors and official announcements I am seeing and hearing, I’m detecting a number of things that might become influential trends that will start at the show and continue through the year. Keep in mind, these are opinions on where the industry may move based on the new guns and accessories I am seeing. I could be completely wrong on some — or even all — of these. I don’t think I am, however.

The 6.5 Creedmoor has been a popular niche cartridge for the past 9 years. In 2017, the cartridge turns 10, and it’s beginning to sound like the cartridge will get a lot of manufacturer support at this 2017 SHOT Show.

Here is a sampling of a few rifles that I hear will be adding the cartridge to its line:

Pistol caliber carbines have always been popular, and it seems that 9mm in the AR platform has become quite popular. Although other rounds like the .45 ACP and 10mm are also available, the 9mm cartridge is the clear winner in terms of product offerings.

In recent months, I have seen numerous product introductions in this niche from small start up companies to top tier manufacturers like Wilson Combat.

I expect we will see a number of new 9mm carbines at the 2017 SHOT Show. Right now, I know of three that I’ve been told will be introduced. The first is the Diamondback DB9R and the second is the new GMR-15 from JP Enterprises. The third is called the FM-9 and may prove to be the most interesting of the bunch. All of these will take Glock 9mm magazines.

There are also two other companies working on new products that should be ready to display at the 2017 SHOT Show. I can’t talk about them yet, but they should be well received by shooters.

The 10mm has been a popular niche round for decades. It offers a lot of power out of a handgun, making it a great pistol cartridge for hunting and competitions like bowling pin matches.

While I do not expect to see the round take over the handgun market, it does seem to be holding onto its popularity. Perhaps it is even gaining a little ground.

At least two companies will offer new pistols in the big cartridge next month. The first is from Coonan. Coonan is a company that originally captured the shooting community’s attention with a 1911-style pistol chambered in .357 Magnum. Those guns proved to be popular. Since then, the company added the .45 ACP to its catalog of pistols.

For 2017, Coonan will also add the 10mm as a chambering option in its guns. Fans of the company’s craftsmanship will be able to pick one of these up in the coming months. 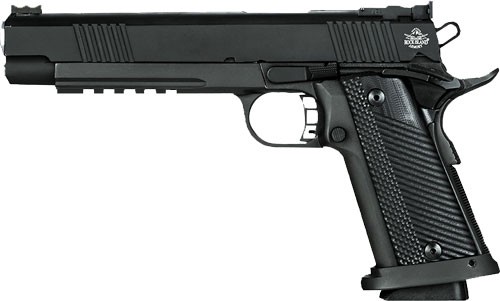 Armscor is also throwing more support behind the 10mm with several new pistols. Two of them are match guns with 6” barrels. A third gun is a smaller carry type gun with a 4.25” barrel. This pistol will not be the easiest to conceal, but it will make for a heck of an impression should you ever need to use it in self-defense.

I don’t want to overstate this. The .40 S&W cartridge appears to be on a decline in popularity, but it is not doomed, dead, or going away any time soon.

The .40 S&W was born from the cartridge war between the 9mm and .45 ACP. In the 1980s there were many police departments and shooters moving from wheel guns to semi-automatic pistols.

Compared to today, the self-defense ammunition was not terribly effective. Rounds like the Hydra-Shok and SilverTip were good for the time, but nowhere near as effective as today’s Gold Dot, HST, and PDX1. Consequently, caliber selection was much more relevant to the elusive concept of stopping power.

The FBI and other law enforcement agencies began looking at the 10mm as an alternative, but it presented problems of its own. Winchester and Smith & Wesson teamed up and developed the .40 S&W cartridge as an alternative to all of the existing rounds.

The .40 was seen as having nearly the effectiveness of a .45 ACP, but with guns having capacities closer to the 9mm. It used the same diameter bullet as the 10mm, but with less pressure and recoil. It seemed like the best of all worlds, and police departments and shooters took to it extremely quickly.

Fast forward to the 21st century and several things have happened. First, ammunition effectiveness has increased to the point that there appears to be little difference in the wounding ability of the .40 S&W when compared to the 9mm.

Secondly, concealed carry is vastly more popular today than it was when the .40 S&W was introduced. Considering that the .40 S&W tends to have more recoil than 9mm in small guns, and 9mm handguns tend to be able to carry more rounds, many people tend to opt for the 9mm when looking at small guns for concealed carry.

For the above reasons, numerous law enforcement agencies have transitioned away from the .40 S&W cartridge — mostly to the 9mm.

I expect we will see the .40 S&W continue to be introduced as an option in new handgun lines, though I expect it may become a secondary cartridge for release.

Clearly the .40 S&W is not a priority for these companies, but I don’t think we will see the cartridge abandoned completely any time soon.

Sound off in the comments if you have any thoughts on what we’re going to see. Give us some idea what sort of longer term trends you think might develop. We can use that to owner about the 2018 show before 2017’s is even behind us. Maybe we can really do some prognostication and predict what SHOT Show 2022 will bring us…or maybe not.

Regardless, tell us what you think.