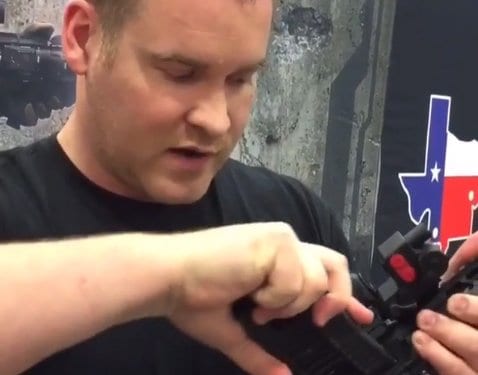 Most of us know tha California has some silly laws and regardless of how we feel about them, do not forget that there are people who live there and are desperately trying to stay legal while still enjoying their limited 2nd Amendment rights. Politics aside, they do not have the means to change the laws nor leave so they are stuck where they are.

So in Califonia, to remain legal with an AR-15 they have to eliminate features that would categorize their rifles as dangerous weapons. This means silly things like pistol grip removal or using aftermarket parts to so you cannot wrap your thumb around the pistol grip. Another way to make your scary black gun not so scary is if your magazine is fixed.

Now there way this works is that the 10 round magazine cannot be removed from the gun without tools. That is where the bullet button came into being. It solved that issue since using an object to remove the magazine constitutes using a tool. Well California is banning that as well, for now. So in a typical banned fashion, your AR has a fixed 10 rd magazine. In order to reload the magazine, you would have to basically disassemble your rifle. This means popping the rear take down pin and opeing the upper receiver like the hood of a car. Now the top of the magazine is exposed and you can reload the magazine. Close the hood, pop the pin back in and you are good to go. That is a lot of work to reload the magazine. Some companies have come up with bandaid solutions to make that process faster but Lantac has a better solution.

They are coming up with a reloading device that will allow you to load 10 rounds into the fixed magazine with their reloading tool.

As you can see from the video above, it is a simple single stack device that allows you to push rounds into the gun via the ejection port. No word yet on price or availability.