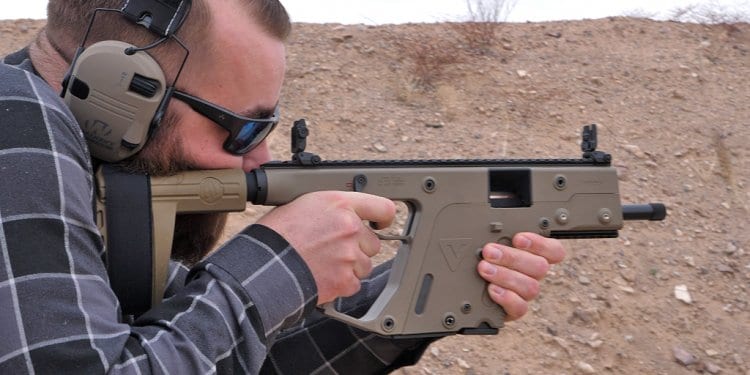 The Kriss Vector is easily one of the most advanced submachinegun design on the market. The problem is that its main advantage (low felt recoil during full-auto shooting) is effectively lost on the semi-auto version.  This doesn’t seem to stop many of its admirers – after all, the design is cool and performance very good — and it continues to be extremely popular even in the “non-NFA” world. Kriss has been doing an excellent job at listening to consumer demand, releasing the Vector is varying sizes, calibers, and configurations. The latest (and the most appealing to me) is the Kriss Vector 22 LR. There is a big resurgence in 22 LR at this year’s SHOT Show, and Kriss is without a doubt the place where I  had the most fun at range day.

This weapon uses proprietary magazines rather than what someone might expect, like perhaps Glock 44 magazines. This seems to suck at first, but upon reflection, Kriss has the right idea. It’s being released with 10 round proprietary magazines, which would hardly be my preference, but what doesn’t suck is the 30 round magazines coming soon. If they went with a Glock 44 magazine it would be unlikely we’d see a 30 round magazine anytime soon.

On the range shooting the 22 LR Vector during SHOT Show 2020.

The Kriss Vector in 22 LR was a popular gun at Range Day and anyone who shoots a lot of 22 knows they get nice and dirty quite fast. The small caliber Vector still ran though, even after dozens of shooters and an untold amount of 22 LR went through it. The Kriss Vector 22 LR is coming in both pistol and rifle variants. The rifle variants come with a 6 position M4 style stock and an M-Lok rail system; the pistol variant will feature an SB tactical folding brace.

The worst part about a lot of “real” guns later chambered in 22 LR is when they suffer degradation in manufacture — as though companies feel they can build the gun more cheaply due to the little caliber. Such weapons feel like plastic clamshells wrapped around 22 LR rifles. That wasn’t the case here. The Kriss Vector just felt like a Kriss Vector. It had the same quality, same ergonomics, and the same design overall. It’s just in a smaller caliber. The trigger was excellent, a little stiff, but short with a short reset.

It was a ton of fun to shoot, and it’s coming in various colors…and let’s be real. The snow camo model is by far the sharpest model out there. It gives them Storm Trooper vibes y’all.

22 Caliber: we talk about other guns chambered in .22lr too 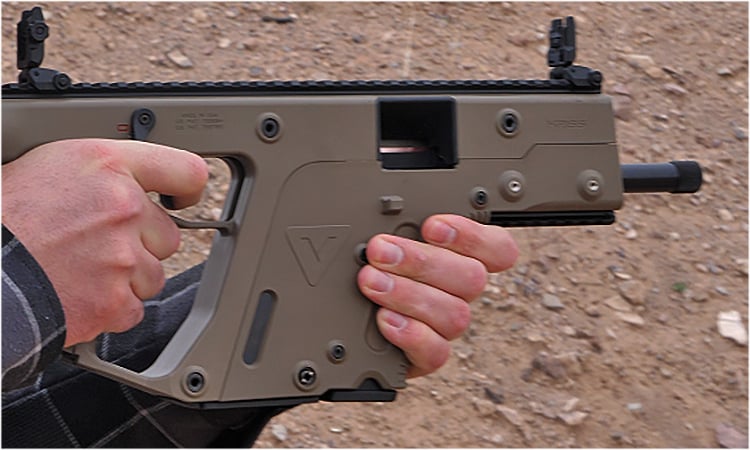 The .22LR Vector uses proprietary magazines instead of Glock 44 mags, but that’s not necessarily a Bad Thing; it makes it far more likely we’ll see a 30-round magazine soon.