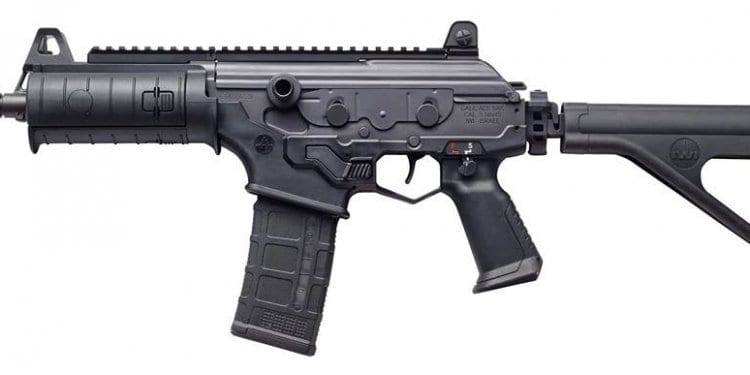 IWI US announced that the company is now shipping its Galil ACE pistol with a folding arm brace.

This pistol traces its roots back to the near-legendary Galil rifle developed by Israel Military Industries in the 1960’s. IMI would eventually become IWI. Modernized with a number of features not found on the original Galil rifles, these pistols are chambered in 5.56 NATO and take standard AR-style magazines.

IWI US built this gun with a relatively short 8.3” barrel. While that will undoubtedly bleed off a significant amount of velocity, it allows the gun to be more easily fired as a traditional pistol. Additionally, with the folding arm brace, shooters with a disability or poor upper body strength can take advantage of the pistol stabilization brace to gain more control over the gun.

The stabilization brace folds to reduce the overall length of the gun when it is stored. With the BATFE officially recognizing that pistol braces can be shouldered without altering the objective nature of the pistol, this could make the gun a good choice for a survival weapon stored in a pack in your plane or 4WD.

Even though it packs small, the gun does have a bit of heft to it. Unloaded, it weighs about 7.6 pounds. This could come as a surprise to shooters not familiar with the system.

Another reason why the gun may seem heavy for its size is that the gun has a milled steel receiver. Milled steel, as you might imagine, can add a great deal of durability to the weapon. Durability and reliability are prized by IWI as the company has extensive battlefield experience with its weapon systems. However, for someone used to the aluminum bodies of an AR, the Galil ACE might be a bit heavier than they might like.

As I mentioned, the gun has a 8.3” barrel. The barrel is cold hammer forged and made of CrMoV steel. It is chrome lined and has a 1:7” twist. On the left side of the gun is a reciprocating charging handle.

IWI US includes sights with this gun. While that might seem like an odd thing to mention, many modern rifles and pistols ship without any sights. That’s not the case with this handgun. A tritium front post and a rear aperture sight with two tritium dots are standard on this gun. So, right out of the box, you are ready to get to shooting.

Quality is rarely inexpensive, and the Galil ACE is not a cheap gun. The suggested retail price is $1,849. I’ve got a request in for a test gun, and I hope to have a review on this pistol for you in the coming weeks. It looks like a winner to me, and I have high expectations for it.