Bullpup rifles are amazing things. They take a full-size auto-loading rifle, reconfigure the components, add a few pieces and, “poof!” the rifle is 30% smaller!

Yes, there are downsides to the design, but ultimately, bullpups are simply handier versions of full-size firearms that don’t sacrifice ballistic efficacy to achieve compactness.

One of the most popular bullpups in the US, is the IWI Tavor series of firearms. These polymer-shelled, piston-driven magazine-fed carbines were designed with lessons learned from the Israeli Defense Force after decades of ground warfare.

While great guns in their own right, they’re limited to the intermediate calibers 5.56mm and .300 black….. Until now. 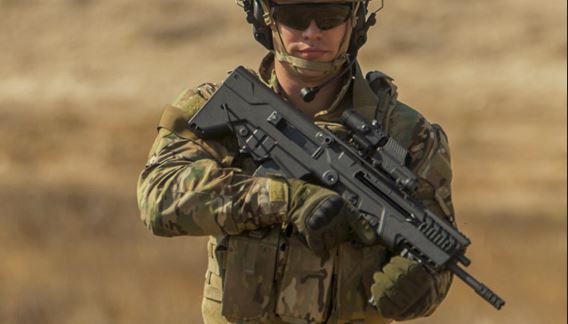 While rumors of the gun’s existence have circulated for years, only last week did IWI confirm these rumors. IWI’s CEO Shlomi Sabag wrote, “We are pleased to expand the TAVOR family – the world’s most popular battle-proven bullpup rifles – with the new addition of a 7.62X51mm caliber weapon, based on requests from our customers. The IWI TAVOR 7 enables users from the military and law enforcement markets to operate in a wide variety of scenarios at short and medium range with enhanced firepower – efficiently, safely and easily, with only minimal maintenance.”

In a nutshell, IWI is telling us that their new rifle takes the best parts of the original Tavor – namely reliability, compact form, lightweight construction – and adds the impressive terminal ballistics of the .308 round.

Also, according to the press release, the Tavor 7 also incorporates the X95’s grip system, allowing users to swap out their grip modules at will. Additionally, the new big-bore Tavor will be available in two barrel lengths – 17 inches and 20inches, and in four colors: Black, OD Green FDE, and Sniper Grey.

There are a few things I didn’t see in the release, but are worth mentioning. For example, leaked images shown in the past, appear to show the new gun utilizing SR-25 magazines like the Magpul 308 PMAG.

Additionally, the gun features a 4-position gas selector allowing shooters to tailor the gun to run when severely fouled up or suppressed.

As for price and availability, the Tavor 7 should be available first quarter 2018, but no price has been announced. Still, I would be surprised if the gun retailed for less than $1,800, with street prices presumably lower.