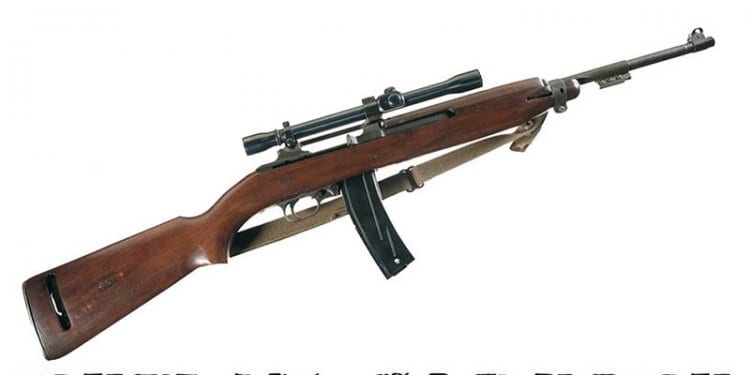 Inland Manufacturing was a division of General Motors that was originally started to produce wood-wrapped steering wheels for various GM vehicles.

When World War 2 started, GM converted the factory at Inland to produce M-1 carbines for the American Military, eventually churning out over two million examples.

After the war, Inland Mfg. returned to producing GM civilian products, but by 1989 had merged with other GM companies and became part of the Delphi Automotive Systems and leaving GM entirely in 1999.

A few years later, a small company in Ohio purchased the name, and started producing World War II-era firearms like the 1911 and the M1 carbine.

The latest product addition to their lineup, is a reproduction of the T-3 carbine, the T-30.

The original T-3 carbines were issued at the end of World War 2, and while some included a scope like the reproduction Hi-Lux included with the new Inland, they’re most well-known for being issued with a massive infrared night scope and equally enormous battery backpack.

According to the press release, the new T-30 was developed in response to buyers wanting an easy way to mount optics on their little Inland carbines – what’s cooler still, is that the new T-30 has a threaded muzzle – perfect for adding a sound suppressor.

This also means tactical shooters can attach a World War 2-style conical flash hider to their modern weapons, very cool. Look for more info on the new carbine next week when Inland Mfg. unveils all the details at SHOT Show 2017.