What training with the IDF taught me about automatic fire 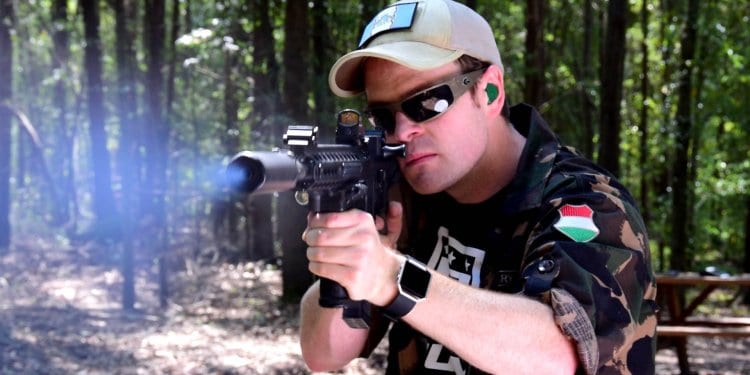 While traveling home from Altair Training Solutions out in Immokalee, Florida, I had a chance to go through the ultra-dense notes I took while training with the Israeli Defense Force. CAA in conjunction with IDF-legend, Lt. Colonel Mike Hartman and a handful of IDF counter-terrorist trainers took a select group of writers out to train them how to train others on IDF methodologies of gunfighting.

Most of the writers present had served in the military in some capacity with at least the exception of myself. All of us had some professional training, but despite this, all the writers came with an ‘empty cup’, ready to fill with knowledge.  And learn we did.

In fact, there’s enough information taught in the short three days of class to spend days or weeks covering, so I’m going to concentrate on two areas that I feel most shooters would be surprised by, interested in and able to apply to their personal defense plans: automatic fire.

Currently, the IDF issues two different firearms to the bulk of their infantry forces – the IWI Micro Tavor and the M16/M4 carbine. In both these cases, the IDF only utilizes these guns on semi-automatic in all but the direst circumstances.

If you’re scratching your head, wondering why a nation literally surrounded by hostile neighbors wouldn’t employ as much firepower as possible, as quickly as possible, it’s important to understand something crucial and uniquely Israeli. The IDF must function like a well-armed law enforcement unit when deployed domestically, and like an occupational force when in the territories.

In the former, because they’re surrounded by civilians and non-hostiles, so leveling a structure or utilizing long bursts of automatic fire can simply pose too great a threat to nearby non-combatants. The latter because despite legally capturing these regions from neighbors in the wake of the 6-day war, these bordering countries till view the land as theirs. Any settlements built in the area will be subject to mortar strikes, incursions from guerilla/terrorist units or simple harassment from natives.

This isn’t dissimilar to how the US military had to shift their SOP after the initial invasion of Iraq/Afghanistan when they became an occupational force rather than an invading one. This means operating more surgically. Unlike the US, the IDF has had to deal with well-armed, well-funded terrorist incursions for decades rather than the duration of a single conflict.

So, while our military doctrine shifted to adopt to the changing battlefield, IDF doctrine was forged and honed for years with it in mind

Fair enough, but what does this have to do with the average shooter at home looking to defend his family, hearth and home from bad guys?

More than you think.

Even units of the IDF don’t utilize automatic fire when in close proximity to enemy combatants, they value precision over volume. This is an ideal mentality for armed citizens to adopt for home defense.

Just as the IDF don’t rely on volume of fire to neutralize assailants until melee range, so too should armed home-defenders stateside. Which is another reason why I’ll argue until I’m blue in the face, that a modern sporting rifle trumps a shotgun for home defense if collateral damage is of any concern.

So how should shooters integrate this into their home defense repertoire?

Simple. Train to be precise.

Learn to make shots on small targets in low light under stressful conditions. Take your home defense carbine or pistol of choice to the range, and do some jumping jacks and pushups until fatigue, but not failure. Now try to fire hammered pairs into your target.

It sucks, it’s incredibly difficult and it should scare the hell out of you.  Shooting under ideal conditions against static targets is a joke. If paper Bin Laden can best your training regiment, you need to train harder.

But at the same time be sobering honest with yourself about your abilities. If you know you can’t reliably hit a small, moving target under stress and you’re being bum-rushed by a knife-wielding attacker – adopt.

If that means butt-stroking your attacker with your rifle, do it.

If that means mag-dumping into the guy while backpedaling to safety – do it.

I’m not advising anyone break the law to eliminate a threat, but if your only alternative is death – do what you have to. The will to fight, to survive is the most important portion of self-defense. Tools and training are incredibly important, but if you lack the will to use either, then you might as well try to hug your attacker to death.