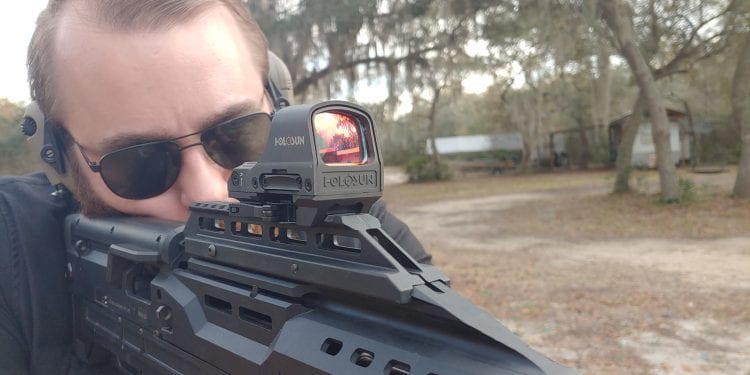 When it comes to red dot and reflex optics, I find the open square-style windows to be my overall preference. When I saw the HS510C, I took an immediate interest. The design, features, and prices begged me to pick it up. I was impossibly curious about what kind of quality I could expect from a red dot with a sub-350-dollar price tag.

The Holosun HS510C is a feature-filled optic. This little fellow has a side-loading battery compartment as well as a solar failsafe. The battery lasts for 50,000 hours on the medium setting. If the optic is unmolested for an extended period, the shake awake technology automatically shuts it off. When the optic is jostled, it fires back up and is ready for action. 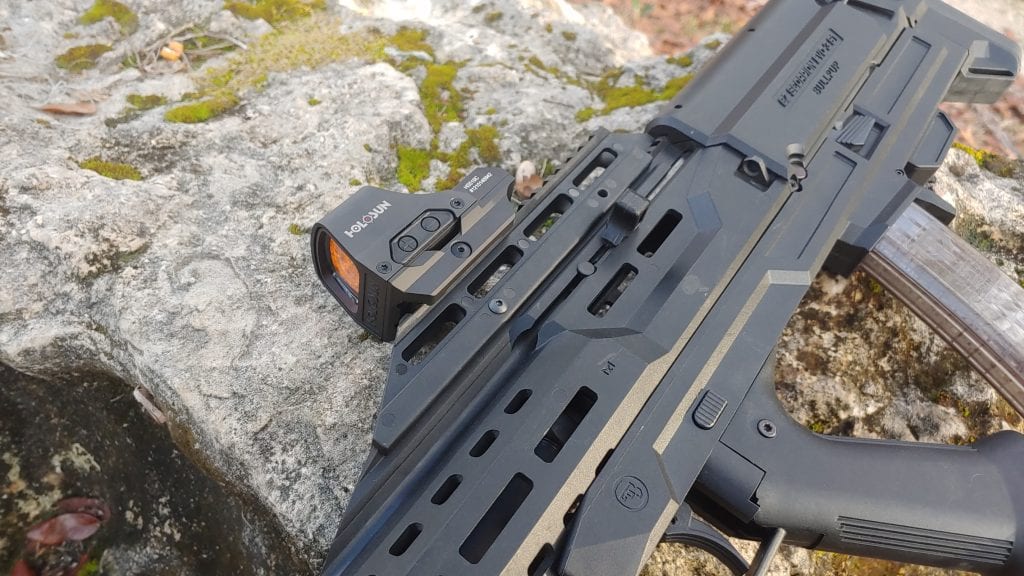 The HS510C is perfectly designed for modern rifles.

The HS510C features three reticles, a 2 MOA dot, a dot and 65 MOA circle, and a 65 MOA circle by itself. We’ll talk for literal paragraphs about these three later. Twelve total brightness settings occupy the HS510C, broken into ten daylight settings and 2-night vision settings.

The optic weighs 4.94 ounces and features an aluminum and titanium hood for durability and weight savings. The window is .91 inches tall and 1.26 inches wide. If you want an absolute co-witness, then the HS510C provides that.

Hitting the field, I equipped the HS510C to my Bullpup Scorpion. I figured the Bullpup was space-age enough to warrant a space-age looking optic. We know an optic works with a battery, but I wanted to test how well the solar panel worked, so I left the battery tray empty. 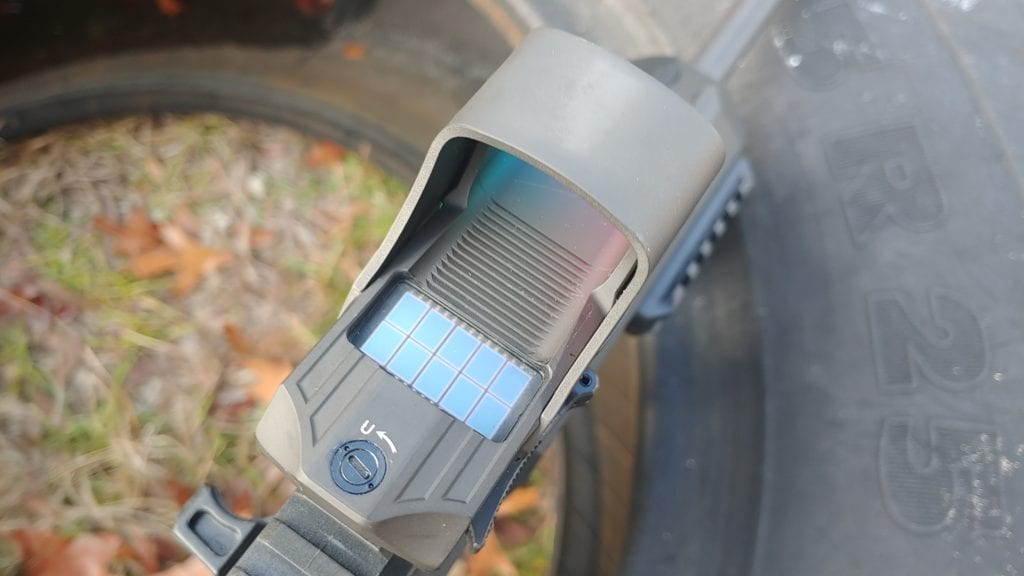 It’s all about that solar panel.

Admittedly as I turned the optic on, I got a low battery indicator. Throughout testing, this indicator came on every time; clouds blocked the sun a bit. The reticle never died during my initial testing, and it merely blinked occasionally to let me know what was what.

I was doing a bit more shooting and left the HS510C in the sun for a bit as I worked with other firearms. When I returned to the HS510C and Scorpion, the battery had received a decent charge because the battery indicator didn’t flicker the rest of the day.

Zeroing was a hassle, mostly because my model came maxed out to the left. It took forever to get on paper, but once I figured it out, everything went normal. I zeroed at 25 yards and confirmed at 50 and then 100 yards.

Remember when I mentioned we’d have paragraphs and paragraphs worth of information on the reticles? Well, we have reached that portion of the review.

The 65 MOA circle and dot reticle are convenient for several reasons, including longer-range engagements.

100 Yards with a 9mm is a bit of a challenge. It’s about a foot of drop at this range. I used the reticle to compensate for the range and decently estimate the drop. 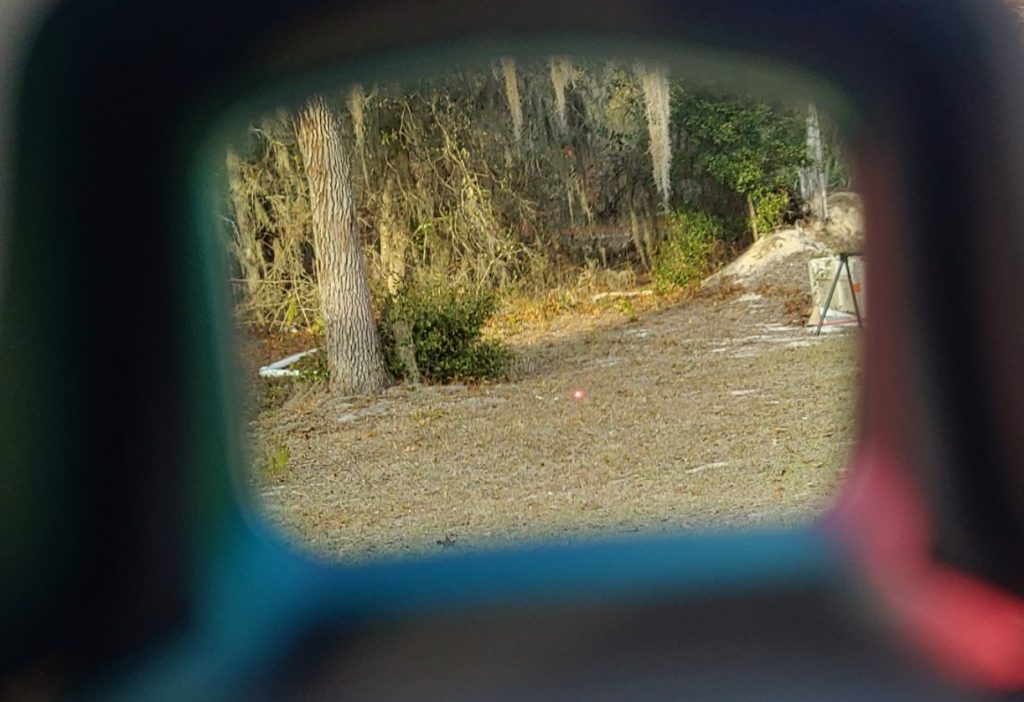 The small 2 MOA dot is a battery sipper that’s precise.

I placed the dot at the head level of a VTAC target and knew the round would land between that dot and the bottom of the reticle. This quick adjustment allowed me to land several successful shots into the bad guy’s upper torso. It turns out 9mm causes some significant heartburn when placed appropriately. 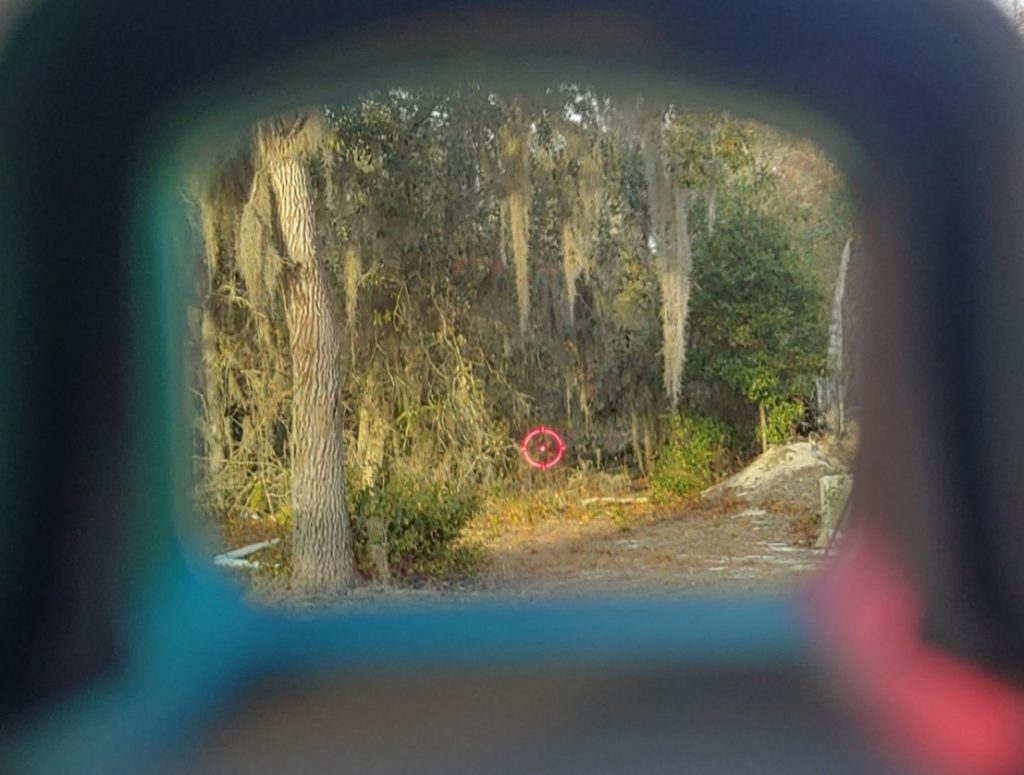 The bigger reticle is more versatile.

You can also use the reticle for range finding. The size of the circle is picked on purpose. 65 MOA wasn’t a random number they chose. At 100 yards, the 65 MOA circle equals the average height of a man. If a man-sized target fills the circle, it’s at roughly one hundred yards.

At super-close ranges, we know we run into mechanical offset, and our rounds will hit low. The 65 MOA reticle allows us to use the bottom stadia as an aiming point to compensate for this offset. Russian hostage negotiations involve a body bag for the hostage and hostage-taker, but you won’t need to do it Russian-style since you can make super precise close-range shots.

What about the other two reticles?

If you find the optic too crowded, then swap to the 2 MOA red dot. The 65 MOA circle only is an excellent close-range combat option. Fill the circle with the bad guy and pull the trigger until the bad guy is no more. The dot is just a more refined option for longer range shooting.

Through the Lens of the HS510C

The HS510C presents a crystal clear reticle in the circle and circle-and-dot combination. The dot alone actually washes out a bit at higher brightness levels. Speaking of, this thing can get punishingly bright. Brighter than I’ll need it even in the high noon of Florida.

The Buttons are responsive, but right handed friendly.

Also, there is a very light tint—very slight. I’ve noticed various blue, amber, and purple hues among optics like the Meprolight Foresight, The Bushnell TRS 25, and SIG Romeo series. Compared to these optics, the Holosun provides a clearer picture overall.

Ammo is tight right now, so my testing requires me to be smart. I’m testing the HS510C and some various Scorpion magazines, so all of my shooting was through the Scorpion. It ate through 300 rounds of 9mm in total. A blowback operated gun creates more recoil than a 5.56 on average, so I think it’s a fair enough platform to use. Throughout this testing, the optic never flickered or failed like a light in a shady gas station.

Next, I dropped it from shoulder height from several different angles. I dropped it a dozen times and tossed it back on the Scorpion. I used a little fingernail polish to mark the area so the zero would be as close to true as possible. The optic snapped back on, and I went at it again. The ding, ding, ding of my steel target informed me the optic held zero. 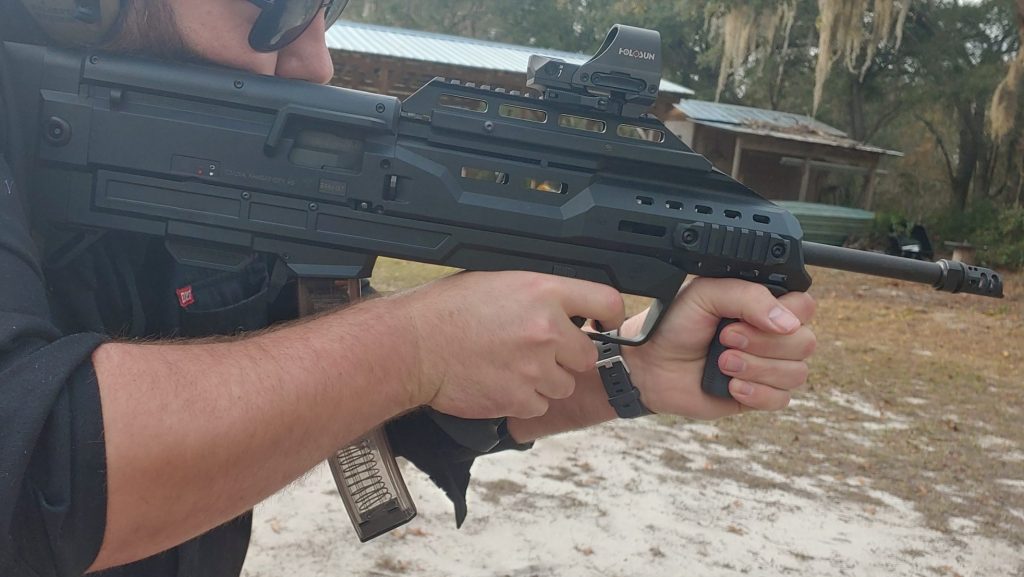 The HS510C is a capable optic for rifles and shotguns.

The weight of the gun makes it different from a stress standpoint. So I gave it three drops, one on each side and one from the top with the optic hitting first. I dusted off the gun, loaded a magazine, and went at it. Again, the optic held zero, and steel was rung. 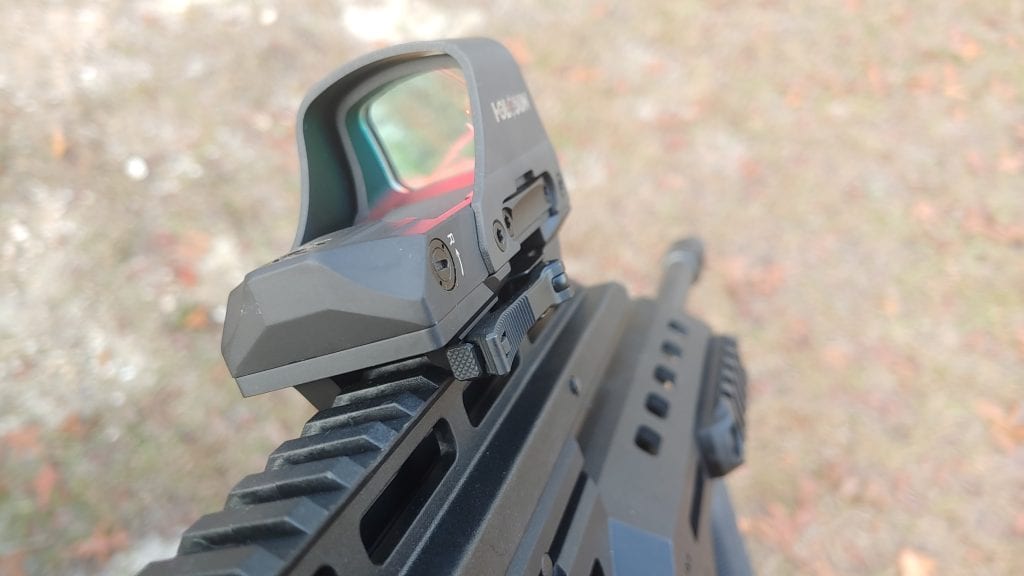 The HS510C can seemingly take a good beating.

The HS510C is an excellent optic at a relatively low price. Holosun has produced a professional-grade optic at a hobbyist price point. If you are looking to make your lead delivery system more effective, efficient, and precise, then the HS510C is for you.