What do you do when you own a bunch of foam dart blasters that need a place to live but have limited storage space? You create a space where one didn’t formerly exist. My parents had been on my case forever to clean up my room (sound familiar, guys?) and find a place — any place — to store the ever-growing collection of foam flinging dart guns I had accumulated through birthdays, a few purchases, and Christmases over the past several years. It was finally time to solve this little problem.

As it was, all of them were scattered all around my bedroom floor, the basement, and sights of most of the foam battles. The challenge was to organize them in a way that I could know what I had, pair them with the correct darts for each style, and grab them quickly in case of a spontaneous Nerf war with my dad or friends.

I knew I didn’t have existing storage such as a dresser, closet space, or a bin large enough to hold my foam arsenal, so I had to conjure up another solution. Barring any other obvious solution, I needed to get a bit creative and figure out how to store them in an unconventional way. I liked having the ability to see all of my blasters in one centralized location, but I didn’t know how to execute it. I would love to show them all off. I have been growing my collection for over six years now, starting from back in the old days of Nstrike (Nerf brand), through the more modern blasters, and it’s gotten truly enormous. Over 30 blasters and still growing. So I looked around my room for the place to post them up. 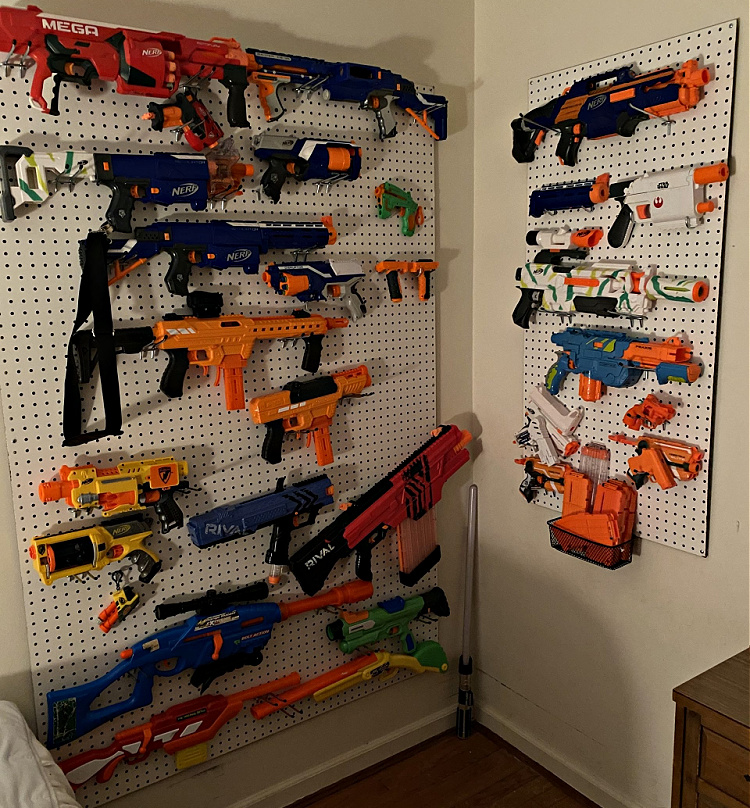 Finding a place is one of the first things I needed to do. After all, there would not be a project if there was not a place. So I looked all around my room and finally decided to use the corner to the left of my door because it would have the most free space — except there were a couple of problems I had to overcome before the project started. First, it was right where my dog’s kennel was. I had had my dogs for at least two years, and they were ready to leave the kennel life. They only stayed in it at night anyway. Second, that was where I had my blasters. I had piled all of my blasters on top of the kennel because I had no other place to put them. So I had to clear the area.

I had to dispose of the kennel and my blasters from the corner to make room for this new monster board I had in my head. The first thing I had to deal with was all of my dart guns. I set the on the bed, emptied the dog kennel of the blankets and food bowl, took it apart, and stashed it in the corner of the basement. After it was all done the corner looked really empty. The kennel had been there for over 2 years along with my blasters, and I had gotten used to them being there. But it was time to move on. 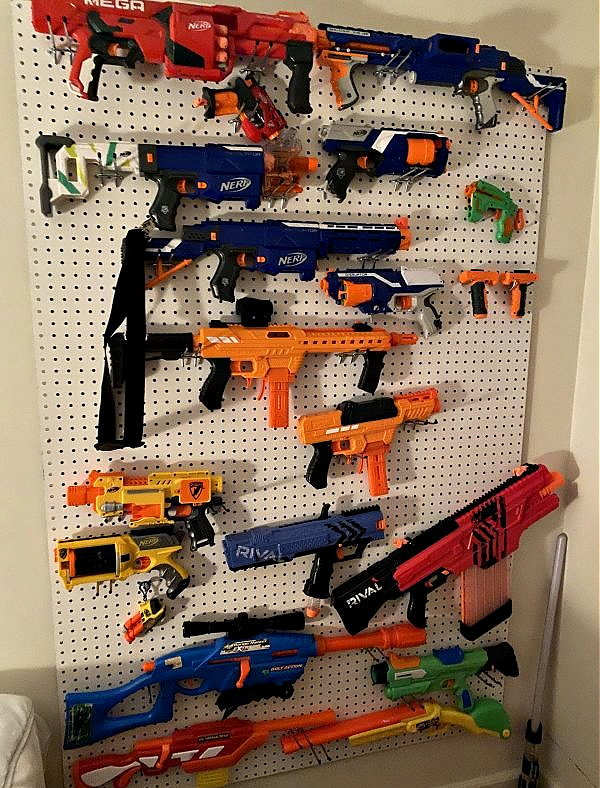 Next, I went on the measurements. I started by measuring the height, then the width. I did this for both of the corner walls, making sure to leave some room on the ends to make sure both would fit. I made a diagram of all my blasters and where they would go to make sure they would all fit with room left over for future blasters. It would be really bad if some of them didn’t fit. According to my calculations, they would. Since I don’t keep hardware around the house, I had to go to Home Depot to get everything I needed. So off we went to get all that was necessary for the project: two pegboards of differing sizes, screws to hold them to the wall, and pegs to hang the blasters.

I walked around the store for a bit and after a while searching found the pegboard I wanted. It was a whiteboard that was 8 feet by 4 feet. The nice worker took it down for me and cut it into two pieces, one 6 feet by 4 feet and the other 4 feet by 2 feet. He also smoothed the edges. He showed us the pegs and screws that would work for it and the spacers to keep the boards from sitting flush on the walls. They needed to be slightly off the wall so that the pegs would go in properly and hold the blasters on the board.

Putting it All Together

I went home and began the assembly. I made the spots on the wall where the screws and spacers would go in. Next, I put the spacers behind the pegboard. Then I screwed in the screws in the predetermined spots. After all of that, came the best part of this kind of project: putting all the blasters on. I put all the dart guns on and remembered I had more pegboard than blasters, leaving me space for more. I knew that extra space would get filled quickly, which it did. Within a month, all the extra space was full. 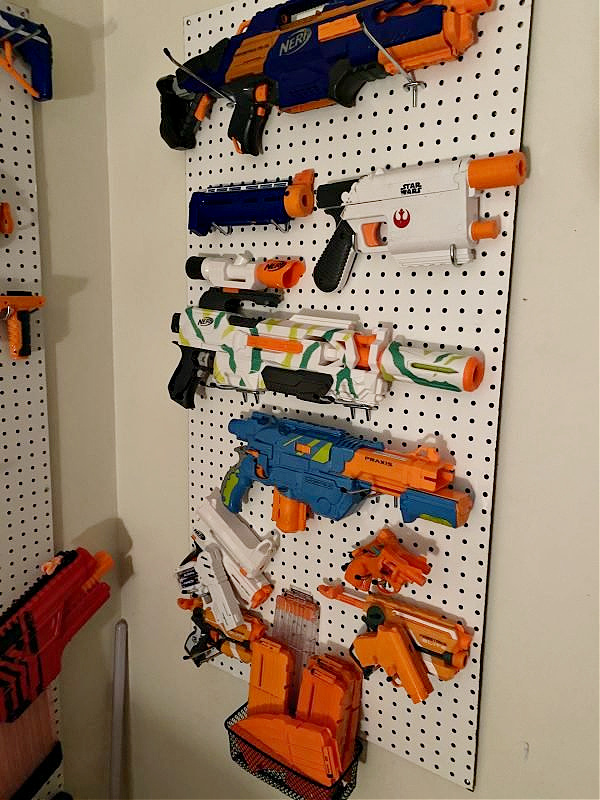 Overall, I’m very happy with the finished product. It does everything I wanted it set out to do, and more. Everything fit with room for future blasters. This type of project is definitely worth the work. It is very rewarding to look at all of your dart guns together, and I would definitely recommend this to anyone with nerf blasters and even for the airsoft fans out there. It’s a great way to show off your blaster to your friends and family. So in conclusion, I would give this project a 10/10.

If your kids are looking for a way to organize their dart gun collection, consider this DIY project. It’s something you could work on together. Even though I did most of the work myself, my mom and dad came in handy a few times.