Do you need a good set of boots to wear to the shooting range? Of course you do, unless you go there barefoot—which is an activity that I’d advise against. Read on and learn about these Irish Setter Vaprtrek boots, your feet will thank you for it!

I recently had the opportunity to test out a pair of boots from Irish Setter, and I’m excited to share my findings with you. The company has updated the Vaprtrek line of boots with various improvements. From what I gather, Irish Setter has been listening to customer feedback and wanted to improve the boot design to better meet customers’ needs. Let’s see how they perform these days.

I’ll admit, the first thing that tipped me off on these boots was their appearance. They look cool and interesting. Irish Setter describes the finish as “Earth Field Camo” and their intention was to have a camo pattern that went with everything out there on the market.  I’d describe it as a sort of “brindle” color like you might see on a dog’s coat. It’s not an obnoxious, stark camo pattern, but rather a blended, subtle pattern that doesn’t scream at you. Overall, I like it. You can wear these Irish Setter Vaprtrek boots anywhere and they don’t stand out as “hunting” boots.

Aside from all of that, out in the field, this pattern should blend into most terrain well enough. I think the photos bear that out very well.

Are these boots just for the shooting range?

No, of course not, but they really work great there. They offer outstanding support and traction. And if you’re running and gunning, you want the best non-slip traction that you can get, and these boots are excellent in that category.

They’re also great for the woods, especially if you’re moving over a lot of rocks and rough terrain.

Not only do they give good traction, but the support that they give to the ankles is extraordinary; those stiff leather uppers really help. The padding in those uppers and in the sides of the boot also goes a long way in protecting the ankles and lower legs. Tough outer leather, combined with padding, is a winning ticket here. So for rough hiking, these boots shine.

The soles of the Vaprtrek boots are not exactly soft, they’re on the harder side, so if you happen to be walking on hard floors, they make a little bit of a clicking sound. Just an observation, not the end of the world.

The upper is eight inches high, so they go up high enough to offer real protection well above the wearer’s ankles. I strongly prefer boots with high-top boots for these reasons. As such, these are really appealing.

They are not overly heavy or burdensome, either. Granted, these aren’t the most lightweight boots on the market, but for stout, leather boots they do pretty well in this category. I didn’t find them to be a burden while I wore them. The protection they provided to my feet/ankles versus the weight was quite reasonable. To be honest, it’s amazing that they are as light as they are, given their robust construction.

Another material in the boot is RPM, a composite material that reduces the weight of the boot, adding endurance and comfort.

They also describe Energ, which is added strategically, “Delivering a recharging burst of energy with every step.” All that aside, I do have to say that the insole of the boot is seriously nice. It feels soft on the feet, yet seems to provide excellent support. A home run in this category, I must say. Incidentally, the footbeds are removable.

Irish Setter also uses Ultra Dry, which they describe as, “A moisture management lining with waterproof components.” It’s designed to keep your feet dry for extended periods. What else can I say, except that it works like a charm. The boots keep your feet 100% dry under all conditions unless you ford a stream in which the water spills up and over the top of your boots.

The traction provided by the soles is extraordinary. I walked on wet floors that, with my normal shoes, would have sent my arms flailing like a windmill as I tried to catch my balance. Not so with the Vaprtrek Boots; they provided the best traction of any boots that I’ve felt in a long time. For this reason, in particular, I recommend these boots for the shooting range. When you are working with live weapons, you cannot afford to slip and fall. Someone could get killed. 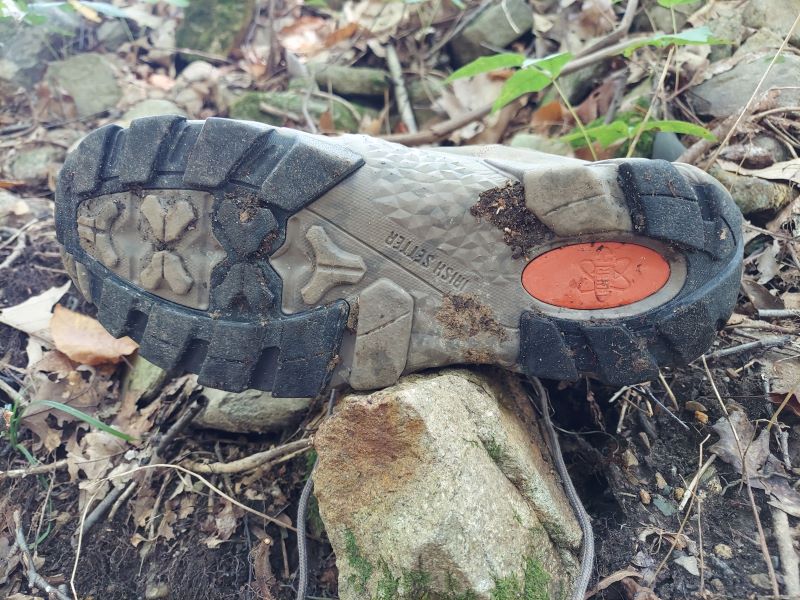 The soles of these boots minimize slipping, which can be vital for safety, especially when we’re working with weapons. Walking over rocks and other terrains while hiking proved that the Vaprtreks have great traction in the woods.

As we know, firing ranges and hunting grounds exposed to the weather can become very slippery. Especially during wintertime when ice can be a factor. Footwear that can negotiate those conditions is a real asset as well as a safety factor. The Vaprtrek Boots are up to the task.

A process called Scentban is used. It’s added to the leather, lining, and footbeds. It kills bacteria that cause foot odors. In full disclosure, I will tell you that I have horrific foot odor. It’s strong enough to bring a tear to a glass eye. Whatever they’re using to control odor in these boots, the stuff works because there has been no odor. It may be the Seventh Wonder Of The World.

One thing that bears special mention is the tongue of the boots. It utilizes “Cushin”, which is designed to minimize pressure on the shin. The waffle mesh padding makes a real difference, as the tongue is seriously comfortable. It’s enough of a positive aspect of this boot to mention it specifically. Aside from the walking comfort aspect, it also protects the front of the shin from impact. The designers really put some thought into this one.

I’ve been wearing these boots for a little while now and have been pleased so far with their performance. When I wear them, my feet, ankles, and shins feel protected and secure due to the padding. As well, the stiff support that they offer is appreciated, especially if I’m hiking in a place with unsure footing.

So far, the boots have held up well and seem to be very robust. Granted, I haven’t given them a brutal torture test as yet, but their durability looks promising.

I wish I’d had these boots when I was an active duty sniper, they’d have made my life a lot more pleasant. Retail for the Irish Setter Vaprtrek boots at the time of writing is $199.99. I think they’re worth it.