High-Rollers: Why are roller-delayed guns so pricey? 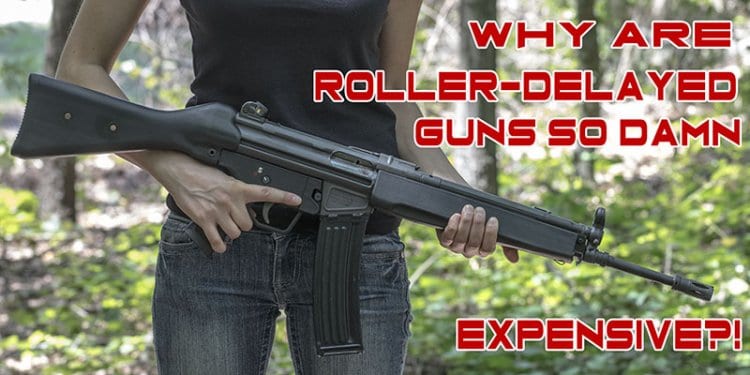 Roller-delayed guns were born from the frantic last moments of the Third Reich during the Second World War. At the time, the Wehrmacht was in desperate need of automatic weapons to arm the remnants of their once-vast military, in a last-ditch attempt to stop the flood of Soviet forces.

Bolt-action firearms and traditional locked-breech designs were considered far too expensive, as they used much more raw material and required longer to manufacture. Thus, German engineers attempted to find new, cheaper, faster methods of delaying the action on an automatic weapon. One of these prototypes was the MKb 42 Gerät 06. It utilized a modified version of the infamous MG-42’s short-recoil operation alongside a roller-delayed bolt carrier.

While this design was never produced in appreciable numbers, it lived on in the CETME program, and later in the HK G3 and MP5 designs we know today. But, given that the design was originally championed as an inexpensive alternative to traditional locked-breech designs, why then do these guns demand the premium they do today?

Well, unfortunately, only one company in America is dedicated to solely building roller-delayed firearms – Industries. Their firearms are pretty reasonably priced, with base models retailing around $1,000.

The reason those aren’t any cheaper, is that they don’t enjoy the same economy of scale as the AR-15. Simply put, the demand isn’t high enough for the PTR, to reduce its cost below the $1k mark. Fair enough, but then why do companies like Zenith and H&K charge huge premiums for guns utilizing the same internal operating method?

For H&K, their guns demand a premium because of both brand recognition, and because they are imported from Germany. Yes, their quality control is excellent, and the guns are very well made, but whether they are actually worth double or triple that of a PTR, is yet to be seen.

Zenith Firearms, appears to split the price difference between surplus and new production, presumably because they use a labor force that doesn’t demand the same premium as those found in Germany or America. Heck, Zenith even uses HK-licensed machines to build their HK-pattern firearms.

I also believe one reason that they demand such a premium, is that the methods that were once inexpensive to employ around the middle of the 20th century, are no longer so.

One thing is for certain, roller-delayed have a certain allure to them that makes them feel futuristic and exotic, some six decades after their invention. Plus, their reputation for reliability ensures that shooters will pay these prices happily, knowing they’re getting quality, reliable firearms.