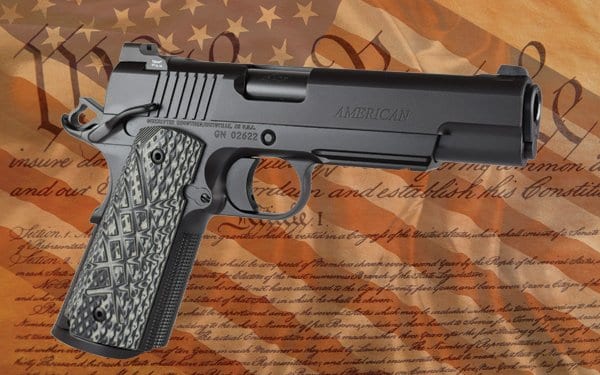 Guncrafter Industries – known for making .50 caliber 1911 pistols – stepped further into the smaller, faster world with the release of its new American pistols chambered for the 9mm cartridge.

Guncrafter already offers the No Name and Frag pistols in 9mm. However, the company states that demand for more 9mm handguns prompted the company to now make the American in the metric cartridge. Until now, the American was only available in the classic .45 ACP cartridge.

The American is a hand fit Government-size 1911 pistol with a light rail. These pistols are all made in Arkansas using bar stock tool steel components. Each gun is personally inspected and fired by the company president, Alex Zimmerman, before shipping.

Some of the standard features of the 9mm American pistols are:

Keep in mind that Guncrafter Industries is a custom shop, so they can handle any special requests you might have for your own pistol.

The American pistol ships with two magazines, which is enough to get you started with this gun. As I’ve mentioned before, the most common point of failure in a semi-automatic pistol is its magazines. Reliably running 9mm in a 1911 can be a bit tricky with poor quality magazines. Fortunately, Mec-Gar is one of the top magazine brands in the world, and it offers very good quality 9mm 1911 magazines here.

Guncrafter Industries is well known by many shooters as the company that makes the .50 GI pistols. Developed by Zimmerman, the .50 GI is a pistol cartridge that is a little thicker and shorter than the .45 ACP. The .50 GI offers impressive performance without punishing recoil. Guncrafter even offers conversion kits to transform your Glock 20 and 21 pistols into .50 GI shooting hand cannons.