As many gun enthusiasts know, SHOT Show 2017 was a huge success. There were a lot of new guns introduced, and the atmosphere was very positive.
I had the chance to wander the aisles and take a look at a lot of new gear. While I did not get a chance to see everything (that would require a second week), I did see a lot of interesting products. Here are four of the best new guns that were on display.

Like so many other people, I have been nervously waiting for Colt to bring back double-action revolvers. I say nervously because I knew that the new guns would not be the same as the original. Too many of the processes used in the old revolvers were labor-intensive. Even if the cost was not an issue, many of the craftsmen with the skills needed to reproduce them are long gone. I did not want to see new guns that were sloppily made.
SHOT Show 2017 was the first public showing of the new guns, and my initial impressions are very positive.
The double-action trigger on the gun was very smooth – on par with some of the better Smith & Wesson triggers. It was not a Python, but it was really good.
The front sight is designed for easy replacement with a drop-in assembly. The owner loosens a set screw at the muzzle and the sight will drop out of its machined pocket. A new sight can then be dropped right in. The guns will have a night sight option from the factory.
I’m looking forward to spending time with one of these on the range.

Typically, I do not find myself enamored with Taurus products. While I like some of the things the company has done, I’ve had too many bad experiences to feel comfortable with recommending its products. That may change.
The new Taurus Spectrum is a .380 ACP pistol that appears to be well-designed. If the gun proves itself on the range, it could be the new breakout hit for this caliber.
To start with, the Spectrum is the first Taurus gun designed by an American design team. Many of the engineers have an impressive background in firearm design with other major companies. So, the gun was designed by shooters with real experience in making guns.
There also appears to have been a change at the company in terms of who controls who. Some have speculated that marketing drove the design team. As was explained to me at the show, the engineers are in charge of the new Taurus.
I will be getting one of these guns for review after they start shipping in April. Stay tuned for more information on them then.

There were a lot of new 9mm carbines at SHOT Show 2017. Seriously — a lot.
One of the new rifles that caught my attention is the BNTI Arms 9mm carbine. Available in a variety of configurations including both pistol and 16″ carbine models, these guns run on Glock-pattern magazines.
Based on the AR-style weapon system, the BNTI Arms are not perfect copies of the standard AR-15. For example, these guns use a non-reciprocating side charging handle. The bolt will lock open on an empty magazine.
According to the rep I spoke with, these guns can be configured in a variety of ways. Barrel lengths start at 6.75″ and go to 16″. KeyMod handguards are available in lengths that match the barrel lengths.
One of the pistol models I examined was equipped with a Shockwave arm brace and a 10.5″ barrel. It was very well balanced. The finish was flawless and the match between the upper and lower was near perfect. Overall, it was one of the nicest AR-style 9mm guns I saw at the show.
The company made a number of other rifle announcements including a gun chambered for the 7.62×39. This was my first exposure to the company, and I have high expectations for them based on what I saw. 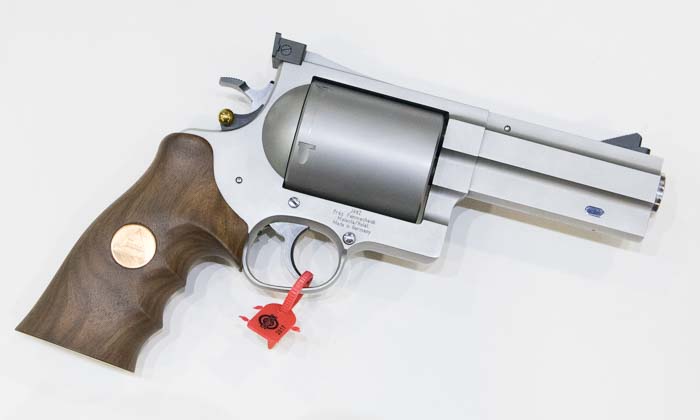 Janz is a high-end revolver maker out of Germany. The company was represented at the SHOT Show 2017 and had all of its wheel guns on display.
One of them that caught my eye was the MA-framed gun in .500 S&W Magnum. As the representative and I talked, he joked that the MA designation could easily be shorthand for “massive.”
Janz uses a double lock-up system for increased strength. To release the cylinder, you push a lever at the rear of the gun and a ball detent under the barrel. These unlock the cylinder allowing you to swing it out. Frankly, it sounds more complicated than it is.
Like the Colt Cobra I mentioned earlier, the front sight drops into a machined pocket and is held in place with a set screw. However, Janz takes it a step father. The front sight is under spring pressure. So you can adjust the elevation of the sight by adjusting this tension.
Janz ships the gun with a set of very nice wooden grips. The grips look great next to the bead blasted stainless finish on the guns. The guns are sold in a very nice presentation case.
If you are not familiar with Janz, the company used to provide parts for Korth. However, after business problems between the companies, Janz decided to develop its own revolver line. The MA-framed revolver is one of several guns in its line. The MA-framed gun is also available in .460 S&W Magnum.

There were a lot of great new guns at the SHOT Show this year. I look forward to testing some of them in the coming months. The NRA show isn’t too far off, and I would expect to see a few more new gun announcements then as well.