Gun control sucks, and what I can appreciate about the gun community is they almost always find a way to beat gun control laws in some way. Sure, it’s often a compromise, but we can usually beat gun control via innovation. This includes things like the Shockwave style firearms, 80% lowers, pistol braces, the Patriot pin, and the Ares SCR. The Ares SCR (later Fightlite SCR) is most famously a 50 state legal AR15.  It’s even legal (as of this writing anyway) in New York City of all places. This isn’t the only ‘featureless’ design out there, but it’s the one that looks the least like a failed abortion.

What the Hell is It?

The SCR I have is an old school Gen 1 model. Ares is now known as Fightlite, but mine was produced as a lower from Ares. Calling this gun a AR 15 is a bit of a stretch. It’s an Uncanny Valley variant of a AR 15. The weapon can use any AR 15 upper receiver, and it’s still a direct impingement gun. The most evident difference is the stock.

That’s a Remington shotgun stock fitted to a weird-looking AR 15 lower. This eliminates two standard features commonly listed in so-called “assault weapons” bans. Those being adjustable stocks and pistol grips. Other options have done so, but they are nowhere near as ergonomics or attractive as the SCR.

The gun still uses a buffer system, but it’s drastically different from the AR 15 style system, as is the bolt carrier group. The modified buffer comes from the fact you are using a Remington shotgun stock with a distinct downward angle. The buffer in internal and can’t be popped out easily like a standard buffer, and to use the buffer, you need the necessary Ares bolt carrier group. The buffer has a much smaller surface face than a standard AR 15 buffer, and it looks like a large Allen screw.

The Ares BCG is designed to work with this new buffer and is quite distinctive. You have to add your own bolt and firing pin to the BCG. This is annoying because these lower receivers cost over 400 bucks. You should be able to include a bolt, firing pin, and a bolt catch. Oh yeah, there is no bolt catch too, but more on that later. The BCG has a rat tail that angles and moves to coordinate with the internal buffer. The bolt is a standard AR caliber. 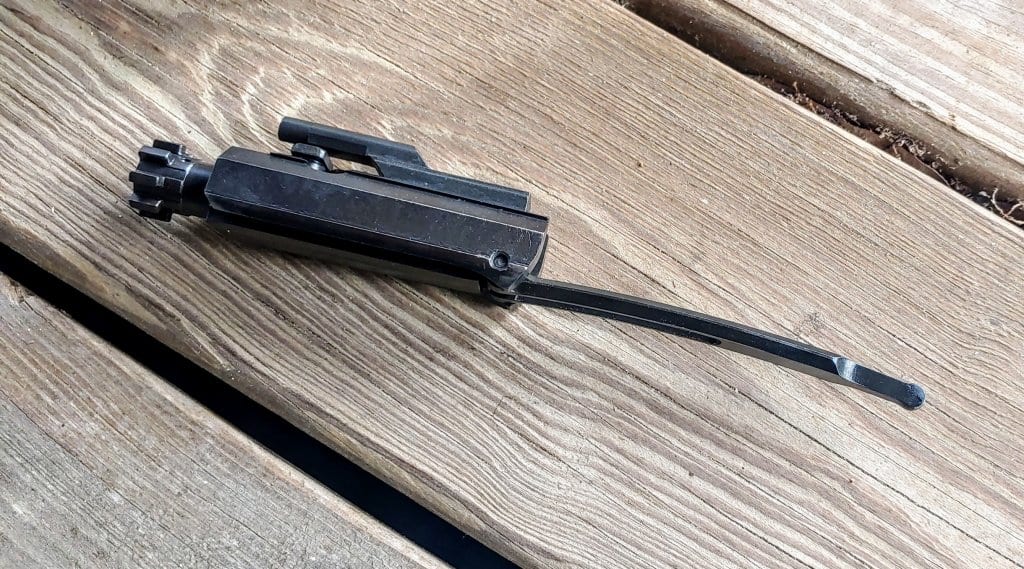 The rat tail has to align perfectly with the buffer, and this can make attaching the upper to the lower a bit difficult. Not impossible, or even frustrating, it just won’t snap on like a standard AR upper and lower.

Obviously, with a restrictive BCG and bolt system, you are limited in calibers. You can’t make a 9mm blowback-operated Ares SCR. You could do 300 Blackout, but you can’t do 22 LR.

The SCR came as a full rifle with an AWB compliant upper, and it came as a lower by itself. I don’t live in a state with harsh gun control (Yet.) I bought the lower because it was gathering dust in the back on my local gun store, long forgotten until one day it hit the shelf. We also got an Aero upper, a Ballistic advantage barrel, an Axelson Tactical muzzle device, and an STNGR RPTR rail.

I just wanted to knock that out before we go too far into the review.

The Ergonomics of the SCR

The AR 15 is an ergonomic masterpiece. The lower receiver is very well laid out and very ergonomic. The SCR is not so ergonomic. It does have some good points, so let’s talk about those first.

Changing the stock and pistol grip so drastically made everything a bit different. The safety is an 870 style cross-bolt design. It’s placed behind the trigger and quite simple to accentuate. It’s perfectly fine, just a bit of significant training change to use a cross-bolt on an AR.

The downside is that the placement of the stock makes it impossible to reach the magazine release with the trigger finger. You have to use your off-hand, and it’s still awkward, or install a left-handed magazine release to make it a bit better. Also, Ares/Fightlite didn’t install a bolt hold open. The bolt catch is proprietary and costs 40 bucks. You can buy and install your own, but your 450 dollar lower receiver doesn’t come with one.

The charging handle is all standard AR 15, and the problem here is that you’ll bump your thumb with the charging handle and your hand. The SCR also has a strong buffer spring, and it takes some force you rack the weapon. I use an extended charging handle to make it a bit easier to charge. 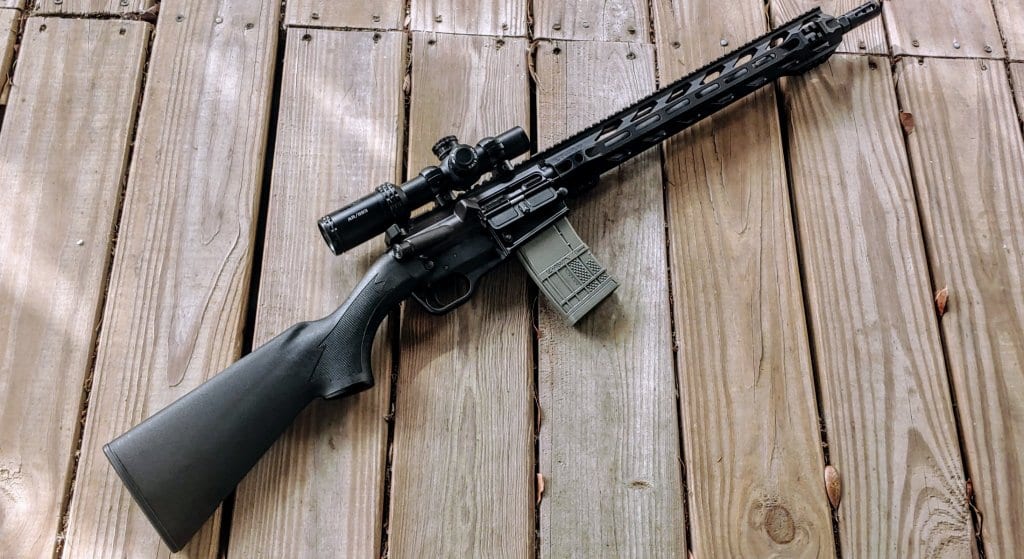 A neutral point of the SCR ergonomics is the stock design. It has a lower comb than an AR 15, so you use a low mounted optic. AR height sights give you more of a chin weld than a cheek weld.

On the Range with the SCR

The rifle is so lightweight and easy handling in that regard it’s a welcome respite from heavier guns. It snaps to the shoulder, and the different stock and pistol grip combination give it a unique and exciting feeling. It’s just different, and sometimes something being different is enough to be fun.

That SCR has barely any recoil. Less than a standard AR 15 by far. It’s a very comfortable gun that is entirely controllable. The length of pull is just perfect for me, and it’s very pleasing as far as macro ergonomics go.

The trigger is excellent. SCR did an excellent job with the trigger, and it feels very light and super smooth. It’s not precisely a Geissele, but it’s a superb stock trigger. The trigger helps the SCR in the accuracy department as well. Sure the upper has a lot to do with the weapon’s accuracy, but this is more about the lower. 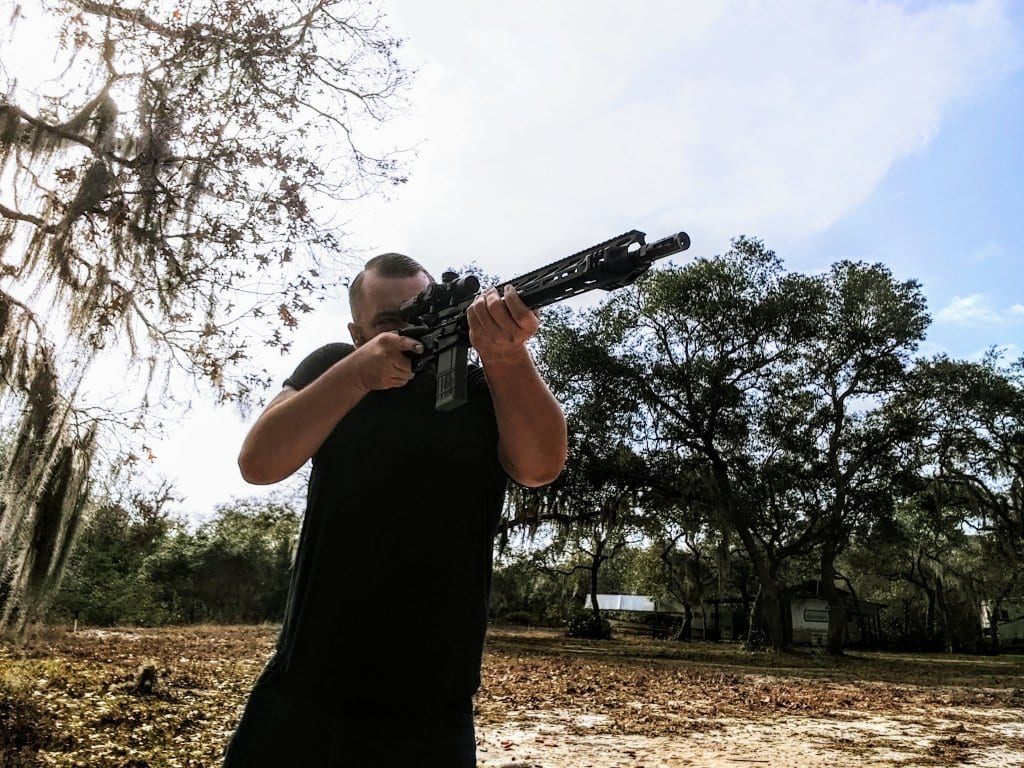 The lightweight trigger, the strong buffer spring, reduces recoil, and the rock-solid stock keeps things locked down and tight. It makes it a little laser beam at both extended ranges and in rapid-fire close ranges.

Reliability wise I’ve only had failures to fire with Monarch steel ammo. The hard primers seem to be the issue. If I recycled the rounds in the magazine, they’d fire on the second try. No other steel ammo gave me problems. I shoot mostly Hornady training ammo, which is higher quality steel, and it’s eaten it all.

It also functions with whatever magazine I toss into it. PMAGs, Lancers, KCI Drums, aluminum GI style magazines, Hexmags, etc. It all works, and all feeds the same. The SCR is far from being magazine picky.

Is it Worth It?

Good question. To many, it wouldn’t be. For the price, you can get a decent unassembled upper and lower. It’s a boutique item, and to me, it’s a collectible style rifle. It has a distinct look that’s rather steampunkish and semi sci-fi-ish. The SCR is a fun little gun, but it has a few ergonomic problems that shouldn’t be overlooked or ignored. It’s not a defensive rifle for me, and I can forget the ergonomic functions because it’s a fun and accurate gun. I may make it a hunting rifle just for the looks it will get.