If any modern handgun cartridge can achieve mythical status, it is likely the 10mm Auto. The 10mm cartridge gained popularity in the 1980’s at a time when semi-automatic pistols were rapidly gaining in popularity and the technology behind defensive hollowpoint ammunition was still in its infancy. The 10mm seemed to some to be the magazine-fed second coming of the .41 Magnum.

Miami Vice, an incredibly successful television show, helped to popularize the 10mm when one of its lead characters carried the Bren Ten. Meanwhile, due to real life events in Miami, the Federal Bureau of Investigation (FBI) was looking at the 10mm cartridge to solve its perceived handgun problems.

While the initial success of the 10mm Auto caused a lot of excitement, it was eventually supplanted by the .40 S&W as the duty cartridge for the FBI. As many state and local police departments followed the FBI’s lead, so did many shooters looking for a defensive handgun. 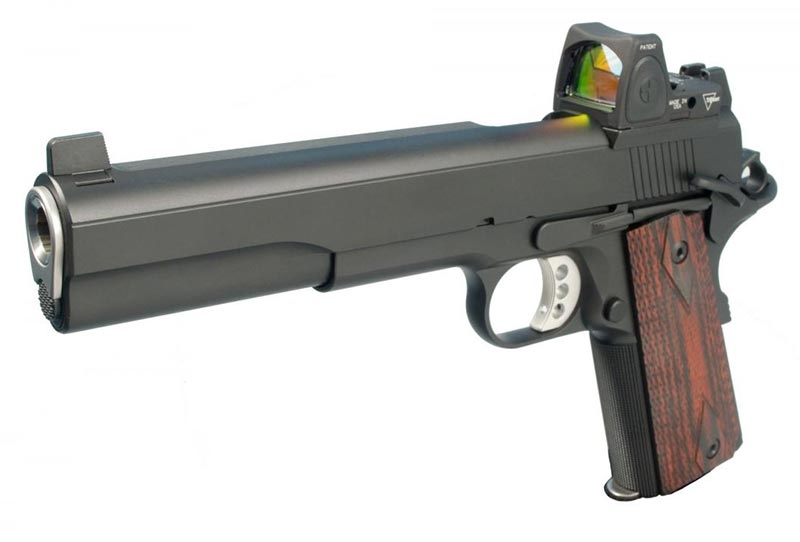 Right or wrong, the 10mm Auto has largely been a niche caliber since then. However, the niche is occupied by a hardcore group of shooters who value the great properties of the cartridge. From deer hunting to bowling pin matches to home defense, the 10mm can serve a wide range of roles if you find the right gun from which to launch it.

Ed Brown Products recently announced the company was building a new gun chambered for the 10mm Auto. It is called the LS10.

The LS10 is a 1911-style pistol where “LS” stands for Long Slide. Ed Brown Products builds the gun with a 6” barrel, giving the projectiles a bit more velocity and the shooter a longer sight radius for better precision with normal sights. On top of the gun, a Trijicon RMR sight is installed along with a set of tall night sights that can be used through the RMR.

Ed Brown Products uses a single stack, Government style frame, so existing 10mm Auto magazines should work fine in this pistol. A 9-round magazine ships standard with the gun. Both the slide and frame are made of stainless steel, and they are finished with a black Gen4 Coating. Unloaded, the guns weigh about 43 ounces.

These guns are a limited-edition gun according to the company’s order form. The price starts at $3,995.

I don’t know if this 10mm pistol will tickle your fancy. However, I suspect that there will be more than a few 10mm fans who will want one. As a limited edition, it might be best to jump on this soon if you are one of those fans.