Lever actions have been around since the 1800s. No question about it, the lever action rifle is old school. That can be both good and bad. It’s good, because the design is enduring and still popular enough to keep it going, and there’s a reason for that.

It can be not so good because the features are not the latest, greatest, most modern available. Lever actions are not typically constructed of lightweight polymers and aluminum alloys like many modern semi-autos are these days. Most lever actions are made from wood and steel, at least historically.

Here in Pennsylvania, the lever action has been a staple for deer hunters for decades, especially among older hunters. I’ve known guys who have hunted for years with one box of ammunition. They take their rifle off the rack, head out into the woods, fire one or two shots as they bag their deer, and then the rifle goes back onto the rack again until next year. Some of them will go as far as to take the rifle to the range the week before hunting season opens and fire a round or two just to make certain the sights are still zeroed. So a box of ammo lasts for a number of years with these guys.

In areas where shots are typically not very long, such as in the woods, the lever action will routinely suffice perfectly. The most popular calibers in my area of PA are .30-30, .35 Remington, and a smattering of .357 and .44 Magnum. Mostly, it’s the .30-30, though, almost overwhelmingly.

One thing we must consider: This design has been around for well over 100 years. In fact, the first one was invented in 1860 by Benjamin Tyler Henry. The lever action was The gun to have until after WWI when the bolt action began taking the world by storm.

There is a new trend for lever actions. Synthetic stocks and handguards are being used now, and rail systems are being attached to fore ends in an effort to bring the lever gun up to “modern” times. Some lever guns these days look more like a ray gun such as we might see in “Star Wars.”

The fore-end rail systems and Picatinny Rails will allow various accouterments to be bolted onto the rifle. We’re seeing scopes, lights, and lasers being attached. Essentially, the lever gun is going the way of the AR-15 carbine; turning a lightweight, handy carbine into a heavy, bulky weapon. Some of those I’ve seen appear to nearly qualify as a crew-served weapon. Unfortunately, some shooters believe that adding gadgets will enhance their shooting skills, which is seldom the case.

Readers may have guessed by this time that I’m a crotchety, old-fashioned codger. Personally, I prefer the classic, old-school look of a lever action, with nice wood stocks. Despite that, I’ll admit to liking the looks of the Ruger Guide Gun in lever action with the stainless steel finish. It’s slightly modern looking, yet it retains a certain amount of class.

Ruger recently took over Marlin and is producing lever-action rifles, so I think we’re going to see some great things coming from them.

Let’s take a look at some drawbacks and advantages of the old lever rifle.

In The Courtroom And Public

Perception is huge. When many members of the public see an AR-15, they get nervous (or worse). It is perceived as a Black Ray Of Death, capable of wiping out a small city or continent in mere moments.

However, when they see a lever action carbine/rifle, they see a “Cowboy Gun.” A hunting gun. It’s about as low-key on the Richter Scale as we can get for a firearm as far as alarming the local populace. Where I live, no one would give me a second glance if I were outside my home with one. They’re very commonplace.

Being prepared to defend ourselves without alarming people nearby is an advantage. Yeah, it’s great to have the attitude of, “I don’t care what others think.” However, do we really need to create a stir and a fuss? I’d rather be low-key and fly under the radar.

And, God forbid, if we ever have to use our rifle in self-defense, what happens in the courtroom is going to matter. At some point, members of the jury are going to see the weapon you chose to use on that fateful day.

Which would you rather have the prosecutor hold up, a “Cowboy Gun” or an AR-15 with a scope, light, laser, and other add-ons? Don’t get me wrong—I love the AR-15 and other semi-autos! I have a few myself. For defense, they’re hard to beat.

But winning in court partly has to do with appearances. And we want to appear to be the most reasonable, sane, down-to-earth person that we can possibly muster up. We want the jury to identify with us. How many members of that jury do you suppose will have an AR or AK platform at home waiting to defend their homestead? I’m willing to bet not one. Or even if we’re lucky and there’s one on the jury, the rest will not be.

Inmates have a joke, and some get a tattoo of 13 1/2. Do you know what that stands for? It means 12 jurors, one alternate, and a half-assed chance. Except, it’s not a joke. It’s for real. I spent my entire professional career in the legal/law enforcement system, and I’ve seen innocent people locked up with my own eyes. Trust me, the court system is not something that you want to take lightly.

I guarantee the prosecutor would hold up the AR-15 we used and say something akin to, “Mr. So-And-So was just waiting to use this weapon of mass destruction on someone, and now he had the chance!” And that’s not going to look great for us and our case.

It’s quite probable that if we use a more mundane weapon for defense, it will be more accepted, despite the fact that whatever we happened to use fires a projectile. Again, it’s all about appearances.

As I mentioned, the old lever gun is going to be more socially acceptable than a great many other weapons. An additional thing to consider is the legal aspect.

In many states, semi-autos are stringently regulated, if not outlawed. Owning an AR-15 might not be legally possible in certain areas. However, we’re not aware of any locality that prohibits hunting rifles. Consequently, anyone can own a lever action, within reason. For many people, that is going to be a factor that they need to consider.

As mentioned, I’m a purist and prefer the classic look of a lever gun, without scads of gadgets attached. That said, I can’t fault anyone who adds a light to his rifle, because target identification is paramount in darkness. I could also see adding a low-power scope or even a red dot sight for close encounters. Maybe even a side saddle ammo carrier on the stock. Beyond that, I can’t see dressing up this type of rifle.

On the other hand, if the black, tactical look is your thing, have at it! It’s your rifle, and I can’t fault your tastes if they differ from mine.

Will a lever gun suffice to defend your homestead from intruders? We believe it will. And with the number of people modifying lever actions, as well as the schools offering courses specifically aimed at lever actions, we’re not alone in our opinions.

With a little practice, a shooter can attain a respectable rate of fire and keep the lever gun’s magazine topped up and running.

We have to ask ourselves how many attackers we expect to descend upon our location. Anything within reason can be handled by a cool head and a good lever gun.

No, we wouldn’t want to be dropped into a hot landing zone in a combat situation with a lever action rifle, nor conduct a SWAT operation with one. There are more specialized tools for such things.

For the homeowner, though, looking to defend his family, the lever gun will do it fine. And let’s not forget the thousands of hunters, ranchers, and outdoorsmen who tote lever actions daily. They take game, sometimes dangerous game, with these rifles. It stands to reason that two-legged predators will be stopped by these rifles too.

The lever action might be one of the best-kept secrets going today. It’s a good idea to pick one up. It has been around for well over a hundred years and will continue to soldier on into the foreseeable future. 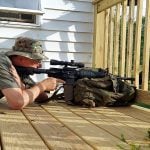 The Brace Ban — What Can You Do About It?

The Pelvic Shot: Breaking Down Barriers