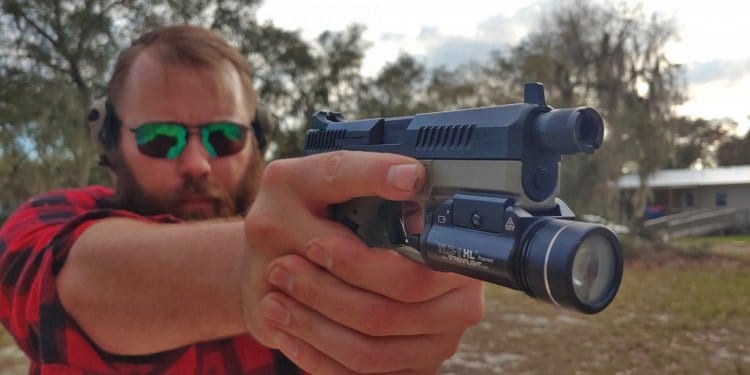 The CZ P10C has been out for quite a while now, and its release marked a significant change for CZ in the modern era. This wasn’t their first striker-fired design. Previously, they built the CZ 100 but it was a disaster — a disaster big enough to keep CZ exclusively producing hammer-fired DA/SA guns for a couple of decades. So, the introduction of the CZP10C was a big deal a few years back. Since then, the P10 series has evolved into a full-sized and subcompact model. CZ was smart with the P10C. They examined the striker fire market, who owned the most significant share, and what gun specifically owned that top spot.

It goes without saying that Glock still owns the top spot of striker-fired, polymer-framed handguns. Of all the Glock handguns, the 19 gets the most love. So CZ wisely produced the P10C, with the C standing for Compact. It’s roughly the same size as a Glock 19, chambered in 9mm and 40 S&W. Today we are talking about the 9mm variant, accurately a suppressor-ready model with an urban grey frame. CZ didn’t just copy the Glock 19 and call it a day, they made a superior firearm, priced it competitively, and then called it a day.

This article originally published in March, 2020. 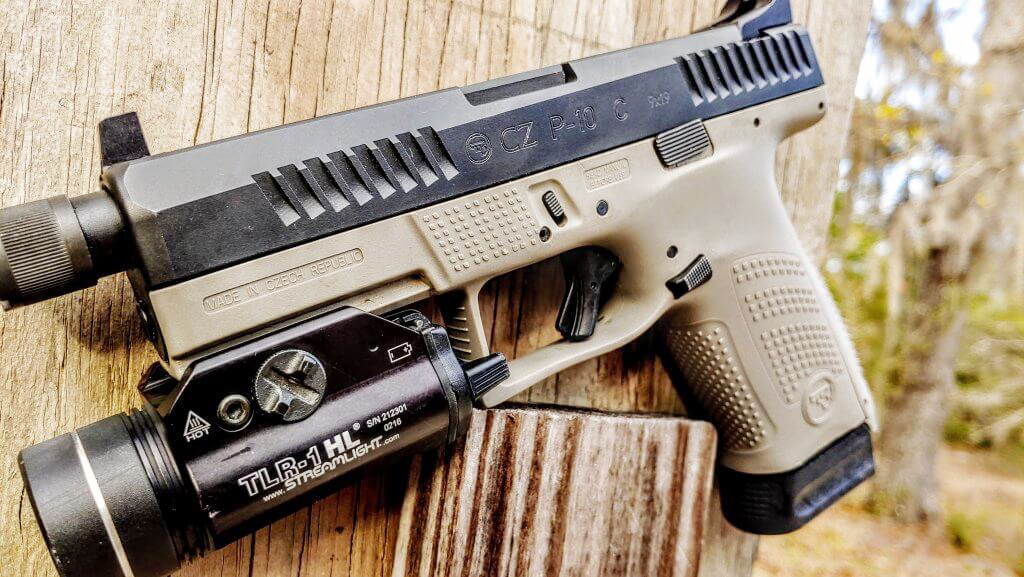 CZ’s P10C is a striker-fired pistol that makes great strides in making for its predecessor!

What Makes the CZ P10C Stand Out

Maybe you can tell by the beard and the plethora of Dixxon flannels I own that I’m a bit of a hipster. I’ve been called worse, but on top of my enjoyment of craft beers, good coffee and flannels is a love of CZ firearms and a streak on contrarian. So maybe, just maybe, I’m biased. I own a Glock 19, a Glock 29, two Glock 17s, and I appreciate them for what they are, so don’t think I hate Glocks, quite the opposite.

I do think the CZ P10C is a better firearm than the Glock 19, especially pre Gen 5 19s. The CZP10C came with an ambidextrous magazine release, ambidextrous slide locks, front, and rear slide serrations, metal sights, a flat face trigger, and one of the most aggressive grip textures I’ve ever experienced. Oh, and as a bonus, CZ tossed in +2 extensions with the P10C. The newer models dropped the ambi for a reversible magazine release, but we’ll cover that later. 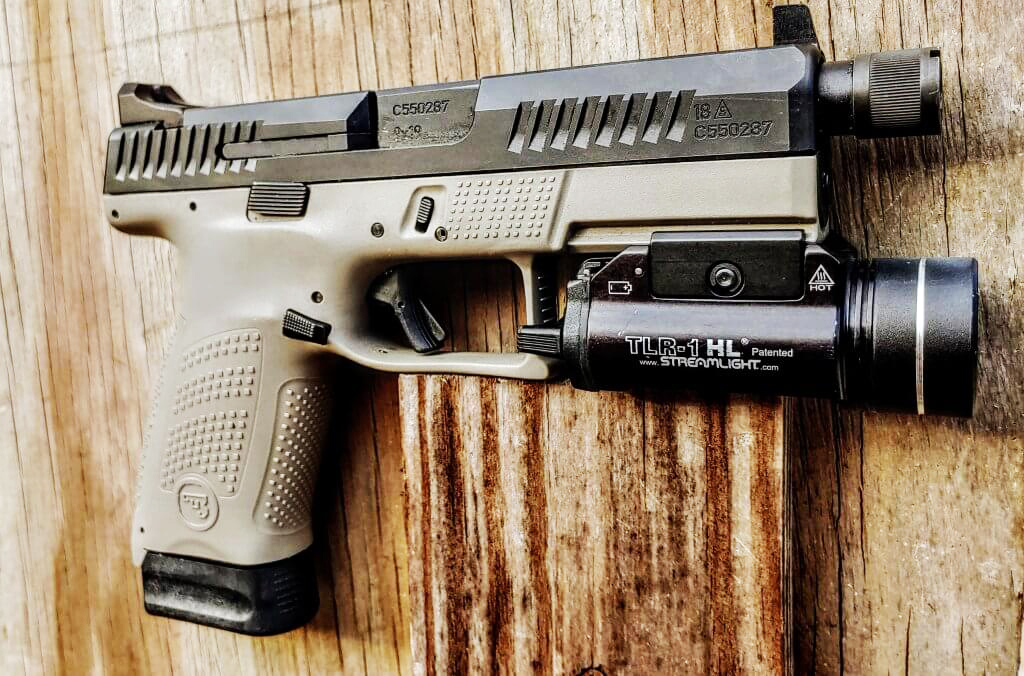 The P10C has been available for a few years now but remains popular.

Price-wise they compete with the majority of the market, often being slightly cheaper than the competition. I got my suppressor-ready model for $299 when they cleared out the ambi- mag release non-optics models, in order to bring in the newer OR models. My suppressor-ready model comes with a threaded barrel, as well as suppressor-height night sights. Most standard P10C models use three-dot metal sights, and all new models are optics-ready.

The P10C is a compact handgun, but numbers tell a better story than that. The first measurement in these groups is the standard P10C, and the second “SR” model is the suppressor-ready model measurements. 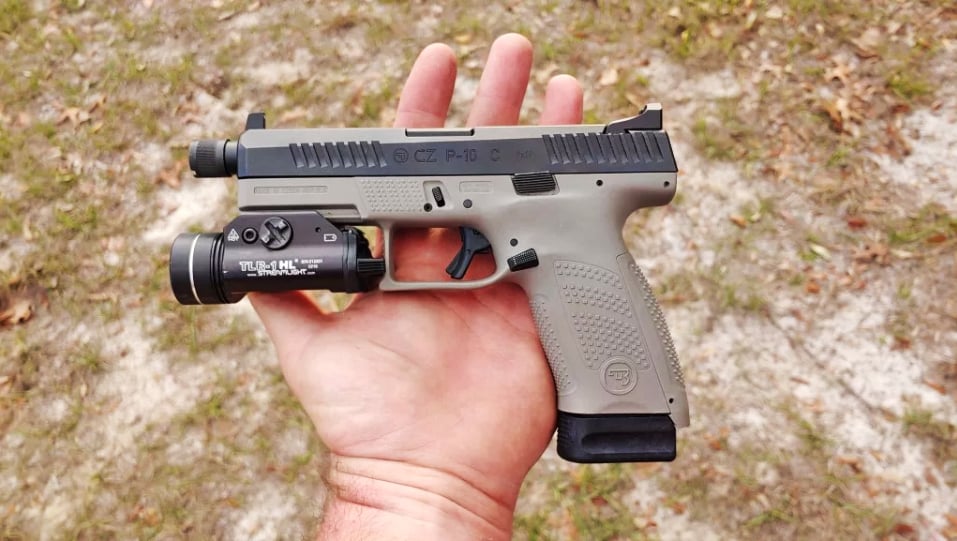 The striker-fired compact CZP10C is an excellent CCW pistol.

It’s not pocket-sized, but it’s far from unwieldy. It’s complete with a short rail, and the TLR 7 actually fits amazingly on the gun. It sits flush and pretty. However, if you want a full-sized light, the Streamlight TLR 1 also fits very well on the gun.

Getting Handsy with the P10C

The ergonomics are typical for CZ, meaning they are pretty freakin’ great. The grip texture is exceedingly aggressive, and I love it. It grips the hand, and after sending a mag downrange, it leaves an excellent little impression. The slide never comes near slicing my hand, and the serrations are deep and plentiful.

I have big hands and find the grip to be the perfect length for me. It’s comfortable and feels very natural in my hand. The ambi- controls are friendly, but there is a reason they moved away from the ambidextrous magazine release. 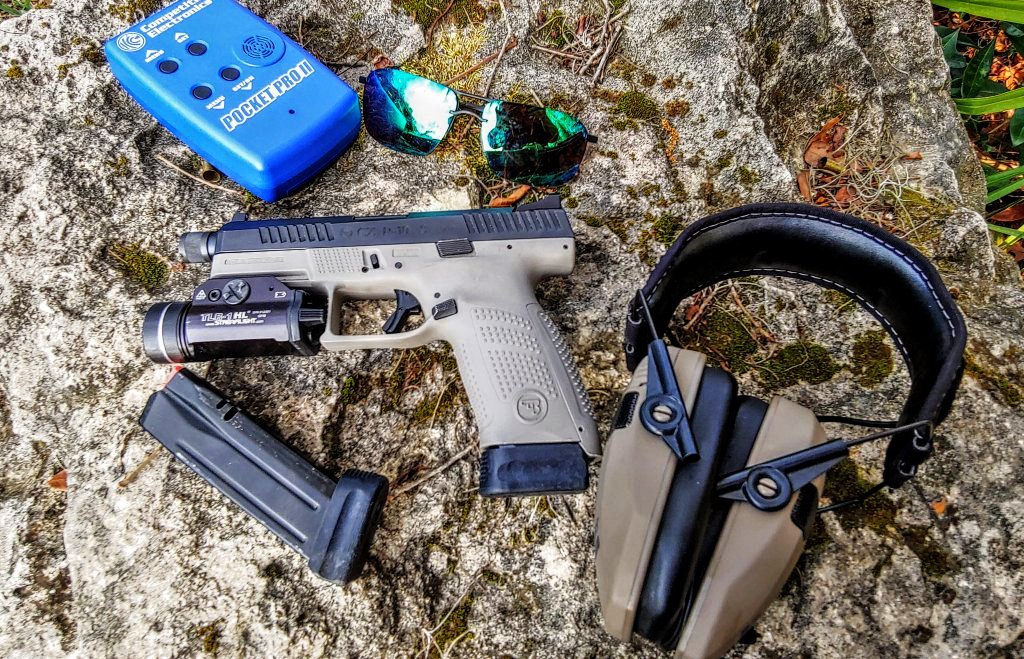 Need a CZ P10C magazine, or maybe a few? GMW has them in stock.

The release feels extremely tight when the magazine is fully loaded with a plus-one in the pipe. This is especially true when the gun is new. Over time it does loosen up but remains tight compared to other firearms. If you don’t plus-one the weapon, the magazine release is relatively reasonable.

The slide lock is one of the few that actually locks back for me when I use a thumbs-forward grip. The slide lock is tight to the frame but textured for smooth engagement. It’s not as nice as the CZ P09 slide locks, but it works.

The P10C is a fun little gun to shoot. Recoil and muzzle rise is what you expect from a compact 9mm. It’s completely controllable with all standard 9mm loads, including +P loads. That extra aggressive grip texture gives you a good solid purchase over your handgun and helps you keep a good grip when firing rapidly.

The trigger is also very well done. The flat face design is more comfortable for me, especially when it comes to extended training sessions—no pinching, no rubbing, and nothing uncomfortable about it. The trigger has a slight take up and a crisp break. It has a short but positive reset. 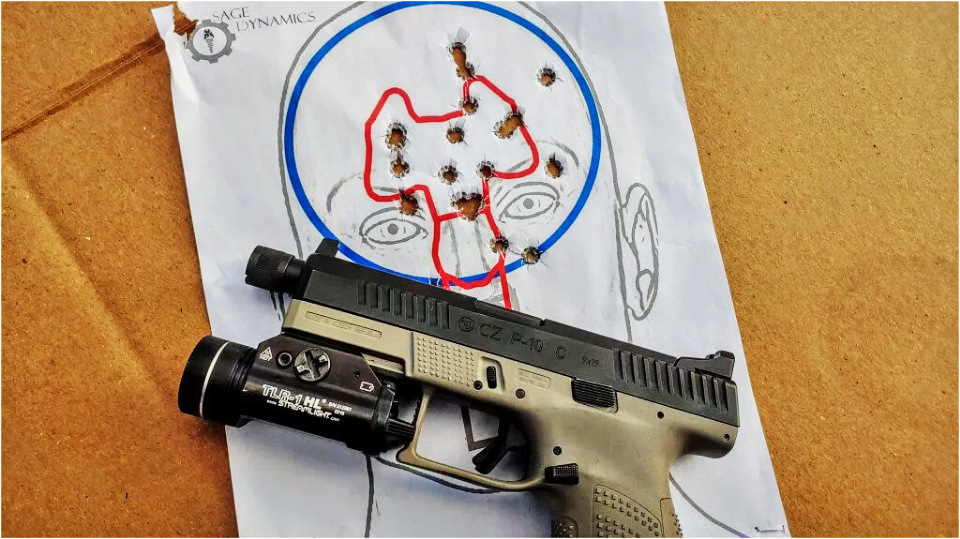 The suppressor height night sights are very efficient and eye-catching. They are precise and accurate and allow for a great sight picture with a proper presentation. Out to 50 yards, I was ringing a 10-inch gong more often than I was missing. At 25 yards, I could rapidly fire the gun ad keep every round on the same gong. Reliability has never been an issue. Even when it comes to cheap steel ammo, it eats it all and goes bang with every pull of the trigger.

Shots Fired with the P10C

The P10C is a fun and easy shooting gun. It’s proven to be very reliable, quite accurate, and easy to handle. There are a few ergonomic kinks, but you are getting a lot of gun for the money. Especially if you find a good deal on the older non-optics ready models. The P10C is a gun designed for duty or concealed carry or home defense, or just as a fun shooting, easy handling gun. 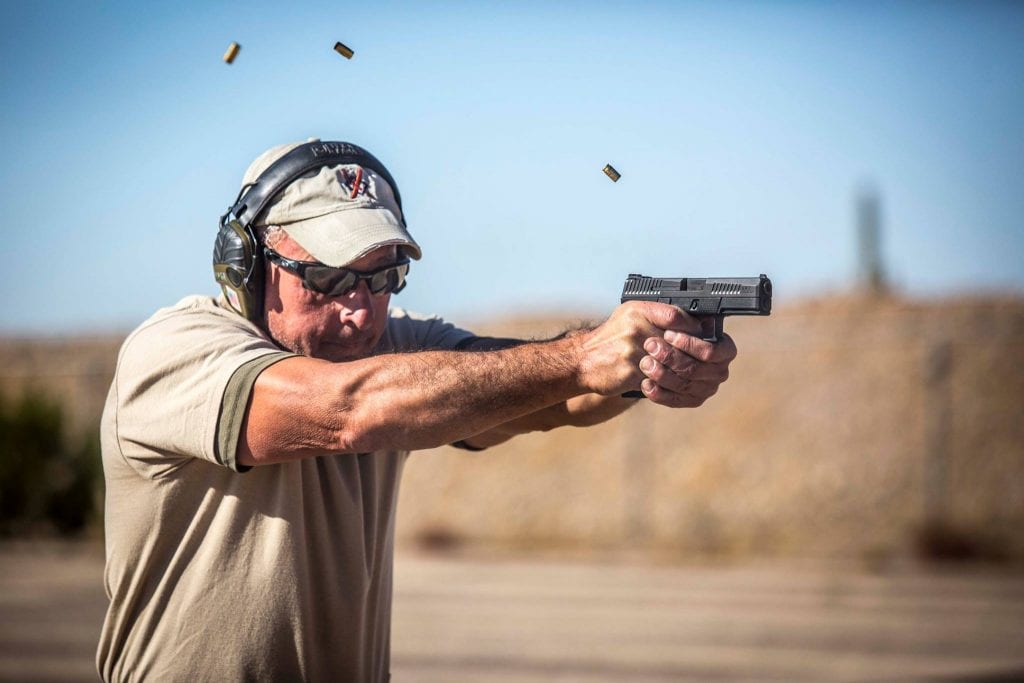 Weapon Lights: yes, you need one; read more about ’em.

“Much more than just our take on the striker-fired pistol, the P-10 is decidedly CZ, from the way it feels to the way it shoots.

First order of business, ergonomics. Anyone who’s picked up a CZ 75 for the first time gets it — it just has to feel right in the hand. With the CZ grip angle, the P-10 avoids that ‘brick-in-the-hand’ feeling that has plagued many in the striker-fired genre, allowing it to point naturally. A mild palm swell, deep beavertail and three interchangeable backstraps make the P-10 fit a wide variety of hands as if it were built for them. Because it was.

Next up, trigger. So many striker-fired pistols do many things right, falling short when it comes time to pull the trigger. The CZP10C trigger is designed to minimize creep and stacking, and after initial break-in averages a clean 4.5-5 lb pull and rebounds with a short, positive reset — meaning single shots can be meticulously placed while follow-ups are effortless.

Built to withstand the rigors of military use, its fiber-reinforced polymer frame and hardy nitride finish are made for the daily grind. A generous trigger guard allows use with gloved hands while being undercut to allow as high a grip as possible, and a set of metal tactical 3-dot sights allow for one-handed manipulation of the slide on a belt.

Take-down of the CZP10C will be familiar to most fans of striker-fired guns, and even more pleasing will be holster compatibility with some of the most common guns on the market.

One change that happens on both the US-made and Czech-made P-10s is the switch to a swappable magazine release. With a change in geometry, the goal was to eliminate the stiffness some customers experienced as the magazine release broke in, even though it became smooth after some use. This new reversible release just requires a few minutes to swap, allowing the P-10 to remain lefty-friendly.

It may have taken a while to come to market, but we feel the wait has been worth it. With CZ reliability, engineered ergonomics and a bevy of features both familiar and new, the CZP10C is the complete package.”