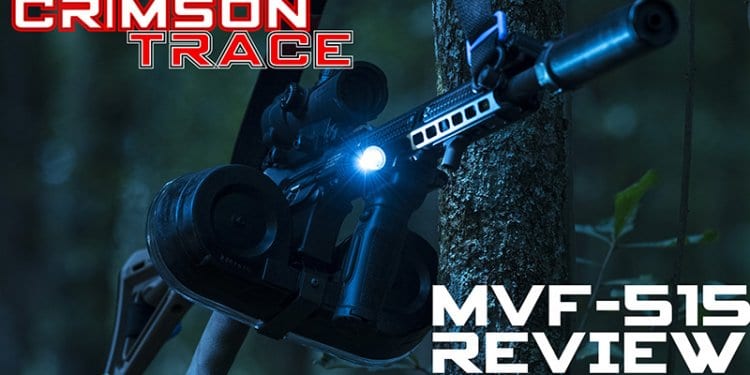 A few years ago, I had a chance to compete in the last Crimson Trace Midnight 3-gun event to ever be held. Part of my invitation as a writer, included my choice of a handful of Crimson Trace products to use at the match. I picked up a pair of green and red laser/light combination units and a Modular Vertical Foregrip from Crimson Trace that includes a laser and light unit built in.

At the time, might stock of AR-15 accessories was a bit thin, so I figured why not kill three birds with one stone? Get myself a tac light, tac laser and a VFG in one cool package. Also, since it was a gift, I didn’t bother looking up reviews for it beforehand.

When the MVG-515 arrived, the first thing I noticed was how cool the packaging is. I know that sound stupid, but first impressions are permanent, and aesthetics/packaging is important when you’re paying hundreds of dollars for a product. It’s important to make the consumer, (me in this case) feel like they’ve invested well. The Crimson Trace MVF certainly succeeds in that regard, but what about performance and features?

I’ll be honest, I’m awful at reading instruction manuals. I like to sit down, play with something for an hour and get solid visual memory of how it functions and feels in my hands. Yes, even with firearms I still do this. 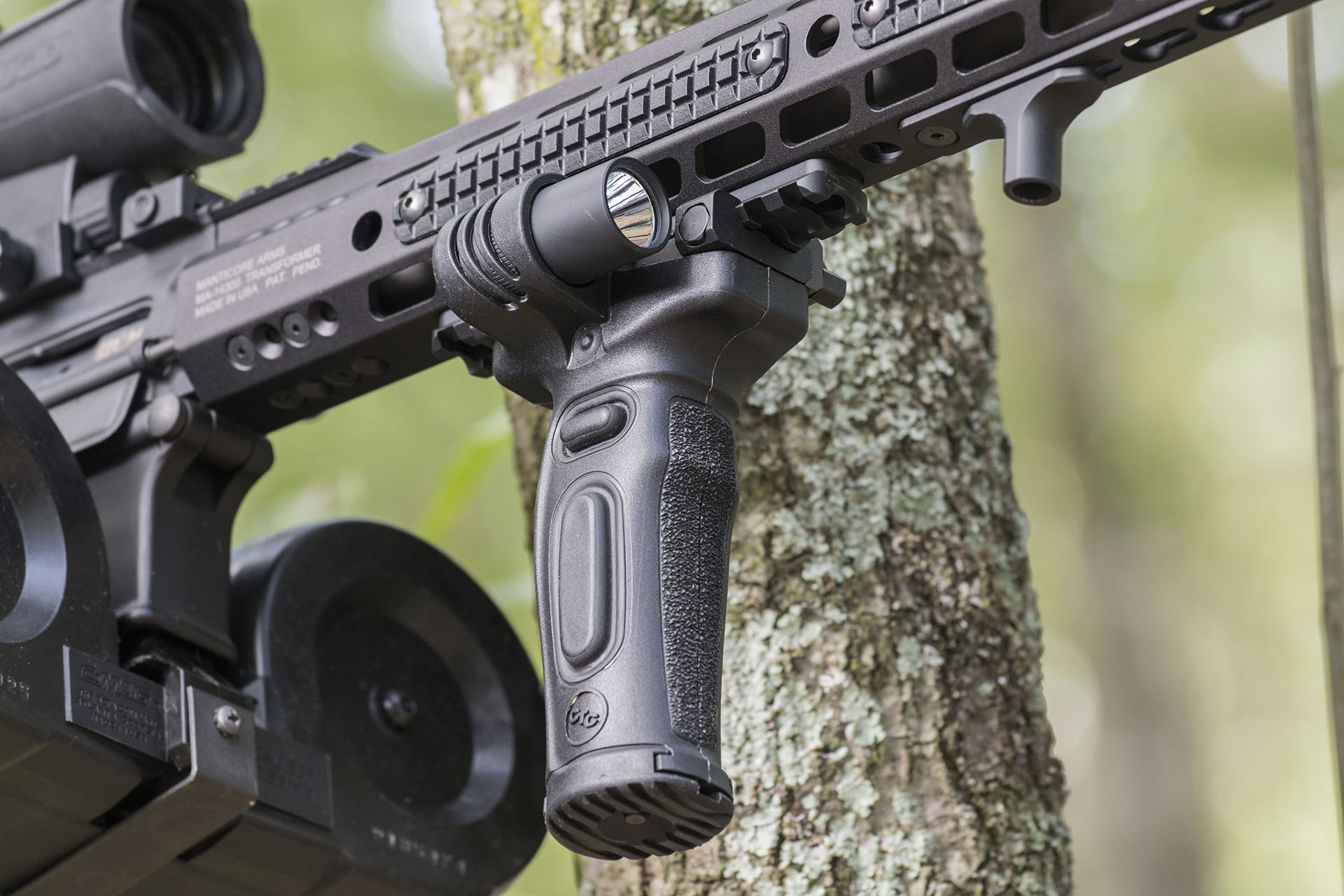 So When I first played with the MVF-515, I found its features to be lacking – like it wasn’t a very well thought-out product. At least that was until I went to the trouble of actually reading the instruction manual.

See, by default the MVF has both its laser and light set to momentary only. So if you depress the button for either function, it remains on only while you continue to hold said button. Above these buttons is a small nipple-like nub button that functions as a master on/off switch. If the user holds this button down, it cycles through the available functions of whichever component is above it. So the right one controls the tac light, and the left one controls the laser.

This is actually pretty cool. It means shooters can independently program either accessory to fit their personal or mission critical needs. The available functions include a momentary normal, momentary strobe and constant on/off. While tactically I normally like to have my lights set to momentary so I can quickly clear an area without broadcasting my position to anyone lurking nearby, the stiff controls of the MVF make it difficult to depress fully and hold.

This might seem like a bad attribute, but it actually helps prevent shooters from accidently turning on either portion of the light, or from it being clicked on while inside a rifle case or safe.

One thing I found surprising about the MVF, is the extent to which the laser portion of the grip is adjustable for windage and elevation. Sure, most laser aiming modules are adjustable, but this thing has like 40 MOA of adjustment. While obviously not necessary, it’s nice to have just in case your rail doesn’t quite fit the handguard, and you need to adjust the light or laser accordingly. 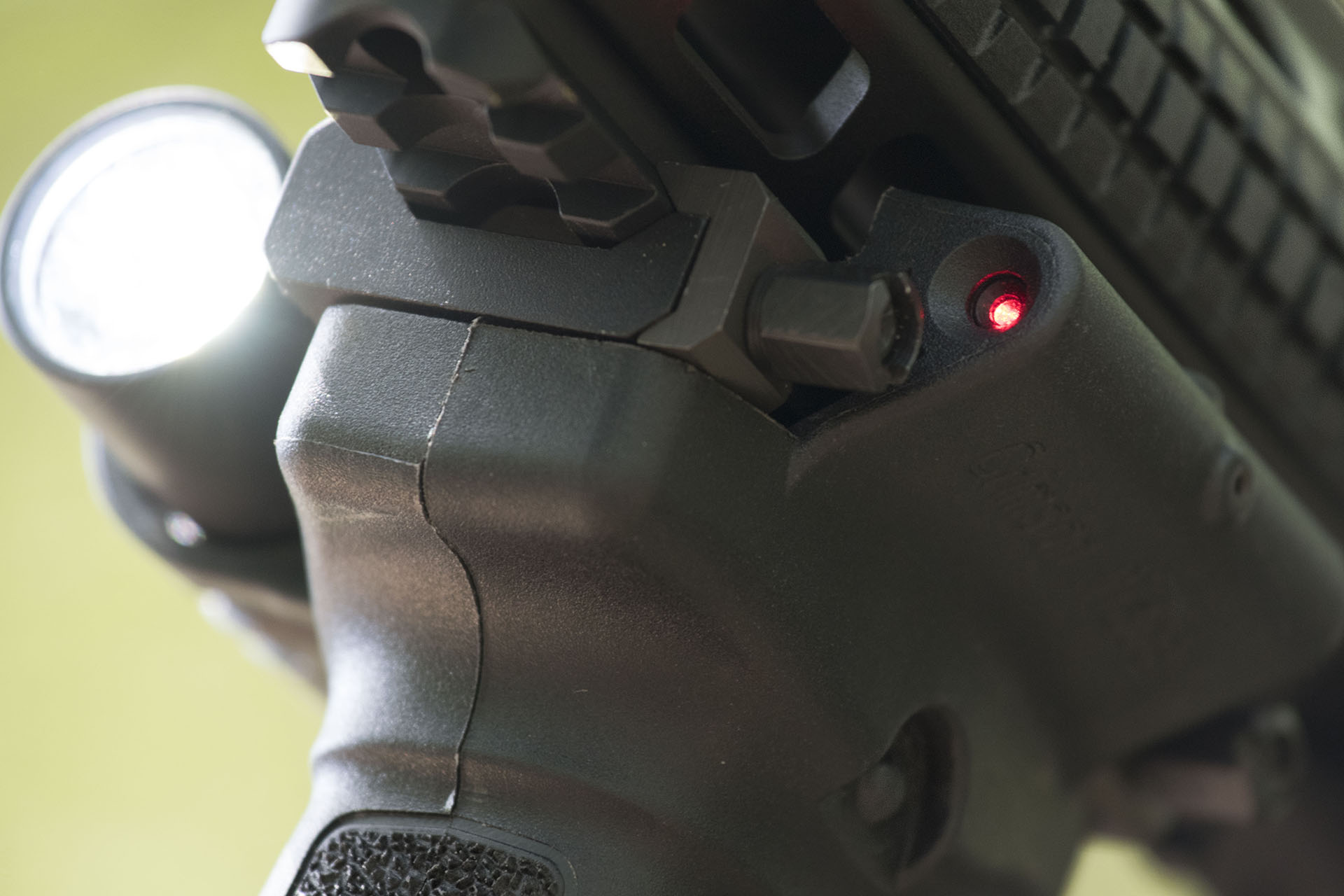 So after running hundreds if not thousands of rounds through various guns with the MVF mounted on them, I can say with total confidence that it holds zero well enough for a laser sight. Basically, if there was a point of impact shift, I couldn’t see it or measure it.

Additionally, the light attached produces 200 lumens, which isn’t the brightest tac light on the planet, but it does strike a good balance between rays of the sun and battery life. Using my unit sparingly while running night shoots or clearing rooms in a house for demonstrative purposes on a regular basis has yet to drain my first pair of batteries.

After spending a good amount of time with the unit, I have to say it’s not perfect for every situation and I particularly don’t like the weight of the unit when mounted on heavy-barrel carbines. Where this unit really shines (pun intended) is on either SBR carbines or bullpups like the X95, where its added weight isn’t as noticeable since it’s located closer to the center of the carbine itself.