Crimson Trace has long been known for high-quality lasers, but they also produce optics. How do they stack up? In the video linked below, Aaron Cowan of Sage Dynamics puts the Crimson Trace CTS 1100 3.5x magnification illuminated optic through its paces and gives us a bottom line.

Aaron notes that the CTS 1100 is in the same category as the venerable Trijicon ACOG, with which he has long experience. He’s interested to see if the Crimson Trace product, like the ACOG, is “a very durable fixed magnification optic for intermediate range purposes.”

Crimson Trace recommends the CTS 1100 be zeroed at 100 yards. Aaron notes the optic has 0.5 MOA adjustments, but he prefers 0.25 MOA for a 100-yard zero. Crimson Trace does not specify which round the BDC is for, but Aaron used it with 5.56 NATO. The CTS 1100 does have an adjustable focus reticle, unlike some fixed magnification optics. That’s a nice feature for shooters who wear corrective lenses. Other features include:

Aaron starts every test with what he calls a “burn down.” He fires 500 rounds as fast as possible to see how the item holds up. In this case, Aaron wants to see how the one-piece mount handles the heat transfer. He specifically looks for a flickering reticle or any mirage effect. The CTS 1100 held up with no problems from the heat emanating from 500 rapid-fire rounds.

Aaron does wish the reticle was brighter in daylight. He says it’s great in low light, but he thinks it needs three or four additional brightness settings for daylight shooting.

He also characterizes the eye relief as “very unforgiving.” The shooter has “one inch worth of play, if that, to get a proper pocket for proper eye relief so you’re not introducing scope shadow into your sight picture.” Aaron finds that problematic, “especially for an optic that should work as well in close quarters as it does at intermediate distances.”

Aaron performs four shoulder height drop tests onto a flat rock, with the rifle’s full weight landing on the optic. “Because things happen,” he says, “gravity exists. Life is random. Your optic can take a spill…I’m doing it so you don’t have to.” Aaron follows each drop test with another 500 rounds, incorporating select fire and close-quarters shooting.

The protective shrouds did their job on each drop test, though the third drop damaged the unprotected battery compartment. The cap popped off and was dented. Aaron was able to screw it back on and the CTS 1100 kept running. The optic maintained zero after every drop and throughout the entire test. Durability doesn’t seem to be an issue.

He also comes back to the “unforgiving” eye relief as a negative. Aaron says it makes snap shooting from the low ready or high port “somewhat problematic.” Target acquisition took noticeably more time than with a traditional 1-8x, 1-6x, or red dot. He didn’t care for that. Aaron doesn’t characterize the eye relief issues as a “huge failing point” because eye relief is a real thing. But he feels that eye relief should not be as big a problem on a 3.5x optic as it is on the CTS 1100. He says, “there shouldn’t be such a small margin of error.”

On the plus side, Aaron really likes the reticle. He says he loves the “war bonnet” style and notes that it’s clean and collects plenty of light in the lens. It was good in transition. The BDC was accurate on man-sized thoracic steel targets out to 250 meters. Aaron says the reticle is his favorite part of the CTS 1100, even though he wishes it was brighter.

The CTS 1100 is “reasonably priced,” but Aaron notes you can get a pretty decent variable magnification optic for about the same price. 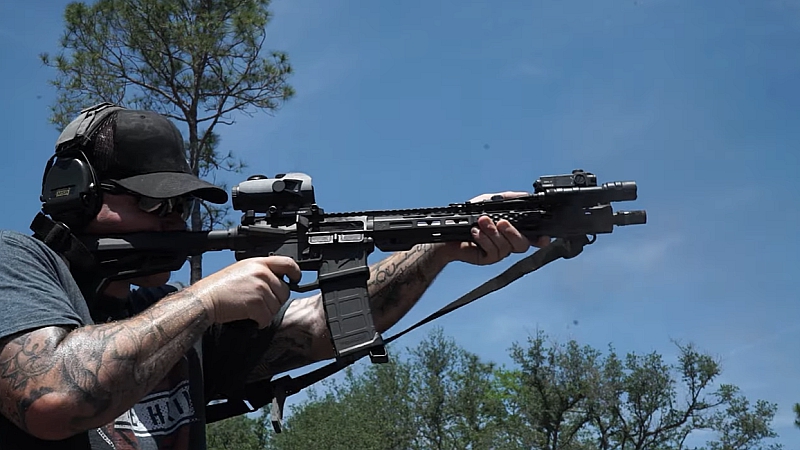 Aaron says that if you’re looking for an illuminated reticle fixed magnification optic, you should at least take a look at the CT 1100. But he always comes back to the “unforgiving” eye relief and the need for a brighter reticle. If that’s not an issue for you, maybe give it a look. As always, everyone is different, so you do you.