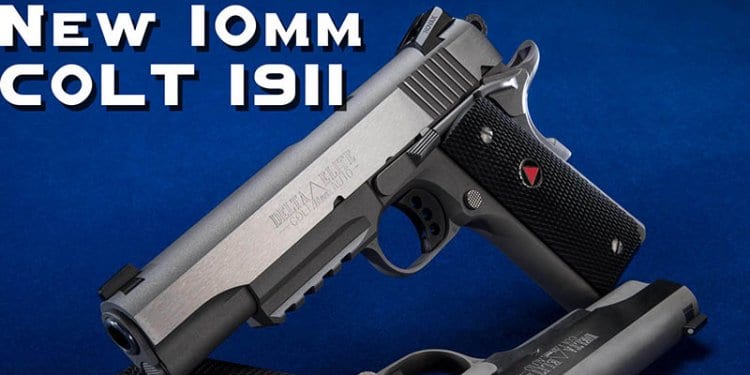 The Colt Delta Elite is one of those rare guns that is universally loved by gun nuts everywhere. It takes the smooth trigger, and God-tier ergonomics of the 1911, and pairs it with the hard-hitting 10mm cartridge.

The action under the hood is still the same swinging-link, locked lug action of Browning’s magnum opus, just reinforced to for the increased pressure levels of the 10mm round. The gun still features the iconic red delta triangle on the grips, but now features a railed dust cover for mounting lights, lasers or any other Picatinny accessory a shooter needs. Check out the press release below.

”WEST HARTFORD, Conn. (January 4, 2017) – Often considered the manufacturer that saved the 10mm round from obscurity in the 1980’s, Colt readies yet another offering in that powerful chambering with the new Delta Elite ® Rail Gun ®. Aimed toward the outdoorsman who requires a sidearm stout enough for midsized game who prefers the proven 1911 platform, the Delta Elite ® has always been a top choice.

With its recent redesign, it didn’t seem that the model could get any better, but Colt found a way to improve upon the design again by offering the Delta Elite ® with an accessory rail.

“The Delta Elite ® started its life as tactical option for 1911 enthusiasts who required more stopping power than your tradition .45 ACP,” said Justin Baldini, Product Director for Colt. “In that world, an accessory rail makes a lot of sense. What we’ve seen, though, is that this is a great platform for hunting pig or other medium sized game. In those types of scenarios, proper illumination is critical, so I think hunters will really appreciate the ability to add on their favorite rail-mounted lighting.”

In a nutshell, Colt is pushing the gun as a solid pig-hunting, man-stopping sidearm; two roles the gun and cartridge both excel at. As a fan of the 10mm, I personally can’t wait to get some trigger time on the new pistol at SHOT Show 2017 – who knows, maybe we’ll get a threaded version in the near future. Because the 10mm is no joke, so even if shooters don’t want to run a suppressor on the gun, a compensator would be a nice addition.