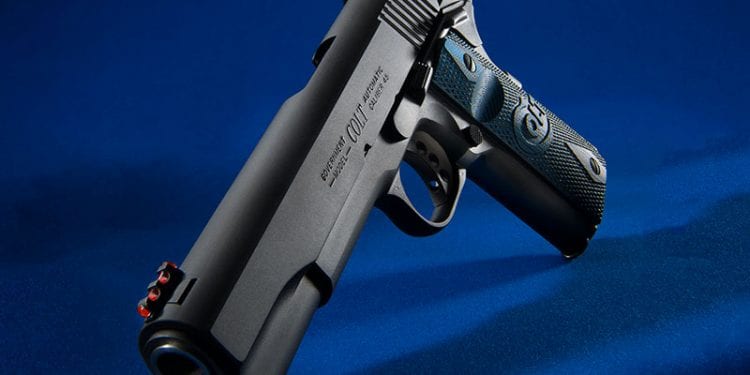 Colt’s Manufacturing Company (aka “Colt”) announced it would now manufacture its Competition Pistol with the Series 70 firing system. For 1911 shooters that dislike Series 80 pistols, this is sure to be good news.

According to the information provided by the company, Colt will make the new Series 70 Competition Pistols with the same features as the existing Series 80 pistols. This includes a front fiber optic sight, Novak adjustable rear sight, custom G10 stocks, and undercut trigger guard and a 5” National Match barrel. The guns also have a dual spring recoil system to help manage felt recoil and muzzle flip.

If you are not a 1911 enthusiast, you might be confused by the differences between Series 70 and Series 80 pistols. In a nutshell, the Series 70 design is the older Colt design while the Series 80 is a newer design that adds a physical drop safety mechanism.

A drop safety is a mechanism that prevents a gun from firing if it falls and hits a hard surface. There are numerous recorded incidents of guns of all types from a variety of manufacturers that have discharged when dropped. Frequently, these kinds of incidents will result in a lawsuit, so they are often well documented.

The Series 80 drop safety mechanism was developed to arrest the firing pin and prevent it from moving until the trigger is pressed. It includes additional parts to positively secure the firing pin. Many 1911 shooters do not like the Series 80 system as they claim the system ruins the trigger pull.

A drop safety mechanism was not the only change between the 70 and 80 guns. Series 80 guns also had redesigned hammers and a solid barrel bushing, for example, neither of which have anything to do with the firing pin block. However, the drop safety mechanism tends to generate the biggest debate.

The Series 70 pistols will not cost anything more than the existing Series 80 handguns. A blued Competition Pistol will run you $899, while the stainless model will cost $999. Of course, those are suggested retail prices. Your dealer will set the actual sales price.

Both blued and stainless pistols are available in 9mm and .45 ACP. If you prefer to run .38 Super, a classic 1911 pistol competition cartridge, it will cost you a bit more. Those guns cost $949 and $1,049 respectively. If you don’t already have a bunch, make sure you pick up some inexpensive Colt 1911 magazines. These will help keep the gun running reliably for many years to come.