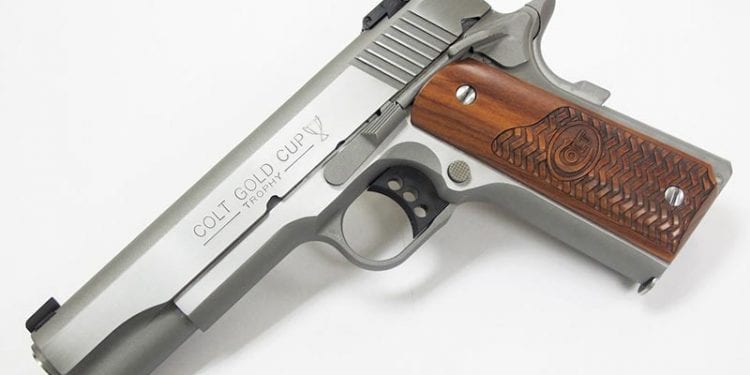 The pistol is one that a lot of Colt fans are likely to want as it checks a lot of the boxes than fans seem to have. First of all, this is a 70 Series gun. That means it uses the older style fire control system without the extra safety mechanisms that are found in the 80 Series guns. The 80 Series system is widely regarded as unnecessary for safety in the 1911 design and decreases the overall feel of the trigger.

On top, Colt uses Bomar-style, adjustable rear sights and a Patridge style front sight. Many target shooters prefer this type of sighting system for the crisp corners in the sight picture for precise alignment on a target. Colt uses the Gold Cup wide trigger. This trigger is curved with three holes to reduce its weight.

For increased reliability, the ejection port has been lowered and flared. Additionally, it is cut for more reliable ejection of live rounds. The magazine well has been beveled for smoother reloads. The gun is chambered for the .45 ACP cartridge and takes Government-sized 1911 magazines.

On this limited run gun, Colt uses wooden grip panels with a partial basketweave pattern. Standard Gold Cup Trophy pistols have blue G10 grips, and I think the stocks on this special edition pistol are much more attractive. Certainly, they have a more traditional look without resorting to the standard double diamond grip panels.

The gun has a stainless finish with the high, flat surfaces polished. This creates a two-tone effect that a lot of shooters seem to like. The Gold Cup Trophy roll marks are located in the typical place on the slide. For this model, Colt went with wider serrations on the rear of the slide.

According to TALO, the limited run guns will have a number of features commonly associated with Colt’s Custom Shop. In fact, the gun ships in a Custom Shop box, suggesting that these guns are a product of the gunsmiths in that division. TALO did not provide a suggested retail price on these guns. For comparison purposes, the standard Gold Cup Trophy pistols have a MSRP of $1,699.

TALO stated the guns are now shipping to wholesalers. So, if you like the look of these guns, talk to your local gun shop. They should be able to order what you need.