Does .380 ACP stack up as a viable defensive caliber? How do you incorporate it into your defensive battery? Colion Noir discusses his thoughts about the subject in the video below. 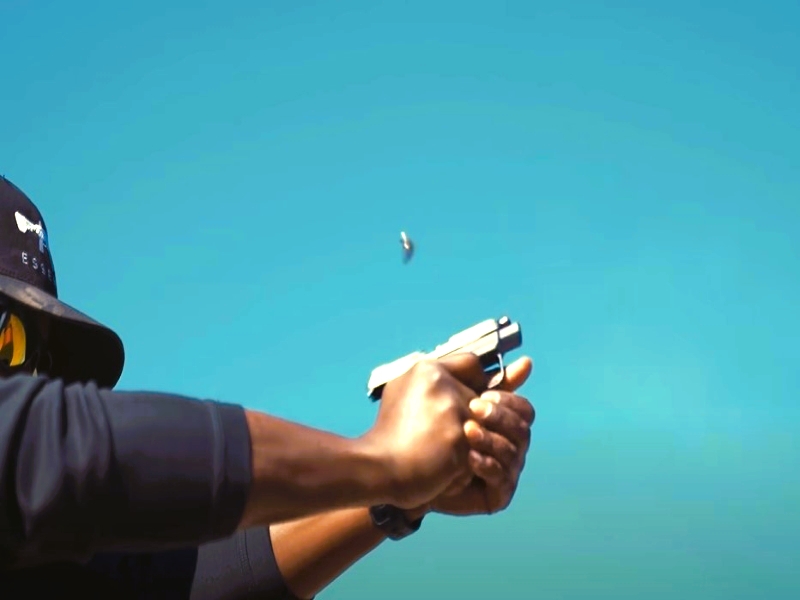 He begins by explaining that, when he first came onto the gun scene, everyone told him to make his life fit around his gun. For some people, that’s fine, but not for Colion because although he loves guns, he does not want them to dictate his entire lifestyle.

He carries a Ruger LCP II for self-defense sometimes when he’s going to his mailbox which is “a bit of a ways” from his house. He has to walk to it and he does so at varying times, including after dark. He likes to keep his .380 Ruger by the door so it’s convenient for him to slip into his pants or the pocket of a hoodie and “Call it a day.” He doesn’t have to go and put a holster on or jump through hoops to go out the door. In short, it’s convenient. And after all, there are times when it’s just nice to have convenience.

That little .380 slipped into a pocket is a lot better than simply not carrying a pistol at all. It’s easy and fluidly fits Colion’s lifestyle. It works, and so he does it. I’ve done a similar thing with my .38 Airweight revolver; I might be running to the corner store and want to have something with me, so I slip the .38 into my pocket rather than gear up. I suspect that most of us who carry firearms have likely done something similar.

He expounds on one of his earlier statements about making our lives fit around a gun. “Meaning, you find the absolute best gun possible and then you change everything about your life (not everything), but change enough about your life to make it work.” Changing his wardrobe solely because of the type of gun he carries is not something he is willing to do (baggier pants and t-shirts are examples that he gives).

“As much as I love guns, I’m not going to allow them to dictate my entire lifestyle. Especially considering that we live in a world now where we have so many options as far as guns are concerned, we don’t really have to. Back in the day, all you had at your disposal were big, heavy revolvers and 1911’s but nowadays, you’ve got guns like this little guy here (He holds up the LCP II).”

Colion believes that at the end of the day, having a .380 is “better than nothing. Whether it’s a .22, a .380, a .44 Magnum, whatever the case may be, it’s going to be better than nothing.” He adds that the .380 has a good reputation as a self-defense gun, and he mentions that the former governor of Texas used a .380 to kill a coyote when it attacked his dog as he was jogging a few years back. “He got the gun that fits his lifestyle, he was going for a jog, he needed something small, and so he took his Ruger LCP. I’ve even done that.”

Colion Noir admits it is not ideal. “I’m not going to lie to you and say, ‘this is all you need’, because there are a couple things you have to think about too. There are always trade-offs…when I carry the LCP II in my pocket, I don’t have a round in the chamber because there’s nothing covering the trigger guard.” He explains that if he has to use the pistol, he must rack the slide when he draws it. As he said, definitely not ideal. Colion acknowledges that there are pocket holsters, but he does not use them because it adds too much bulk in his pocket. He admits it’s a trade-off and he will have to rack the slide to get a round in the chamber, and that’s just the reality of it.

The LCP II is Colion’s “Going to the mailbox” gun; his “Sometimes I take it running” gun. He uses a different gun for going out, and yet another kind as his bedside gun. In short, it “depends on what your lifestyle requires”, and he uses different tools to suit the task that he has at hand. Seems like a sensible approach to me, picking the right tool for the right job. He admits that he knows people who carry the LCP .380 as their full-time defensive pistol because it fits their lifestyle.

“At the end of the day, what it boils down to is, a gun that you always carry with you all of the time is going to be better than the biggest gun that you leave at home.”

I do largely agree with that statement; it’s true that a gun left in your house or vehicle will do you no good if you’re out and about and need a gun. Naturally, if you need a gun, you need one very badly.

Conversely, I also believe that if you’re going to choose to carry a gun, at least carry one that is effective. For me, a .380 as a full-time carry gun is wholly inadequate. It’s just not the most effective caliber out there, being inferior to the 9mm and the .38 Special. I’d carry a .38 Special before the .380; in fact, I do! Yes, it’s a personal preference thing, but it comes from years of research.

Why am I not cheerleading for the .380ACP? Because its ballistics really aren’t great at all. The projectiles are light, they don’t penetrate very well, and the velocity is somewhat low. Against someone who is wearing heavy winter clothing, the penetration is even more abysmal.

Unfortunately, there are people who haven’t done any research and believe that carrying a .380 is completely adequate and will solve any problems that they might happen upon, and that is just not reality.

It’s one thing to carry a pistol fully realizing its limitations, but to do so out of ignorance is…well, less than ideal (we keep using that phrase, don’t we?). But when we come full circle, at least they have something with them, and I guess that’s half the battle.

This is a good video overall, it brings what might be a new perspective for certain shooters and is well narrated by Colion Noir. It’s not long and Colion does not belabor the issue, yet communicates it clearly and thoughtfully.