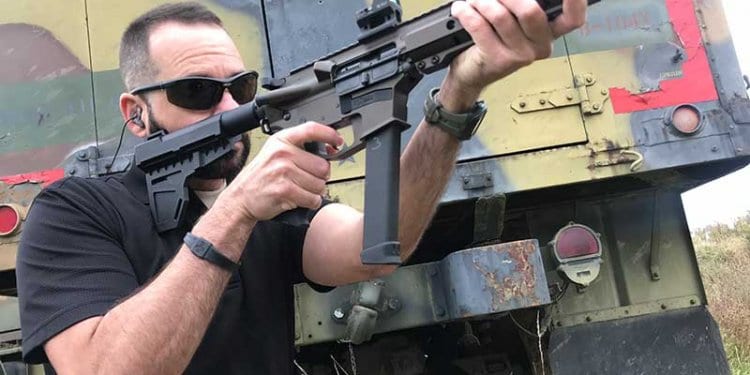 Pistol caliber carbines, especially those with an AR style configuration, have become quite popular. It is easy for me to understand why. They can be easy shooting guns with ammunition that costs a fraction of what normal centerfire rifle rounds cost. Most ranges that prohibit rifles will still allow pistol caliber carbines.

However, pistol caliber carbines are not without their own set of problems. Though the felt recoil on a 9mm rifle is much less than that of a .308 Win, it can still be more than the average shooter might expect. This is because most pistol caliber carbines use a straight blowback design. In this action type, the only thing that stops the reward motion of the bolt during recoil is plain old mass being driven back into your shoulder. Other designs can use up some of that energy and reduce the felt recoil.

As I stated above, the MkG line uses a delayed blowback system. In this system, CMMG uses a bolt that rotates due to a chamfer that interfaces with the barrel extension. As the gasses from the fired cartridge push backward, this causes the bolt carrier group to begin a rearward movement. The bolt begins to rotate, slowing the rearward motion and eating up some of the energy. Once the bolt completely unlocks, the BCG moves rearward like a straight blowback design, but with much less velocity. This means the BCG does not need additional weights like a typical blowback pistol caliber carbine, and less force hitting your shoulder.

CMMG opted to run the MkG Guard 9mm with Glock magazines. The guns ship with a 33-round Glock magazine that was originally developed for the Glock 18 machine pistol. Many people like the ability to share magazines between their pistol and rifle, so this makes a good match. I keep a holstered Glock 19 and rifle available for home defense, so having one set of spare magazines to feed both guns can make sense.

As with many of the CMMG introductions, the company is ready to go with a broad selection of configurations. These include pistol, carbine and SBR models. The basic carbine with an A2 style grip and M4 style stock carries a MSRP of $1,299. At the higher end of the line is a rifle with a Geissele SSA trigger, Magpul furniture and other fancy bits for $1,599. Of course, your local dealer sets the actual sales price.