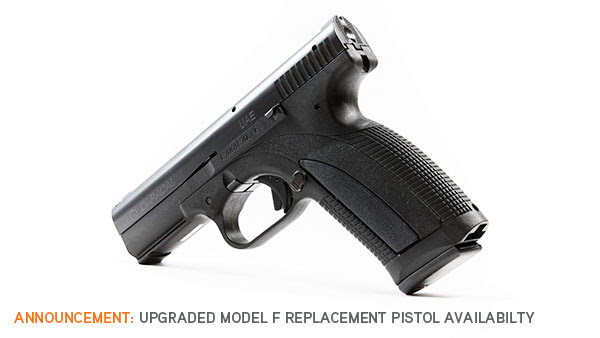 The first domestic pistol from the UAE to land stateside initially made waves for its great ergonomics and similarity to the Steyr M-A1. But after a few months, a Caracal Model F recall was issued because of a design oversight… now, some three years later, the upgraded recall-friendly pistols are back.

If this seems like an inordinate amount of time to wait for a recall, that’s because it is. Automotive recalls are normally accomplished in a few days if not hours at a local authorized dealership. Unfortunately, firearm components aren’t treated the same way most imported goods are — they’re subject to dozens of strict import laws and are often held up in customs for months, year,s or even indefinitely.

But the official recall only dealt with a minor component, the drop-safety mechanism. So shouldn’t it have been a quick fix to simply recall all affected designs and install a new one? Maybe even one produced here in the United States to avoid any importation issues.

Well, yes it would have been. At least if the only issue with the design dealt with the drop safety.

Truth be told, many users complained of cracked slides. Before you start grabbing pitchforks and torches, it’s important to understand that other major gun-makers have encountered the same problems in the past. Hell, the Beretta-built M9 initially had problems with cracked slides. So pervasive was this issue, that the M9’s design was simply altered around the problem to make sure that when the catastrophic failure occurs, it doesn’t maim or injure the shooter.

Personally, I’m happy to see the design return — it’s a great handgun with solid ergonomics whose slim frame fits most shooters. Plus, the trigger is excellent for a stock, striker-fired pistol. But let’s get back to the news about the replacement parts.

The Caracal Model F has been subjected to upgrades including a redesigned trigger safety, trigger bar, firing pin unit and a machined one-piece Multi-Function Unit (MFU). These enhancements increase both the safety and durability of the Model F pistol, while maintaining the same overall ergonomics and exterior aesthetics.

If you are a customer affected by the previous Caracal Model F and C product recall and have opted to trade your Model F and/or Model C pistol for a Model F replacement pistol, please contact the recall center at [email protected] or by phone at (208) 323-8727, Monday – Friday, 8AM to 5PM MST.

Well, that’s great news to hear that they’re moving customer service operations to the US — it should greatly streamline any issues or concerns gun-buyers have in the future. The question remains: can the Caracal pistol can still compete in a polymer-framed pistol market that has grown and evolved around improved ergonomics and trigger-pull in the three years it was absent? I guess we’ll have to check out SHOT Show 2017 to find out.