The United States Supreme Court’s Bruen Decision continues to reshape firearms law. What began as a challenge to New York City’s draconian carry laws is proving to have lasting nationwide consequences. The latest ruling comes from the United States District Court in West Texas, and it strikes at ATF Form 4473.

Specifically, Federal Judge David Counts has ruled that US Code § 922(n) is unconstitutional. Okay, so what is US Code § 922(n)? That’s the law saying that anyone under criminal indictment for which a judge could imprison them for more than a year cannot legally buy or receive a firearm.

The question on Form 4473 reads: “Are you under indictment or information in any court for a felony, or any other crime, for which the judge could imprison you for more than one year?” If you answer in the affirmative, then you cannot purchase a firearm. Judge Counts says that is unconstitutional. But why now?

Jose Gomez Quiroz was indicted for burglary in June of 2020. He skipped bail and was later indicted for that and failing to appear in court for the first charge. In late 2021, while those charges were pending, Quiroz attempted to buy a .22 caliber pistol from a gun store. He answered “no” to the question about whether he was under indictment.

NICS delayed him, and still had no response after seven days. By law, Quiroz was able to then take possession of the handgun. A few days later, NICS informed the ATF that Quiroz had lied on Form 4473, thus making his purchase illegal.

The feds charged Quiroz with making a false statement during the purchase of a firearm under § 922(a) and the illegal receipt of a firearm by a person under indictment under § 922(n). A jury convicted Quiroz on both counts.

Bruen, Heller, and the Second Amendment

Justice Antonin Scalia wrote in the 2008 Heller Decision that “Constitutional rights are enshrined with the scope they were understood to have when the people adopted them.”

Justice Clarence Thomas emphasized and expanded that idea in Bruen: “[W]hen the Second Amendment’s plain text covers an individual’s conduct, the Constitution presumptively protects that conduct. The government must then justify its regulation by demonstrating that it is consistent with the Nation’s historical tradition of firearm regulation. Only then may a court conclude that the individual’s conduct falls outside the Second Amendment’s ‘unqualified command.’”

Basically, Thomas wrote that any gun regulation falling outside the Second Amendment’s plain text must adhere to the historical traditions regarding firearms restrictions in the United States. The question in this case then became, “does the United States have a historical tradition of denying firearms to persons not convicted of a crime and, if so, from where does that tradition come?”

I won’t cover all of Judge Count’s historical assessment, but his methodology is important. He examined American gun laws back to the Bill of Rights’ adoption in 1791. He looked at English Common Law, from which US law and the law of 49 of the 50 states evolved. Louisiana state law derived from Roman Law, thanks to the state’s French heritage. England has a long history of denying firearms ownership to citizens deemed undesirable, whether from criminal activity or just observing the wrong Christian rite.

The judge talks about the 1795 Massachusetts Surety Law, which the US Government uses to justify some restrictions. The Surety Law required any person “reasonably likely to ‘breach the peace,’ and who, standing accused, could not prove a special need for self-defense, to post a bond before publicly carrying a firearm.”

Note that the law did not bar such from possessing firearms. They posted a bond insuring good behavior while carrying in public. Justice Thomas pointed out that such laws were not punishment. In addition, history shows that the laws selectively targeted black people. Judge Counts rejects the government’s use of the Surety Laws in support of § 922(n).

Similar laws throughout the 19th century followed a like pattern. Stripping an individual of his firearm could be a death sentence to anyone not living in or close to a city, whether it be because of no protection or the inability to feed oneself.

The Federal Firearms Act of 1938 (FFA) represents the first time that individuals under indictment were barred from receiving a firearm. Specifically, the FFA prohibited “individuals under indictment for, or convicted of, a crime of violence from shipping or transporting any firearms or ammunition in interstate commerce.” “Crimes of violence” was commonly understood to only mean crimes committed using a firearm. Judge Counts notes that the FFA’s primary goal was to “eliminate the guns from the crooks’ hands, while interfering as little as possible with the law-a-biding citizen.”

Congress amended the FFA in 1961 to include “all individuals under indictment, regardless of the crime they were accused of.” They also changed the “crimes of violence” language to “crime punishable by imprisonment for a term exceeding one year.”

The Gun Control Act of 1968 (GCA) defined “indictment” to mean an indictment in any court, not just a federal court. The 1986 amendment to the GCA combined all prohibitions against indicted individuals to its current form under § 922(n).

Judge Counts ruled that government attorneys have not demonstrated a historical tradition denying receipt of a firearm to a person under indictment. Congress reached that prohibition gradually, and it did not begin until 1938, 147 years after the Second Amendment’s adoption.

The Judge’s Conclusion under Bruen

The Second Amendment is not a “second class right.” No longer can courts balance away a constitutional right. After Bruen, the Government must prove that laws regulating conduct covered by the Second Amendment’s plain text align with this Nation’s historical tradition. The Government does not meet that burden.

Although not exhaustive, the Court’s historical survey finds little evidence that § 922(n)—which prohibits those under felony indictment from obtaining a firearm—aligns with this Nation’s historical tradition. As a result, this Court holds that § 922(n) is unconstitutional.

It is therefore ORDERED that Defendant’s Motion to Reconsider is GRANTED. (Docs. 73 and 74). The indictment is DISMISSED.

So, what does this ruling mean?

Honestly, I’m not sure. The immediate effect, obviously, is that the judge overturned Quiroz’s federal convictions. The decision also means that the government cannot deny an individual’s right to receive or own a firearm without an actual conviction. Going forward, I’m certain the government will appeal the decision to the Fifth US Circuit Court of Appeals. If they lose there, it will almost certainly go to the Supreme Court, which may or may not take it up. That process could literally take years

In the meantime, the ATF may change the 4473 or they may seek an injunction pending the outcome of the appeals process. I think the latter is more likely. The Court may or may not grant that injunction. Right now, we just don’t know.

Jose Gomez Quiroz doesn’t sound like a nice guy. He sure doesn’t sound like someone I’d want carrying a gun, even a .22. But he was not yet a convicted felon when he bought that gun. Quiroz kicked over a hornet’s nest for sure. Other challenges to 4473 restrictions may well surface under Bruen’s history and traditions requirement. It sure wouldn’t surprise me if the marijuana question was next.

We’ll just have to see. One thing is certain: the Bruen Decision has crashed the gun control party. Where it goes from here is anyone’s guess, but I expect we’ll be watching the fallout for years to come.

If you’d like to read all of Judge Counts’ analysis, you can find it at courtlistener.com. I found it fascinating, but I’m a nerd like that. 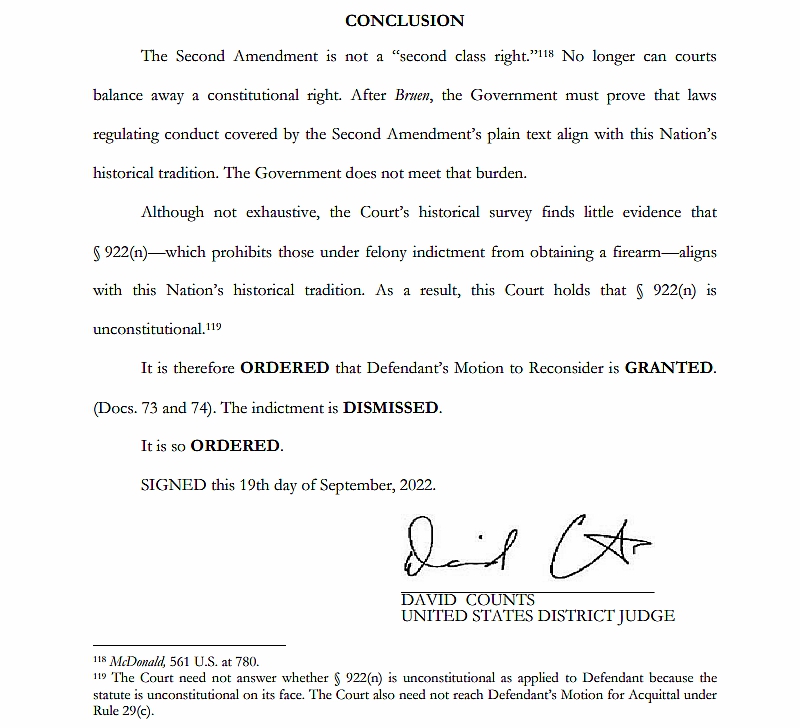