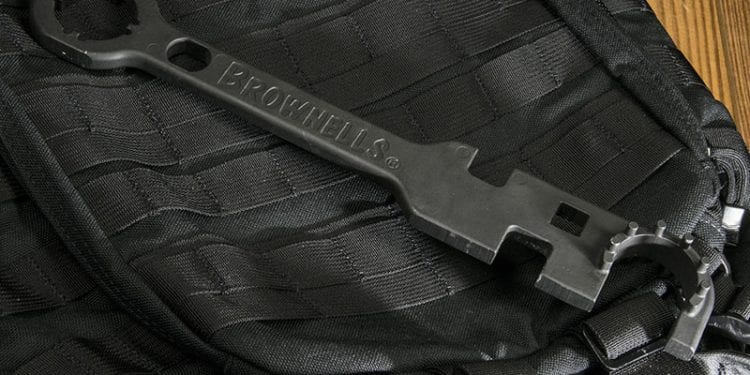 For most of us, the thought of an AR-15 wrench conjures images of a grey, speckled metal tool that most of us never use more than twice. Hell, in a lot of ways, the armorer’s wrench is like a plumber — you rarely need one, but when you do —you REALLY do.

To be honest, after building a handful of AR-15s, and helping others do the same (and subsequently loaning them my wrench) I never gave the heavy metal bludgeon another thought — until I broke one.

I forget which rifle I was working on, but a friend of mine had an AR with a barrel so thoroughly encrusted with carbon, junk, and God-knows-what-else, that he called me for assistance.

Admittedly, I laughed at and mocked him for his ineptitude initially, feeling secure in my superior gun-building abilities. But once he showed up at my place with the ultra-cruddy receiver in band-aid-covered hands, I grew nervous. So we headed out to my shop, and tossed the stubborn thing into a receiver block, tightly secured in a vice, and removed the gas tube.

Once inside the receiver block, attempts to remove the barrel were unsuccessful. The amount of torque required was so intense, that I stopped after a moment to check for a blind-welded pin. After not seeing any, we decided to warm up the barrel with a torch on low and use a cheater bar for extra leverage.

With everything in place, I managed to rotate the wrench roughly 15 degrees before I heard a pop, and my cheater bar slammed into the garage floor. My initial delight at having broken the barrel free was replaced with confusion after having sheared off two pins from my armorer’s wrench.

While the exact words escape me, I believe I muttered something profound like, “Huh?”.

Sure, it’s common sense that any tool can break, but having never seen one destroyed, I was kind of impressed. Undeterred, I decided to buy a new one and try again.

I navigated to the Brownells website to see if they had any deals on wrenches, and that’s when I learned something new — that they make their own AR-15 armorer’s wrench.

The wrench retailed for nearly $60, so I was a little skeptical — how much better could it be than the old wrench I bought years ago, for around $20?

That’s when I realized my grandfather’s saying about time making liars of our memory was remarkably accurate. That old wrench I remember being so cheap was nearly $40, and nearly every one I found online had mixed reviews. Some were made in China out of cast zinc, while others were coated steel or aluminum.  So instead of risking another wrench or broken AR component, I decided to drop a little extra dough, and buy Brownell’s own AR-15 Armorer’s Wrench.

It’s built from 4140 steel, and is coated in a stupidly durable manganese-phosphate finish resulting in an all-business, matte black finish. This immediately clued me in that durability was the name of the game with this hefty steel tool.

Another indication is that the two-pin barrel-nut-remover setup of traditional AR-15/M-16 wrenches is replaced by six pegs that cover 180 degrees of the nut. This was exactly the type of over-built design I was looking for to remove that stupid, stubborn nut. What’s more, the pegs work with either the fully-enclosed or traditional type barrel nuts, so you don’t have to mess around trying to get a pin-wrench to fit. Plus, the back of the wrench features a slot for installing mil-spec receiver extensions, and a four-slot wrench head for tightening the castle nut on M4-type rifles.

Impressed with the wrench’s quality, my buddy and I headed back out to the workshop and attempted to liberate the barrel nut from the receiver. It took some serious effort, but the nut finally came free, and we discovered the additional reasons behind its tenacious resistance.

Nearly zero moly-grease had been applied to the barrel nut before installation, and the previous user had applied some sort of baked-on Duracoat knock-off over the nut. That combination basically glued the nut on both the inside and outside.

The thing that really surprised us both, is that the wrench barely showed any signs of use, despite being treated like a rented mule. So while I’m not certain how scientific this review of the wrench is, I can safely say it’s negligent idiot-proof, and its overbuilt nature makes working on even the dirtiest, most neglected rifles, much easier.

Check out the gun maintenance tools over at the warehouse.