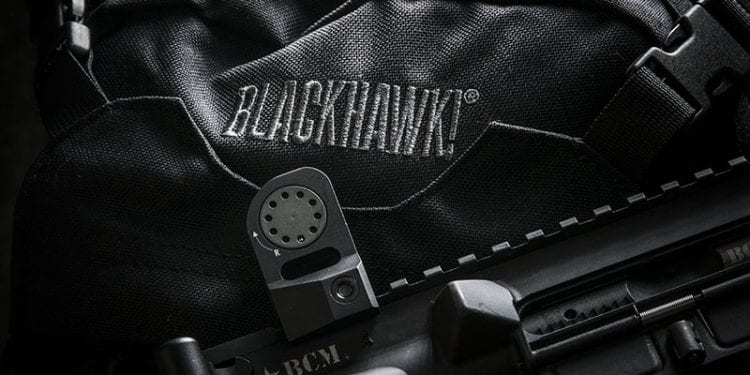 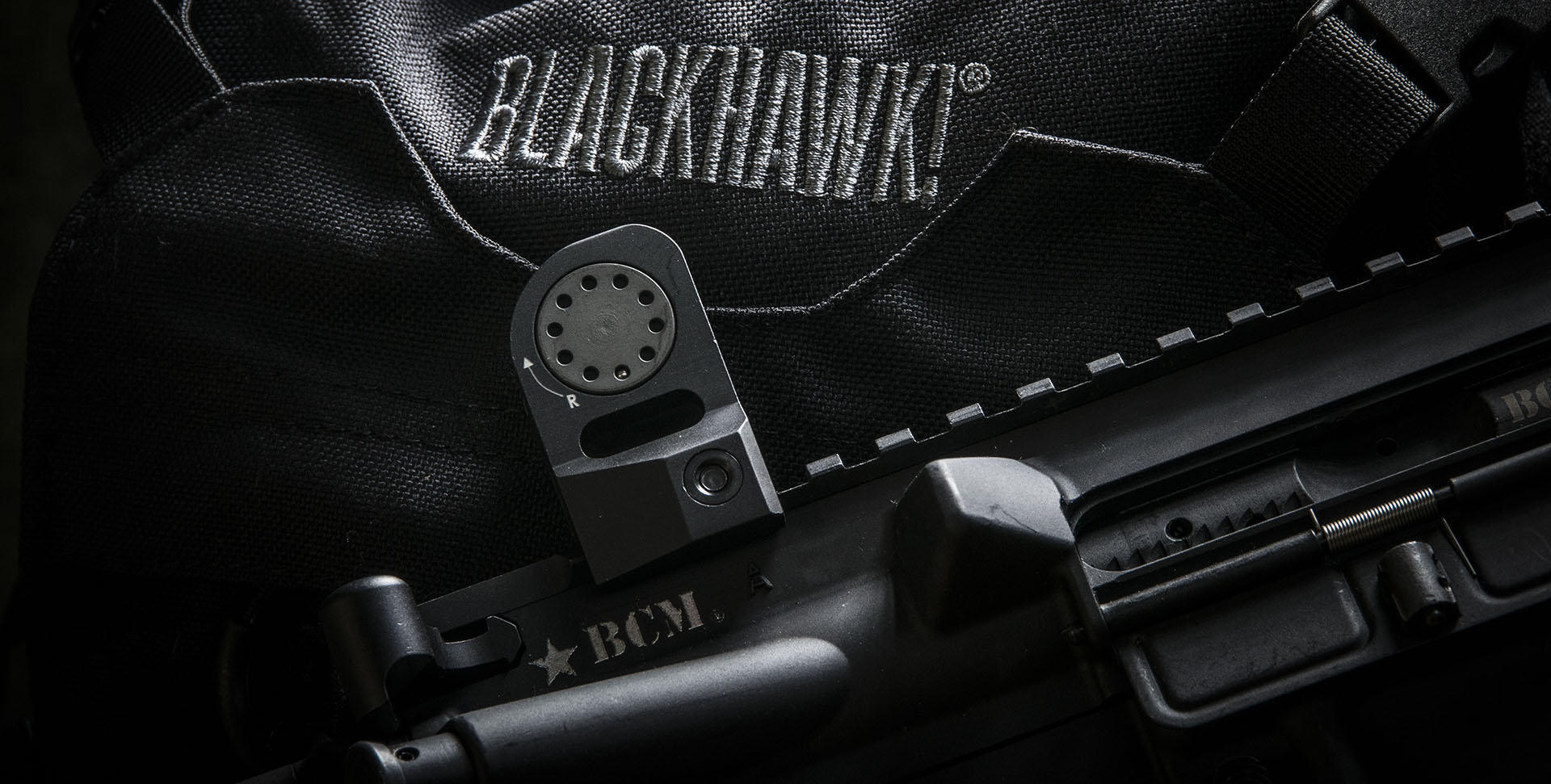 When I bought my first AR15, it came with a fixed carry handle and a match-grade heavy H-BAR barrel. It was crazy accurate, unreasonably heavy and deviated away from one of the greatest advantages of the AR15 over other designs – modularity.

Sure, I could have replaced the upper with a flat-top one, but since I purchased my first gun while still in college, funds were very tight. I loved that gun, but always felt like it was holding me back since I couldn’t easily mount optics that wouldn’t require an awkward cheek weld.

So, a few months later when my buddy traded me his Bushmaster M4A3 clone with a removable carry handle, I was beyond excited to equip it with the latest and greatest optic on the market. I mulled around about the price and bought a Tasco that I successfully used to place decently in a local IPSC match and win myself an EOTech holosight.

I was so excited for my new optic, and felt like Billy-badass with my military-grade holosight – until I saw photos of operators overseas. Sure, some of them were using my beloved holosight, but they all had something I didn’t – backup iron sights.

This was back before Magpul made their inexpensive BUIS, so everything I saw was at least a $100 – not exactly affordable for someone living on Ramen noodles. I finally bit the bullet and bought myself a nice folding rear BUIS. Even though this sight was around $150, it didn’t feel half as sturdy at my old carry handle sight. This lead me to the conclusion that if I ever built another AR, I’d run it with a solid, fixed rear iron sight.

To be honest, I had forgotten about that event until recently, when I was looking at building a super lightweight fighting rifle. Something handy, accurate and virtually soldier-proof. While this piece simply doesn’t accommodate the exhaustive list of upgrades/accessories I performed or added, it does provide the perfect place to discuss the fixed rear iron sight that I ended up choosing: the Blackhawk! Fixed backup iron sight.

I’ll be honest, at first glance I was skeptical of the little BUIS. Not because it doesn’t look robust, or functional, but because of its simplicity. The sight is only adjustable for windage, and that adjustment is in the style of an M16A1 sight.  In practical terms, this means a shooter needs either a sight adjustment tool or a bullet to change the windage. 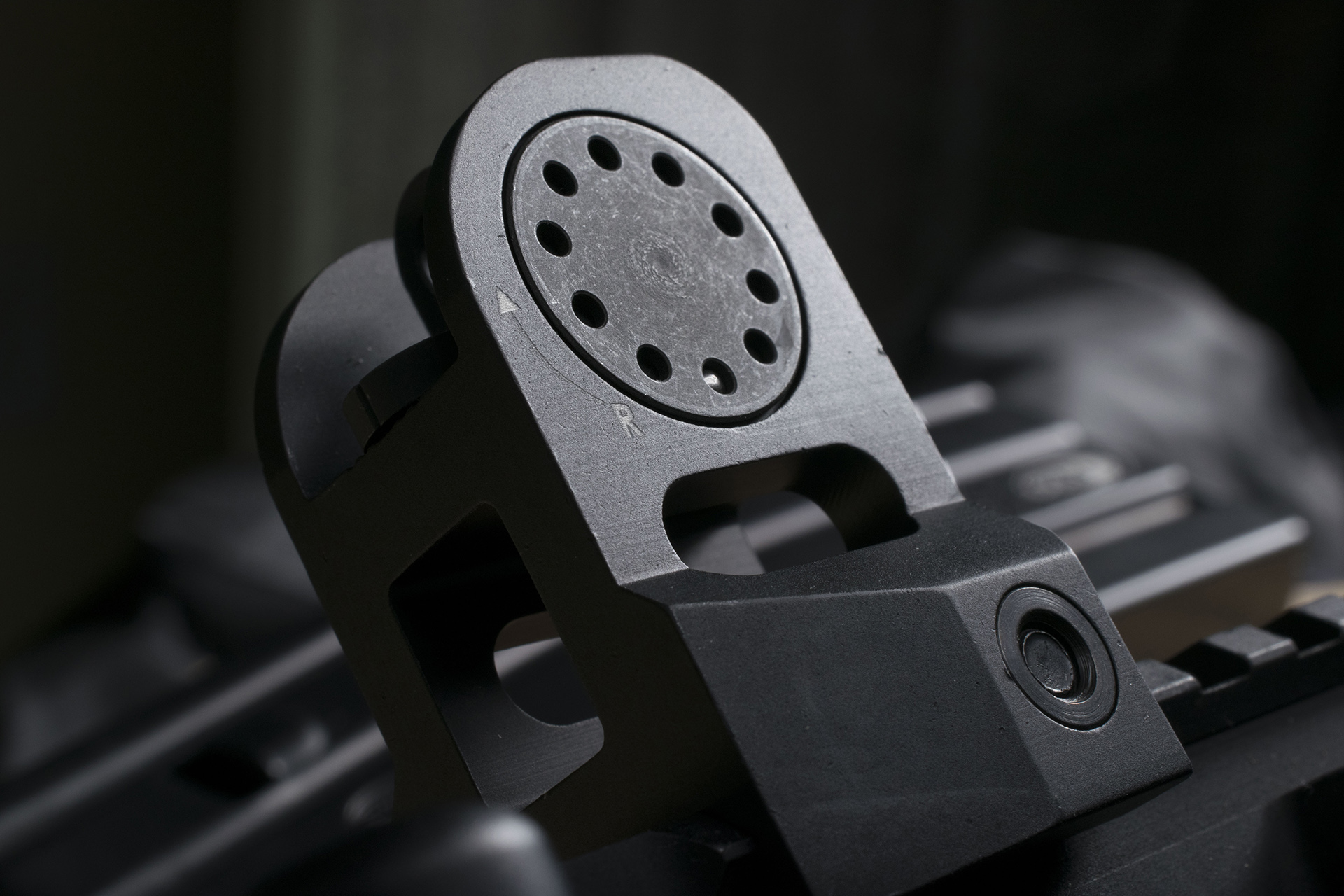 The windage wheel is located on the right side of the rear sight housing, and consists of a screw connected to a light-gray aluminum wheel with ten holes set at 36-degree increments. It’s held in place by a spring-loaded pin captured by the wheel itself.

As the wheel turns, the threaded aperture unit moves left or right, and shifts its location accordingly. This shifts the point of aim by changing the alignment with the front sight post.  Because the rear backup sight isn’t adjustable for drop, the front sight post must be adjusted accordingly to obtain a proper zero.

That said, most shooters don’t change their zero once set, unless they change ammunition or are shooting at varying distances. But this is a backup iron sight, emphasis on backup. It’s not meant to be used as a primary aiming device, but could easily serve in that role.

So, it makes since that it lacks some of the refinements of national match rear sights that have 1/8 MOA adjustments. In fact, the 6061-T6 aluminum backup sight is only adjustable in half minute of angle increments. Meaning, at 100 yards, each click will shift the impact of the round by half an inch – at 200 yards, one inch etcetera.

Despite this simplified setup, the sight retains the dual-aperture setup on regular iron sights for the AR15/M16 rifle: one large aperture for close quarters shooting, and a smaller one for finer aiming at distance.

I tested the sights on three separate firearms to see how it held up to different amount of recoil, and if it retained zero when being removed and remounted on the same gun.

The first test rifle was my Bravo Company Machine (BCM) M4-type carbine designed to closely replicate the C8 carbine from Diemaco / Cold Canada. This carbine is chambered in 5.56mm NATO standard ammunition, and is the target firearm the Blackhawk BUIS was designed for.

The previous rear sight I had used was adjustable for elevation, and needed that feature to properly obtain zero at 100 yards. The Blackhawk BUIS lacks that elevation adjustment, but was thankfully within a quarter inch (elevation wise) of factory point of aim. Windage was another story.

Windage was roughly eight inches left of point of impact at 100 yards with the factory setting while using 55 grain Winchester NATO-spec ammunition. Since the Blackhawk BUIS adjusts in half MOA increments, I had to rotate the rear sight wheel 16 clicks to the right. 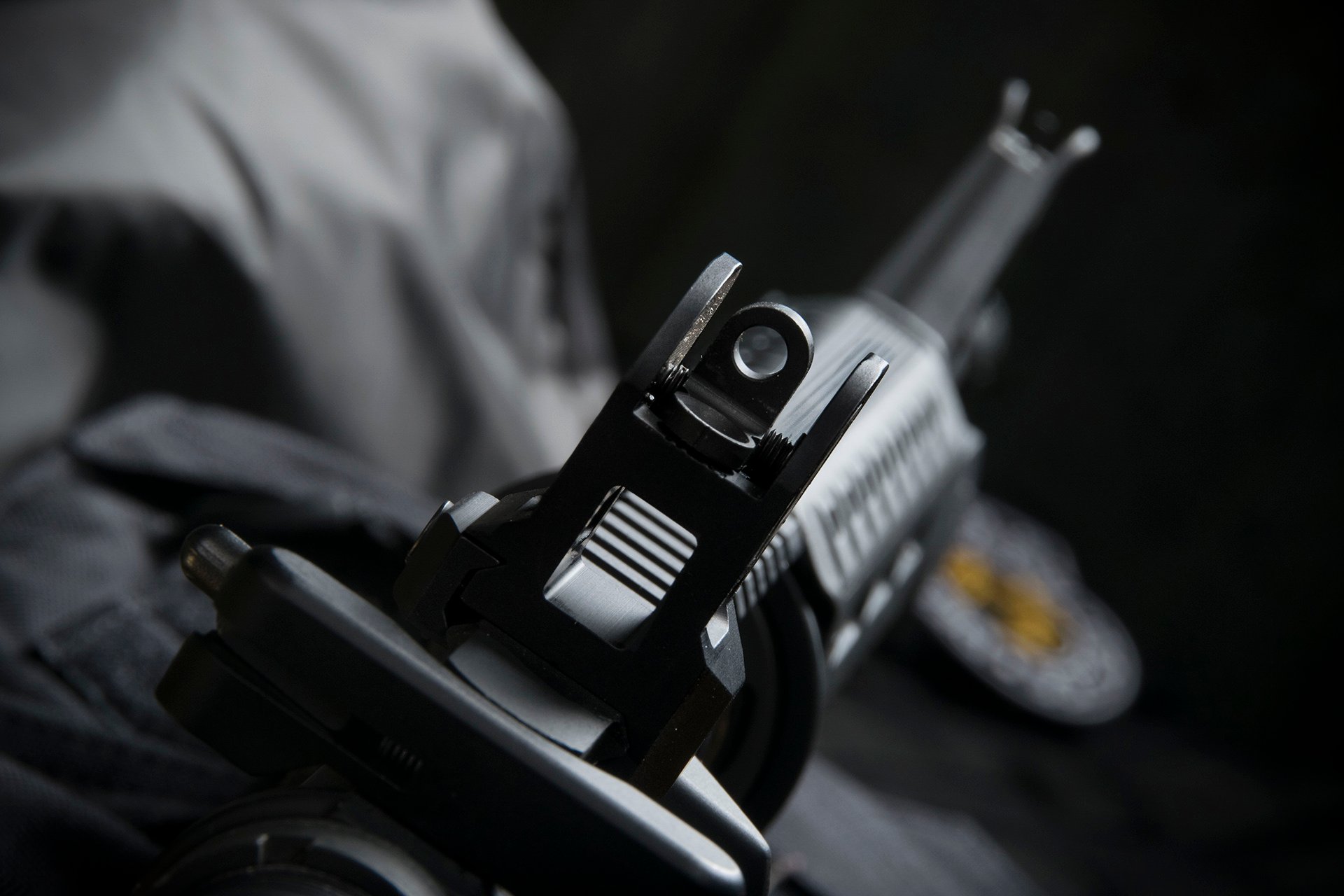 Once I did so, the sights seemed accurate enough to engage 3-inch targets at 100 yards with 100 percent accuracy – provided I did my part behind the trigger. I then removed the backup iron sight, mounted on my second rifle – a CMMG SR25 clone – and fired two magazines through the gun.

This CMMG is chambered in .308 Win – a cartridge with substantially more recoil than 5.56mm. I did this to try and upset the zero of the rear sight. Upon re-mounting this sight on the M4 carbine, I found no perceivable shift in point of impact. 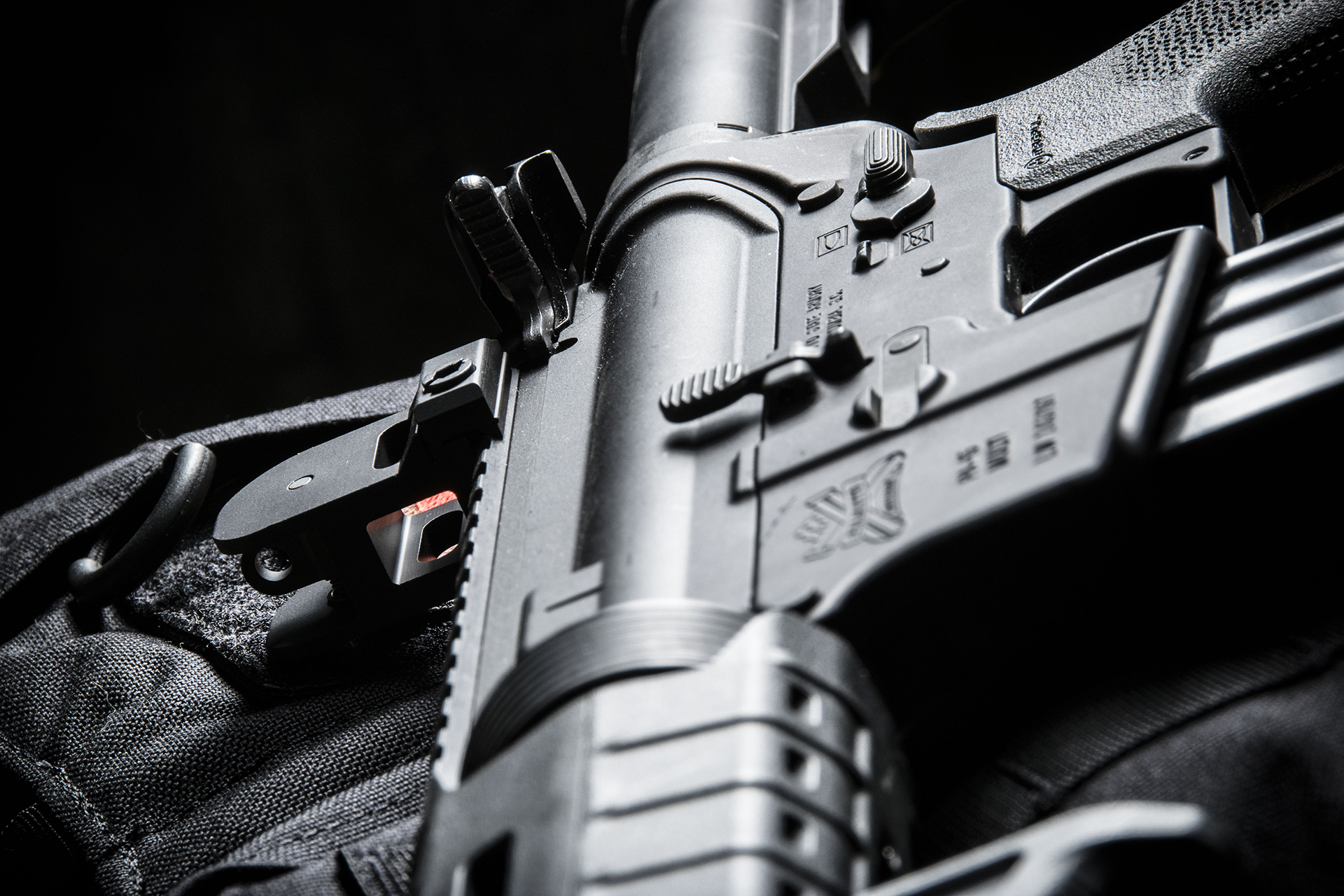 Lastly, I mounted the sight assembly on my VEPR 12 shotgun, and again fired off two magazines of ammunition. For this test, I only fired heavy, defensive ammo to increase the recoil impulse as much as possible. While my shoulder was sore after the slug/buckshot combination, the sight held zero perfectly.

One final attribute to mention – the BUIS from Blackhawk is Mil-Spec height, so it works perfectly with any standard-height front sight tower. This also means it perfectly cowitnesses with optics designed to do so with Mil-Spec irons. Optics like Eotech’s 552 series and EXPS 2 series of holosights.

Overall, this simple, rugged rear sight may not win any awards for most gizmos or features, but it’s the kind of iron sight that will put up with heavy abuse and serious recoil no problem. The only thing I’d like to see, is this same sight in an FDE color for SCAR rifles.