The Beretta 1301 Tactical is arguably the best semi automatic shotgun currently available for home defense and tactical applications. It only weighs 6.35 lbs and has a rather short OAL of just 37.8 inches which makes it shorter and lighter than your stereotypical AR15.

But no gun is truly perfect out of the box. Adam of Aridus Industries has turned his attention to upgrading the Beretta 1301 Tactical. He first started with his Quick Detach Carrier. The QDC is a rigid detachable side-saddle. It holds 6 rounds and the carrier fits easily into AR-15 mag pouches.

Next Adam addressed the elephant in the room, which is the bolt release latch. If rearward pressure is applied to the latch, this releases the shell stop in the magazine tube. This results in shells dumping into the receiver and causing a rather serious malfunction that makes the 1301 come to a screeching halt.

The YT-1301 is a latch and shroud to be used with the Beretta 1301 in order to address the potential of the catastrophic shell dump malfunction. When the factory latch is pivoted rearward, it activates the shell stop, releasing multiple shells into the gun’s receiver and locking up the action. The shroud, originally conceived by Tom Jones of pistol-forum.com and redesigned by Aridus Industries, covers the rear of the redesigned latch to prevent rearward actuation from accidental bumps.

Adam didn’t just stop there. He also developed the CROM, a cowitnessing optic mount to replace the rear sight/rail on the Beretta 1301 and providing you with a co-witnessed sighting system.

The Co-witness Ready Optic Mount (CROM) is a mount for attaching an Aimpoint Micro (H1, T1, H2, T2) to your Beretta 1301 Tactical Shotgun. The CROM replaces the factory plastic rail and rear sight and directly mounts the optic to the shotgun’s receiver. This allows the optic to sit much lower, providing a consistent and proper cheek weld.

The CROM utilizes an XS rear ghost ring that is adjustable for both windage and elevation. This gives you the ability to co-witness the rear ghost ring and the factory front sight, allowing an emergency backup sighting system in case of optic failure.

The most recent project Adam is working on is addressing the stock furniture on the Beretta 1301. He made an adapter that will allow you to use a Magpul SGA Mossberg stock onto the 1301. He adapted a Magpul Zhukov AK handguard to fit onto the Beretta 1301. 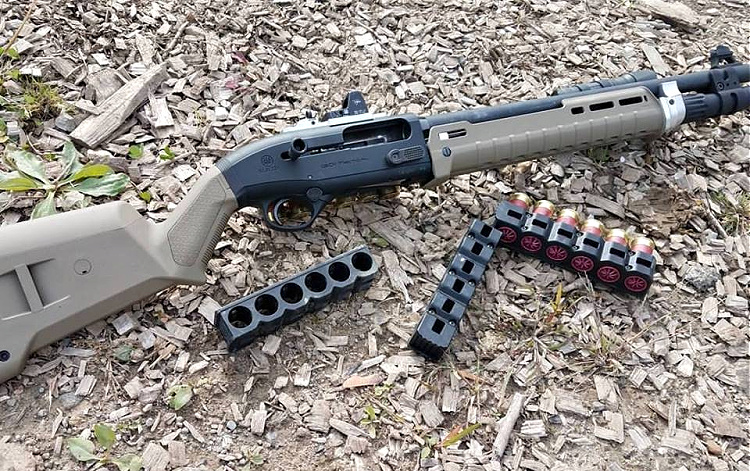 The one downside to the Beretta 1301 is the handguard and limitations in adding lights. Most use some form of mag tube rail clamp design but with the use of the Zhukov handguard, you have more options to add accessories like lights and lasers. Unfortunately, the Zhukov handguard is only in the prototype phase and due to the amount of modification and inherent cost of the Zhukov handguard, it is unlikely they will be mass-produced. However, Aridus Industries rumors say he is working on a handguard design for the 1301.