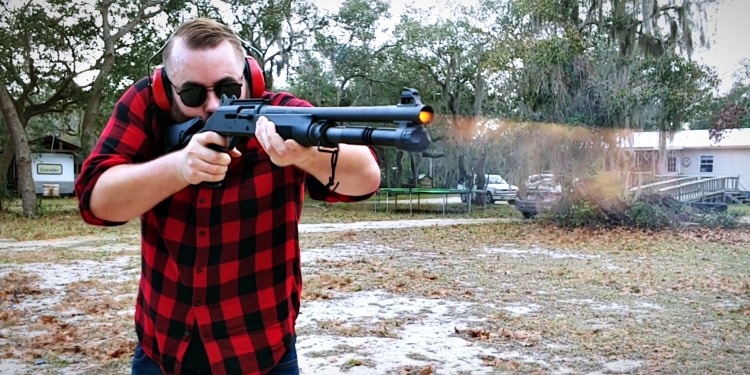 As much as I like shooting, writing about, and exploring cheaper options for home and self-defense, I can’t lie and say I don’t like my more expensive guns too. We call our cheap but sufficiently usable guns, Ramen Noodle guns. When we go to the complete opposite side of the price spectrum from Ramen Noodle guns, we get Filet Mignon guns. Our first filet mignon gun is going to be the Benelli M4.

The Benelli M4 is most likely the best combat shotgun created to date. As far as combat shotguns go, it was purpose-built for tactical use, which makes it a rarity. Your typical tactical shotgun is a system derived from a weapon originally meant for sporting use. The Benelli M4 was designed from the ground up to fit a specific requirement for a military contract. Way back when in the late 90s, the military went looking for a modern semi-automatic shotgun with specific requirements.

Benelli already had a reputation for making finely tuned shotguns, but the military’s requirement called for a weapon that could reliably operate when weighed down with heavy night vision and thermal optics. Benelli made inertia driven shotguns and inertia driven guns are picky when weighed down. Gas operated guns are not so picky. So Benelli made a gas gun, and it became the M1014 Joint Service Combat Shotgun.

The Benelli M4 is a gas-operated gun, but the gas system was a new creation by Benelli. The Benelli M4 was the first gun to use the ARGO gas system. ARGO stands for Auto Regulating Gas Operated. The ARGO system is a short-stroke piston-driven system that uses two pistons that directly contact the bolt. This system gives you a rapid cycling gun that minimizes vibration.

The gas port is placed further on the barrel than most semi-auto shotguns. This means the gas system uses hotter and cleaner gas, which results in less fouling and cleaner operation. This system reduces some of the major issues with gas-operated guns.

Ergonomics of the (other) M4

The Benelli M4 is a mix of Great, Okay, and sometimes Terrible ergonomics. Let’s start with the Terrible part, and it’s one small part.

In fact, that’s the problem. It’s a small part.

The bolt lock release is ultra-small, way too small for a tactical shotgun. This is a problem that plagues most shotguns, and it’s one that only Mossberg’s 940 JM PRO has seemed to address from the factory. It’s the first upgrade that’s a necessity for the gun.

The Okay portion of the gun’s ergonomics is the charging handle. The charging handle is on the right side and not reversible. This is another common issue on semi-auto shotguns. Making it reversible would make it much easier to charge while keeping your firing hand in place.

Benelli’s M4 shotgun was the first to use the Auto Regulating Gas Operated (ARGO) system.

The Great…well, that is everything else. The stock is mighty solid and offers plenty of room for a good solid cheek rest. The pistol grip is thick and gives you a rock-solid grip on the gun with an excellent means to control the weapon. The thick grip lets you hold it nice and tight while rapidly dispersing 12-gauge hate. If you like to use the push-pull method of recoil mitigation, this pistol grip gives you plenty to pull with.

The forend is placed to the rear a bit and does allow for a tight grip, and it’s placed close enough that you aren’t reaching too far forward in some crazy awkward manner. The Benelli M4 also has a wide loading gate and a friction-free follower that allows for rapid and smooth reloading. The ejection port is also sized perfectly for port reloading. 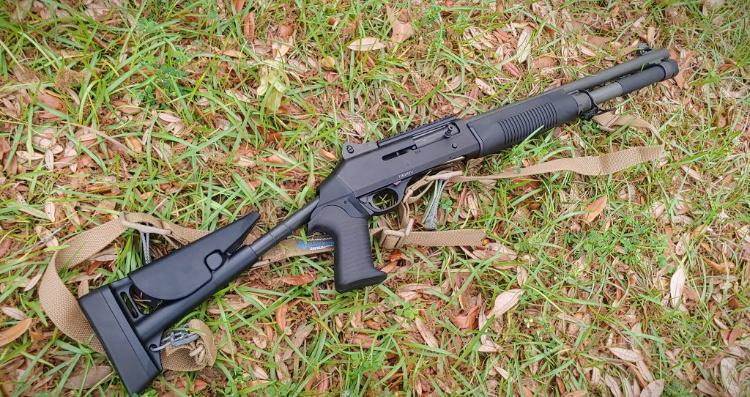 The M4 semi-auto shotgun’s bolt release is too small, but everything else is good go to – better than that even.

Range Time with the Lord Of Combat Shotguns

Hmm, I’m not going to lie, I adore the Benelli M4. It’s a ton of fun to shoot. It cycles almost everything, the only round it will not cycle is the Winchester AA reduced recoil sport loads. In all fairness, the 980 feet-per-second velocity ensures it doesn’t cycle in any semi-auto shotgun. The Benelli M4 is ridiculously reliable and eats up the cheapest birdshot you can toss at it. It also cycles reduced recoil tactical loads without issue, to include my favorite Federal FliteControl Reduced Recoil loads.

The ole M4 cycles rapidly and ejects consistently. With proper trigger manipulation, you can get the 5th shell out before the 1st shell touches the ground. The trigger is excellent. Light and crisp with a short reset. This combination of fast cycling action and light trigger makes it a mag dumper’s dream.

This “shottie” is a long way from the “trench gun” of the early days – though the efficacy of properly used 12 gauge has not.

The weapon runs like a clock, and I’ve yet to clean, or even oil it. The gun just eats and runs and eats and runs. The M4 has a reliable cycling system, and the low fouling design means cleaning isn’t something you need to do often.

That’s the biggest selling point of the M4 over other semi-auto shotguns. The M4 runs and runs and runs. It runs filthy dirty with carbon, or dust, or sand. It runs reliably and does so under extreme pressure.

The Benelli M4 disperses 12 -gauge quickly, and with the ghost ring iron sights, it does so accurately as well. The rear aperture is wide and allows for a quick sight picture for rapid engagement. In front of the rear sight is a section of Picatinny rail that allows you to mount your optic of choice. Optics on shotguns is a sour subject with many, but a red dot can do a lot of work on a shotgun.

The gun has very comfortable recoil, a benefit of gas guns, and muzzle rise is also quite tame. Double taps with a shotgun are rarely necessary, but it’s nice to have the capability to do so. The Benelli M4’s lower recoil makes it a ton of fun to shoot and incredibly controllable. It is imminently suitable for both tactical shotgun and defensive shotgun use. 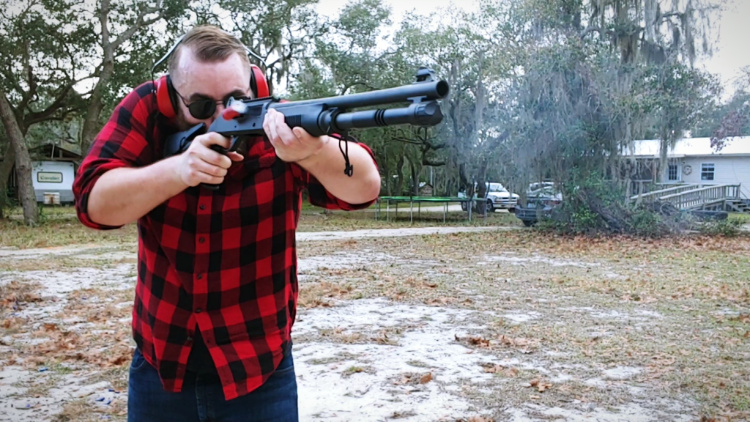 On the range with the Benelli M4 it’s not hard to understand why this breed was chosen to become the M1014 Joint Service Combat Shotgun.

The 18.5-inch barrel and 7.8-pound weight make it short, but a little hefty. It fits in an AR 15 case just fine. It balances well, and ultimately the weight helps shrug off a little recoil when it comes time to lay lead down. The Benelli M4 is ultimately very controllable and accurate and perfect for its role as a tactical shotgun.

The Benelli M4 has an MSRP of $1,999, and for a shotgun, that’s an extreme price. Hell, for a AR 15 that gets into the higher tiers. To many, the Benelli M4 is greatly overpriced, and it’s hard to see the value there. That’s understandable. The Benelli M4 is still a fantastic shotgun with an unbeatable record. If you’re a shotgun nerd like me, the juice is worth the squeeze, but it might not be for everyone.