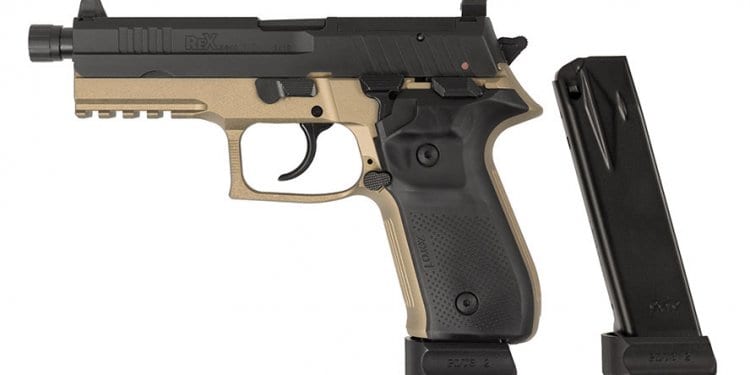 A new pistol, the Rex Zero 1T was recently introduced by Arex and will be offered in the United States through its importing partner FIME Group. The new guns are an extension of the existing Arex brand and are chambered for the 9mm cartridge.

Considered a “tactical” gun, the pistols offer a number of changes from the original Rex Zero 1. These changes include the use of a threaded barrel, inclusion of 20-round magazines and cutting the top of the slide so that a variety of red dot style optics can be used on the gun. Let’s go over these in a bit more detail.

The barrel is 4.9” long with a 1.5×28 thread pattern. It comes with a thread protector. For comparison, standard Rex Zero 1 pistols have a 4.25” barrel. The threaded barrel is obviously intended for use with a sound suppressor.

For that reason, Arex replaced the original sights with taller sights that are much more likely to extend above any 9mm silencer you attach to the pistol. As a bonus, the rear raised sight should allow for easy use during a one hand slide manipulation on a hard surface.

Of course, the attached sights are not the only way to aim the pistol. Arex cut the slide for mounting an optic. Included with the gun are four different mounting plates that allow you to fit a number of different red dot sights to the gun. Aimpoint, Trijicon, C-More, Meopta and Vortex are just a  few of the brands that are supported by Arex out of the box.

Original guns come with 17-round magazines, but this model ships with a pair of 20-round magazines. The mags to extend slightly below the butt of the gun. While this does little to enhance control of the gun when shooting – the grip is already full sized – they do allow for better malfunction clearing. Should you get a double feed in the gun, you will likely need to strip the magazine from the pistol to get it back in action. Having a broad baseplate allows you better grip on the magazine; that should make it much easier to pull out of the gun.

These guns are available with either a black or two-tone black and tan finish. Both carry the same suggested retail price: $869.99. This puts them fairly close in terms of price to the SIG SAUER P226 pistols that they resemble.

Special note: the magazines between the Rex Zero line and the classic SIG pistols are not interchangeable even though they look similar. If you have a stack of SIG P226 magazines, they will not work (without modification) in the Arex pistols.