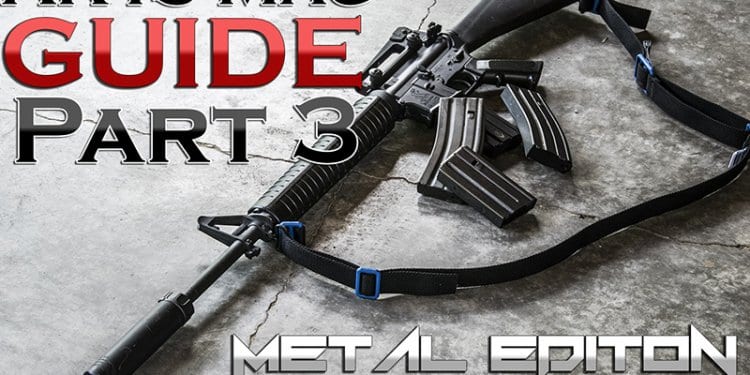 Throw up some Devil Horns, it’s time for part three of our, ‘AR-15 Magazine Guide’ — the Metal AR-15 magazines issue!

Metal magazines have gotten a bad rap as of late since industry giants like Glock and Magpul Dynamics have dominated the market for over a decade with their polymer prodigies. Not long ago, the words, ‘plastic’ and ‘cheap’ were synonymous. Now, every time a writer or company mentions plastic in their products, it’s referred to as high-impact polymer.

Don’t get me wrong, plastic or polymer magazines have distinct advantages over metallic ones, but metal magazines have their own perks that have been understated.

One advantage of aluminum or steel magazines over polymer ones is their longevity and user-serviceability. Ask anyone who has used and abused their magazines hard, and they’ll tell you that even the much-lauded Magpul PMAG will fail on occasion.

Because of the material’s elasticity and tensile strength, polymer magazines generally fail in only one way — they crack. Exposure to certain chemicals or varying temperature extremes can cause these mags to become brittle. Metal magazines, on the other hand, almost never crack, but they can dent fairly easily.

If they become dented, this can affect their ability to either properly lock up inside the host rifle, or to reliability feed rounds. This is more the case with aluminum magazines than steel ones. Thankfully when this occurs with either, the shooter can normally fix the mags by simply disassembling the mag, and bending the dents out.

Though personally, I wouldn’t bother unless you have to —magazines are consumable items.

But I digress, if you’ve got metal mania, check out these examples of metal AR-15 magazines available on the market today.

Despite their name, these mags are much better than just, ‘OK’.

Constructed of lightweight aluminum and available in 20-round and 30-round varieties, these mags have been in service for more than 40 years. In fact, Okay industries co-developed the original 30-round USGI magazine with the Army back in 1976.

Back then the magazines were a matte grey color and originally used traditional metal followers. Now, Okay Industries ships their SureFeed magazines in a corrosion-resistant, semi-gloss black finish, and the metallic followers are replaced by anti-tilt polymer ones.

While these mags aren’t as high-speed, low-drag as the latest and greatest from Magpul or Lancer, they are an affordable alternative and one that, if properly maintained, will outlast the shooter.

Only a few years ago Bushmaster was considered one of the top dogs in the AR-15 game. Because of this, Bushmaster of BFI sold incredible amounts of firearms and, you guessed it, magazines. 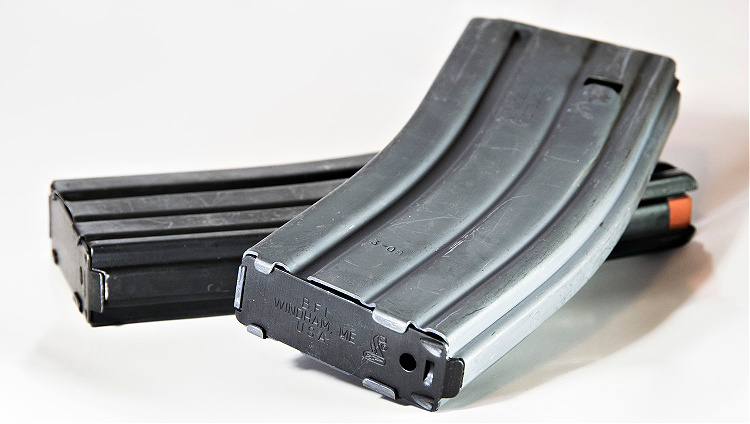 The standard Bushmaster magazine is a light matte gray-finished aluminum-bodied and available in an odd assortment of capacities and shapes. The 30-round versions look like any other STANAG 30-rounder, just with a gray finish.

Their reduced capacity models, however, are a bit different. Traditionally, 20-round AR-15 magazines are straight with an angled baseplate. They follow the original specs set forth by Armalite and the military back in the early days of the M16.

The overwhelming majority of AR15/M16 magazines on the market today are made from either polymer or aluminum. There are a few exceptions though. Two major military arms makers produce steel STANAGs, as well as a few surplus options, for the savvy buyer.

The first of which is the HK-pattern, SA-80 magazine. When the British military was struggling to get their L85 bullpup to run correctly, Heckler and Koch was contracted to fix the design. Among the myriad of upgrades made by HK, they also changed out the aluminum USGI STANAG shipping with the rifles to a more crush-resistant all-steel magazine. 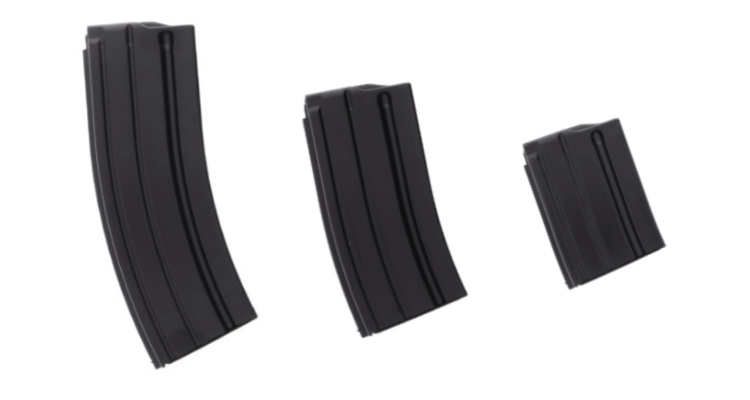 These magazines are hefty and almost feel like a loaded aluminum mag when empty, but are damn near bomb-proof. AK-lovers like myself enjoy these mags because they’re reminiscing of the WARSAW-pact AKM steel magazines we so adore.

The other major military arms makers responsible for producing steel STANAGs is FNH/FNA. These jet-black (and also FDE) heavy-gauge steel mags ship with their SCAR-16 carbine and are much more durable than their aluminum counterparts.

As for the surplus magazines, these are made in Singapore which some suggest are military surplus from their armed forces. They normally bear no markings whatsoever, but stand out from other steel mags with their phosphate matte gray finish that adds a few ounces to them.

All of these magazines are great choices for shooters who want the durability of polymer magazines, with the heat-tolerance and solvent-proof construction of metal mags. 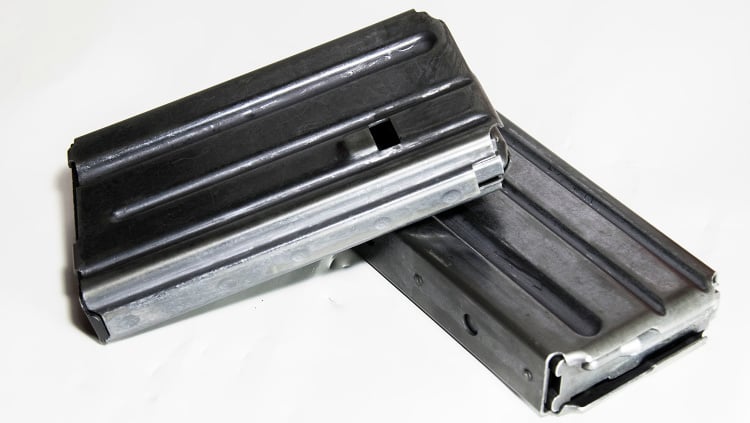 This is a tricky category to cover since the quality and functionality of these mags can be a total crap-shoot. This isn’t because of any issues dealing with their construction or build quality, but rather because they’re surplus and have aluminum bodies.

The latter is important because, unlike polymer and steel magazines, aluminum ones are far easier to accidentally bend out of shape, thus rendering them useless. —Seeing as by definition these magazines are all in used condition, how can a shooter ensure they’re not buying a neat paperweight?

Use your finger, seriously.

Take your index finger, or any finger thin enough to fit inside the magazine body, and push the follower down. If the magazine is significantly distorted or damaged, the follower will bind at some point. One thing you’ll probably notice while performing this check is how easy it is to tilt the follower forward or backward.

You’re witnessing firsthand what put Magpul on the map — their anti-tilt follower.

This may seem like a tangent, but is actually very relevant. Many of these magazines have a bad reputation for unreliability. Thankfully, purchasing a three-pack of anti-tilt followers goes a long way to improve their function.

This list may not seem as exhaustive as the polymer one, but that’s mostly because polymer magazines have become vastly more prolific in the last decade. That doesn’t mean aluminum or steel magazines don’t have their place in one’s go-to AR grab bag.

I’m a tremendous proponent of more is more when it comes to magazines, and variety is the spice of life. You never know when a collector might want one of these mags, and thus give you great leverage in trading towards something you really want, or that the latest and greatest gun cleaner might melt your poly mags. While this is admittedly unlikely you’ll never think to yourself, “Damn, I wish I hadn’t bought so many different magazines”.

Lastly, this isn’t an exhaustive list – there are dozens of contracting companies from countless countries that manufacture STANAG magazines in one form or another. Also, I intentionally left out any drums or coffin magazines as they deserve a dedicated piece to themselves.

Be sure to also read AR-15 Magazine Guide, Part One and Part Two.