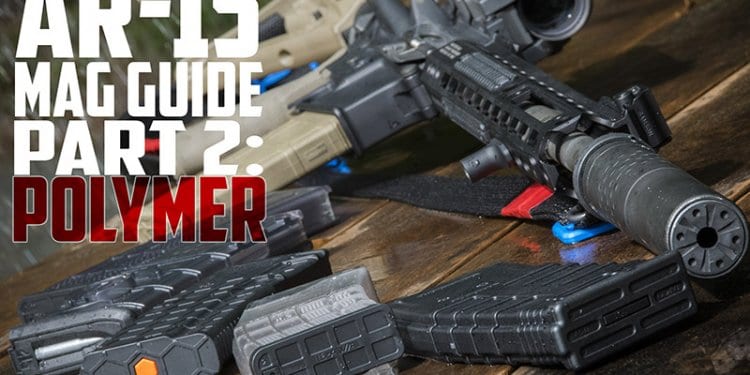 Our previous AR-15 magazine guide read like a strange combination of choose-your-own-adventure, and a buyer’s guide to these little capacious cartridge-carrying commodities. It helped readers decide on the best magazine to fit their wants and needs for America’s favorite rifle.

This second entry into the series assumes readers decided that in the battle between polymer and metal magazines, they choose polymer. (Don’t worry traditionalists, a metal companion piece will go live later this month as well.)

Polymer magazines are a great choice for shooters who want the lightest, most durable method of carrying rounds for their rifle or carbine. While Magpul Dynamics is responsible for the rise in popularity of these magazines, polymer mags have been around for much longer than Magpul.

History of the Polymer Magazine

Technically, the first mass-produced polymer magazine was made in Russia from what is erroneously referred to as Bakelite. The faux-wood material used in old radios, jewelry, and ICBM warheads is actually different from what the Reds employed in their wooden-like magazines.

The Soviet used a substance called AG4, and was one of the first Nylon-based polymers invented. Unlike most polymer magazines today, the AKM AG4 magazines are ultra-rigid, somewhat brittle, and feature a glossy finish —not exactly high-speed, low drag.

The West didn’t produce a comparable polymer magazine for America’s favorite black rifle until the 1960’s when William Howard of Wilson, NC founded Thermold Magazines in an attempt to sell the idea to the US military. He sought to replace aging stocks of USGI STANAG magazines whose performance left many wanting.

While the US didn’t show any interest in the mags, the Canadian military did. Our Northern neighbors purchased tens of thousands of magazines for their C-series of M16 derivatives and have been mostly happy with them. The only exception is when running blanks on full auto. After several magazine dumps, the rifles would get hot enough to melt the feed lips of the Thermolds, earning them the dubious nickname, ‘Thermelts’.

Between the production of Thermolds and Magpul PMAGs, the Israelis also tried their hand at a polymer AR15 magazine. The result was the Orlite magazine. Some shooters swear by these mags, but I’m not one of them. In my experience, these magazines are less reliable than standard aluminum magazines, and should thus be avoided unless ultra-cheap or free.

Since both of these magazines, and many imitators, have been around for so long, the used market is positively flooded with sub-standard polymer mags. So shooters who aren’t in the know often get burned buying anything but magazines from mainstream companies like Magpul. While these PMAGs are undeniably the gold standard for AR-15 magazines, there are other equal and even superior options, provided shooters are willing to pay for them.

Rather than have shooters suffer through several bad buys, I’ve condensed six polymer AR15 magazines every AR15 owner should have. 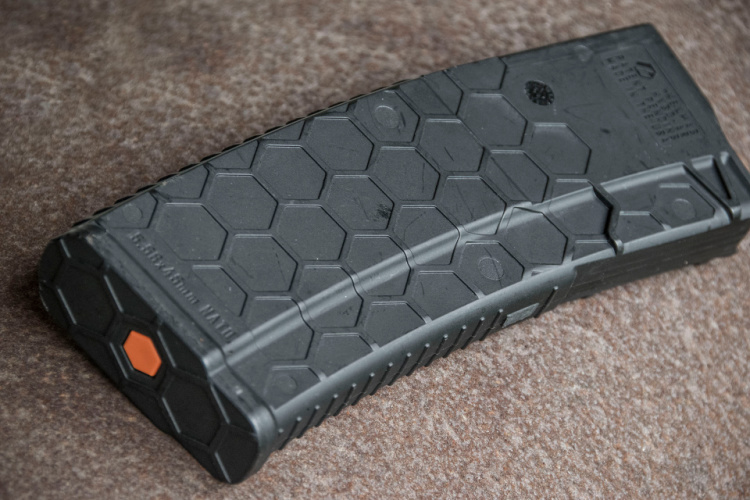 For shooters looking to shave every ounce from their setup, the HexMag HX is one of the lightest magazines available for the AR15.

We recently posted an article about the maker of these geometric pattern magazines, but they’re newsworthy on their own. These high-impact polymer magazines feature blaze orange anti-tilt followers that make it easy to check their status, while reliably feeding rounds to your favorite carbine.

As one of the lightest AR-15 magazines available, they use a fiber-reinforced polymer which is lighter than the polymer used in most polymer AR-15 magazines, while featuring a heat-treated 17-7 PH stainless steel spring for years of consistent performance. These are available in 30, 15 and 10 round capacities. 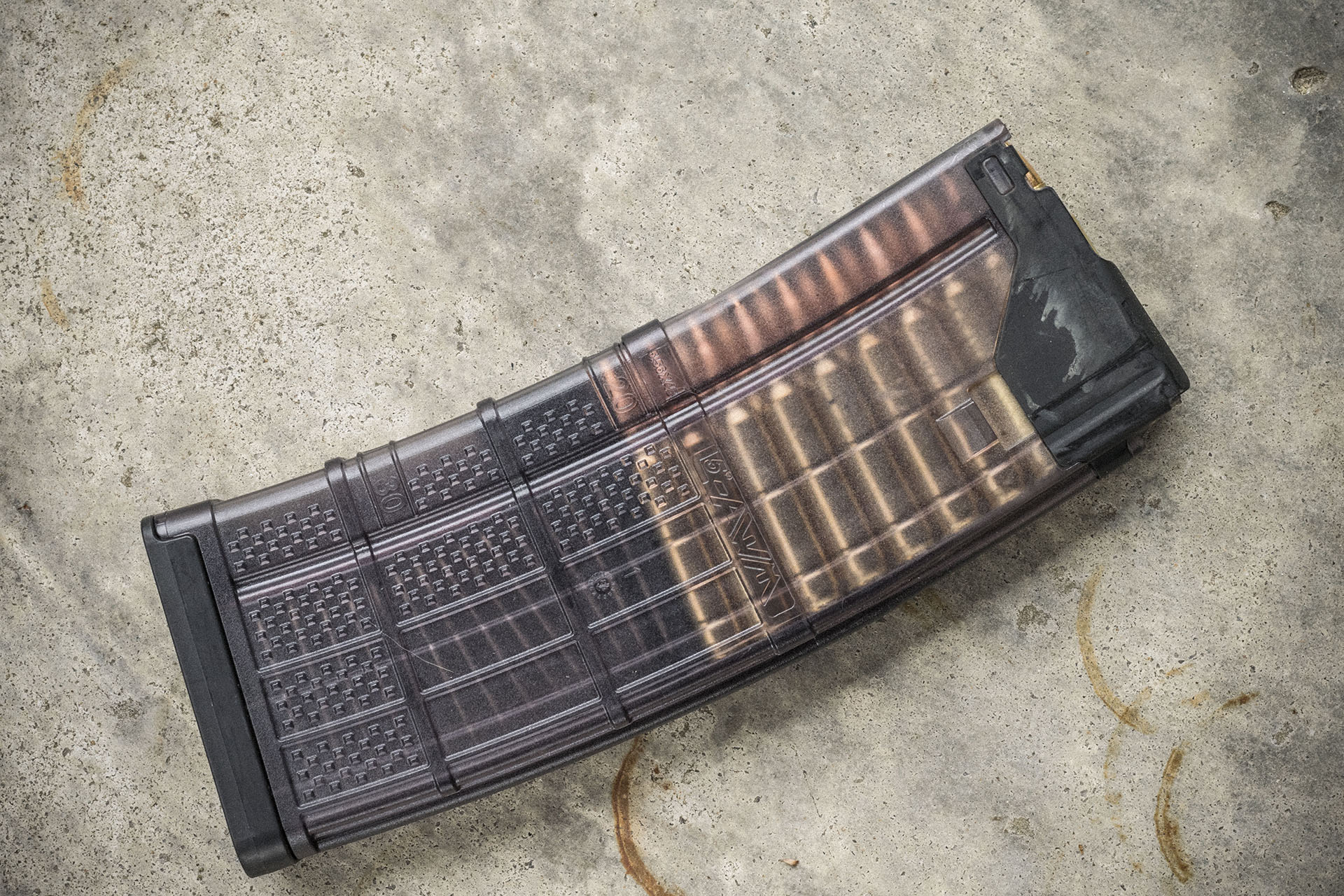 A favorite of competition shooters, these magazines are the author’s favorite. They even reside in his personal defense carbine, and competition rifle.

These ultra-durable polymer magazines are available in several color variations including translucent white and gray, as well as opaque solids like FDE and standard black.  But it’s not what’s on the outside that sets these exceptional magazines apart from competitors, it’s what on the inside.

Unlike more prolific polymer body AR15 magazines, the Lancer series of mags feature steel reinforced feed lips and collar. While this makes the magazines slightly heavier than most, it ensures they’ll tolerate hard use and abuse for years – and still continue to feed properly. 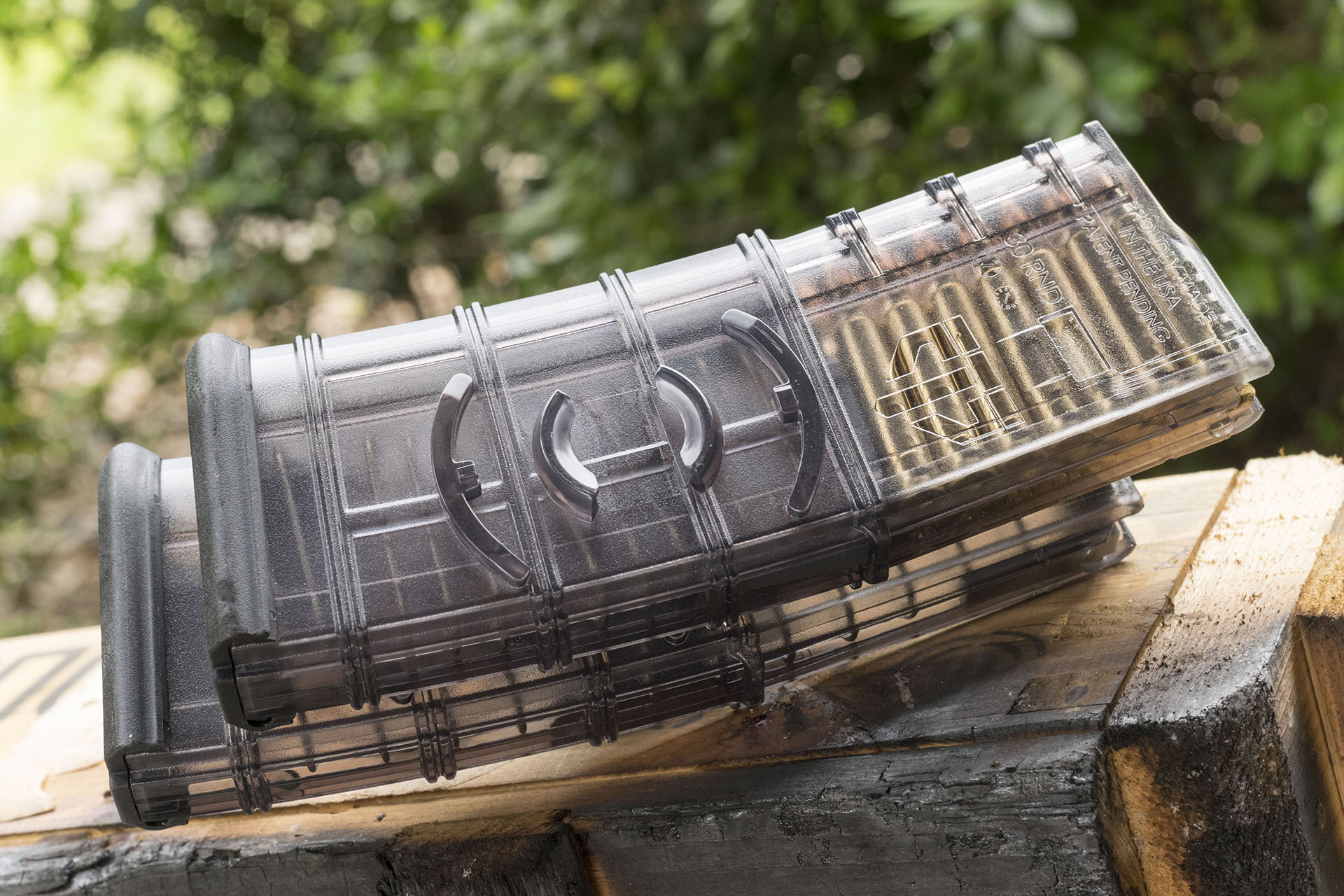 One feature not found on any other polymer AR-15 magazine is the built-in coupler system.

These smoky, translucent magazines are a more recent arrival to the polymer magazine scene but are an excellent addition nonetheless. Constructed of an extra-rigid proprietary polymer compound, they boost increased resistance to feed lip cracking caused by drops. Particularly, landing on those feed lips while loaded.

The magazines feature pronounced reinforcement ribs along the bottom half of the magazine body and an oversized baseplate with a polymer cartridge protruding from the base. This faux round is actually the magazine disassembly button, that when pressed allows the baseplate to be slid forward and free of the mag body. This makes maintenance and cleaning a rapid, effortless affair.

The coupler system allows magazines to be attached to one and another in the same style as so-called jungle magazines. It’s a nice feature for shooters who wish to keep a reload close at hand, but don’t want to buy a separate coupling system. 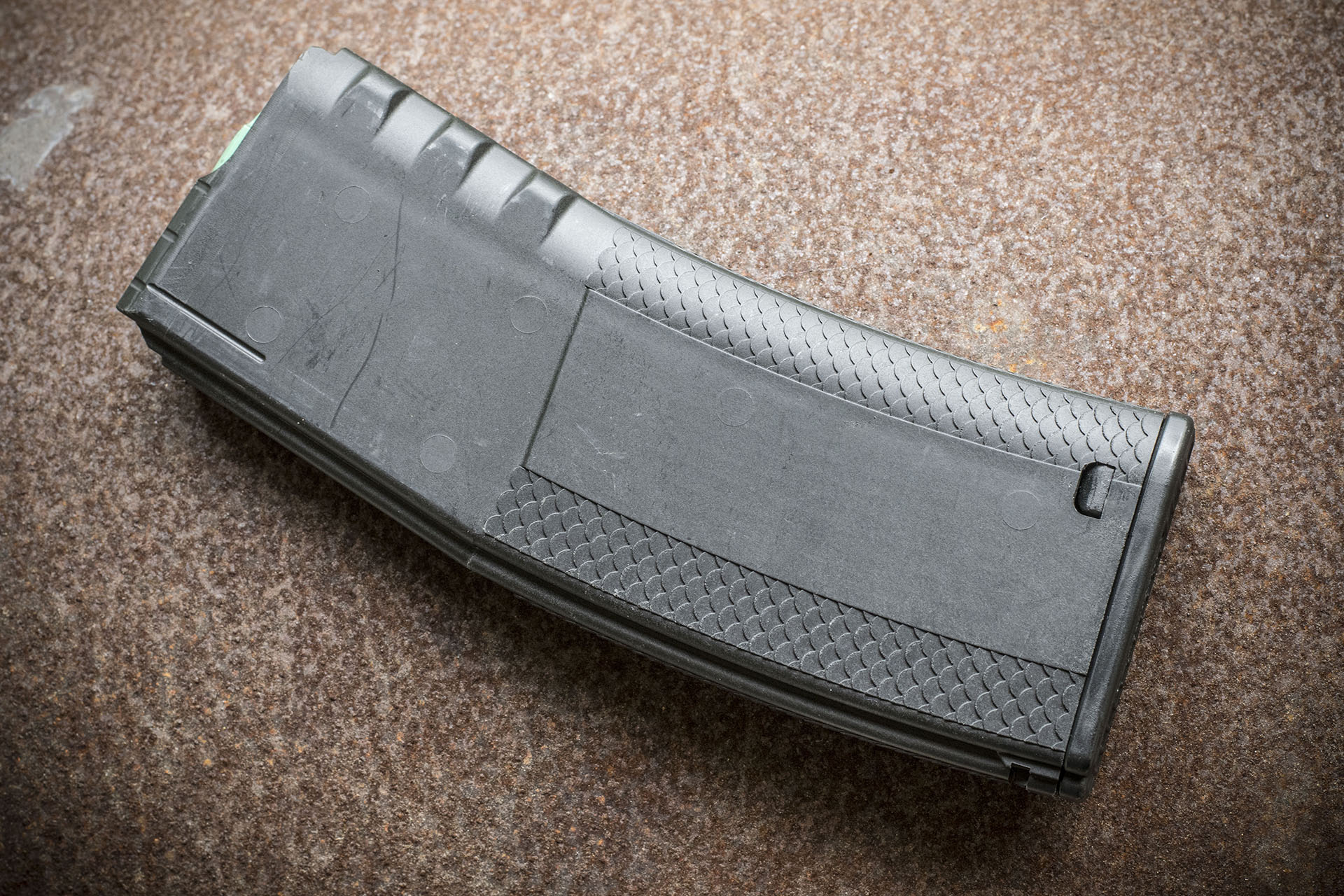 Troy Industries made a name for itself with high-quality railed handguards, effective muzzle devices, and other well-made firearm accessories. It was a logical choice for them to create a quality AR-15 magazine to go along with all their other products.

Available in multiple colors including FDE, black and olive drab, these tough mags also include an optional, extended baseplate tab to facilitate easier extraction from pouches and carriers. The polymer used in these magazines isn’t as hard as that employed on the ETS magazine and even feels somewhat spongy. Though this extra ‘give’ permits the magazines to bend when others might break. These magazines are available in a pinned 10, and standard 30 round capacity.

Plus they have the distinction of being sold in-stores at many non-firearm-centric sporting goods shops, so picking up some in a pinch won’t involve next-day air shipping. 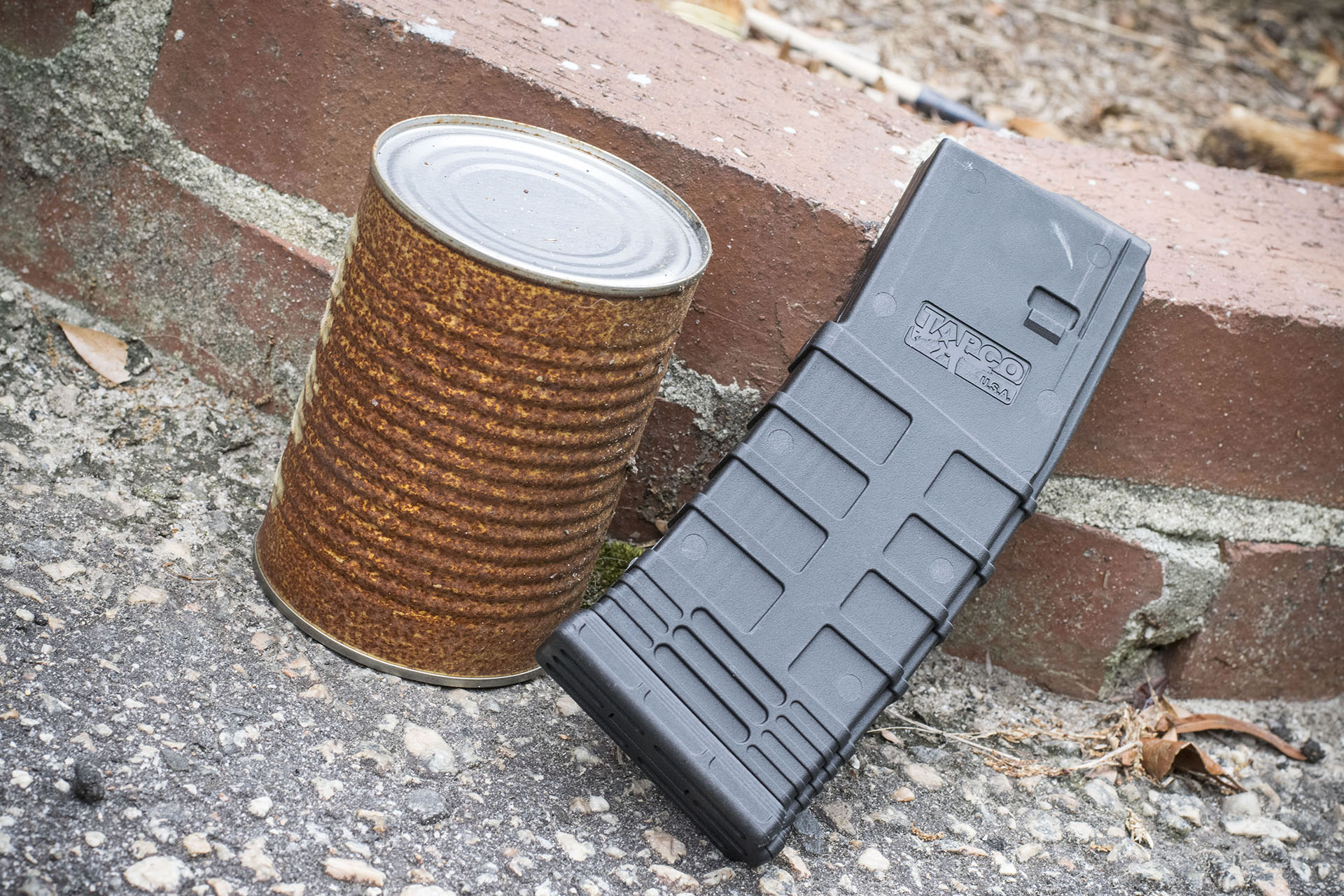 While the aesthetics of the magazine will turn some shooters off, their functionality will not.

Tapco often gets an unfair shake in the gun world. Many shooters dismiss their products as second-rate, based solely on the reputation of its AK furniture components. While I admit I was a little biased towards those magazines myself, after running them for a few hundred rounds I have to say I’m impressed.

They utilize quality anti-tilt FDE followers and heavy-duty magazine springs to provide consistent, reliable feeding. The pronounced magazine ribs that many elitists bemoan are actually integral to reinforcing the design and provide increased rigidity that allows the magazines to tolerate harder use.

While the nylon-filled polymer used in their construction might not be as cutting edge as others on the list, Intrafuse magazines make great range mags and can often be found for very cheap. Plus if a shooter manages to destroy one, Tapco has great customer service that will be happy to replace any faulty items. 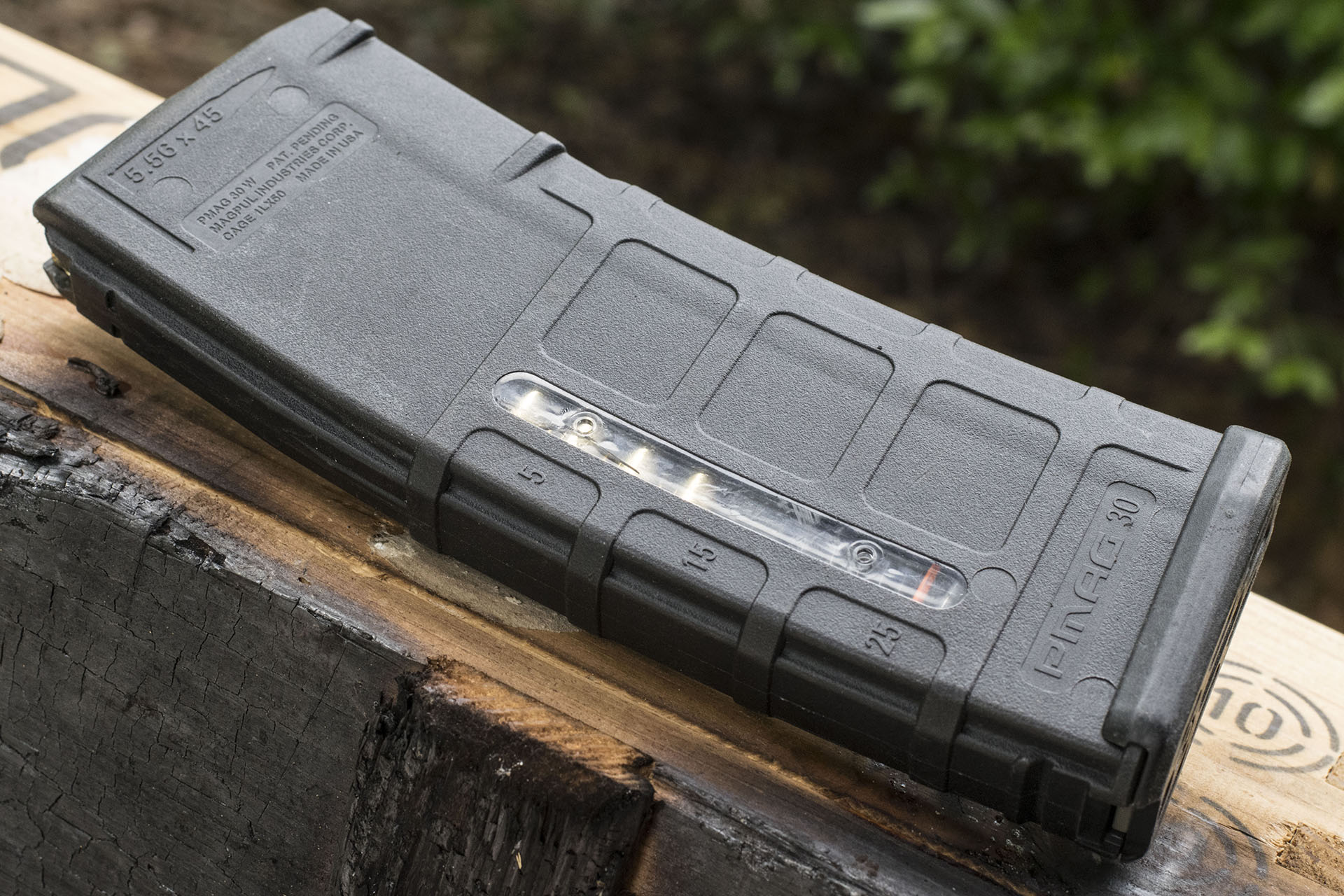 The gold standard of AR15 magazines introduced the masses to the wonders of polymer construction.

Originally founded selling Magpuls, or loops that attached to STANAG magazines that made them easier to retrieve from a magazine pouch, Magpul has built an empire.

From polymer magazines to iPhone cases, the brand of Magpul has built a cult of personality around their high-quality products and the zeal of those followers. Though this zeal isn’t misplaced, their magazines are much lighter and more durable than the STANAGs they sought to dethrone. But now that they aren’t the only major polymer magazine-maker, are they still as relevant?

The same reasons that enamored shooters to them more than a decade ago still stand strong today: dependability, durability, quality, and a fair price.

At the risk of sounding like a paid advertisement, these magazines are flawless as both range and home defense choices.  They might not be as durable as some of the more advanced examples above, but shooters will be hard-pressed to find a more reliable, durable magazine for the price.

Polymer AR-15 magazines offer shooters the best solution to keeping their favorite rifle fed, without extra bulk or weight. On top of that, they’re far more durable than aluminum AR-15 magazines, immune to rust, and are virtually crush-proof. They can be somewhat tricky to pull from carriers and vest pockets on newer apparel, but once broken in are great.

Given the price of magazines now, shooters looking to get serious about shooting should buy cheap, and stack deep.  After all, the best magazine in the world is the one closest at hand when you need it.