Here’s How I Modified My AR15 Pistol Build 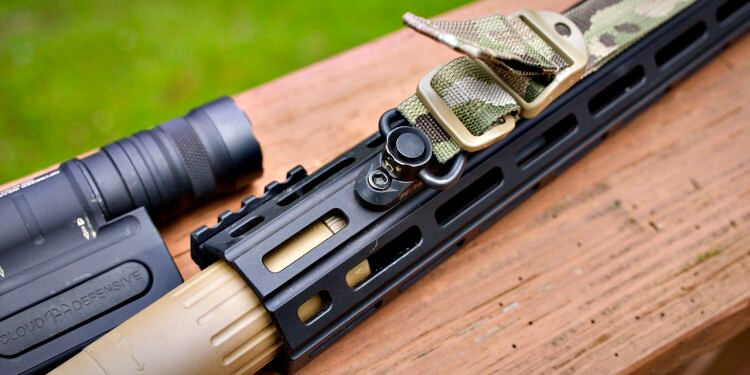 No, you can’t always get what you want

I love music, but I’m not much of a Rolling Stones fan even though they speak the truth. Last night I ran my AR15 pistol build through the table saw to make a modification because I needed a shorter handguard.

But if you try sometimes, well, you might find

You get what you need

I didn’t get what I want, but I ended up with exactly what I needed; a handguard that fit my specific application. 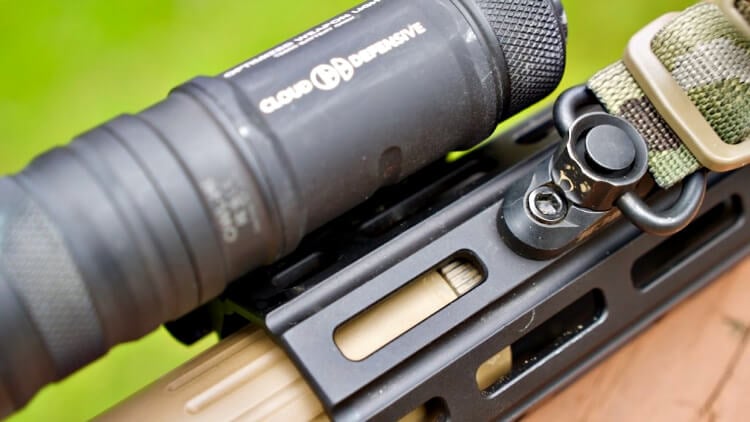 The end of my 12″ handguard is a busy place. A pic rail holds my Cloud Defensive Owl, an MLOK QD point holds my DM Sling, and the 51T Ratchet release sits under the handguard.

To be fair I didn’t run my whole gun through the saw, just the handguard. At the same time, it felt pretty odd to be cutting down AR parts on my saw. People get worked up when the Dremel tool comes out. This took the home gunsmithing game to a whole new level.

But there was a reason for my actions…

My Life is Quiet Now… 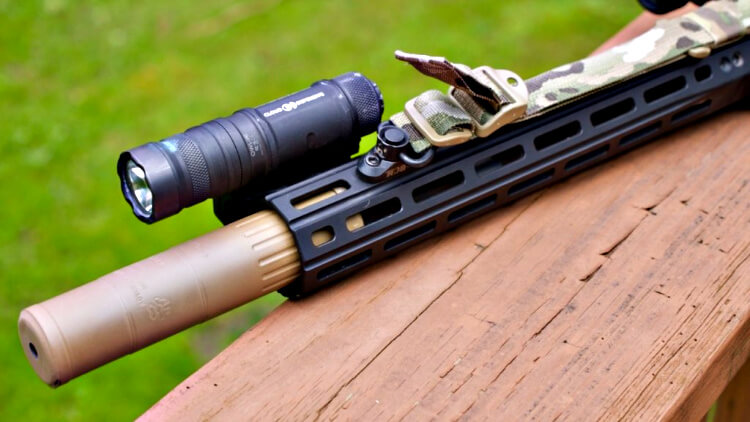 As soon as I mounted the AAC M4-2000 I could see the issue that I was going to have. Releasing the ratchet to remove the suppressor…

Recently I started to work more closely with Black Boar Armory and Coatings. One of the things they do is suppressors. Now suppressors haven’t really been my bag because of the cost and wait times associated with getting ahold of suppressors.

All that changed when BBAC added me as an agent on their FFL. I now have the ability to check cans out from the shop for testing and evaluation. This has caused an interesting chain reaction when it comes to my AR15 pistol setup.

One of the suppressors I have been putting to use is the AAC M4-2000. This can is pretty slick. It has a durable feel to the build with a fully welded Inconel 718 core and stainless steel can over top. The suppressor reduces sound from 32-34 dB and the can attaches to the included 51T 1/2×28 Blackout Flash Hider with the 51T Ratchet System.

So, Why Did I Run My AR15 Through the Table Saw? 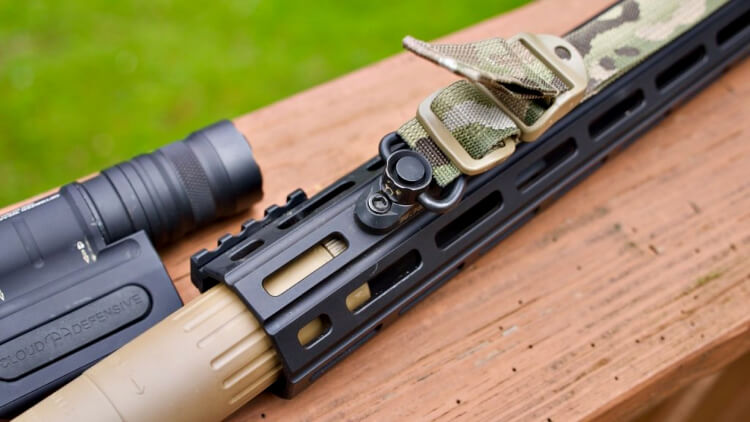 The ratchet release can be accessed at some points through the MLOK holes.

That 51T Ratchet system is where the problems started. I love the positive feel of the can locking in place. The fact that I was running a 12” handguard on an 11.5” barrel made it difficult to remove the suppressor. The ratchet release needed to be depressed to unscrew the can. With the release sitting under the handguard, depressing the release was spotty at best.

I tried to use the tip of my blade.

I used a bobby pin.

Even a plastic knife from some take-out…

I could make it work, but it wasn’t pleasant and it wasn’t “quick release.”

My upper is an Aero M4E1 Enhanced upper which limits my handguard choices. Aero makes a 12” and a 9”. Neither is perfect as I want to get my light out as far toward the end of the can as possible. The 9” would have been sufficient, but the fact that it is currently out of stock was a deal-breaker.

So I decided to hack off my handguard. 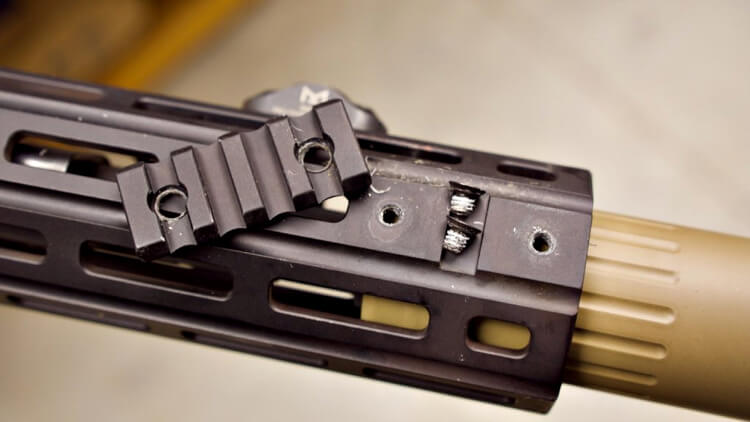 Even with the rail and the Cloud Defensive OWL removed there still isn’t enough access to depress the release when it gets to 12 o’clock.

Cutting aluminum isn’t a bid deal on a table saw. You can buy a special blade intended for cutting aluminum, but it really isn’t necessary if you have a sharp blade. Carbide teeth make it easy peasy.

I measured. Then measured again and made a conservative first cut and dialed in the adjustment to get the best cut I could. 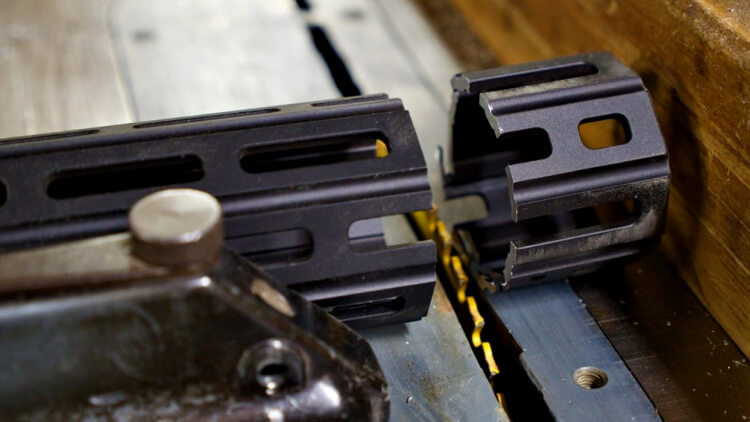 Using the T-Square and a carbide tip blade the aluminum cut very smoothly. 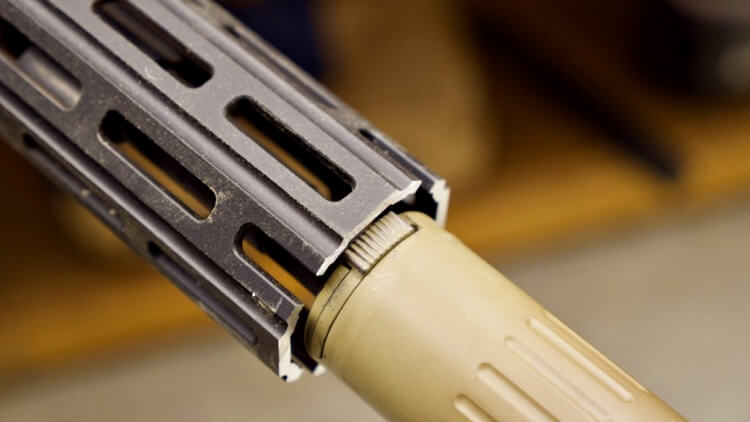 The final cut before sanding and paint.

I took another few minutes and hit the edges and corners with some fine-grit sandpaper and then hosed down the raw metal with some flat black rattle can and put it all back together. 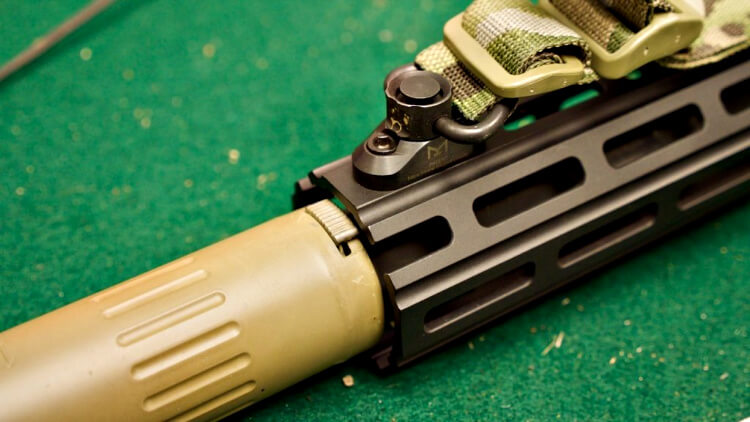 With the handguard cut back, there is uninhibited access to the ratchet release.

The result isn’t disappointing. It isn’t perfect either.

What I want is the perfect handguard for me from the factory. It might exist, but if it does, it costs money. My project didn’t cost me a dime.

But if you try sometimes you find

You get what you need

And that is what I ended up with. Exactly what I need.

My Shift in Thinking 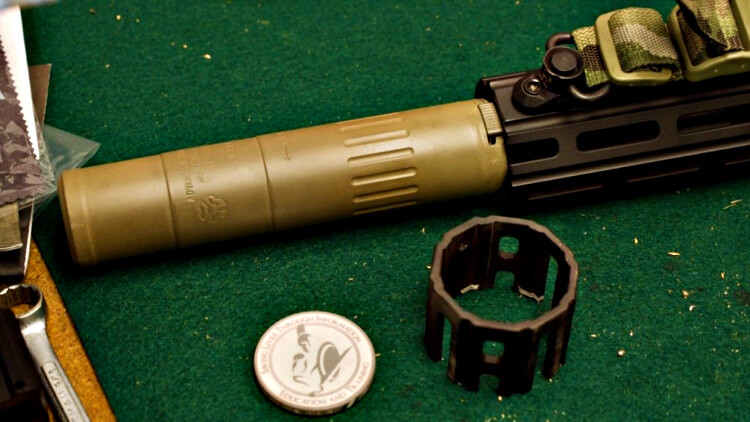 The final product. I can’t call it elegant or beautiful, but 51T Ratchet is now QD.

I’m a relatively resourceful and capable person when it comes to making things work. Finding a workable solution that had me up and running in short order for no additional money was satisfying. More satisfying than dropping coin on something I wanted but didn’t need.

I’m not suggesting you should take your AR15 pistol to the table saw, or even a Dremel. However, finding ways to adapt the gear that we have to fit our parameters just makes sense.

I’m still looking for a section of MLOK rail that I have stashed someplace special so I can fully complete the modification, but I’m pleased to have made headway on my AR15 Pistol.