Vikings are one of the most iconic of ancient warriors — they’re iconic, or at least the stylized mythic popular culture version is. There is much to commend them, particularly when considering the topic of self-reliance, preparedness, and the capability and mindset to defend yourself from violence (without resorting to the berserkergang). Much of the Viking ethos propounded by the Hávamál is good advice for pretty much anyone (not just the “modern Viking”) even if they’re not the type to yell ‘Til Valhall!.

Consider this counsel for the Viking warrior:

“Never walk
away from home
ahead of your axe and sword.
You can’t feel a battle
in your bones
or foresee a fight.”

It’s sure hard to argue with that.

In any case, the company Anachrobellum takes the concept of stylized ancient warriors and kits them up in contemporary fighting gear, i.e. in this case they take a modern Viking berserk in chain armor with an ax and hang things like NVGs, a suppressed SCAR, frag grenades, flashbangs, and all sorts of battle rattle on him.

• Til Valhall  (Until Valhalla)

• Viking Shield: Don’t Tread On Me

Some say “Til Valhall!” You might hear it anglicized as “Until Valhalla!” It’s often used by current and former military personnel, OGA types, and of course responsible armed citizens. It was also the “flagship” design of Anachrobellum. Though unavailable for a while, we’ve been advised it’s now back.

The following clip features soldiers of the Telemark Bataljon (Telemark Battalion) preparing to roll out on a combat mission. The video apparently caused some consternation when seen in Norway (and by certain elements of NATO’s leadership).

“You are the predator The Taliban is the prey!”

The Telemark Battalion is a mechanized infantry unit and has, along with Norwegian special operation forces (SOF) been the primary “Norse” formation deployed to assist ISAF in Afghanistan. It has also deployed to Iraq. 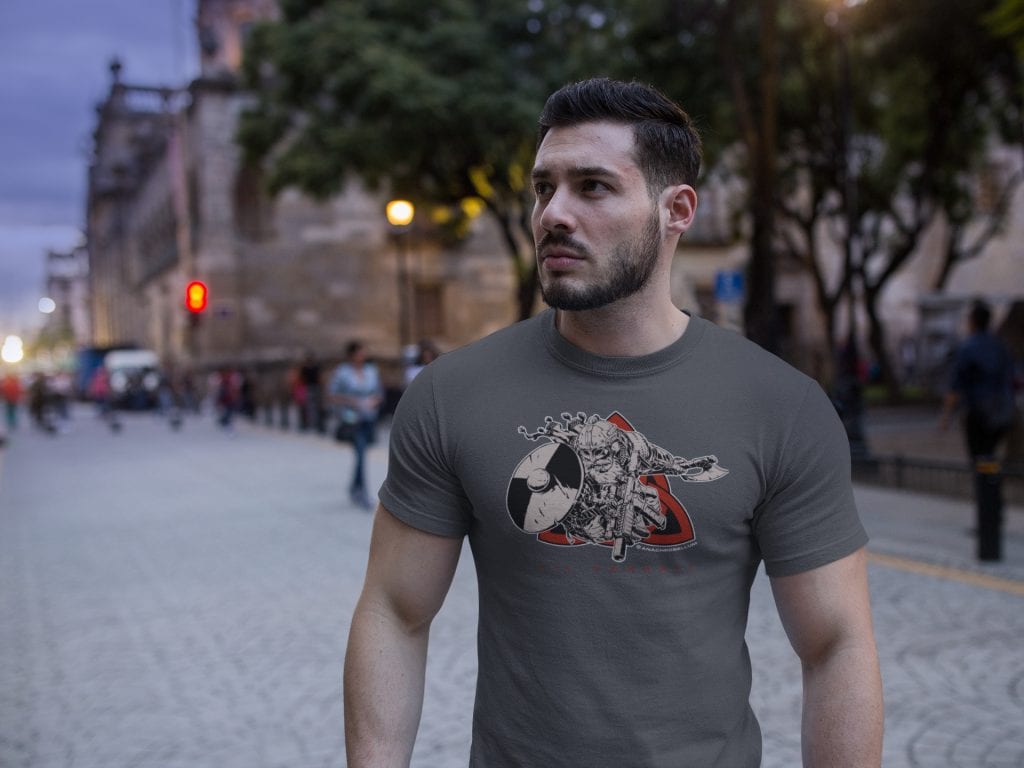 In addition to “typical” Viking fare like a bearded ax, helmet, and chainmail armor, the Norseman in the Til Valhall design is also equipped with a variety of implements that will no doubt be familiar to Mag Life readers. Not least among those is his SBR, which, it should be noted, sports such accessories as:

• a Magpul Ranger Plate (it’s difficult to tell which one)

• some model of Streamlight

• an RDS magnifier in one of his mag pouches

• some sort of silencer

Similar accouterments adorn his helmet and ear pro, the mag pouches of his battle rattle (LBE), and presumably whatever sort of pack he’s wearing.

From the fury of the Northmen deliver us, O Lord. That was a prayer allegedly raised across Christendom over a thousand years ago. This shirt is a nod to the ethos of the modern Viking.

This shirt portrays what the modern Viking pipe-hitter might look like while servicing his enemies. It’s just a continuation of perhaps the most popular warrior archetype.

As you can see, this berserker is a little better equipped to wreak slaughter and carnage upon his foe than were his distant ancestors — though true to form he has transitioned from blaster to a bearded skull splitter to make a point. We’re pretty sure Gunnar Hamundarson and Egil Skallagrimsson would approve. 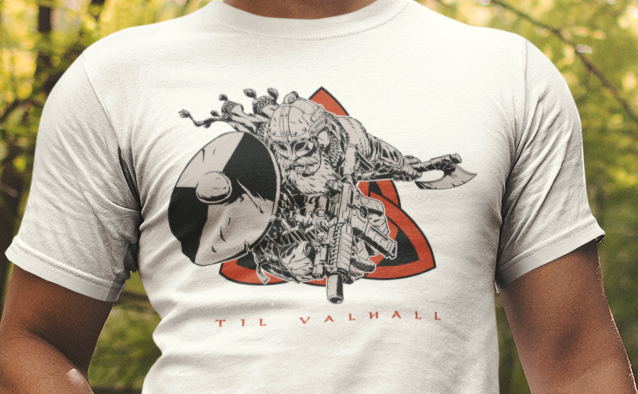 There’s a Norse dragon on it instead of a rattlesnake, and it’s painted on a Viking shield instead of a banner or a morale patch, but that’s the Gadsden Flag alright. It’s the new Gadsden Flag shirt from Anachrobellum: Til Valhalla III: Don’t Tread on Me.

As you can probably tell from the name, they have more than one Viking-themed design available.

These juxtapositions make sense when you consider the name. The term Anachrobellum (www.anachrobellum.com) is apparently a combination (of sorts) of anachronism and the Latin word Bellum: war. Anachrobellum’ss designs typically focus on a mish-mash (kitbash?) of gear from historical warrior archetypes and modern special operations personnel. You can follow them on Insta, @anachrobellum.

Following up on the popularity of their “Til Valhalla 3” design, Anachrobellum has released a new Nordic-themed Gadsden Flag shirt. This one is just the flag, sans Viking, but retaining Jǫrmungandr the World Serpent, and Yggdrasill, the mythic tree connecting all the Nine Worlds of Norse lore.

“It’s a Norse take on the Gadsden Flag: instead of a rattlesnake, it features Jǫrmungandr, the World Serpent. In the place of a patch of grass: Yggdrasil. Would Christopher Gadsden like it? We’re not entirely sure, but you can bet the early Continental Marines would. And so will many responsible armed citizens of today. 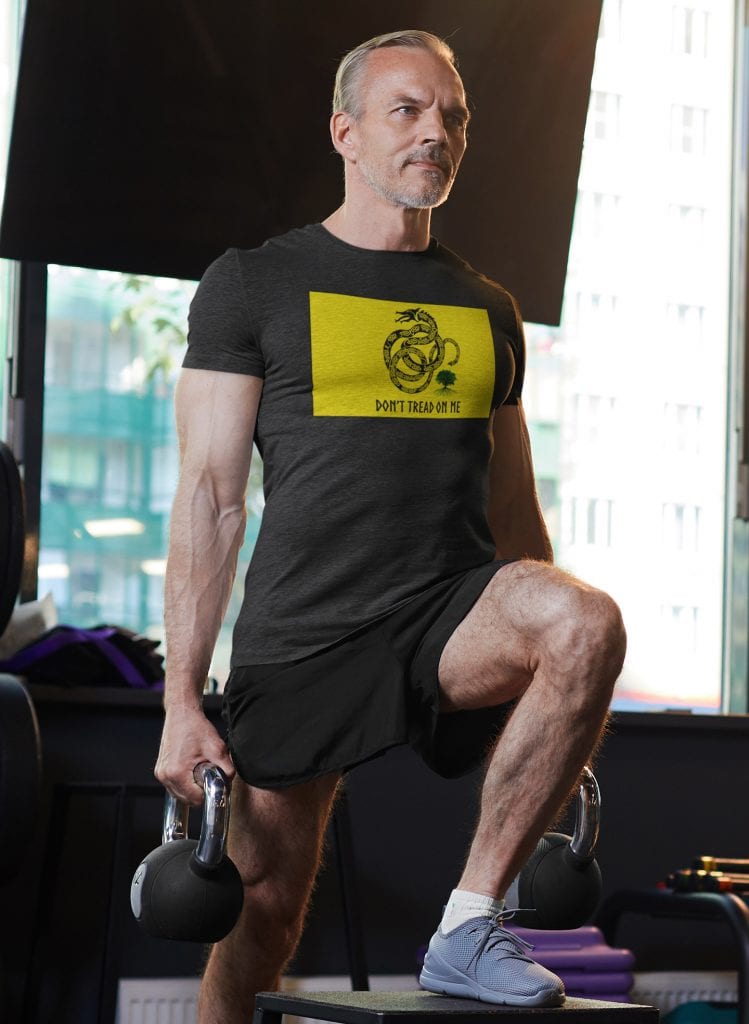 Replace axe or sword with pistol, rifle, etc., and the following refrain from the Havamal rings true centuries later.”

“Never walk
away from home
ahead of your axe and sword.
You can’t feel a battle
in your bones
or foresee a fight.”

The Hávamál may not hold the average person’s interest all the way through, but it does contain a surprising amount of good advice, particularly for travelers. In fact, when it comes to situational awareness and what we now call Every Day Carry, many people of today could stand to take some advice from the ancient poem(s).

Anachrobellum’s warrior archetype shirts can be found online; you can also follow ’em on the Instas, @anachrobellum.

This translation may be way off. But what do I care? I’m a cartoon!

“Two main categories of professional warriors appear to be visible in historical and literary sources, although an individual might find himself at different times in both categories, and the distinction was not always clear-cut. The first category was the hirðmaðr, or ‘household warrior’, of a chieftain, lord, or king.

As a  member of a hirð, the hirðmaðr, owed personal loyalty to his lord, whether he originated from the region ruled by that lord, or from elsewhere, and could expect to be rewarded for his loyalty and service. Skaldic poetry stresses generosity, alongside skill in war, as one of the most important characteristics expected of a lord.

That generosity would be expressed in providing food and lodging for the hirð, as well as payment and gifts of gold and silver (especially arm-rings and other jewelry [sic]), but weapons also seem to have been a common reward for service. Jewellery and weapons were ideal as highly visible symbols of the relationship between a lord and his warrior, reflecting the wealth and success of both, and highlighting both the generosity of the lord and the achievements of the warrior in having earned such rewards.

Another model of the military organization was the félag, or ‘fellowship’. This term appears in contemporary runic inscriptions and may indicate membership either of a shared trading venture or a military company. The Frankish Annals of St. Bertin note that in 861–62 a Viking fleet over-wintering on the River Seine divided into groups in different ports for logistical reasons, with the division based on the sodalities (‘brotherhoods’) which made up the fleet.

Some brotherhoods may have been as small as a single ship’s crew, but others may have been mini-fleets of several ships. Archaeologist Neil Price has drawn comparisons with pirate fleets of the 17th and 18th  centuries, which lacked the formal status of state-run armies and navies, but which could nevertheless muster fleets large enough to hold their own against government forces. Such groups had ties and bonds within the group, but also the flexibility to merge with others and separate again as they saw fit.

This would also fit with the original sense of víkingr as ‘pirate’,  and the sense within Old Norse literature that ‘Vikings were slightly outside the mainstream society of the period.  Whether as members of a hirð or of a Viking brotherhood, a sense of shared identity was probably reflected in visual appearance.”

This is from an ancient account and sheds some light on the berserkergang: Ships came from the west, ready for war, with grinning heads and carven beaks. They were laden with warriors, with white shields, with western spears and Welsh swords. They tried their strength against the eager king, the lord of the Eastmen that dwells at Outstone, and he taught them to flee. The king launched his ship when he looked for the battle. The berserk roared in the midst of the battle, the wolfcoats howled and shook the iron…

“Berserks and wolfcoats were warriors in Harald’s army; the names seem to have been interchangeable, but berserks are usually described as battling in a ferocious frenzy.”

berserker  (someone seized in the grip of the berserkergang)

n. One of a band of ancient Norse warriors legendary for their savagery and reckless frenzy in battle.
[Old Norse berserkr: perhaps ber-, bear (akin to björn, bear, and bera, she-bear, from the bear-skins perhaps worn by the warriors or berr, bare (from the fact that ancient European warriors often fought nude; see bhoso- in Indo-European roots) + serkr, shirt.]

“You must only let the red rage take hold of you in the thick of battle.” (red rage = berserkergang)

The Hávamál is a Viking book of wisdom, the “Sayings of the High One”. it is part of a centuries-old manuscript containing a collection of Norse poems called the Poetic Edda. It has been translated many times over the years, and there are different versions out there (some translations are disputed). The counsel contained in its 164 verses is described as coming from Odin, the Allfather and most powerful of the gods in the Norse pantheon.

There are many other examples of good advice therein. Some, like the admonition to leave the house armed quoted above), have to do with safety, travel, preparedness, and warfare. Others are about personal comportment, love, and success.

(The following are not literal translations. These have been worked into contemporary language and idiom.)

9 Life Lessons from the Vikings

Rise early, if you want
to take another man’s
property, or his life.
A sleeping wolf
seldom gets his meat,
or a sleeping warrior a victory.

A wise man
is not showy about his wisdom;
he guards it carefully.
He is silent when he comes
to a stranger’s home.
Harm seldom befalls the watchful man,
for you can never have
a more faithful friend
than a good supply of wisdom.

The watchful guest,
when he arrives for a meal,
should keep his mouth shut,
listening with his ears
and watching with his eyes—
that is how the wise man finds his way.

A fool
stays awake all night
worrying about everything.
He’s fatigued
when the morning comes,
and his problems remain unsolved.

A torch is lit by another
and burns till it’s burned out;
a fire is kindled by another fire.
A man becomes wise
by speaking with other men,
but foolish by keeping to himself.

You will often
get repayment in kind
for the words you speak to others.

Cows die,
family die,
you will die the same way.
But a good reputation
never dies
for the one who earns it well.

Never laugh
at an old man.
There is often wisdom in what old men say;
wise words will often
come from a gray-bearded mouth.

Looking for a Holosun Green Dot Optic? The 407 Series Now Has One