It’s been a long time coming, but it is now here: the .410 bore shotgun from American Tactical. Called the Omni Hybrid 410, the new AR-style shotgun combines several of American Tactical’s technologies with several years of development.

I got a sneak peek of this gun at a firearms wholesaler show in 2014. Even though I would have liked to seen it on the market sooner, it appears the company took its time to make sure the final product would deliver the performance shooters demand.

Ok, so what is this new gun? At its most basic description, it is an AR-style shotgun that uses a short stroke piston and is built on a polymer and metal “hybrid” lower. It can run a range of 2.5” .410 bore shells and feeds from a detachable magazine.

The Omni Hybrid 410 uses the company’s own AR15 Omni Hybrid lower receiver. This is a polymer lower that uses an over molded buffer tube insert for additional strength at the weakest part of all standard AR lowers. This over molded insert wraps down from the buffer tube collar and extends to the rear takedown pin hole. This provides a great deal more strength at this critical area than other polymer lowers can offer. 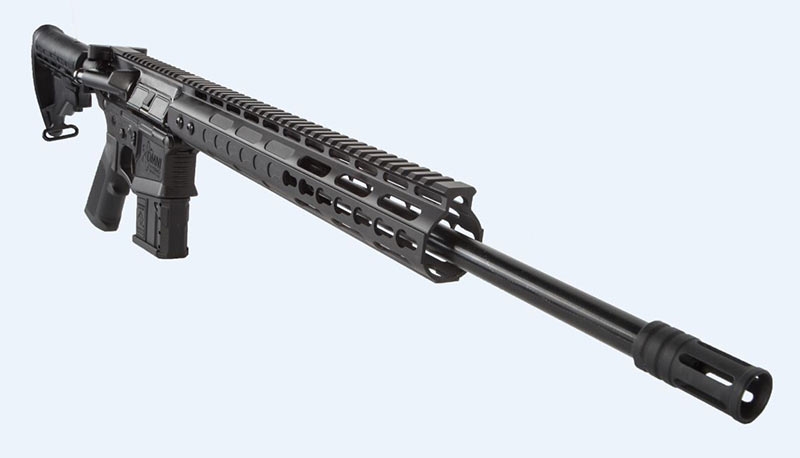 Other AR uppers can be dropped on this lower. So, if you want to shoot 5.56 NATO or 300 BLK with this lower – no problem.

The gun uses an 18.5” barrel and has a birdcage style muzzle device on the end. If you need to add an accessory, the company includes a 13” handguard with KeyMod attachment points. The uppers are built to normal AR specifications and can be dropped onto most other brands of AR lowers that are built to military specs.

American Tactical states that these guns will run on most 2.5” .410 bore ammo including birdshot, buckshot and slugs. However, the company discovered during its testing that some of the ammunition on the market is advertised as 2.5”, but is actually longer. These longer shells may not run reliably in these guns.

American Tactical recommends measuring the shells of any ammo you purchase to ensure it conforms to the 2.5” length. Of course, the company also sells its own 2.5” .410 bore ammo. I would imagine these guns will run those loads just fine.

A single 5-round magazine ships with the Omni Hybrid 410. Additional 5- and 15-round magazines are available. Frankly, who doesn’t want a 15-round shotgun magazine to run in one of these guns?

When I first saw the prototype gun almost three years ago, I was told that the shotguns would have a MSRP of $650. As time passes, costs tend to increase. So, I was pleasantly surprised to see the suggested retail price of the shipping guns was less than the projection from years ago. The actual shipping MSRP is $599.95. Well done, American Tactical.