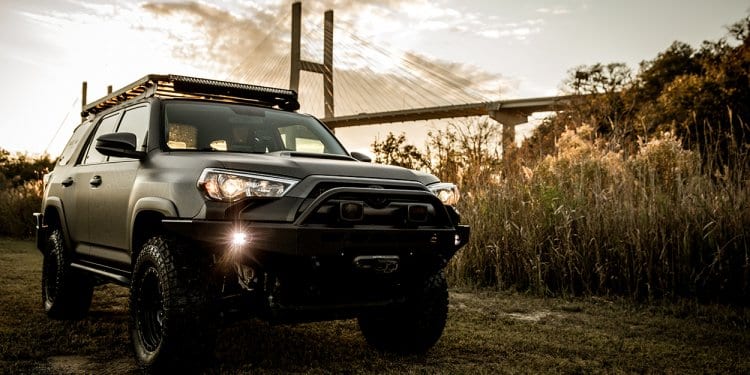 The 2016 Toyota 4Runner you see here was a three-year project.  It’s a Toyota 4Runner Trail Edition with a 4.0 V6 engine and stock 4×4 transmission and differentials, but the majority of the remainder has been upgraded to various degrees.  To call it a “tactical truck” or “survivor truck” would be unnecessarily theatrical, though it could certainly function that way. Though many of its modifications (like the Warn Winch and Rotopax) and offroad design would be acceptable bug out truck accessories, it was built mostly with truck camping, family-hauling, long road trips, and work-related large scale outings to ranges and training facilities. 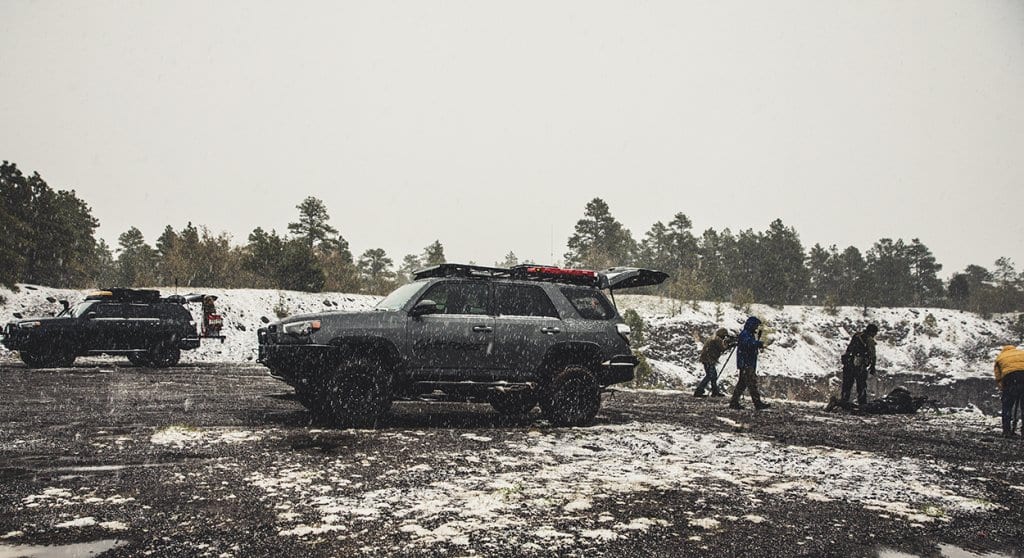 On the range with Ronnie Dahl.

To that end, some modifications might not be the same as those someone might choose for a dedicated rock-crawler. This rig has driven across the United States (and back) three times now, providing transportation as reliably in downtown Los Angeles as it did in Ouray, Colorado. The most fun we’ve had with it, however, is without a doubt in Moab, Utah. Unless you count the trip across Nevada in a blizzard pulling a 17 ft. Jayco trailer, of course — you know, the time I forgot to put non-freezing washer fluid in the window wash, and all the squeegees at the gas stations were frozen solid in a block of ice. That was a little exciting. 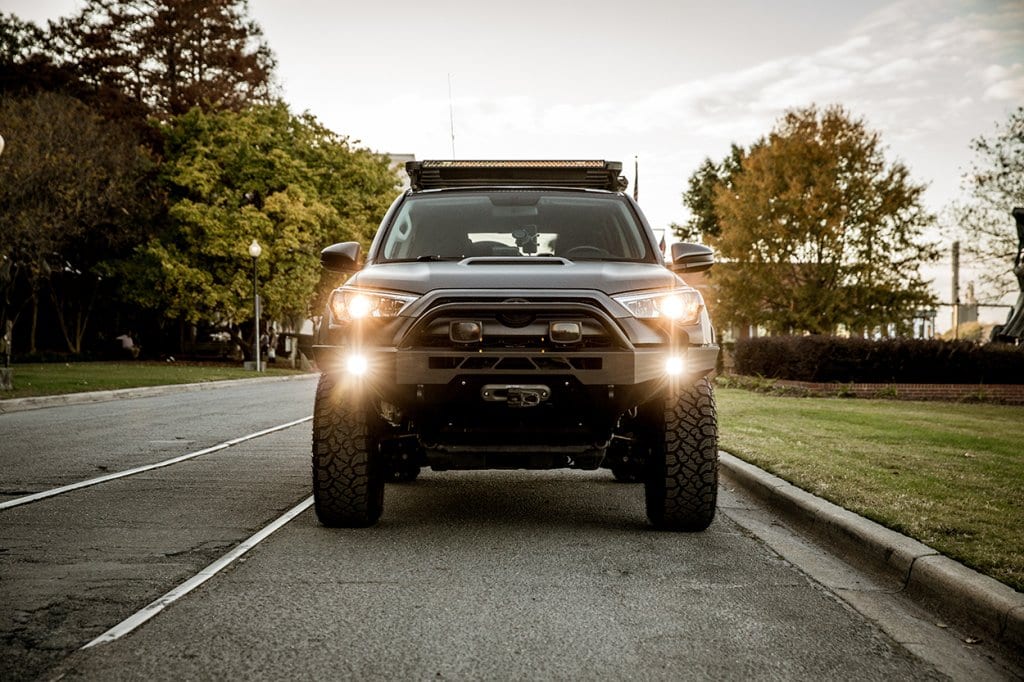 On to this range truck build.

Speccing out the rig.

The truck’s suspension includes an Icon Vehicle Dynamics Stage 4 Coilover upper arms up front, Icon Stage 4 with reservoirs, and a heavy-duty 3 in. Overland coil in the rear. The steering has been upgraded with heavy-duty tie rods.

One of the advantages of this system (not the only one) is Icon’s Delta Joint, which provides a practicable combination of high-angle ball joint and traditional uniball  (you can read the manufacturer’s explanation in more detail here). 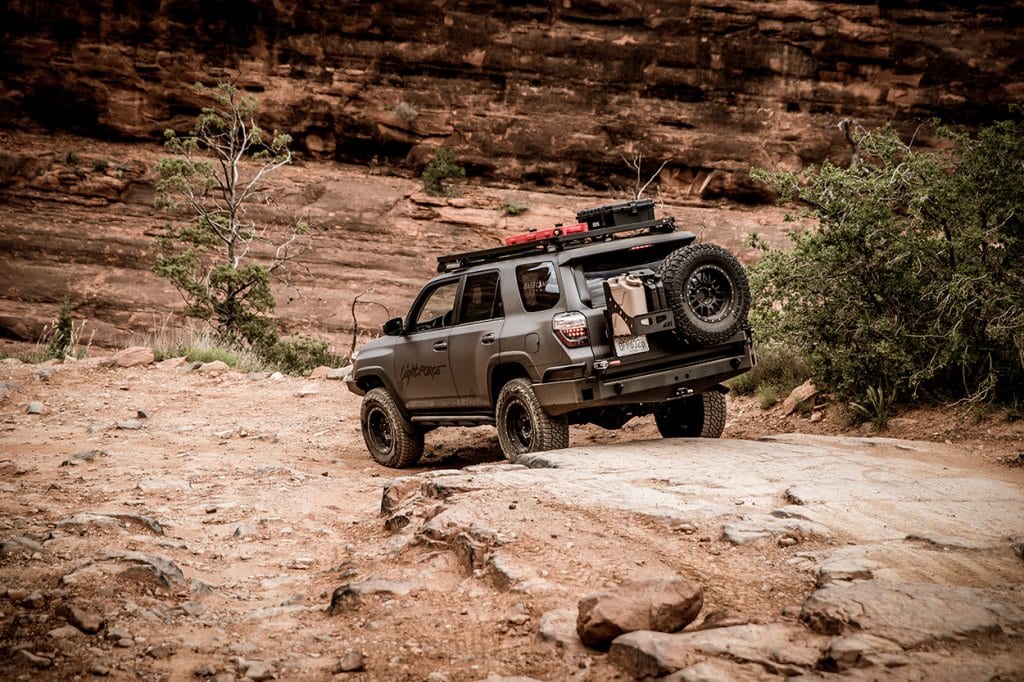 Icon suspension putting in some work near Sedona, Arizona. 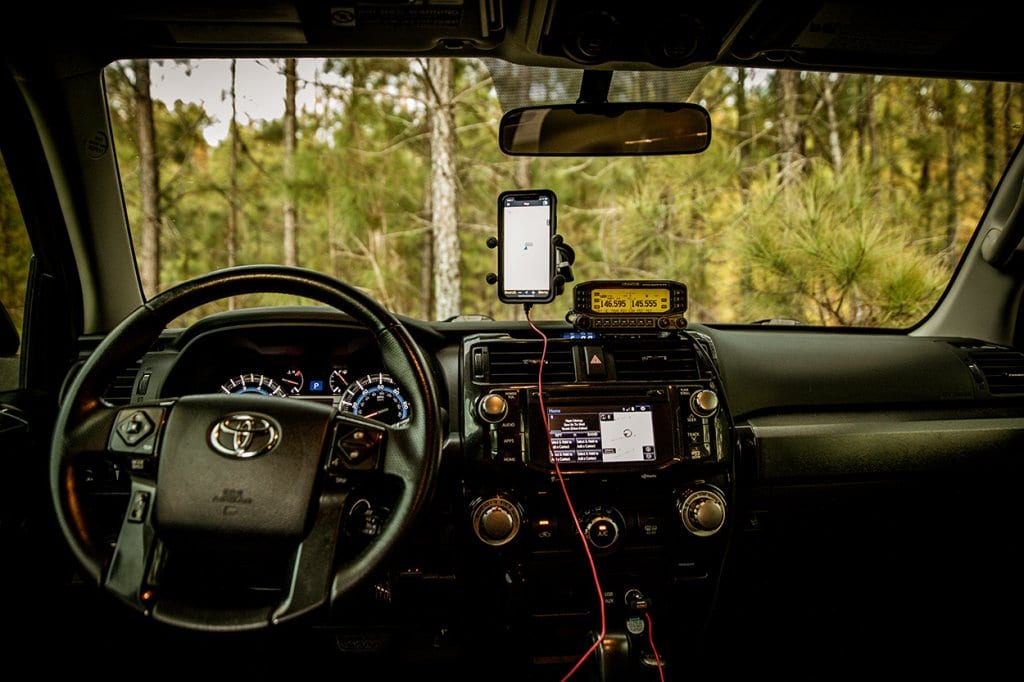 This gives the driver lat/long position (with a grid square option), altitude, speed and direction, and the ability to share the information. You can also access weather information, broadcast beacon transmissions, and messaging between APRS-operating stations. 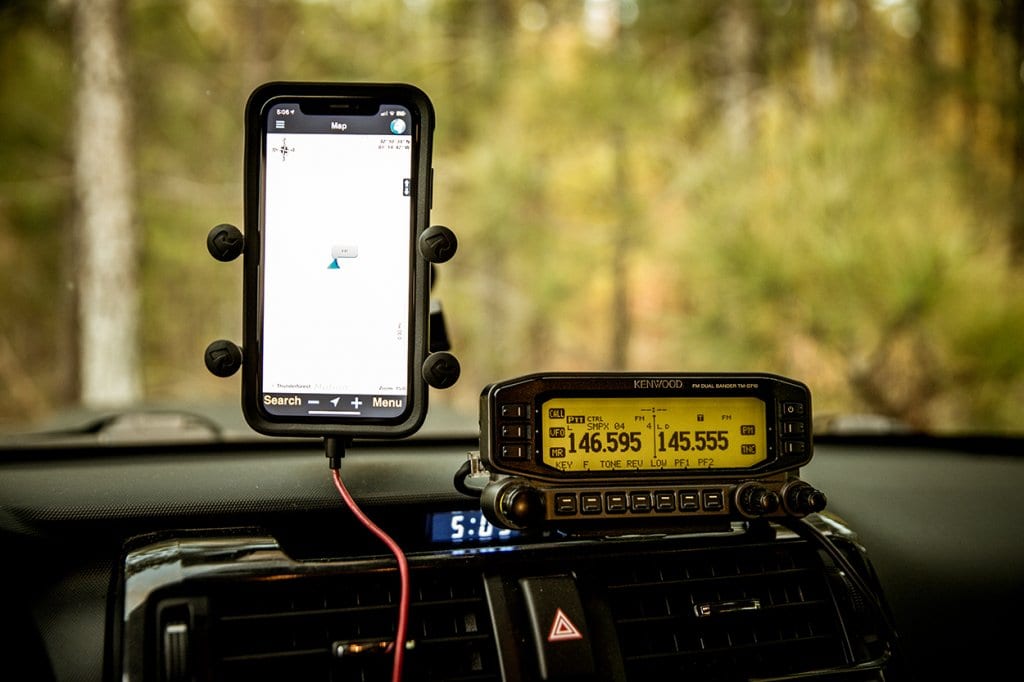 Up in the front, the truck is equipped with a Warn Winch “Zeon 10”. It’s a 12-volt electric winch for vehicle recovery or other uses with a pull capacity of five tons on a 3/8 in. line that can be operated directly or remotely.

You can stow it up against the Hawse Fairleads (see below) or up against the roller. As FActor 55 describes it, the Flatlink E “…provides a means to eliminate the conventional winch hook and replace it with a safer and more secure screw pin shackle resulting in a closed system winching operation.  The large pear-shaped shackle mounting hole allows for attachment to either the pin or bow end of common screw pin shackles, as well as common OEM recovery points.”

“Conventional winch hooks can cut and fray recovery straps and often allow strap ends to escape during momentary slack cycles of a typical winching recovery.  Screw pin shackles do not allow strap loops to escape due to their secure screw pin attachment.   The FlatLink E does not require splicing and is compatible with steel cables or synthetic ropes up to 3/8 inches in diameter.  The cable eye is retained in the FlatLink E by a 5/8 inch diameter 6Al4V Titanium double shear pin and internal snap ring.”

• Hawse Fairleads (also from Factor 55) are an integral part of the system.

The aluminum Hawse Fairlead is CNC machined much thicker than many other fairleads, using USA 6000 series aluminum bar. This provides a larger surface area for the rope to slide against, resulting in less stress on the rope and probably extending the life of the rope itself (depending on the rope and its use of course).

CBI Offroad bumpers, front and back

The front and rear bumper install was the most difficult part of the build-up, as there was a substantial amount of cutting of the stock bumpers to make them align properly with the body panels. Once complete, however, it was well worth the effort.

• Protecting the front is a CBI Bumpers 4Runner Classic Series front bumper. This secures the Warn Winch discussed above and provides a foundation for part of the light system (q.v.). 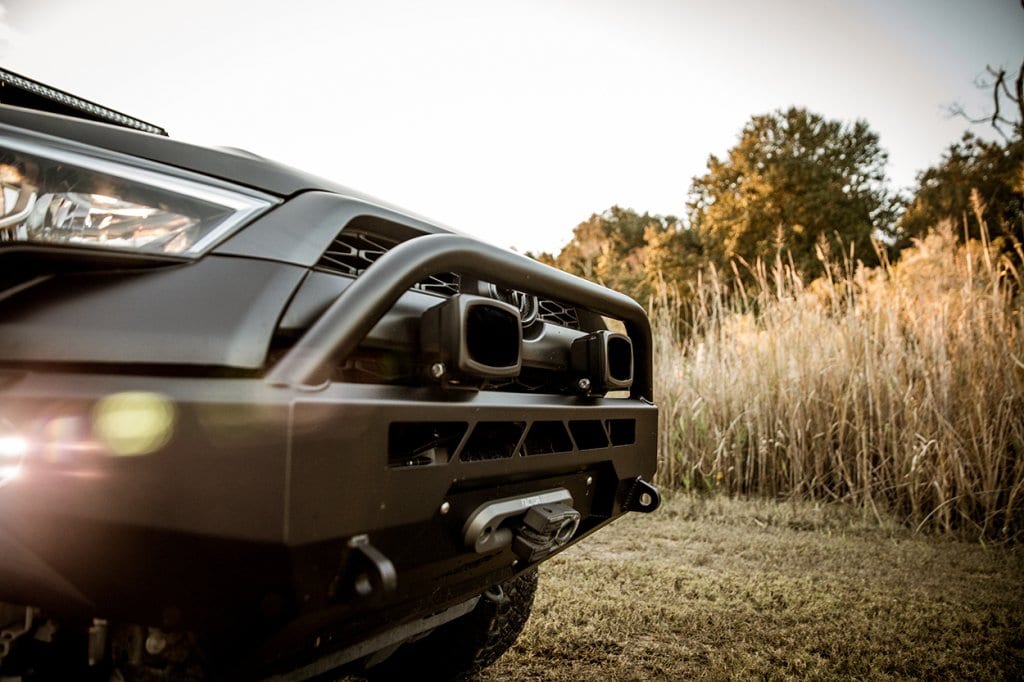 CBI bumpers are on both nose and tail. 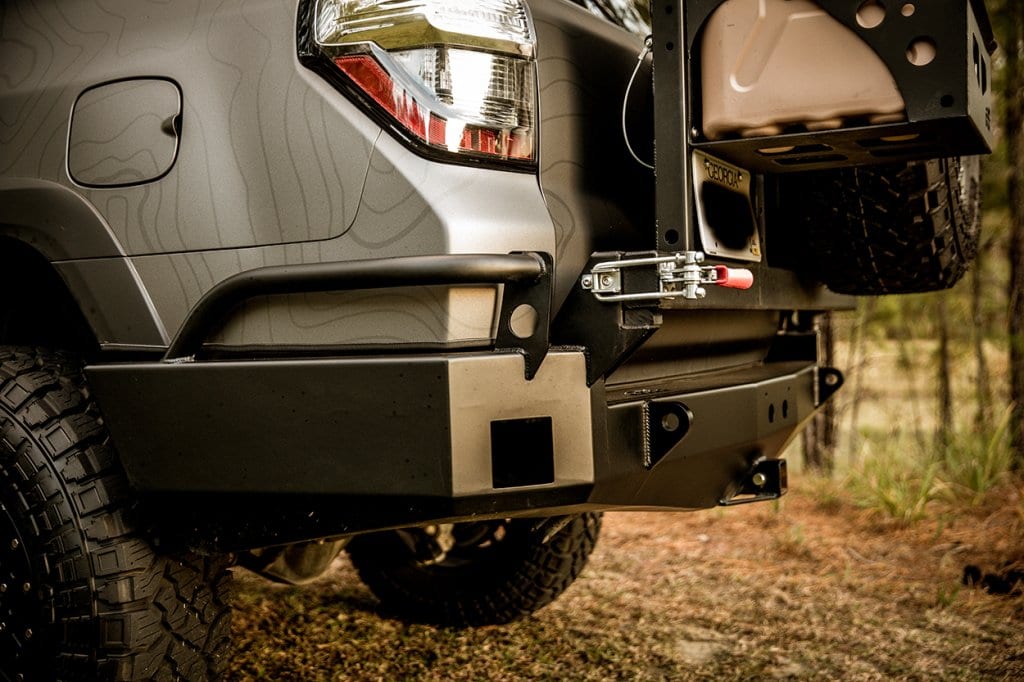 Up top, the rig has a Frontrunner Slimline 2 to stow additional gear, serve as a topside sleeping platform, and provide a solid base for rooftop surfing to the Uncompahgre Gorge.

Extra fuel for contingencies is available thanks to a mounted Rotopax gas can. 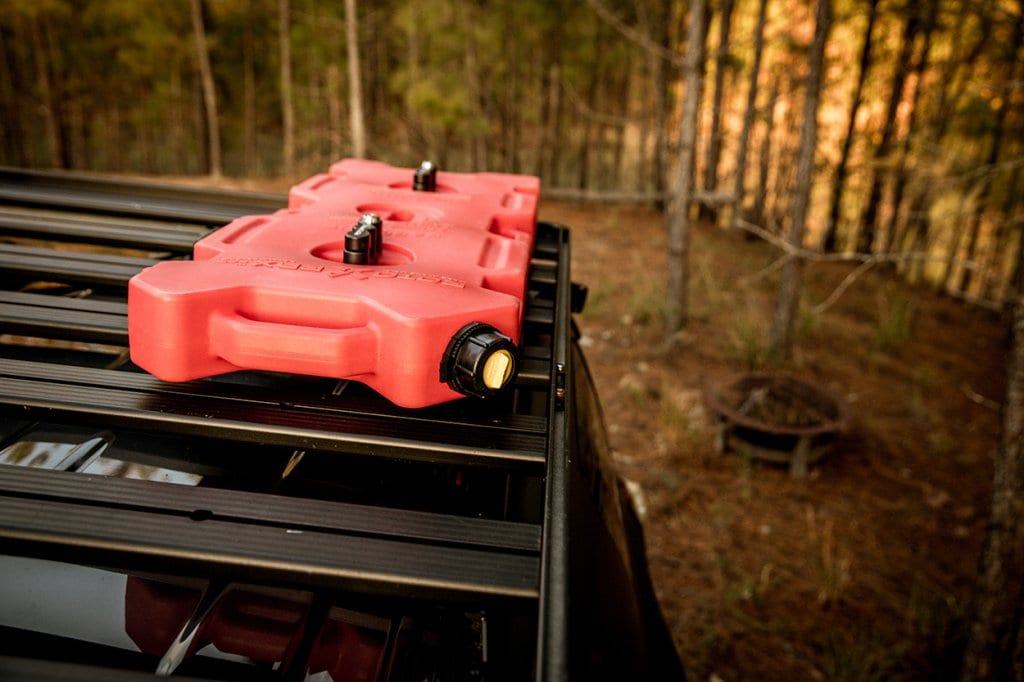 Rotopax on standby in case the truck gets unexpectedly thirsty.

Toyota 4Runner Trail, Down Below

Rock slider options are frequently debated in off-road circles, but not as much as wheels and tires. The following were the choices made for this rig.

For rolling hard and rolling dirty. These Icon alloy wheels were designed to exploit a vehicle’s suspension, steering, and clearance features to maximum effect in offroad conditions. This rig is running on Icon Alloy Alphas in 17 in. satin black. 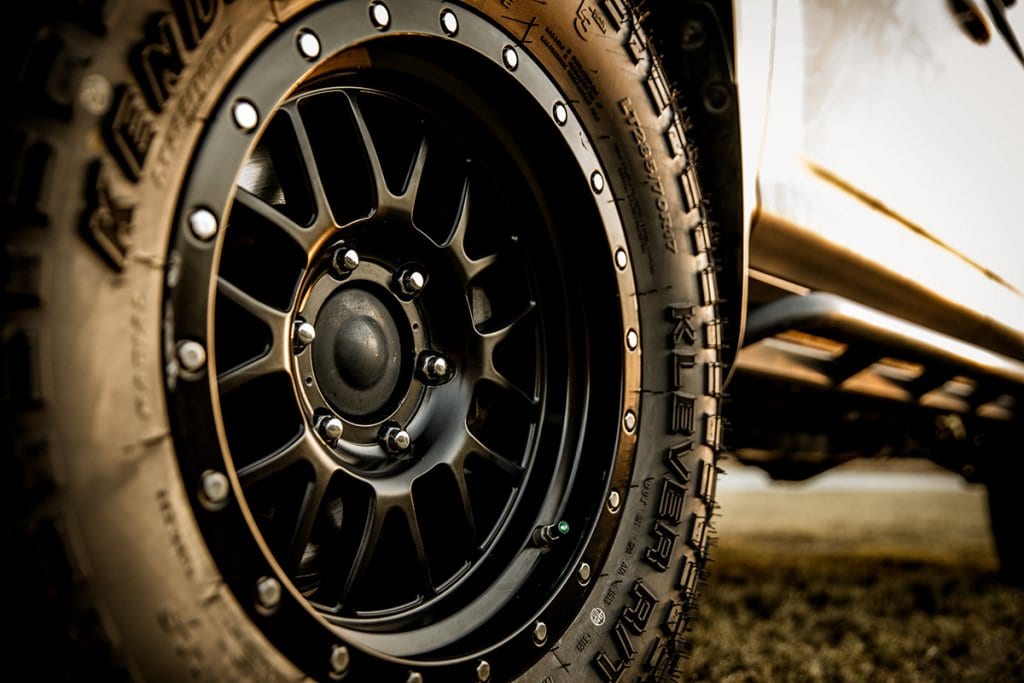 Klever tires from Kenda have a 3-ply sidewall with aggressive upper sidewall tread blocks. They’re good on the road and in the rough, and they’re not too damn loud. If we built a rig like this again, however, we’d probably drop back to a smaller tire size. The 285s are a bit much for it to pull and definitely slow it down. 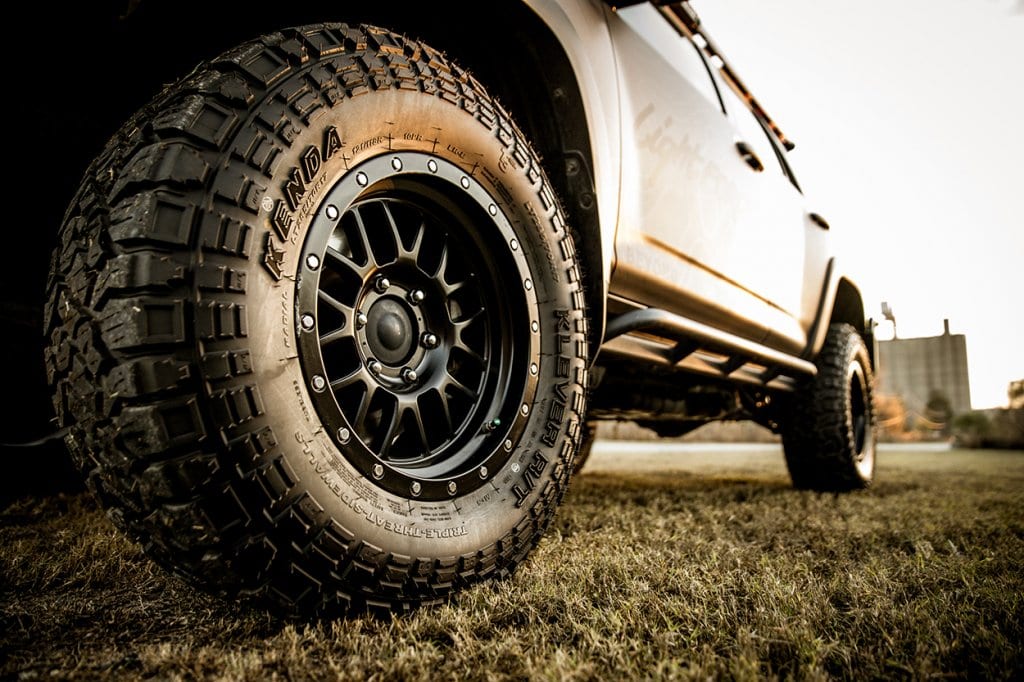 Good lighting is a must if you’re going to do any serious traveling away from good roads and urban areas. This rig’s first lighting addition was a 40 in. nightfall light bar (with dual wattage).

The Nightfall ROK 40 Twin Pack – Spot Beam are a multi-purpose light option added for redundancy (and for use in those contingencies we might have failed to account for).

The IR striker LEDs mounted up front make it so you can drive at night if you have the use of nightvision. It also provides endless entertainment when used to sneak up on your buddies at the campsite by night.

The exact model of Pelican case sometimes changes, but until a permanent weapon storage mechanism is installed, storage security is provided by Pelican cabled locked to the seats or frame.

• 3M topographic map by Beyond Wraps of Santa Ana, California. 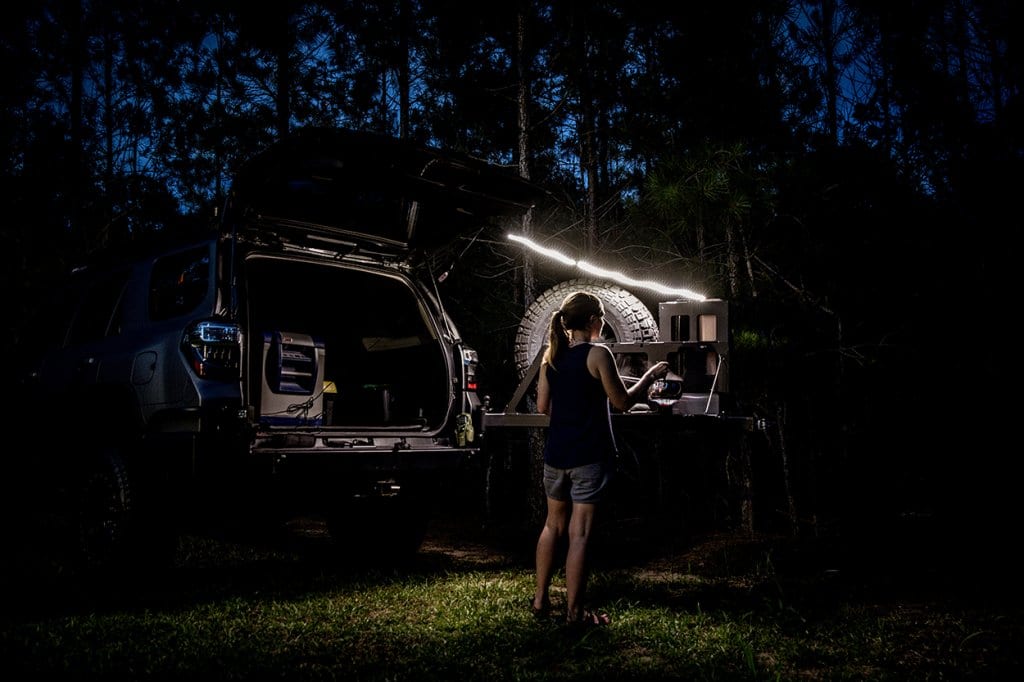 Do you need a Warn Winch, Rotopax, Shrockworks sliders, and similar gear to go truck camping? No, not for mundane use. But it sure is nice to take it out there a ways.

That’s it for today’s installment of Sunday Drive. Have questions or observations? Hit us up in the comments!

Special thanks to Lightforce (@lightforce_usa, /lightforceUSA/) and Kenda Tire (@kendatire, /kendatiresusa/) for their support in organizing the Basecamp Creative Group rig.