You’ve been involved in a defensive shooting — ideally a shooting and not a gunfight. What comes after? What should you do post-engagement? Here’s a hint: it’s not just flipping your head around dramatically in a theatric scan-and-assess. In today’s episode, we discuss what to do after. Though important, situational awareness is necessarily different in every situation. However, to develop the proper mindset Daniel presents his system that if used in the course of training will help you prioritize your post-defensive shooting actions. Mindset, mission, purpose, and mental-emotional preparation can help save your life and protect your loved ones. We’ll talk about that.

Listen to the podcast, or feel free to jump to a specific topic in episode 166…

Defensive Shooting: what comes next?

Should you scan after a defensive shooting?

“I try not to be dogmatic about (this is what you do [after] every time you pull the trigger), you do this exact procedure.

It’s more about trying to find out what the environment is telling me and what the highest priority need is going to be.

The first one is going to be safety, then after that, we look at; do we need to fight more?”

2:34 DS suggests the questions you should be thinking to determine your next priority,

“This threat… does it need more bullets? Is it over? Can I stop shooting to evacuate my child? Is there anything else here that can hurt me?

There’s this idea that you can’t leave the scene and where it came from I don’t know.

[Ask yourself] …what are the highest threats to my safety and what are the avenues to deal with it?

If someone wants to train scans, I’m ok with it, I just encourage people not to do it every single time they shoot.”

Training, mindset…is way more important than where you look around -VF

“You go to an indoor shooting range, and you got these black ballistic walls that are eighteen inches on each side of your head… you’re essentially training yourself to look at nothing, because you know there’s nothing there, and I don’t support that type of training. I don’t think it’s conducive to creating the type of awareness that allows you to prioritize the tasks when you look at the environment.”

“I see it all the time where someone doesn’t know what to do, they’re standing in a vulnerable spot, they’re not in a great location, they just had to shot somebody and they’re looking for the next thing to do, and they can’t figure it out because they’re not receiving any cues.

…Third piece of my thought process is; am I standing in the most survivable location? “

“You need to stop looking for things and start looking at things.”

Ex: [During training] “…If you have to go through a door into a room where they don’t know what’s there. A lot of times they’re expecting to see something there. They’re looking for a bad guy with a gun, this predetermined image in their head. If you get through the door and that’s not what you encounter, your brain has to loop all the way back and re-figure out what you’re looking at. The trip back to that square one would be a lot shorter if you didn’t have an expectation already set.

You [should] go into an open room with an open mind, and you’re looking at what’s in front of you, not looking for something.”

11:17 DS adds;  “Looking for something vs at something results in no-shoot targets getting shot.”

“I’ll put an active shooter in what would be a bank. You got someone in there talking to the banker about a mortgage, you got a couple of people working in there, then an active shooter comes in looking for their estranged wife (or whatever), and one of the scenarios is;

I’ll send in a second shooter. Either an average CCW guy, trying to help but he’s not doing it properly which is fully expected, and then you’ve got officers responding. I’ll use real police in those roles. Then I’ll have civilians in there who just got into an engagement with an active shooter, and now you’ve got a gun coming around the corner at you. Its either going to be; a second bad guy, a second good guy, or a law enforcement officer and if you’re looking for juts a gun, all three of those guys are going to get shot.”

15:19 VF says: “If all you’re doing is going to the range and doing fast draws, working on your draw stroke, putting a lot of rounds downrange, you can shoot great [that’s a good start], but the mindset component can’t be skipped.

Unfortunately, a lot of classes don’t deliver a mindset component because the flashy shooting part, is the most popular part in the industry and it’s the most fun…

DS Creates training with unpredictable elements, foregrounds, and backgrounds, to enforce mindset essentials on the range;

“It’s usually a very big eye-opener for a lot of folks about how many times they didn’t even recognize that there was a target right behind that [other] target, they didn’t clear a foreground or background, or didn’t make the right movement… yes you’re shooting guns, but it’s really just trained thinking in problem solving and mindset”

20:00 VF agrees by adding, “And you shock a lot of people because they actually become shocked by their own behavior, they don’t expect themselves to respond the way they did and realize they weren’t even close to figuring it out.”

“Plans rarely work out when they meet contact.” – DS

24:01 VF says, “I have had some pretty deep experiences with violence myself, numerous times. After a while, if you’ve got what it takes, you begin to develop this ability to rapidly adapt to a situation. What happens is, after the situation starts to unfold into chaos, or a more hostile event, you adapt and using your mindset, you just do your job.

That could be taking all this information in at a super rapid rate. You have all this stuff happening; people running, things are moving, there are bullets flying, all this crazy stuff is happening. Your ability to take that in and process it very often improves over time. In my case it did. I became more comfortable in hostile situations.”

17:25 VF says; “It matters how you conduct your training. And of course, it comes down to anything else, you get what you put into it. If you go there [a square range] invested in “I want to get faster and shoot better,” that’s all you’re going to get if you’re lucky. 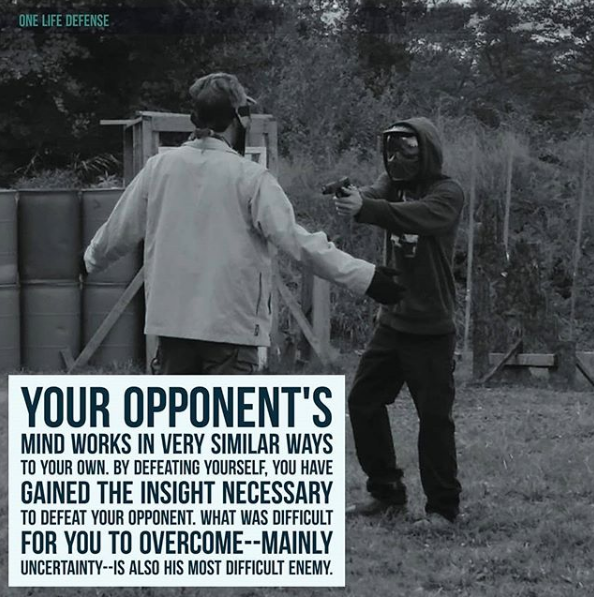 …Or, you get your mind opened up by a good instructor [that teaches you that] the decisions are going to come at you so fast, and sometimes you’re going to have choices between great decisions, good decisions, and sometimes it’s going to be between two bad decisions. That’s just how it goes. Sometimes you have to do that. There are things that you may have to do that are not comfortable, but you have to be able to process those thoughts, while you’re in a super elevated condition, physiologically and psychologically

Check out Daniel’s short story: The First Step, explains what was going on in his head during one of the moments leading up to his first firefight in the Battle of An Nasiriyah, on March 23rd, 2003.